The prognosis of IPF remains poor but the treatment strategies have been established gradually (1). On the other hand, the treatment strategy for idiopathic chronic fibrosing interstitial pneumonia (iCFIP) without IPF has not been established definitively. The diagnosis of iCFIP requires the exclusion of known causes of interstitial pneumonia such as environmental exposures, medication toxicity or connective tissue disease (CTD), because identification of an underlying etiology often impacts treatment and prognosis (2). Recently, the concepts of interstitial pneumonia with autoimmune features (IPAF) has been established, consists of clinical, serological and morphological features of CTD, and is used to identify features suggesting CTD but not to make a diagnosis (2,4). The clinical course of IPAF has been revealed in previous studies (5,6); when patients are diagnosed with IPAF, we may administer immunosuppressive therapy as a first-line treatment depending on the predisposition for CTD. Therefore, as it is substantial to distinguish IPAF from idiopathic interstitial pneumonias, we excluded IPAF from this study.

Immunosuppressive therapies have been used to treat patients with CTD-associated interstitial lung disease (ILD) (7-11). However, in patients with iCFIP, only a few previous studies reported the usefulness of immunosuppressive therapy. In a study by Johnson et al., the findings indicated a survival advantage for patients treated with cyclophosphamide and low-dose prednisolone (PSL) (12). Kondoh et al. reported that cyclophosphamide and low-dose PSL demonstrated a favorable response in fibrosing NSIP (13). In a case report, Nanki et al. reported that the addition of cyclophosphamide to PSL was useful in recovery from NSIP (14). These previous studies researched cyclophosphamide, but the usefulness of cyclosporin A (CsA), which exerts its therapeutic effect by inhibiting calcineurin (15,16), has not been identified clearly. In the present study, to clarify the usefulness of CsA in patients with iCFIP without IPF, we retrospectively examined longitudinal changes in pulmonary physiology.

This retrospective cohort study was conducted at Kurashiki Central Hospital in Japan and was approved by the Ethics Committee of Kurashiki Central Hospital in accordance with the Declaration of Helsinki (approval number 2556, June 27th, 2017). Patients with a multidisciplinary team diagnosis of iCFIP between April 2007 and December 2014 who underwent treatment with CsA for this diagnosis were included. The diagnosis of IPF was based on 2011 American Thoracic Society/European Respiratory Society/Japanese Respiratory Society/Latin American Thoracic Association guideline (1). The diagnosis of NSIP was based on 2013 American Thoracic Society/European Respiratory Society statement and was diagnosed only by pathological features from a surgical lung biopsy (2). Specific collagen vascular disease was diagnosed by a rheumatologist. The diagnosis of IPAF was based on Fischer’s criteria in 2015 (4). Clinical characteristics were ascertained from the available clinical records. The observation period ended in April of 2017. The composite physiologic index (CPI) was calculated as follows: 91.0 – [0.65 × percent predicted diffusing capacity for carbon monoxide (%DLco)] – [0.53 × percent predicted forced vital capacity (%FVC)] + [0.34 × percent predicted forced expiratory volume in 1 second (%FEV1)] (17).

The longitudinal trajectories of %FVC, %DLco, and CPI before and after treatment with CsA were the primary outcomes. Linear mixed-effects models with random slopes and intercepts were used to evaluate changes in %FVC, %DLco, and CPI, positing piecewise linear trajectories in time, with change points at the initiation of CsA treatment. All models were adjusted for potential confounders: age, sex, and smoking history. Patients who were treated with PSL up to 20 mg/day or who were switched from another drug to CsA were included in the analysis. Based on the linear mixed-effects models for CsA, the effects of treatment on changes in lung function after 2 years of treatment were estimated as the net difference in the observed change and the counterfactual change that would have been expected if CsA treatment had not been initiated. This net treatment effect was calculated as the yearly rate of change at initiation. All statistical analyses were performed using R (The R Foundation for Statistical Computing V.3.4.0). Statistical significance was defined as P<0.05.

Data from 220 patients who received treatment with CsA to ILD at our hospital between April 2007 and December 2014 was obtained from the hospital’s database. ILD other than iCFIP, including acute onset interstitial pneumonia (n=101), IPAF (n=12), CTD associated ILD (n=5) and other disease (n=21), were excluded in this study. Moreover, combined treatment with high-dose PSL over 20 mg/day (n=22), insufficient lung function data (n=23) and discontinuation of CsA at early stage (n=3; two had liver damage within 30 days and one had an infection within 60 days) were excluded in this study. Thus, 33 iCFIP patients treated with CsA combined with or without low-dose PSL were included in this study. The clinical characteristics of the patients are shown in Tables 1 and 2. The median age was 66 years and 20 (61%) patients were men. The median %FVC and %DLco values were 70.6% and 50.2%, respectively. The median CPI was 46.9. A high proportion (94%) underwent bronchoalveolar lavage (BAL) and the median lymphocyte differential count was 14%. Seventeen (52%) patients underwent a surgical lung biopsy and 11 (33%) patients were diagnosed with NSIP. All patients were treated with combined CsA and low-dose PSL, and the median PSL dosage was 10 mg/day. 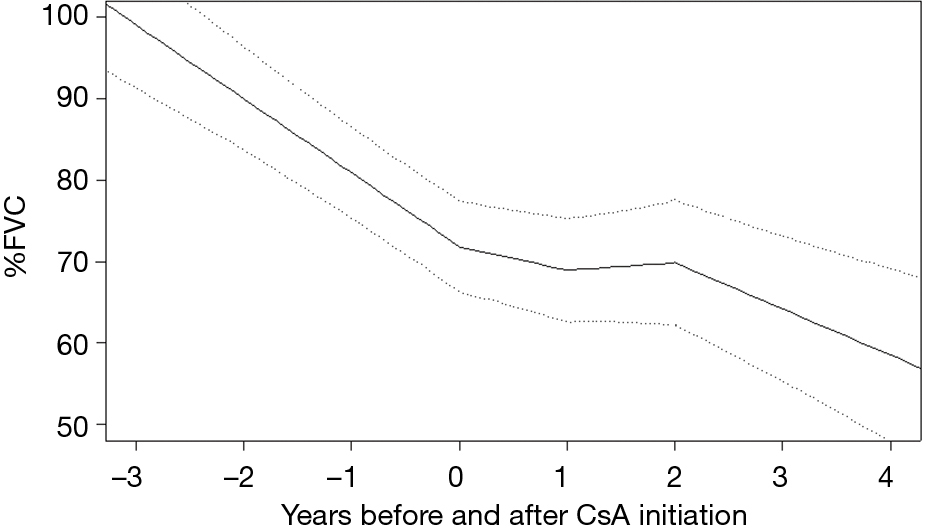 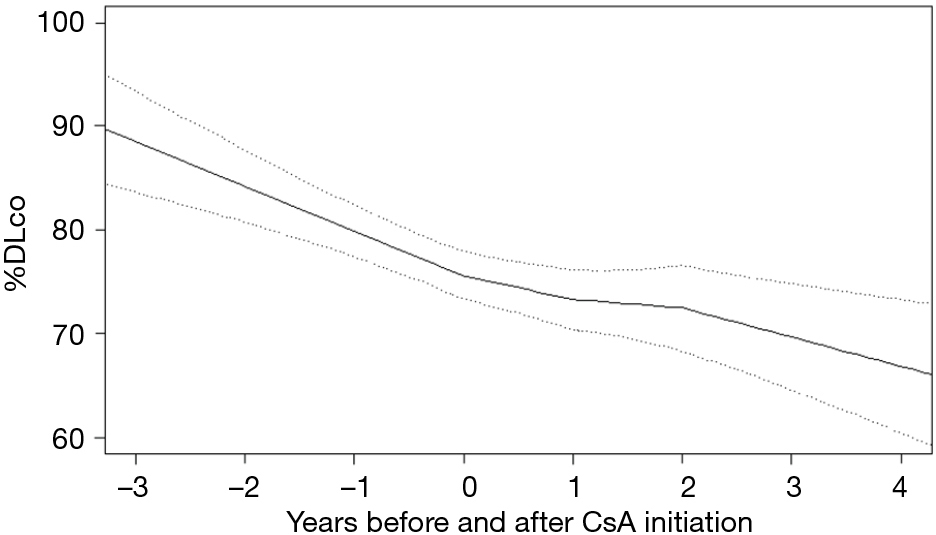 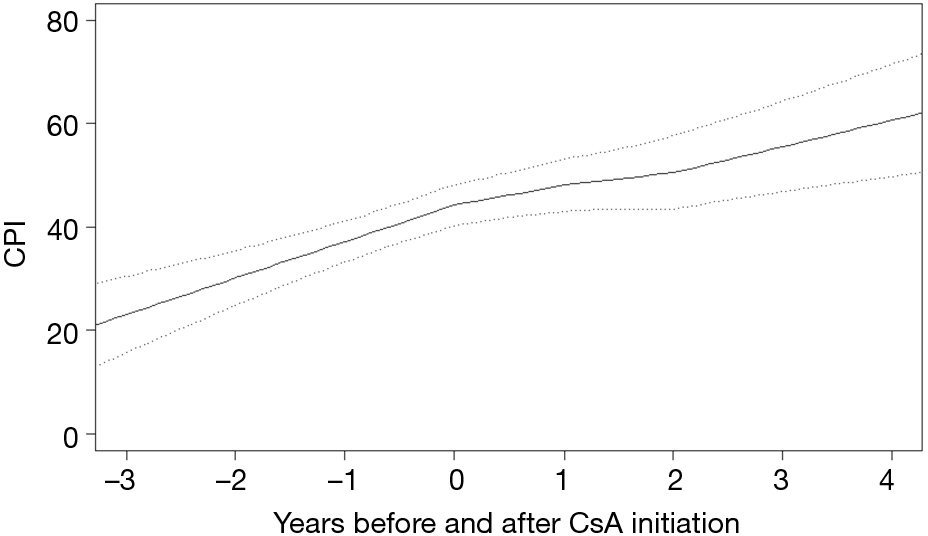 The median duration of CsA use was 61 weeks (interquartile range, 45–178 weeks) and the median daily dose of CsA was 120 mg (interquartile range, 100–160 mg). CsA was well tolerated overall and was discontinued because of an adverse effect in only one patient (3.0%). The reason for discontinuing CsA was renal dysfunction; after CsA was discontinued, the patient’s renal dysfunction improved.

In this study, we demonstrated that CsA treatment for patients with iCFIP without IPF was associated with improved %FVC, %DLco, and CPI values for 2 years. CsA was well tolerated with appropriate concentration adjustments. To our knowledge, this is the first study to describe the effect of CsA on the clinical course of iCFIP without IPF.

We showed the treatment of CsA in patients with iCFIP improved %FVC, %DLco, and CPI values for 2 years. The mechanism of CsA’s action is inhibition of the action of calcineurin and completely blocking the translocation of the cytosolic component of the nuclear factor of activated T cells; then, this pathway inhibits the production of interleukin-2, interleukin-4, the CD40 ligand, and interferon γ (15,16). P-glycoprotein, encoded by the multidrug resistance-1 gene and expressed on the lymphocyte surface, reduces intracellular concentrations of glucocorticoids and results in resistance to glucocorticoids (20). CsA acts antagonistically to P-glycoprotein and improves resistance to glucocorticoids by recovering intracellular glucocorticoids levels in lymphocytes (21,22). The mechanism of action of CsA on iCFIP still has not been elucidated but the immunosuppressive effects may result in improvements of iCFIP. Furthermore, in this study, all patients were treated with CsA in combination with low-dose PSL and this may have supported the effects of CsA.

It is difficult to predict the effective concentration of CsA from the dosage of CsA; the importance of measuring blood level concentrations of CsA has been reported (18,23,24). The C0 value has been used as an indicator of safety, but did not necessarily correlate with the effectiveness of CsA (18). Recently, the AUC0-4 was reported to predict the effectiveness of CsA (23) and the C2 value showed a good correlation with the AUC0–4 (18,24,25). In this study, we initially measured C0, C1, C2, and C4 and adjusted the dosage of CsA by calculating the AUC0–4 to obtain an adequate concentration of CsA and avoid adverse effects. Furthermore, the concentration of CsA is unstable (24). In patients with dermatomyositis and polymyositis-associated ILD, stabilization of the CsA blood concentration was reported to be a good predictor of a therapeutic response (9). Therefore, it may be important to measure the concentration of CsA routinely. In outpatients, the measurement of only C2, which is strongly associated with the AUC0–4, was simple and minimally invasive. To obtain efficacy while avoiding an overdose of CsA, we measured C2 and adjusted the dosage if necessary. Our fine adjustments of the CsA concentration may have resulted in good efficacy and few adverse effects.

BAL provides useful information for the diagnostic evaluation of patients with suspected ILD and BAL differential cell profile frequently helps the clinician narrow the differential diagnosis in ILD. A BAL fluid lymphocyte differential count with greater than 15% indicates BAL lymphocytosis (26). We performed BAL in almost all patients (94%) and the median BAL fluid lymphocyte differential count was 14%. This result may suggest the possibility that the therapeutic responses to the corticosteroid were poor, and showed the validity of not introducing high-dose PSL treatment for the patients in this study. Furthermore, we showed good treatment responses with low-dose PSL and CsA for patients with iCFIP. CsA treatment may be indicated when a response to PSL therapy is unlikely. Prospective, randomized trials are needed to validate the effectiveness of CsA for iCFIP.

There are limitations in this study. First, it was a single-center retrospective study and the number of patients was small. However, we believe this was an advantage in the evaluation of patients’ characteristics such as the iCFIP diagnostic process and treatment strategies including adjusting the blood concentration of CsA. Second, the outcomes included three patients who gradually decreased and discontinued CsA to avoid adverse effects from long-term CsA use over 2 years, although the effect of CsA continued. However, this factor likely worsened the results, and if it was excluded, we believe that better effects may have been demonstrated from CsA. Third, we included patients treated with PSL in combination with CsA in this study. It may contribute to the efficacy of CsA alone. However, we limited patients treated with only low-dose PSL, and we excluded patients treated with high dose PSL over 20 mg/day. Moreover, although the efficacy of low-dose prednisolone to iCFIP has not been reported, one previous study reported that about 50 mg of PSL was used to treat NSIP (27). Therefore, we though the efficacy of low-dose PSL was too limited. Last, surgical lung biopsy was only performed in 52% of the patients in this study. Needless to say, we excluded known entities associated with the development of pulmonary fibrosis such as CTD and chronic hypersensitivity pneumonitis.

Conflicts of Interest: T Ishida has received honoraria from Taisyo-Toyama Pharmaceutical Co., Ltd., Pfizer Japan Inc., and MSD K.K. The other authors have no conflicts of interest to declare.

Ethical Statement: The study was approved by the Ethics Committee of Kurashiki Central Hospital in accordance with the Declaration of Helsinki (approval number 2556, June 27th, 2017). They waived informed consent because of the retrospective nature of the medical record review.