Video-assisted thoracoscopic surgery (VATS) is now recognized as the standard treatment of early staged lung cancer due to improved postoperative recovery and equivalent oncological efficacy as compared to the conventional open approach (1,2). However, its use in locally advanced lung cancer has not been adopted by the majority of thoracic surgeons. Technical challenges and the concern on insufficient lymph node dissection are the main obstacles to the application of VATS in this group of patients (3).

Robot-assisted thoracoscopic surgery (RATS) as a rapidly developing, next-generation, minimally invasive technique, has recently gained increasing popularity. The robotic platform has several technical advantages over VATS, including three-dimensional operative view, intuitive use of the robotic hands, and more flexibility of the instruments. It therefore has the potential to surpass VATS in handling more difficult cases (4,5). Although the feasibility of RATS in locally advanced non-small cell lung cancer (NSCLC) has only been evaluated in limited retrospective studies (4-6), it is believed this technique may promote the use of minimally invasive surgery in these patients in the near future.

Since 2009, over 1,000 lung resections have been performed by our team using the da Vinci S robot system (7,8). Here, we report a representative case accompanied by a surgical video to share our experience in managing locally advanced N2 NSCLC using a three-arm RATS approach.

After admission, all patients undergo standard evaluation for operability of the tumor. If presence of stage III (N2) disease is suspected, patients usually require a whole-body PET-CT scan and an endobronchial ultrasound guided fine-needle aspiration biopsy (EBUS-FNA) for staging. These cases will then be discussed by a multi-disciplinary team for appropriate treatment modalities.

The presenting case was a 65-year-old gentleman with a heavy smoking history (with 800 cigarette-years, who quit 2 weeks prior to the admission). He also had histories of hypertension, atrial fibrillation and coronary artery stent implantation. Contrast chest CT showed a right upper lobe mass (Figure 1) with enlarged hilar (10R) and mediastinal lymph nodes (2R and 4R). Preoperative lung functions were moderately impaired (FEV1% and DLCO% were 80.7% and 82.7%, respectively). The patient was diagnosed as clinical T1N2M0 adenocarcinoma by CT-guided biopsy and PET-CT, but he refused to take EBUS-TBNA or inductive chemoradiotherapy due to the fear of disease progression, so surgery was planned. As an eligible case, this patient was enrolled in a randomized trial comparing RATS to open surgery in stage II–IIIA NSCLC that is currently running in our institution, and was assigned to the RATS group before the operation. A right upper lobectomy with systematic lymph node dissection was performed. Post-operative recovery was uneventful and the patient was discharged 4 days after the surgery. The final pathology confirmed the diagnosis (adenocarcinoma, pT1N2M0, stage IIIa) so adjuvant chemotherapy was prescribed. At 12-month follow-up, there was no sign of recurrence. 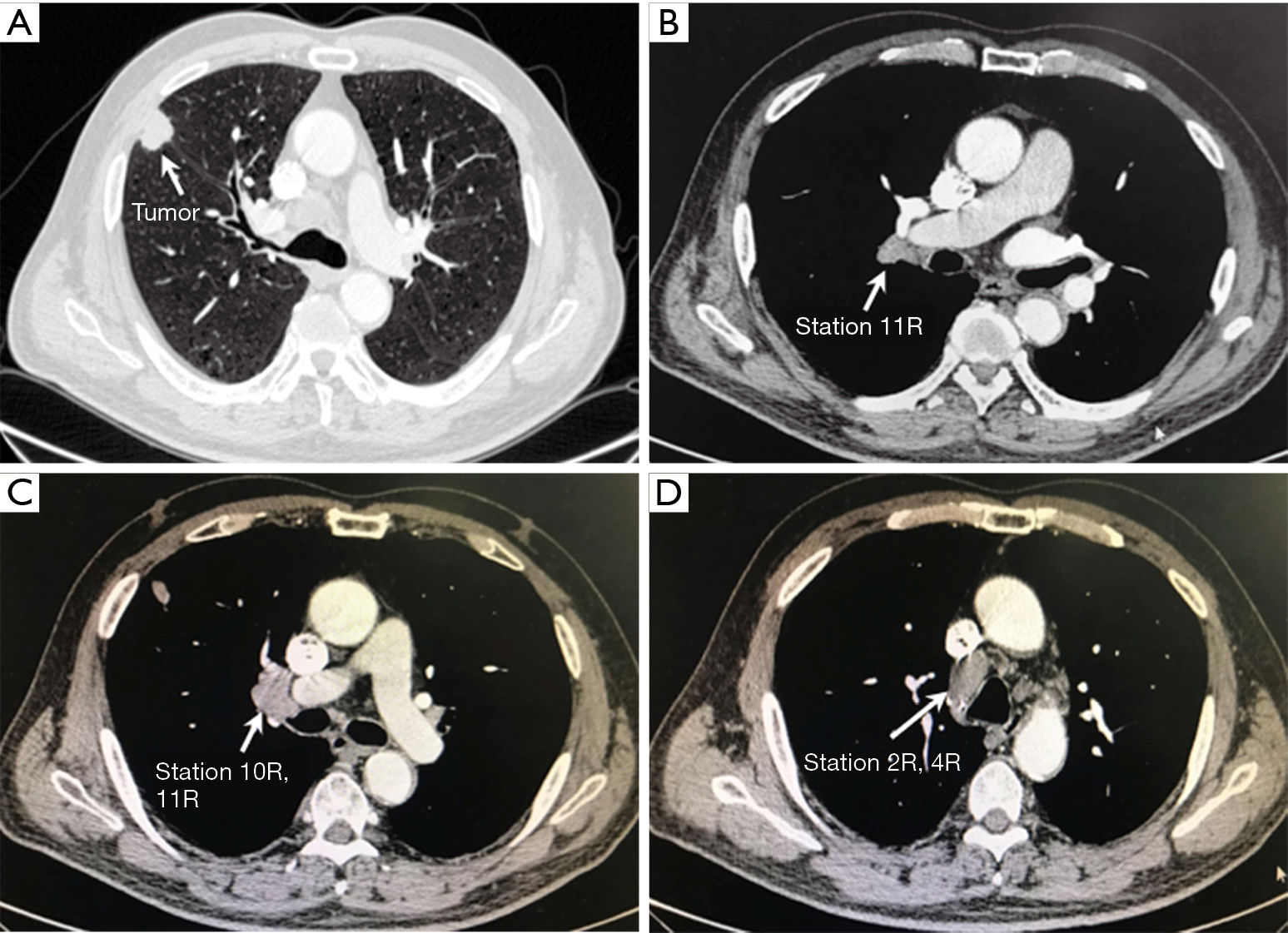 Figure 2 Ports positions of the three-arm approach (A). The camera port for right upper lobectomy is placed in the 7th intercostal space at the post-axillary line and two-arm ports are 8–10 cm away from the camera ports. For docking, the patient is placed in the lateral decubitus position straight to the robot (B).

After intubation, the patient is placed in the lateral decubitus position with his/her head straight toward the robot. Firstly, a camera port (12 mm) is placed in the 7th (for upper lobes) or 8th (for lower lobes) intercostal space at the post-axillary line. A 30° camera is then used to explore the pleural cavity. If there is no severe adhesion or metastasis and the lung deflates well, 2 other arm ports (8 mm) are then introduced both anteriorly and posteriorly to the camera port. The arm ports are usually at the same level to, or slightly above the camera port, and an 8-10 cm inter-port distance is required to avoid instrument interference. A utility incision of 3 cm is then placed in the 4th intercostal space in front of the anterior border of the latissimus dorsi. Once all trocars are in position, we start docking the robot which normally takes 3–5 minutes. For the three-arms approach, a fenestrated clamp is inserted through robotic arm 1 (surgeon left hand) and a cautery hook is inserted through arm 2 (surgeon right hand). For the smoothness of the operation, we prefer not to change these instruments during the surgery. Sponge forceps, staplers and clips are introduced through the utility incision by a bedside assistant.

In most cases, the operation starts from the dissection of the subcarinal lymph node stations and then proceeds in a posterior to anterior “single direction” manner to avoid repeated lung flipping.

For right upper lobectomy in cases like this (Figure 3), the lower lobe is first retracted anteriorly. Subcarinal pleural is opened from the upper border of the inferior pulmonary vein to the azygos vein along the esophagus and the intermediate bronchus. All lymph nodes (station 7 and 8) in the subcarinal region are removed in an “en-bloc” fashion and both the left and right bronchus and pericardium are exposed clearly after dissection. 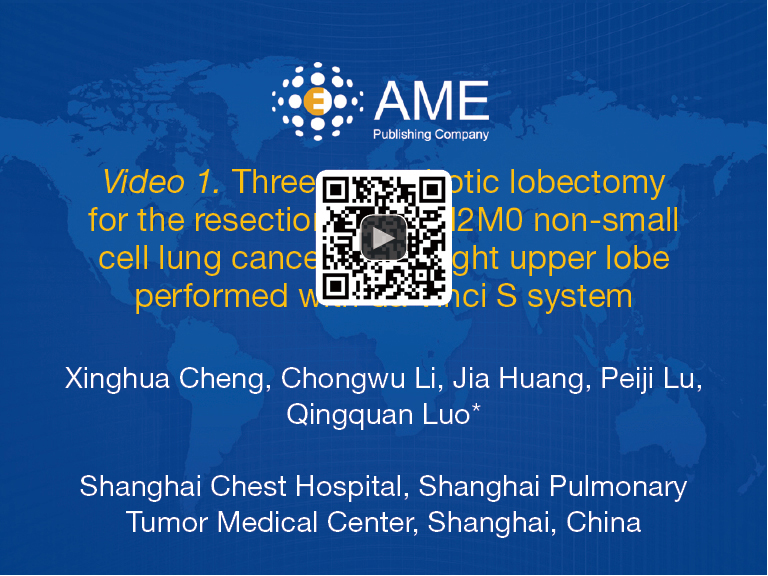 After completion of the bronchus, the upper lobe is retracted to the apex by clamping the bronchus stump, and the hilar lymph nodes (station 10) are carefully removed. During this process, the posterior side of the truncus branch and the superior pulmonary vein are also dissected. The upper lobe is then retracted posteriorly to expose the anterior hilum. Both the superior truncus branch and superior pulmonary vein are further isolated anteriorly. A tunnel was made from the space underneath the inferior border of the vein to the interlobar space for the division of horizontal fissure by staplers. After completion of the horizontal fissure, the arteries and veins to the upper lobe are divided together by staplers and the upper lobe is retrieved using a specimen bag.

Locally advanced NSCLC represent a mixed group of cancers and local treatments are critical for these patients. Although reported oncological outcomes vary in different studies (5-year overall survival 30–45%) (10-12), radical surgery is still considered the most effective modality for these patients. However, whether surgery can truly bring clinical benefits to this group of patients largely depends on surgical morbidity and completeness of the resection (10,13). Particularly, in patients with nodal involvement, complete dissection of lymph nodes has been shown to be related with a reduced local recurrence rate and a better survival (13).

Patients with stage III NSCLC are generally more fragile and usually have systemic treatment prior to the surgery. Therefore, thoracoscopic surgery, which reduces surgical morbidity and accelerates post-operative recovery (1,2), should be a better option for these patients than open surgery. However, dissection in these patients, especially those with enlarged nodes, is more challenging using VATS; thus, safety and completeness of the surgery may be compromised. These concerns impede the diffusion of VATS in patients with more advanced disease.

With better vision, more maneuverability and more static movement, the ability of RATS in fine manipulation and lymph node dissection has been greatly improved. It has been shown that robotic technique may be associated with higher nodal upstaging rate than VATS in patients with clinical stage I NSCLC (14,15). Evidence on the application of RATS in locally advanced NSCLC is also accumulating. Cerfolio et al. recently reported a 5-year survival of 62% for patients with Stage IIIa NSCLC after robotic lobectomy and 73% for those with N2 disease (5). In another multi-institutional retrospective study by Veronesi et al., resections of pstage IIIa lung cancer by RATS yielded similar oncological results (3-year overall survival 61% and local recurrence rate 8.5%) to the open approach (4). The conversion rate was 9.9%, which is lower than that reported for VATS previously (6,16). Despite these encouraging early results, further validation by prospective studies is still required.

In the current article, we showed a three-arm robotic lobectomy for clinical N2 NSCLC. This technique has been verified in our institution and the operational outcomes are satisfactory (7). Previously, Veronesi et al. described a four-arm approach for the resection of locally advanced NSCLC and the specimens were removed from an additional utility incision (17,18). The reasons why we used the three-arm approach are: (I) additional arms and instruments add extra cost to the total surgical expense in our hospital; (II) only 4 incisions are made including the utility incision; and (III) no dislodgment of the instrument arms is needed in this procedure. Nevertheless, as robotic stapler currently is not available in China, it needs to be noted that all staplers are inserted from limited angles through the utility incision. To avoid excessive tension during division, vessels must be sufficiently mobilized; thus, we attempted to transect the bronchus first in order to facilitate lung retraction.

In conclusion, radical resection of locally advanced lung cancer by RATS is feasible and the ability to handle difficult lymph nodes is significantly enhanced. With the progression of robotic technology, the future of minimally invasive technique in patients with more advanced NSCLC is promising.

Funding: This work was supported by the Shanghai Hospital Development Center Grant (SHDC12016113) and National Natural Science Foundation of China (81502480).