Here, we describe the thoracoscopic procedures and surgical results of extended mediastinal LND involving transection of the arterial ligament for treatment of potentially node-positive left NSCLC. This technique offers a wide thoracoscopic view of the bilateral paratracheal and subcarinal spaces and facilitates detection of lymph node micrometastases in selected patients with cancer of the left lung and potential node involvement.

This retrospective study was conducted at Jichi Medical University, Tochigi, Japan, and Jichi Saitama Medical Center, Saitama, Japan, from September 2008 through November 2015. Data were collected from the medical records of 75 patients who had undergone arterial ligament transection (ALT) during mediastinal systematic nodal dissection via video-assisted thoracoscopic surgery (VATS) for potentially node-positive clinical stage I NSCLC. This study was approved by the institutional review board of Jichi Medical University (No. 17-056). Informed consent was obtained in the form of opt-out on a website for the study.

The patients with clinical stage I NSCLC, as categorized by the criteria included in the 7th Edition of the International Association for the Study of Lung Cancer (3) were enrolled in this study. Clinical stage was determined on the basis of preoperative chest computer tomography (CT) findings. All patients underwent positron emission tomography (PET)-CT before surgery. Potentially node-positive stage I NSCLC was diagnosed when at least one of the following factors was present:

Patients were placed in a right lateral decubitus position. All surgeries were successfully performed by 5-port-access thoracoscopic surgery with a rigid 45° scope. After anatomical lung resection (segmentectomy or lobectomy) and systematic LND of the hilar, mediastinal lymph node stations 3a, 5, and 6 (zone 1), the arterial ligament was exposed and dissected with an ultrasonic energy device. The main operator performed en bloc dissection of the lymph nodes around the carina (zone 2: stations 2L, 4L, and 7) while an assistant maintained a wide aorticopulmonary window (Figure 1). 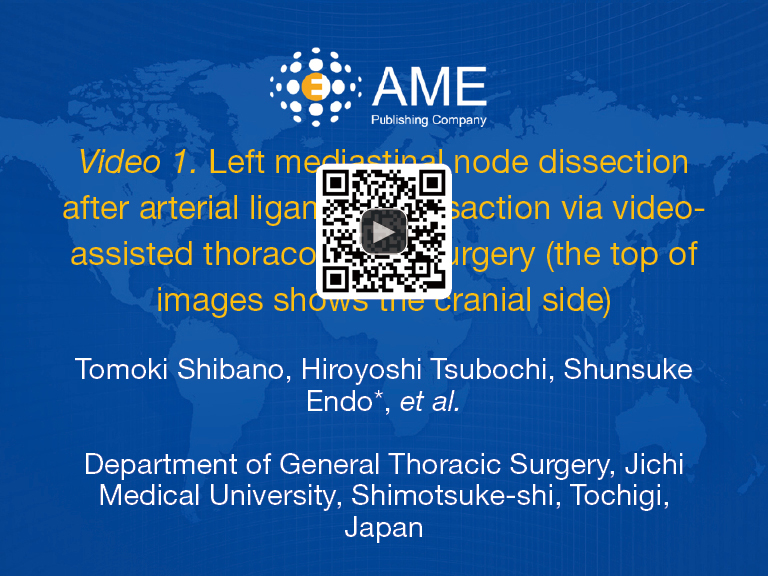 Figure 1 Left mediastinal node dissection after arterial ligament transaction via video-assisted thoracoscopic surgery (the top of images shows the cranial side) (4). The patient was a 71-year-old man with left NSCLC. Clinical staging was T1bN0M0, serum CEA concentration was 6.7 ng/mL, and PET-SUV was 14. The patient was placed in the right decubitus position under general anesthesia. Three ports were placed at the 5th intercostal space, one at the anterior axillary line at the 3rd intercostal space, and one at the posterior axillary line at the 7th intercostal space. The procedures were successfully performed under 5-port-access thoracoscopic surgery using a rigid 45° scope. The interlobar pulmonary artery is exposed. The mediastinal pleura is opened along the phrenic nerve with scissors and marked with rubber tape. The hilar lymph nodes are dissected, and the superior vein, left upper bronchus, and anterior segmental artery (in that order) are divided with an automatic suturing device. After completion of the left upper lobectomy, the anterior mediastinal lymph nodes (station 3a, 5, 6) are dissected along with left thymic tissues. The aortic arch, left brachiocephalic vein, and left phrenic and vagal nerves are identified during the dissection. The arterial ligament is taped and transected with a harmonic scalpel (Ethicon Endo-Surgery, Cincinnati, OH, USA). Lymph nodes are dissected from the left main bronchus, cranially, to the bifurcation of the pulmonary artery by ventrally towing the left main pulmonary artery. When necessary, scissors and hemostatic clips are used around the recurrent nerve, to avoid paralysis. The mediastinal site of paratracheal lymph nodes is dissected until the left edge of superior vena cava, and the frontal section of the carina is completely exposed. The right trachea-bronchial lymph nodes are then dissected. The cranial side of subcarinal lymph nodes is separated from the carina by caudally towing the left main pulmonary artery. The left atrium, bilateral main bronchus, and esophagus are located at the peripheral edge of the subcarinal lymph nodes. Subcarinal dissection is completed by cranially towing the left main pulmonary artery. Operative time was 215 minutes, and blood loss was 165 mL. Pathological analysis confirmed adenocarcinoma with invasion of the visceral pleura. Sixty lymph nodes were dissected, but no metastases were identified. Postoperative course was uneventful, and the patient was discharged on day 10 after surgery. NSCLC, non-small cell lung cancer; CEA, carcinoembryonic antigen; PET, positron emission tomography; SUV, standardized uptake value. Available online: http://www.asvide.com/article/view/29193

The numbers of dissected and metastatic lymph nodes were counted by the surgeons and pathologists. Pathological diagnoses were made by at least two pathologists. TNM staging was determined by using criteria specified in the 7th Edition of the International Association for the Study of Lung Cancer.

Statistical analyses were performed with the SPSS statistical software package (version 25.0, IBM, Armonk, NY, USA). Differences between groups were evaluated with the two-sample t-test, for continuous variables, and the Chi-square test, for categorical variables. Overall survival (OS) was evaluated by Kaplan-Meier analysis, and differences between groups were analyzed with the log-rank test. A P value of 0.05 or less was considered to indicate statistical significance.

Thirty-seven men and 38 women were included in the analysis (mean age 63.4±7.3 years) (Table 1). Left upper lobectomy was the most frequent surgical procedure performed (n=57), followed by left lower-lobe lobectomy (n=15) and segmentectomy (n=3). Mean operative time was 238±58 minutes and intraoperative blood loss was 179±162 mL (Table 2). There were no intraoperative complications related to ALT. Twenty-four postoperative complications occurred in 19 patients. The most frequent was hoarseness due to recurrent nerve paralysis (n=11), followed by arrhythmia (n=7), pneumonia (n=2), emboli of the superior mesenteric artery (n=1), empyema (n=1), chylothorax (n=1), and prolonged air leak (n=1). There were no in-hospital deaths (Table 3). Eight of the 11 patients (72.7%) with hoarseness recovered during follow-up (Table 2). Routine bronchoscopy was performed for every patient on 7th postoperative day, because ischemic bronchitis was at high risk for extended LND. Thus, median duration of hospitalization was 12 days. Duration of hospitalization was 33, 75, and 132 days for patients with empyema, pneumonia, and emboli of the superior mesenteric artery postoperatively, respectively. 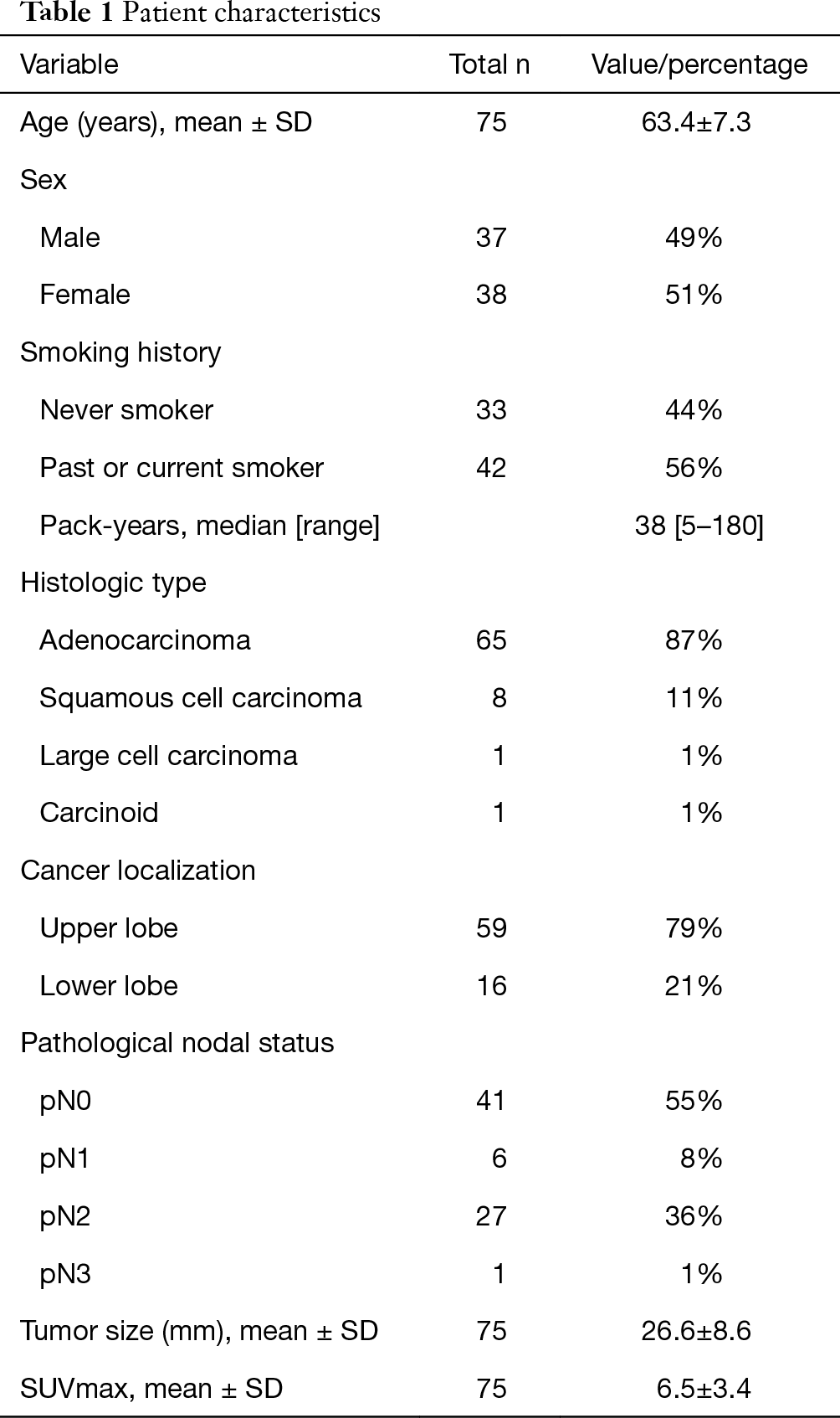 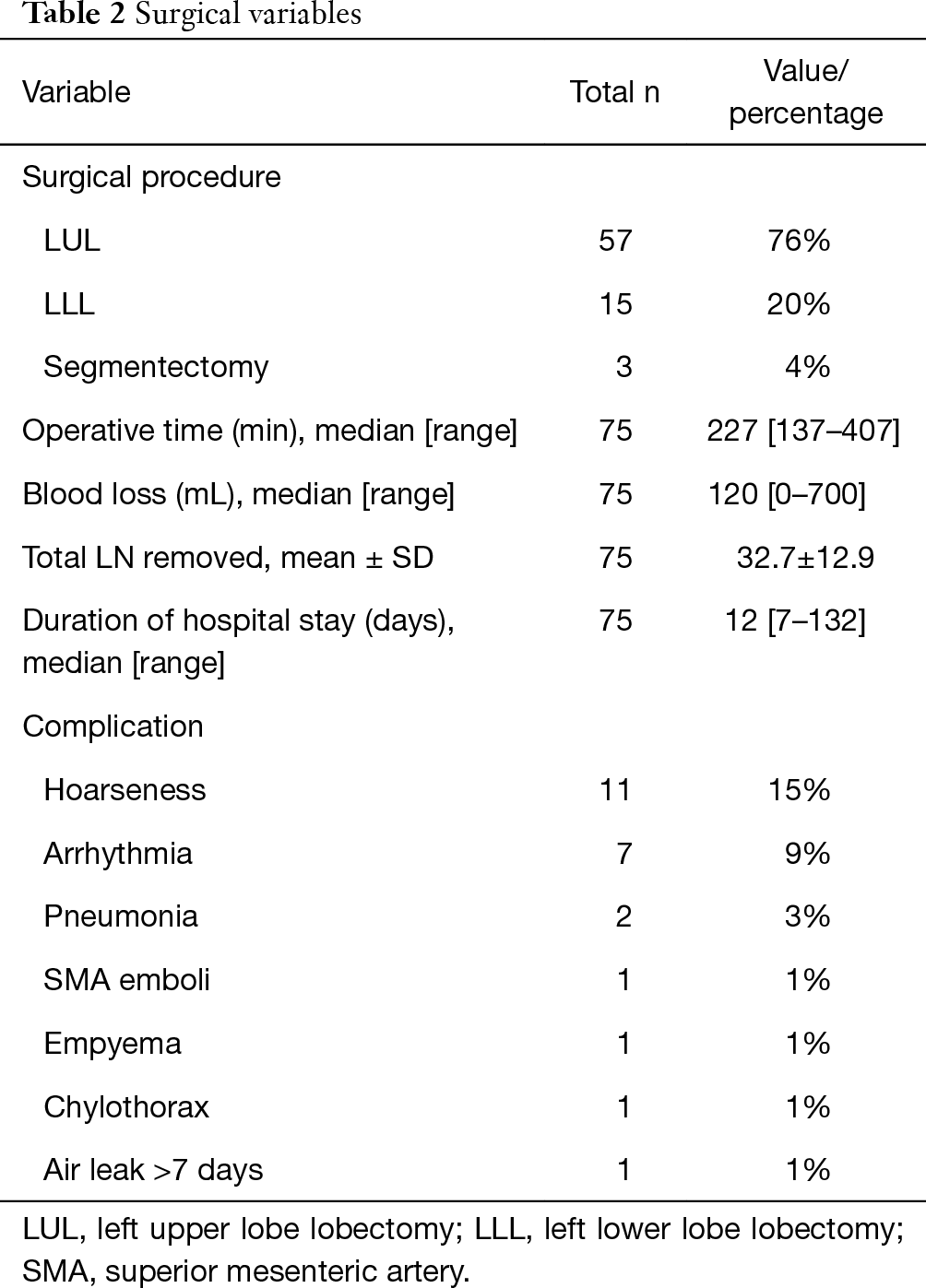 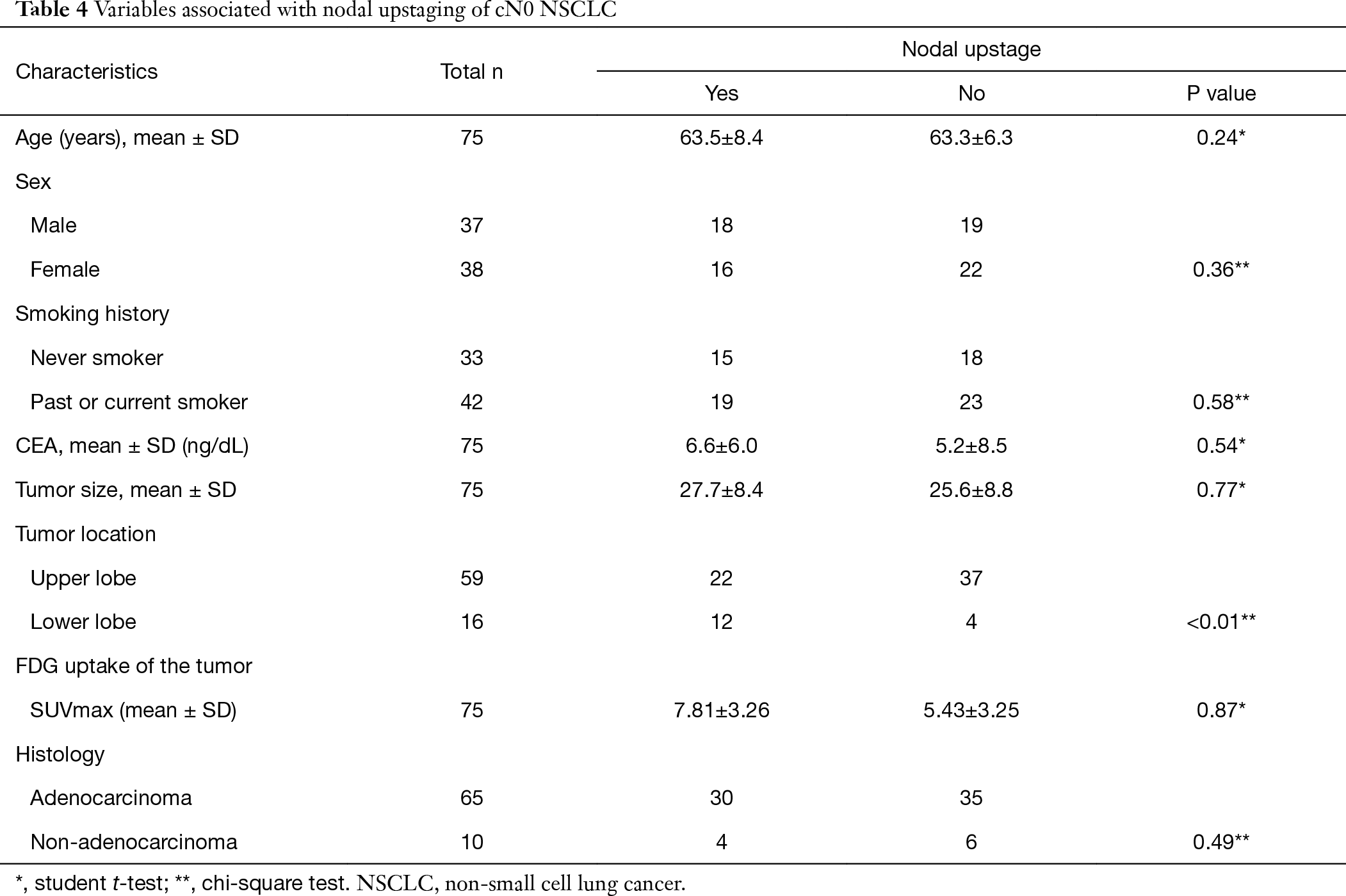 Median duration of follow up was 52 months, and 32 (42.7%) patients received adjuvant chemotherapy. Oral 5-fluorouracil was administered to 9 pathological stage I patients and to 1 p-stage II patient. The other 22 patients (1, 4, and 17 patients with p-stage I/II/III cancer) received platinum-doublet chemotherapy. Recurrence or metastasis during follow-up was noted in 29 patients (8 pN0 patients, 2 pN1 patients, 18 pN2 patients, and 1 pN3 patient). Only 2 patients developed locoregional lymph node recurrence around the carina. 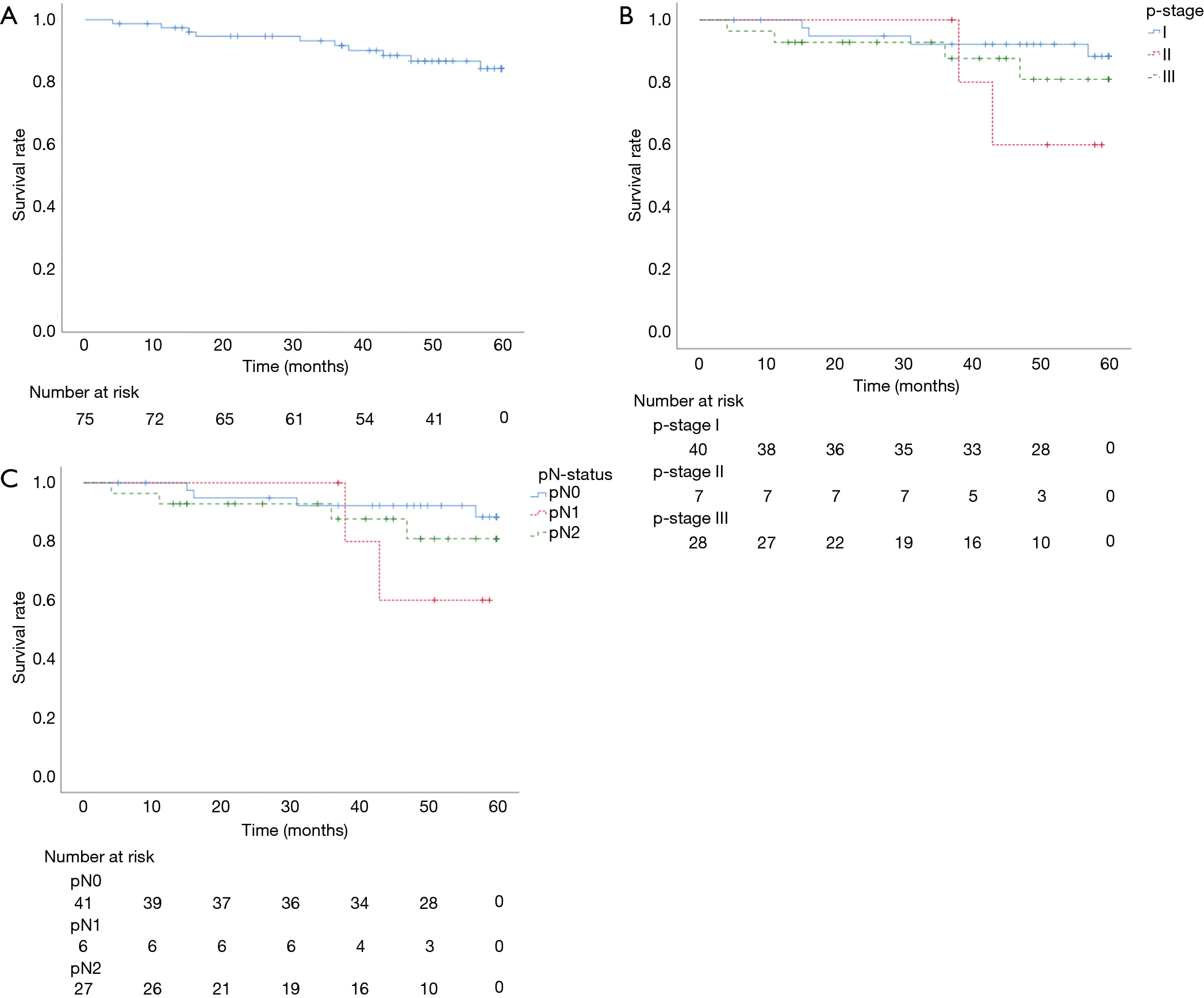 VATS is a common surgical strategy for small node-negative lung cancers. Some previous studies reported that outcomes for these cancers under VATS were not inferior to those for open thoracotomy, even when node involvement was unexpected. These include small clinical N0, pN2 lung cancers. Such cancers are associated with better outcomes than clinical and pathological N2 cancers, for which surgery is contraindicated (5). Some of the present patients might have been classified as clinical N2 cases if they had undergone invasive node biopsy via bronchoscopy or mediastinoscopy. Diagnostic accuracy of invasive biopsy for PET-positive lymph node is low even when the lymph nodes are over 1 cm (6), so necessity of preoperative invasive evaluation of PET-positive small (<1 cm) lymph node is controversial. Therefore, invasive biopsy was not performed for the present patients, even when PET-CT suggested node involvement.

The greatest obstacles in predicting surgical outcome after LND are that node involvement cannot always be definitively diagnosed without systemic LND and that stage migration substantially affects prognosis. Some previous studies found no difference in survival between lymph node sampling and systematic LND (7-9) in node-negative patients. In this study we noted that, in addition to being beneficial for precise diagnosis of nodal micrometastases in potentially node-positive NSCLC, systematic LND also yielded outcomes that were much better than those for node-positive patients in previous reports. Extended LND may improve outcomes for patients with early lung cancer and radiologically undetectable nodal micrometastases.

Surgical procedures, and thus stage migration, vary by center. Using VATS, Merritt et al. reported dissection of 9.9±0.8 nodes for early-stage NSCLC (10). Similarly, Denlinger et al. reported dissection of 8.9±5.2 nodes with VATS (11). As compared with techniques used in previous studies, the present ALT technique enables en bloc dissection of three times as many lymph nodes, which increased the nodal upstaging rate (Table 5) (10,12-14). Dissection of fewer than 11 lymph nodes is associated with a poor prognosis (15); thus, extended mediastinal LND might improve outcomes for left NSCLC with micrometastases. However, adapting LND via ALT is not practical for all patients with left NSCLC. Hattori et al. reported that presence of solid carcinoma, a CEA level >5 ng/dL, and a maximum SUV >5 predicted unexpected nodal involvement in clinical stage I NSCLC (16). Extended mediastinal LND under ALT might be suitable for these potentially node-positive patients.

Lymphadenectomy for the left thorax is often technically difficult because the thoracic aorta, left main pulmonary artery, and arterial ligament conceal the paratracheal and subcarinal spaces. This deep narrow space is difficult to see and limits sharing of information between surgeons under direct view via open thoracotomy. However, when using our ALT technique via VATS, this deep concealed space is readily visualized and shared by video monitor, which enables easier en bloc dissection of the carinal zone (paratracheal and subcarinal lymph nodes), as shown in Figure 1. Nodal upstaging after extended LND was more frequent in patients with cancer of the left lower lobe, because node involvement around the carina through station 7 was susceptible to metastasis (17).

This study had some limitations, the most important of which is that it was a one-arm retrospective study at a single institution and was therefore unable to assess the true effectiveness of extended LND via ALT. A second limitation is that the stage migration effect could have affected rates of nodal upstaging and survival, because ALT was performed for selected patients with suspected advanced cancer. Despite these limitations, the excellent survival rate among node-positive patients suggests that extended LND with ALT is beneficial when radiologically negative but potentially node-positive cancer is diagnosed during surgery. Prospective clinical studies are necessary in order to clarify the survival effect of extended LND via ALT by analysis of LND, with or without ALT.

Ethical Statement: This study was approved by the institutional review board of Jichi Medical University (No. 17-056). Informed consent was obtained in the form of opt-out on a website for the study.