One of the most common malignancies, lung cancer, is the leading cause of cancer-related mortality and morbidity in the world, with almost 85% of cases being non-small cell lung cancer (NSCLC) (1,2). Patients with clinical stage IA NSCLC constituted as high as 36% of total lung cancer patients according to the International Association for the Study of Lung Cancer (IASLC) (3). Although stage I NSCLC has significantly a better survival outcome than that of advanced stage NSCLC there are still 30% of patients suffering from postoperative recurrence (including local recurrence and distant metastasis) when receiving a complete resection (4,5). Although a distant metastasis is a major determinant of secondary survival, an intrathoracic locoregional recurrence is a common postoperative failure pattern. One of the explanations for this is the potential difference between MLD dissection and N2 station assessment among patients with pathological stage I IADC.

Unfortunately, guidelines and recommendations for clinicians to identify optimal MLN dissection are still lacking. Some studies have shown that MLN dissection significantly aided in the prognosis and staging (6-9), while other surgeons have asserted it is only useful for cancer staging but not prognosis (10). Still other researchers have even declared that MLN dissection could potentially increase longer operative time and postoperative surgery-related morbidity (11-14). Each of these conflicting viewpoints has made surgeons routine practice varies from mere visual inspection of the unopened mediastinum to radical lymphadenectomy (15).

The lymphatic drainages from primary tumors to the hilar and MLNs have been investigated for over 60 years (16). MLN dissection has been of great significance for prognosis of potential postoperative mediastinal recurrence among those early-staged IADC. Hence, we aimed to evaluate the association between the number of MLNs and N2 stations harvested and the MS-RFS rate based on a study of 2,199 patients with pathologic stage I IADC from the Shanghai Chest Hospital.

The institutional review board of the Shanghai Chest Hospital supported this study and provided informed consent for our operation. Patients with stage I IADC who underwent curative resection between 2009 and 2013 were all identiﬁed for potential inclusion. Patients with a history of malignancy within 5 years (including metastatic tumors in lung), small cell lung cancer and distant metastases were ineligible for the analysis. We also excluded patients who received induction treatments, and/or whose follow-up information could not be collected. Additionally, patients receiving adjuvant therapy were excluded from the series. Atypical adenomatous hyperplasia (AAH), adenocarcinoma in situ (AIS) and minimally invasive adenocarcinoma (MIA) are non-invasive lesions and free from LN metastasis. Thus, patients with these lesions were also excluded. A summary of the patient selection process is shown in Figure 1. All the patients received preoperative assessments including chest CT scanning, abdominal CT scan or ultrasound, brain CT scanning or MRI and radionuclide bone scanning, to exclude distant metastases. Positron emission tomography (PET)-CT was an optimal substitution if necessary. 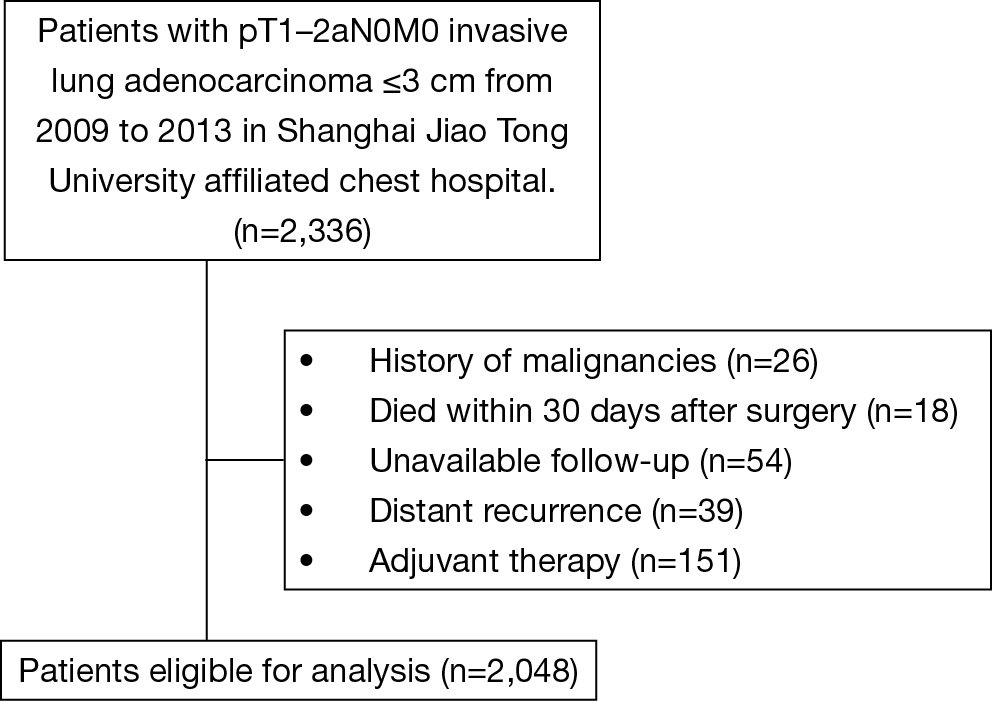 The resected lung specimens and LNs were fixed in 10% formalin and then embedded in paraffin. Subsequently, the hematoxylin and eosin (HE)-stained sections were evaluated microscopically by two experienced pulmonary pathologists (Jie Zhang, Yuchen Han).

The pathological subtypes of resected stage I ADC were classified into 5 major histological patterns including lepidic, acinar, papillary, solid, and micropapillary predominant subtypes, along with their related variants. Classification was completed according to the recommendations published in 2011 (17) by the joint effort of the International Association for the Study of Lung Cancer (IASLC), the American Thoracic Society (ATS), and the European Respiratory Society (ERS), which recorded in 5% increment for adenocarcinomas. In this novel proposal, different kinds of subtypes were related with different prognoses, with lepidic (L) labeled as favorable, acinar and papillary (A+P) labeled as intermediate, and micropapillary and solid (M+S) labeled as poor.

The number of MLNs was obtained by reviewing operative notes and pathology reports. Lymph nodes were named according to the American Thoracic Society’s (ATS) lymph node stations (18). LN stations from the 1st to the 9th were assigned under the N2 station label. The terms used by the surgeons in the operative reports to qualify the technique of lymph node evaluation were not taken into consideration. If more than one sample was obtained from a single station during surgery, it was counted as a single lymph node. Mediastinal recurrence was defined according to the CT and PET-CT findings. In a CT scan, a mediastinal lymph node (MLN) with a short axis diameter measuring 10 mm or more was determined to indicate clinical N2 recurrence. On PET-CT scan, a SUVmax value greater than 2.5 was diagnosed as a PET-positive lymph node.

After the exclusions, a total of 2,048 patients met the standards. All patients were first followed up through out-patient clinic or telephone every 3 months for the first year after surgery, every 6 months for the next 3 years, and then annually after that.

All the clinicopathologic data and distributions of survival were analyzed by SPSS 23.0 software package (SPSS Inc., Chicago, IL, USA) and Prism 5 (GraphPad Software Inc., La Jolla, CA, USA). The curves of RFS, as well as the comparisons, were calculated by Kaplan-Meier survival curves and the log-rank test. Two-sided P<0.05 was set as statistical significance in this study. 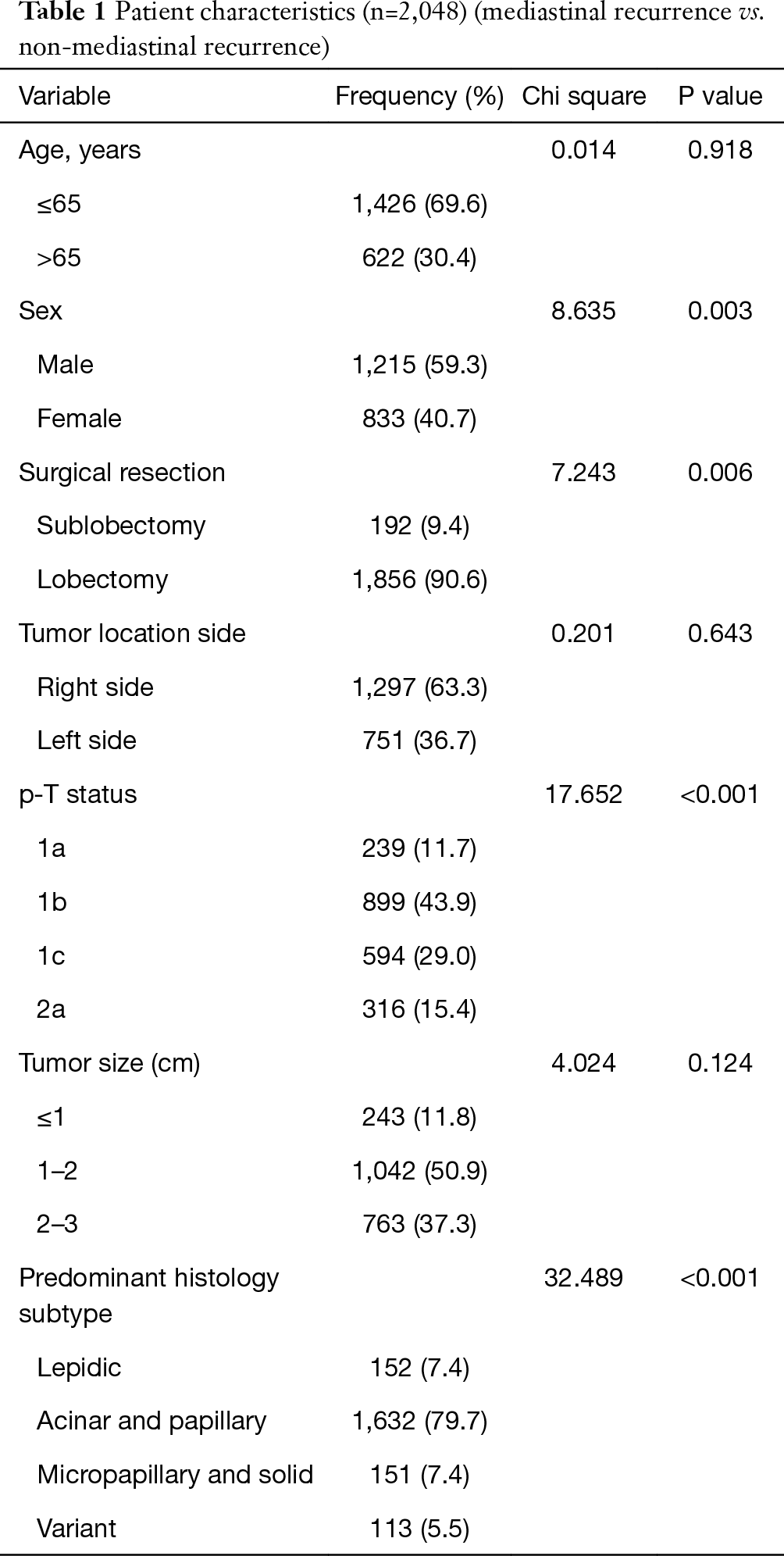 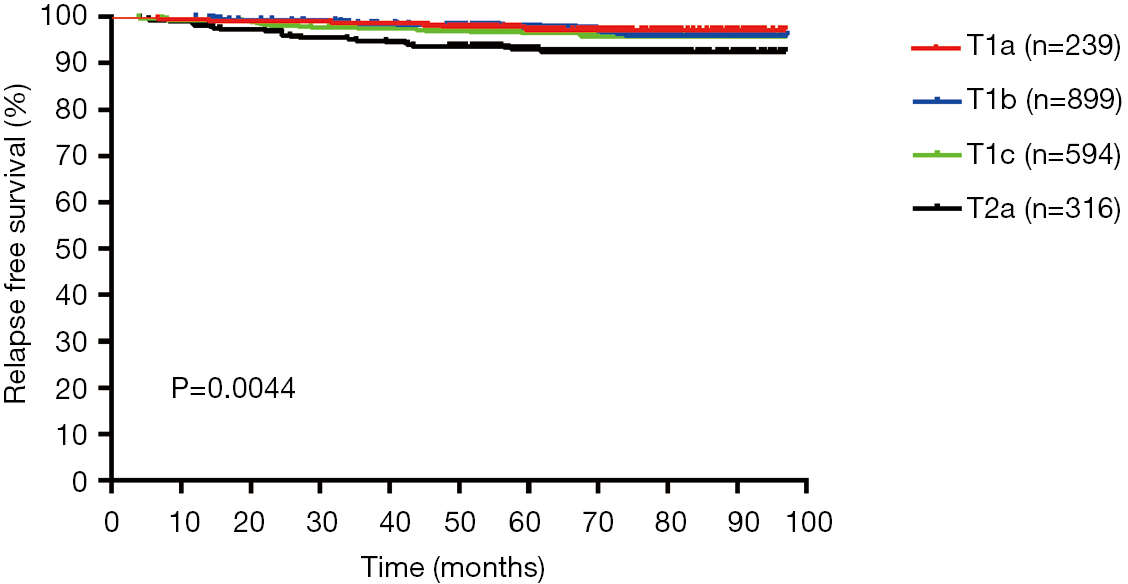 The distribution of MLNs and N2 stations all conformed to normal distribution (Figure 2A,B), the mean number of total MLNs and N2 stations was 4.40±3.09 (0–22 nodes) and 2.84±1.497 (0–6 stations), respectively. We averaged 1.55 of the number of lymph nodes obtained from each station. We took the number of 5 lymph nodes and 3 N2 stations as the cutoff value in this research. The details in the lymph node assessment are listed in Table 2. The Kaplan-Meier survival curves for MS-RFS are depicted in Figures 3,4. 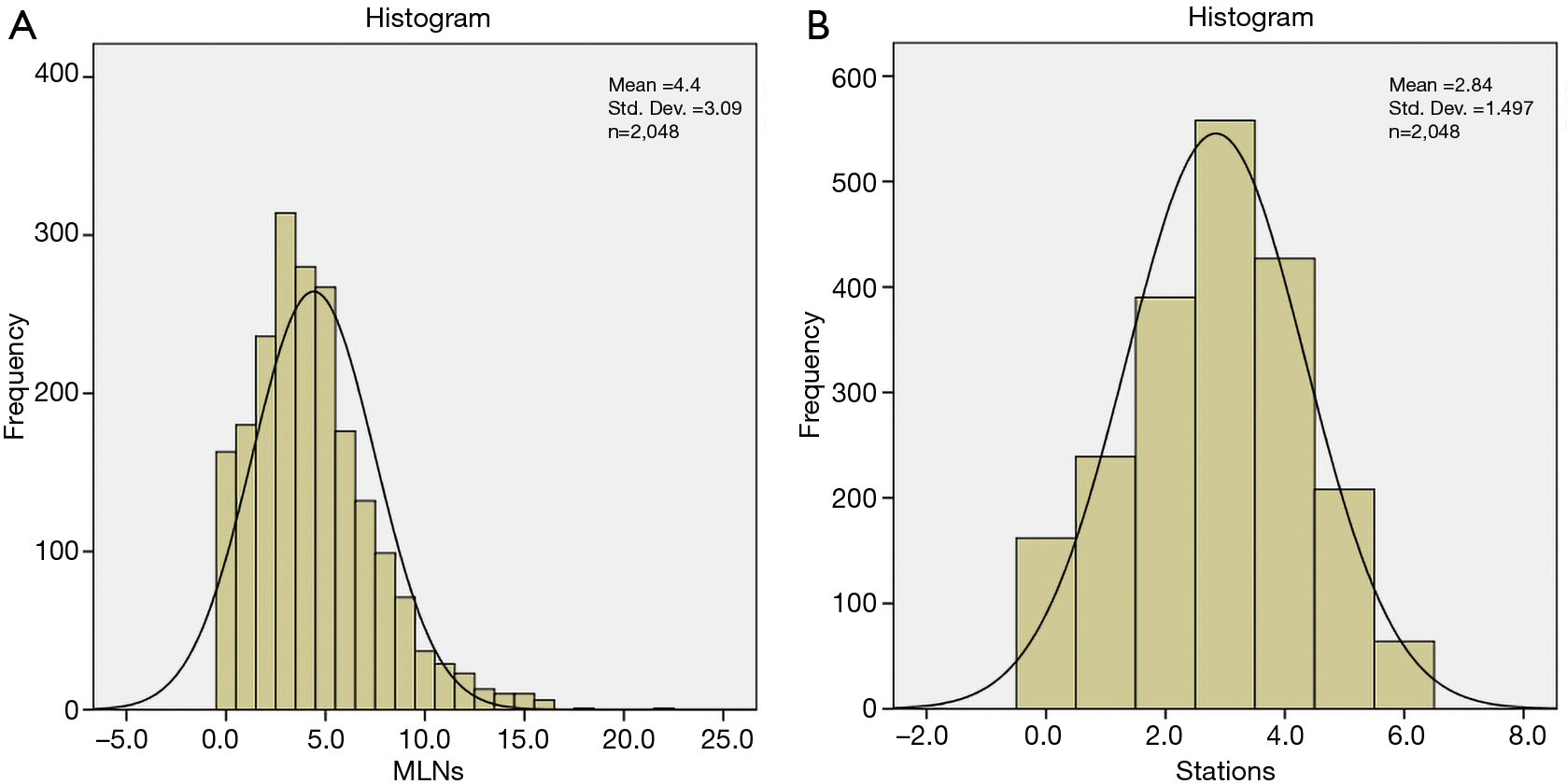 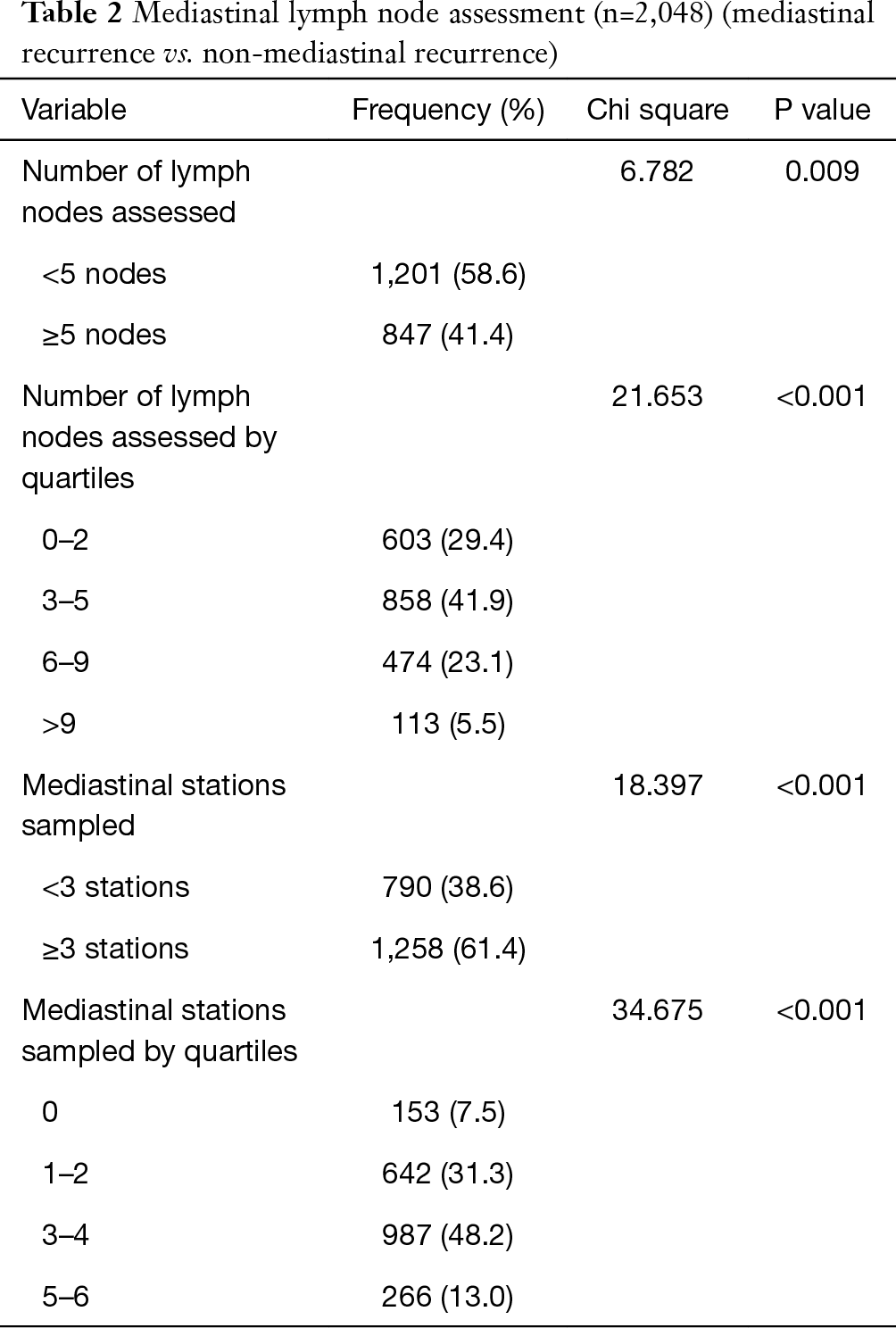 Opinions still vary among surgeons as to whether to remove all, some, or none of the MLNs during surgical resection; therefore, we sought to determine the number of harvested MLNs and assessed N2 stations that should be considered for the accurate prediction of prognosis in pathologic stage I IADC.

This retrospective analysis of our data revealed that the number of assessed N2 stations was a significant predictor of MS-RFS in multivariable analysis for patients with stage I IADC; an improved MS-RFS rate was obtained the more N2 stations were resected. Gajra et al. (15) also observed that, in patients with stage I NSCLC, a greater number of N2 stations studied had an improved RFS compared with patients with fewer N2 stations examined (P<0.001). Given the subjectivity and variability in MLNs resection, the clinical significance of the MS-RFS differences between MLNs groups is still questionable. It is worth remembering that the quality of the complete mediastinal lymphadenectomy depends on its anatomical boundaries rather than on the number of resected MLNs (19,20). Our study demonstrated that the number of MLNs and stations assessed were not significant predictors of the overall survival (OS) in multivariable analysis (data not shown) (HR =0.623; 95% CI, 0.312–1.327, P=0.173 and HR =1.456; 95% CI, 0.703–2.958, P=0.324, respectively), which means that the extent of MLN dissection is not related to the patient’s long-term survival rate. Several studies have presented similar results. For instance, Darling et al. (21) reported in a prospective randomized controlled clinical trial (ACOSOG Z0030) that there was no difference in long-term survival between systemic MLN dissection and MLN sampling during the resection for patients with T1 or T2, N0 or non-hilar N1 NSCLC. The median survival for MLNS is 8.1 years, and it is 8.5 years for MLN dissection (P=0.250). However, all subjects in his study included patients with tumor from stage IA to IIIB, and the pathological types of their research included squamous cell, adenocarcinoma, large cell, bronchoalveolar, and other NSCLC. Moreover, their extent of resection varied from R0 to R2 while our surgery was all R0 resection. These incongruities may partly explain the difference in results. Sugi et al. (22) also found that systematic MLN dissection showed no superiority against MLN sampling statistically in the 5-year survival rate among T1N0M0 NSCLC. The results reveal that the extent of MLN dissection is not related to OS, although we still strongly recommend clinicians to perform a standard systematic mediastinal lymphadenectomy for a lower mediastinal recurrence and a better tumor staging.

With regards to the predominant histological subtypes, M+S plotted a worse recurrence rate on the MS-RFS curves when compared with subgroups of L and A+P. Cha and associates (23) reviewed 511 patients with lung adenocarcinoma ≤3 cm, and found that the patients with lepidic predominant tumors had a good prognosis but those with solid and micropapillary predominant tumors presented an opposite trend. Their results are essentially in line with what we discovered and in compliance with the pathological classification published by the IASLC/ATS/ERS in 2011 (24).

The present meta-analysis revealed that the stage I lung cancer patients undergoing sublobectomy after intentional selection achieved comparable survival to those who received lobectomy (25). As for each of the 2,048 IADC patients who underwent lobectomy, they had a better MS-RFS rate than those who underwent sublobectomy (P<0.001). These results also agree with the NCCN guidelines for MIA surgery requirements that strongly recommend lobectomy combined with systematic lymph node dissection or sampling for stage I IADCs.

There were several limitations in this study. First, our study didn’t elaborate which certain kind of N2 stations were included in our assessed N2 station. In other word, it was the number not the certain station that made sense, so this hypothesis and results still needed further investigation. Second, those clinical and pathological data were retrospective in nature, and they should be conﬁrmed in prospective trials if possible.

In summary, our finding demonstrated that T status, surgical resection, predominant histology subtype and assessed N2 stations were independently significant indicators of MS-RFS. In order to improve MS-RFS among patients with pathological stage I IADC, we recommend the cutoff values for harvested MLNs and assessed N2 stations be 5 and 3, respectively,.

Ethical Statement: The study was approved by the Institutional Review Board [No. KS (P1733)] and written informed consent was obtained from all patients.