Pulmonary neuroendocrine carcinoma (NET) represents about 20% of all lung cancers. Pulmonary NET is composes of typical carcinoids (TCs) and atypical carcinoids (ACs), that are regarded as low to intermediate malignant tumors, and large cell neuroendocrine carcinoma (LCNEC) and small cell lung carcinoma (SCLC), that constitute the high-grade carcinoma (1). A low frequency of pulmonary NET poses challenges in understanding the features of molecular aberrations, treatment and prognosis, especially in resected cases, as the operation indication for LCNEC and SCLC is rare. Reportedly, the advanced nodal status and simultaneous expression of CD56 and chromogranin-A were significantly associated with poorer outcome (2). Thus, the additional investigation of the function of these neuroendocrine markers on the causes of their specific differentiation, behavior and treatment options is essential.

Programmed cell death protein-1 (PD-1) is expressed on the surface of T cells and regulates on the surface of T cells and regulates excessive autoimmune responses. Programmed cell death-ligand 1 (PD-L1), an immune-modulating ligand of PD-1, is expressed on antigen-presenting cells as well as tumor cells. Recently, immune checkpoint inhibitors (ICIs) were administered to patients with non-small cell lung cancer (NSCLC), and marked effects of ICI were obtained even for chemotherapy-resistant patients (3,4). ICIs block the immune checkpoint molecules expressed on the cancer cells, thereby blocking the inhibitory signals from the ligand and thus, prolonging the activation of T cells. Thus, T cells are induced to attack the cancer cells (5). The PD-L1 expression of tumor cells is one of the important factors in the immune response against tumor cells.

The relationship between postoperative survival and molecular expression patterns of pulmonary NET was analyzed in the present study to establish a more effective treatment strategy. Herein, we also reviewed our experience with 105 surgical cases with pulmonary NET and investigated their histological characteristics and clinical behavior.

In this study we reviewed our experience with the curative surgical resection of PNC, retrospectively. A total of 105 patients, who underwent complete resection between 1978 and 2016 at the University of Occupational and Environmental Health, Japan and had a final histological diagnosis of pulmonary NET, were analyzed. The clinical data of 105 pulmonary NET patients were analyzed; however only 82 surgical specimens were available as the old specimens were discarded.

Tumors were classified according to the current World Health Organization (WHO)/International Association for the Study of Lung Cancer (IASLC) criteria for neuroendocrine tumors (NET) (6). LCNEC and SCLC are classified as a high-grade tumor, whereas well-differentiated types are classified as either a low-grade (TC) or intermediate-grade (AC) tumors. TCs are defined as tumors >5 mm in diameter, with carcinoid morphology and <2 mitoses/2 mm2, and lacking necrosis. Tumors with a mitosis rate of ≥2 but <10/2 mm2, with or without necrosis, were classified as ATs. The final pathological stage was classified according to the standard rules for the clinical and pathological record of lung cancer (8th edition) (6). A complete resection, classified as R0, was defined as the pathological demonstration of the negative tissue margins and assessment by the surgeon that all detectable diseases had been removed.

The present study was approved by the Ethics Committee of University of Occupational and Environmental Health, Japan (approval number 29-218).

The records of the patients were reviewed with respect to surgical procedures and postoperative prognosis. The patients were followed-up at 1-month or at 3-month intervals for ≥5 years. Physical examinations, routine hematological analyses, chest radiography and computed tomography (CT) scans of the chest, upper abdomen, and the brain were performed for the evaluations of the recurrence.

The survival rates were calculated by the Kaplan–Meier method and the significance of the differences between prognosis and clinicopathological factors was evaluated by Cox proportional hazard model using STATA version 14.1 (Stata, College Station, TX) by a specialized statistician. All tests were two-sided, and statistical significance was defined as P<0.05.

The patients’ characteristics are presented in Table 1. The cohort comprised of 77 males (73.3%) and 28 females (26.7%) with a median age at presentation of 70 years (range, 32–85 years). The pathological types included 67 (63.8%) SCLC, 18 (17.2%) LCNEC, 14 (13.3%) TCs and 6 (5.7%) ACs among the patients. Two patients showed pathological a y-stage 0 disease, 49 had stage I, 26 had stage II, and 28 had stage III. The overall 5-year survival of patients with pulmonary NET was 45.7% (Figure 1). The analysis of the pathological types demonstrated a significantly worse prognosis of ACs than that of TCs (P=0.0009) (Figure 2). A total of 82 available specimens of pulmonary NET patients were analyzed using IHC. The neuroendocrine markers were not significantly correlated with their prognosis of these patients. PD-L1 expression ratio of tumor cells in SCLC/LCNEC/TC/AC was 26.1%/50%/15.4%/20%, respectively (Figure 3). However, the PD-L1 expression was also not significantly correlated with each prognosis. Furthermore, we could not any distinct prognostic factors with respect to the clinicopathological features of pulmonary NET, as it is a heterogeneous population such as SCLC/LCNEC/TC/AC. 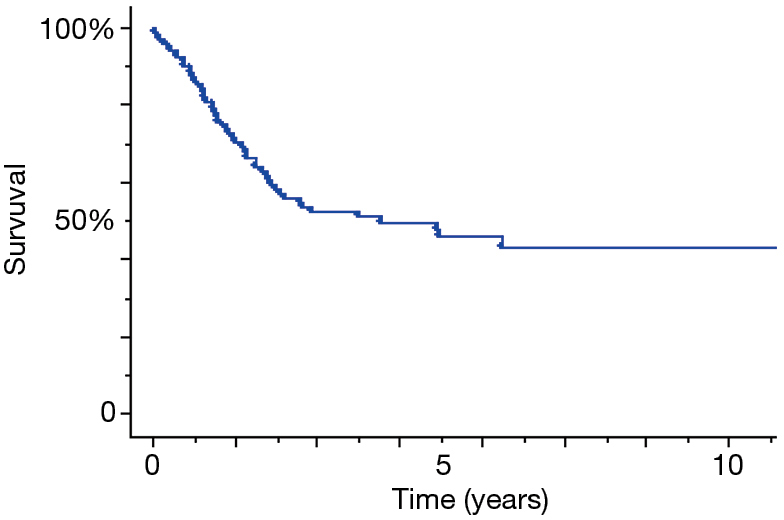 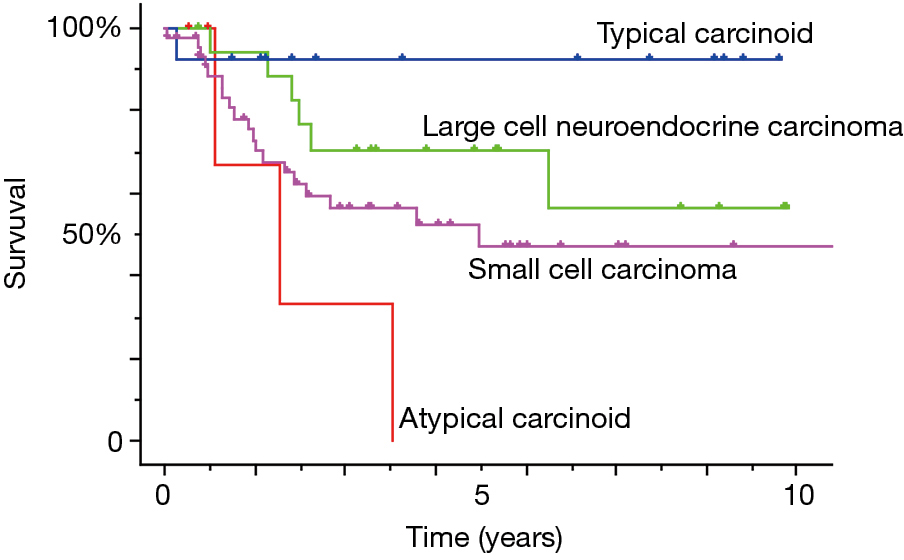 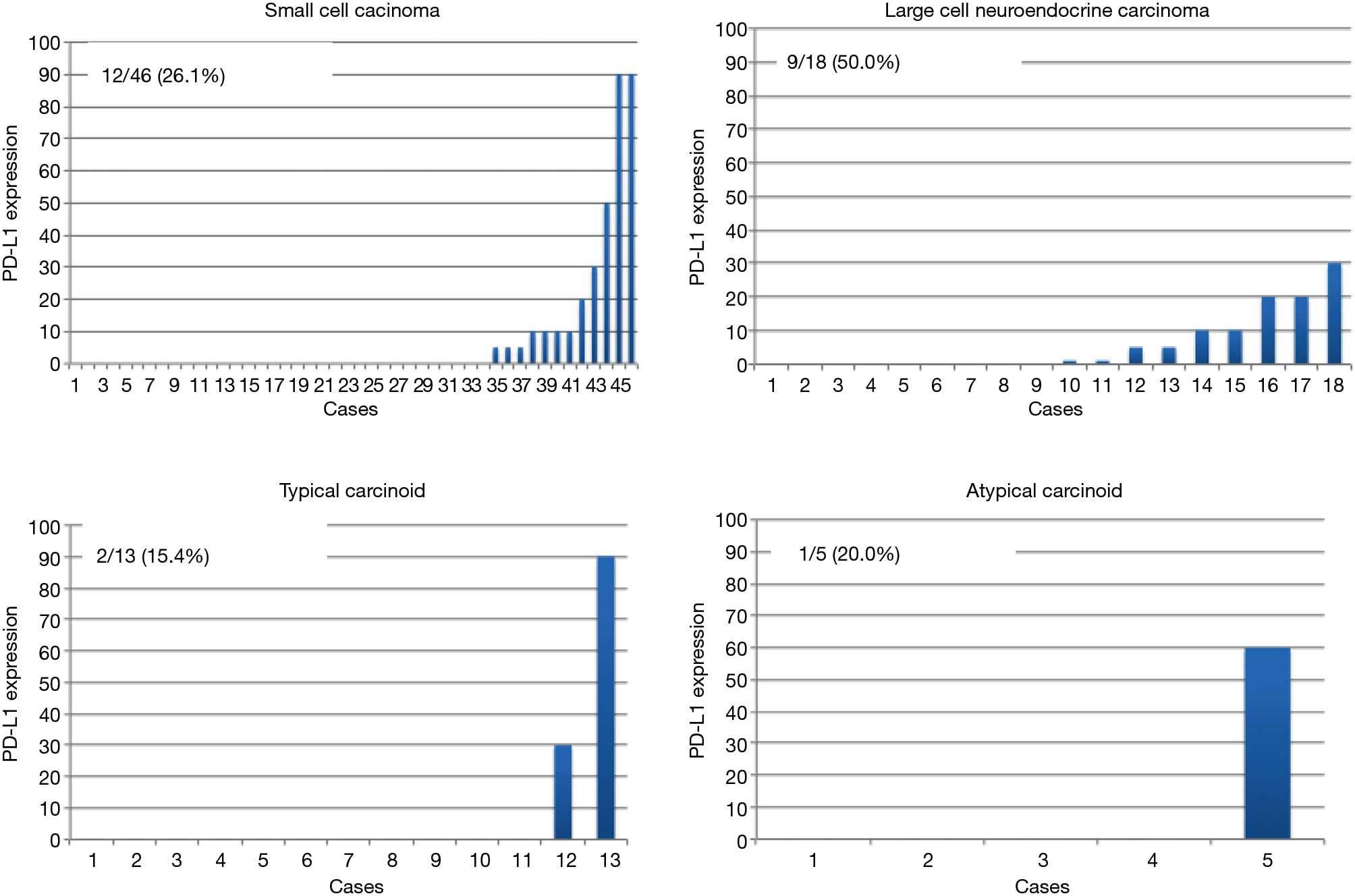 Figure 3 The expression of programmed cell death-ligand 1 (PD-L1) in each pathological type is shown.

Therefore, we analyzed patients with SCLC which relatively comprised of a homogeneous population. The SCLC patients’ characteristics were presented in Table 2. The group comprised of 55 males (82.1%) and 12 females (17.9%) with a median age of 70 years (range, 39–85 years). Two patients presented pathological y-stage 0 disease, 14 had stage I, 16 had stage II, and 25 had stage III. The overall 5-year survival of patients with SCLC of the lung was 47.3% (Figure 4). The univariate analysis of the clinical factors was shown in Table 3, and no significant factor was detected. Preoperative and postoperative chemotherapy with or without radiotherapy was not a significant prognostic factor in this study. Forty-six surgical specimens of SCLC patients were available, and the expression profiles of each neurological marker in SCLC were shown in Figure 5. Tumor cells stained by CGN, CD56, SYN and NSE antibodies were observed in 25.3%, 100%, 100% and 94% of SCLC, respectively. In the univariate analysis of the molecular expression, neuroendocrine markers such as CGA and SYN, exhibited a poor prognosis, albeit without any significant differences (Table 4). Therefore, the prognostic factors might be identified when the number of analyzed cases is increased. 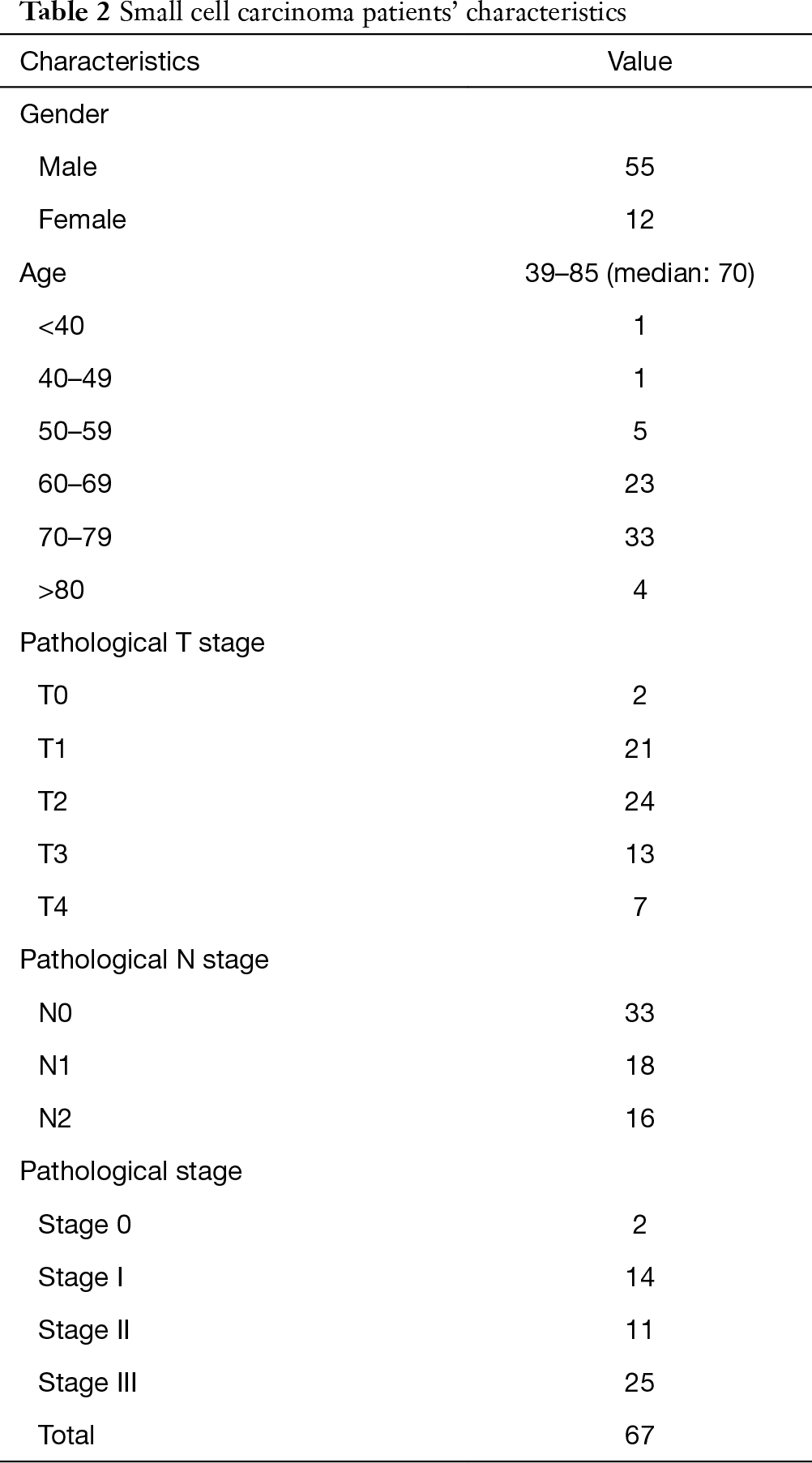 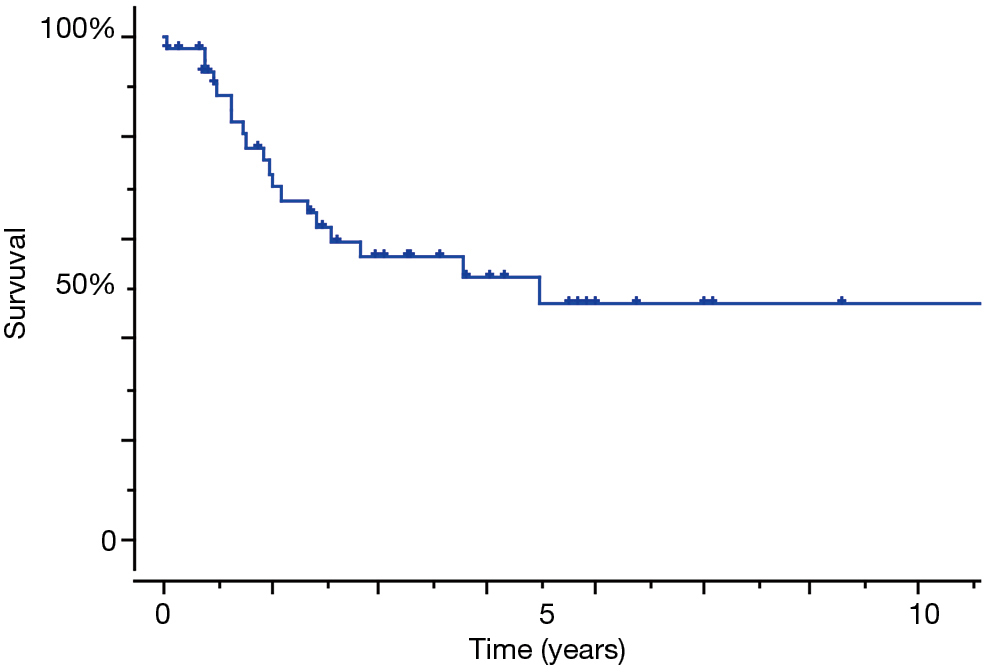 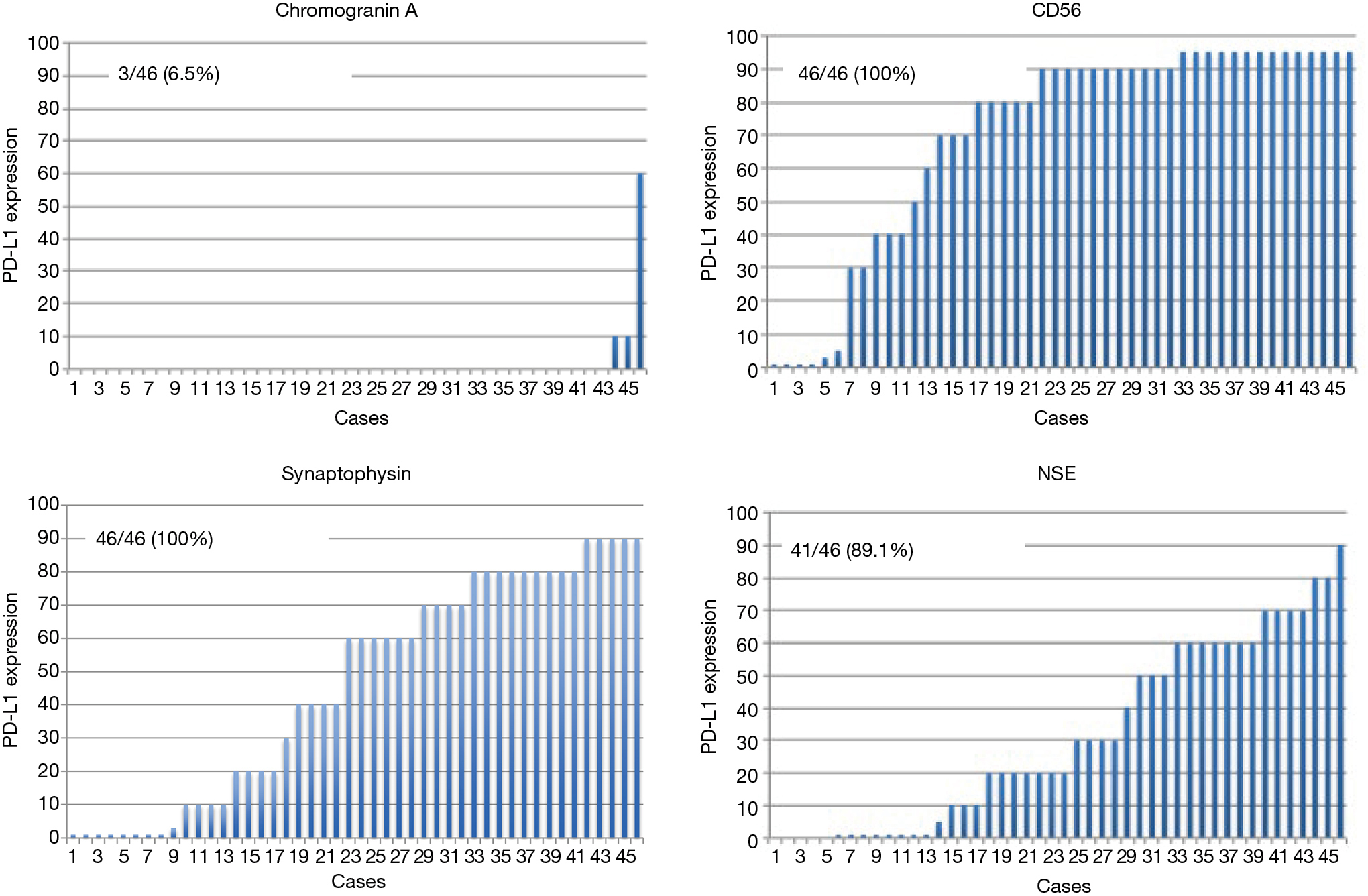 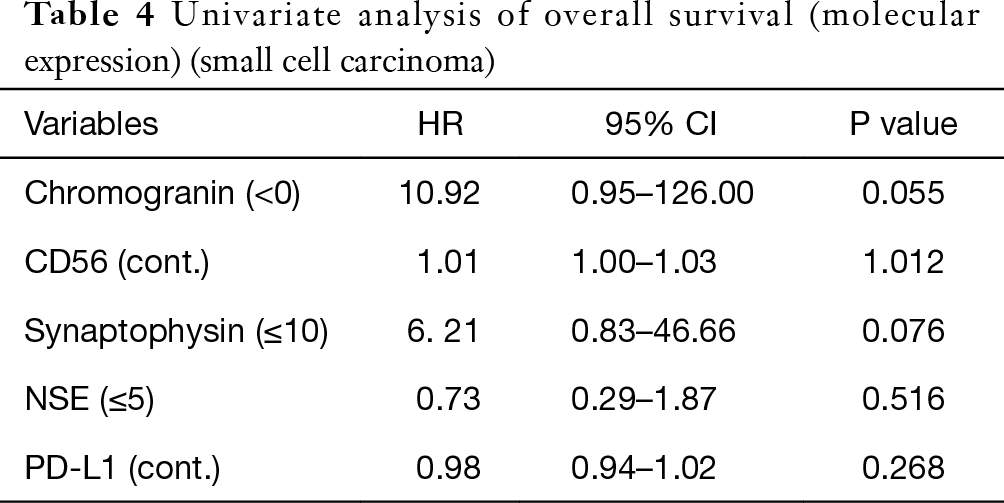 Pulmonary NET constitutes a heterogeneous group of different entities that have been classified attempted over several years. Low-grade TCs and ACs are generally associated with a satisfactory prognosis and low metastatic potential. Patients with TC have satisfactory prognoses, with >87% of the patients survived for 10 years. Conversely approximately 25% to 69% of patients with AC survived for 5 years, and many developed a widespread disease (7-9). However, the current results of AC cases showed that the 5-year survival rate was 0%. The AC cases in our institute exhibited a poorer prognosis as compared to that in the literatures; however, the sample size of AC cases was only 6. Although significant differences were detected in AC and TC in the present analysis, further case accumulation might be essential.

SCLC exhibits a highly aggressive spread with a markedly poor survival (10). In this study, the 5-year survival of SCLC patients after complete resection was 47.3%, which indicated a satisfactory prognosis. The surgical indication of SCLC patients was considered carefully based on its aggressive characteristics, as the preoperative and postoperative chemotherapy with or without radiotherapy did not constitute the prognostic factors in the present study (Table 3). A limited number of cases with SCLC might have a surgical benefit, although it should be considered cautiously.

In addition, LCNEC is also a rare population compared to the other NSCLC, large-cell carcinoma, even with partial neuroendocrine features displayed the poorest clinical outcome in a study by Sterlacci et al. The overall incidence of resectable LCNEC is estimated to be <3%, and long-term survival (3- and 5-year) between 21% and 57% (11-14); however, the current data showed that the 5-year survival was 70.6%. Thus, a careful decision for the surgical indication of LCNEC patients might be performed similarly to that for the SCLC patients. Reportedly the expression of CD56, CGA or both was a significant prognostic factor. Additionally, these patients were also found to have a higher incidence of nodal metastasis, putatively explaining the observed difference in the outcome (2). A negative influence of CGA elevation on the prognosis has also been reported for SCLC, and poor survival for CD56 positive has been observed in patients with acute promyelocytic leukemia (15,16). Interestingly, similar studies focusing only on LCNEC did not establish a significant correlation between the pattern of staining for neuroendocrine markers and survival (11,12). The current data showed that the expression of CGA or/and SYN had a tendency of poor prognosis, although not statistically significant and hence additional data accumulation it is essential for significance. Although CGA is detected in normal tissues as well as in various kinds of cancers, pulmonary NET shows particularly a strong expression of this protein (17,18). In most patients with carcinoids (56–100%) increased levels of CGA are observed; however, the expression profile depends on the mass of the tumor and might be considered as a prognostic factor (19,20).

Nevertheless, the blockade of immune checkpoints with monoclonal antibodies has also recently emerged as a new therapeutic strategy in several malignancies; however, the clinicopathologic characteristics associated with PD-L1 expression in PNC have remained largely unknown. Also, the expression of PD-L1 in SCLC/NSCLC has been reported as 0–71.6%/15.2–57.5% (13,21-26). In this study, the PD-L1 expression in 82 available surgical specimens of SCLC/LCNEC/TA/AC was 26.1%/50.0%/15.4%/20.0%, respectively. Nonetheless, the PD-L1 expression was not significantly correlated with each prognosis. Ishii et al. reported that the expression of PD-L1 in SCLC patients was positively correlated with a limited disease (LD) stage, and PD-L1-positive SCLC had a significantly longer overall survival than PD-L1-negative cases (19). On the other hand, Schultheis et al. reported that 18.5% of tumor-infiltrating macrophages and 48% of lymphocytes showed the PD-L1 protein expression but tumor cells did not exhibit the same (22). The current data showed that the PD-L1 expression of SCLC was not a prognostic factor; however our data were collected from the surgical specimens that were completely resected and might differ between previous reports and the present study. In a previous study, we reported the PD-L1 expression of NSCLC using E1L3N clone as an anti-PD-L1 clone (27). E1L1N can be used to specifically stain the PD-L1 protein on tumor cells in order to distinguish them from other PD-L1-expressing cells such as lymphocytes, dendritic cells, and native tissue stromal cells.

Nevertheless, this study has a few limitations. First, our specimens included old ones which were resected in 1970s. However, the old specimens also could be stained by IHC. Although alteration of old specimens could not be denied, we regarded the negative effect of old specimens as little. Second, the data were collected retrospectively. Third, clinical data obtained from 105 patients were not efficient for deducing the specific features of pulmonary NET. Moreover, 23 surgical specimens were not available because of disposal. Thus, a large prospective study is essential for the next generation therapy of pulmonary NET.

In conclusion, PD-L1 expression of pulmonary NET was not significantly correlated with prognosis. SCLC is a relatively rare population of surgery for lung carcinoma. Neuroendocrine marker profiles such as CGA and SYN might assist the prediction of prognosis and probably influence the decision for adjuvant chemotherapy or follow-up intervals after surgery; however, additional case accumulation is imperative.

Ethical Statement: The present study was approved by the Ethics Committee of University of Occupational and Environmental Health, Japan (approval number 29-218).