From the first epidemiological reports to this day, heart failure (HF) remains one of the leading causes of death in the developed world (1). In stage D of HF, after exhaustion of medical therapy, either cardiac transplantation or mechanical circulatory support (MCS) is recommended (2). Owing to a shortage of donor hearts, there has been a continuous increase of MCS implantations in the last decade. From all long-term MCS, devices over 95% are the left ventricular assist devices (LVAD) (3). Besides LVAD implantation, patients often need concomitant surgical procedures for additional cardiac structural abnormalities, such as coronary bypass surgery, heart valve surgery or other procedures.

In this particular paper, we will focus on the adjuvant therapy of tricuspid regurgitation (TR) in patients receiving left-sided circulatory support. In such population of patients, TR is typical and almost secondary due to advanced left-sided HF, which causes a higher afterload in the right ventricle with pressure and volume overload and, as a result, tricuspid annulus dilatation (4). Severe TR has been identified as a reliable predictor of right heart failure (RHF) and higher mortality after LVAD implantation (5-7). Importantly, the spontaneous reduction of TR after LVAD implantation was controversially described in previous reports (8-10). Nevertheless, there are still no specific recommendations or guidelines on the treatment of tricuspid valve regurgitation in patients undergoing LVAD implantation. Previous reports showed contradictory results regarding the benefits of concomitant TVR (9,11-18). This topic remains under investigated and current evidence is unable to offer a definitive answer, whether the moderate-to-severe TR has to be surgically treated in conjunction with LVAD implantation (18). The operative strategy almost depends on own surgical philosophy in each LVAD implantation center.

At our institution, from June 2007 to February 2018 a total of 124 patients received a long-term LVAD because of heart failure by cardiomyopathy, post-cardiotomy shock or acute myocardial infarction as DT, RT, BTT and BTC strategy. The indication for the operation was made following the current guidelines (19). We used one of three LVAD models: HeartMate II (HM II), HeartMate III (HM III) (Thoratec Corp., Pleasanton, CA, USA) and HeartWare (HVAD) (HeartWare International Inc., Framingham, MA, USA). Choice of VAD was based on the availability of the device in the clinic and the personal decision of the surgeon. Thus, from 2007 to November 2015 we used the HM II and from November 2015 to 2018—either the HM III or the HVAD.

The study is a retrospective review of prospectively collected data. Data collected as part of the institutional Mechanical Circulatory Support Database included detailed information on patients’ demographics, baseline clinical characteristics and their laboratory, echocardiographic and hemodynamic parameters, as well as intraoperative variables and postoperative outcomes. The follow-up data collected by a periodic (once a month) presentation of the patients in our VAD clinic. The study was approved by the local Ethics Committee.

The primary endpoint was overall survival after device implantation at 30 days, one year and two years. Secondary endpoints were adverse events and other postoperative characteristics during the follow-up period. Patients were censored after their death or at the cutoff of the study.

The severity of TR was determined based on the preoperative echocardiography and defined according to the appropriate guidelines (20), ranged from grade 1 to 3: “1” for mild TR, “2” for moderate TR and “3” for severe TR.

The data were analyzed using IBM SPSS version 25 (IBM Corp., Chicago, Ill., USA). We used the Kolmogorov-Smirnov test to prove the data for normal distribution. Quantitative data are expressed as the mean and standard deviation (SD) for normally distributed variables and as the median and interquartile range for not normally distributed variables. Categorical data are expressed as frequency and percentage. We used the Mann-Whitney U-Test to compare mean values and Fisher exact test to examine the distribution of categorical variables between the groups. For the survival analysis, we used the R software v.3.4.3 (R Foundation for Statistical Computing, Vienna, Austria) (22,23). The significance of survival differences between the groups was assessed with the Log-Rank test. A value of P<0.05 was considered to be statistically significant.

In the entire cohort of 124 patients, the most frequent etiologies of HF were ischemic cardiomyopathy in 70 patients (56.5%), dilated cardiomyopathy in 34 patients (27.4%) and post-cardiotomy shock in 7 patients (5.6%). Figure 1 presents gender/age structure of the examined sample. We identified 88 patients with TR grade 0 to 1 (group 1) and 36 patients with TR grade 2 to 3 (group 2). In all cases, it was a secondary TR. Eighteen patients in group 2 did not receive surgical therapy of TR (group 2a or non-TVR), and 18 other patients received an additional TVR (group 2b or TVR). There were no statistically significant differences in preoperative parameters between Non-TVR and TVR groups. 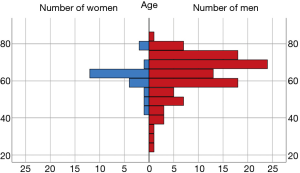 Groups 1 and 2 showed a significant difference in some preoperative characteristics. There were more patients with a smoking history, mechanical ventilation, extracorporeal life support and DT and RT as LVAD strategy in group 1, and more patients with atrial fibrillation and higher bilirubin value in group 2. The groups 2a and 2b did not show any significant difference in baseline preoperative characteristics, cardiorespiratory conditions, device strategy and laboratory parameters (Tables 1,2). Table 3 provides additional data for TR severity of patients in the group 2. 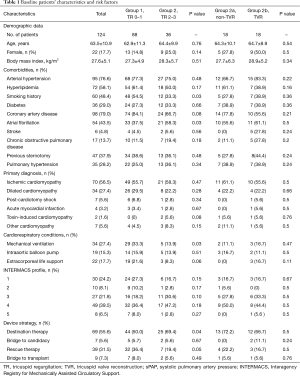 All 18 TVR procedures consisted of ring annuloplasties. Both group pairs (1 vs. 2 and 2a vs. 2b) showed significant differences regarding cardiopulmonary bypass time and overall duration of surgery. In group 2, significantly more patients received an additional closure of the left atrial appendage. Also, more patients in this group received cardioplegia during the operation as well as intraoperative implantation of a short-term right ventricular assist device (ST-RVAD). The patients of group 2a showed a higher need of open chest after surgery because of RHF (Table 4). 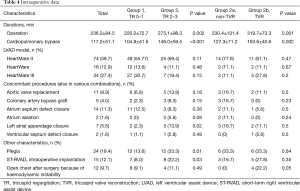 Table 5 outlines survival data. There was a significant difference in the survival rates for groups 1 and 2 at 30 days, one year and two years after surgery, even though there was no difference regarding the cause of death. Figures 2,3 depict the Kaplan–Meier estimate of overall survival comparing groups 1 with 2 and groups 2a with 2b, respectively. 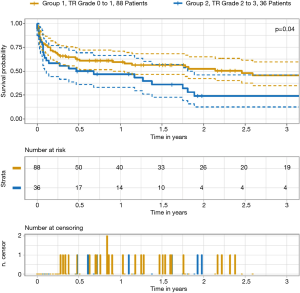 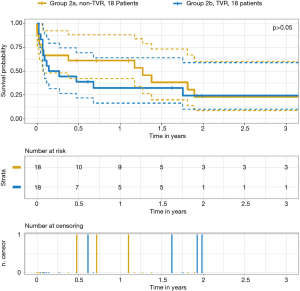 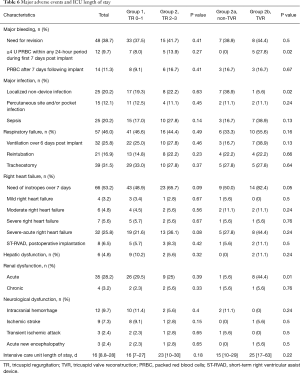 Fifty-five years after the first LVAD implantation in man (24), this procedure has emerged as a standard of care for end-stage HF patients. The number of LVAD implantations increases from year to year (25). Despite the considerable progress in the evolution of devices and techniques for their implantation, LVAD recipients still often suffer from a large number of severe complications. However, there are still no special guidelines for pre-, intra- and postoperative management of MCS, only several chapters with recommendations in the guidelines for management of HF. This study was conducted to expand a still insufficiently accumulated evidence to consequences of concomitant TVR and LVAD implantation.

Our preoperative patients’ demographics showed that in the group 1, there were worse cardiopulmonary conditions (higher incidence of ventilation and extracorporeal life support). On the other hand, in group 2 higher level of bilirubin was observed, which could be explained by venous congestion in TR patients (26). However, there was no difference in patients’ baseline data between TVR and non-TVR groups, which allowed a reliable comparison of outcomes.

Three different LVAD models were included in our study. Most patients received the axial-flow HM 2, as the placement of the centrifugal pumps, HVAD and HM III, started in 2015 in our institution. The evaluation period stretched over a period of 10 years. This limiting factor might be potentially a source of criticism. However, as previously published by our group (27), the device implanted in the examined cohort had no significant effect on the outcome. Moreover, postoperative echocardiograms were not evaluated in this study, which could be a methodological limitation. On the other hand, we structurally investigated the postoperative outcomes concerning RHF and end-organ function, which indicate the impact of TVR.

Our analysis has shown that the operation time and cardiopulmonary bypass time was significantly longer in patients who underwent the TVR. These observations are expected and have also been demonstrated in previous similarly-designed studies (11). Besides, in the TVR group, there was a higher need for blood products because of postoperative bleeding. Increased bleeding was possibly due to prolonged CPB time in combination with additional atriotomy for TVR during the surgery. Han et al. also reported a significant increase in postoperative bleeding requiring reoperation in their TVR group (17).

The frequency of intraoperative short-term right ventricular assist device (ST-RVAD) implantation due to acute RHF was significantly higher in patients with moderate-to-severe TR but similar in Non-TVR and TVR subgroups. It correlates with an opinion that the patients with significant TR are endangered for further worsening of RHF after LVAD placement (4,7). Further, we have demonstrated that in the TVR group there was a higher necessity to let the chest opened after surgery due to hemodynamic instability, which was caused through right heart insufficiency immediately after left-sided device implantation and weaning from cardiopulmonary bypass. Also, postoperatively the patients in the TVR group showed a longer need for inotropes, which is also a sign of poor right ventricular function in LVAD population. Controversial to our findings regarding increased RHF in TVR cohort, Piacentino et al. reported on a favorable effect of concurrent TVR regarding the improvement of RV function (9).

We have also seen a higher frequency of postoperative acute renal dysfunction in the TVR group despite the similar preoperative kidney function in the Non-TVR group. This can be explained by longer CPB duration and a higher incidence of RHF in patients with concurrent TVR. Saeed et al. also noted higher post-operative creatinine and blood urea nitrogen values in their TVR group (11).

In our study, despite the above mentioned significant differences in morbidity, TVR and Non-TVR groups demonstrated similar survival rates. However, the overall survival in patients with TR 2 to 3 was higher than in patients of group 1 with TR 0 to 1. Brewer et al. showed in their cohort of patients, that TVR at the time of LVAD implantation is associated with better survival (15). On the other hand, Ozpeker et al. reported, that the patients do not benefit from additional TVR, which was correlated with worse survival in their study population (16).

Krishan et al. presented non-inferiority of combined TVR and argued for a more liberal approach to TVR at the time of LVAD implantation (12). Veen et al. recently performed a systematic review and meta-analysis regarding LVAD implantation with and without concomitant TVR (18). They conducted a systematic literature search for articles published between January 2005 and March 2017 and included eight publications with a total of 865 patients in the meta-analysis (562 non-TVR vs. 303 TVR patients). Other than prolonged CPB time, there were no differences in outcome between LVAD-alone and LVAD+TVR groups. However, all included studies were retrospective non-matched non-randomised single-center analyses. Potapov et al. reported comparable results in patients with TR 3 supported either with LVAD + TVR or with biventricular support (28).

According to our observation, all similar previous studies, as well as ours, apart from the limitations mentioned above have the same methodological deficit, which could explain the controversial results: the severity of TR was only limited to “moderate-to-severe”. We believe that more precise definition of indication for TVR could bring more clarity to the issue. Thus, future studies should investigate the outcomes of LVAD + TVR in patients with moderate and severe TR separately. Because of the paucity of these challenging patients, maybe only multi-center trials on the board of large registries would be able to bring the evidence in this narrow topic on the next level.

This study is a retrospective non-randomized analysis of a relatively small number of CF-LVAD patients from a single medical center over a span of 10 years. Clinical decisions were made in a non-blinded fashion.

Survival was comparable in both TVR and Non-TVR groups (P>0.05), while patients undergoing LVAD implantation with concurrent TVR showed a significantly worse outcome regarding a higher incidence of RHF, bleeding tendency and renal dysfunction (P<0.05).