Chronic benzene poisoning (CBP), caused by frequent occupational exposure to benzene such as by breathing in, is one of the most common chronic occupational poisoning, according to the annual report of occupational diseases in China (1). The severity of CBP varies from white blood cell (WBC) decrease to lung cancer and leukemia. The risk of developing CBP can be affected by genetic variants, when engaging in benzene exposing work (2,3). Reactive oxygen species (ROS) production in response to benzene metabolite hydroquinone in bone marrow has caused oxidative DNA damage (4). In the past few decades, molecular genetics of the CBP has been focusing on the changes in genomic DNA. Pathogenic nuclear and mitochondrial variants associated to CBP have been identified by different laboratories (5-7). Multiple susceptibility loci in the pathogenesis among groups of CBP have been investigated, some linkage scans and candidate gene studied have been suggested have roles in CBP (8,9).

The major mechanism on the impairment of bone marrow by benzene and its metabolized products is through mitochondrial oxidative damage (10). Mitochondria have the key functions in maintaining living stage through energy metabolism, and self-death program execution through apoptosis (11). Energy metabolism generates ROS, the free radical causing oxidative damage in mitochondrial DNA (mtDNA), which affects the encoding of metabolic enzymes (12). It eventually leads to variants in mitochondrial genome, and mitochondrial dysfunctions that are related to diseases and clinically heterogeneous group of disorders, ranging from single-organ to severe multisystemic damage, such as lung cancer, leukemia, heart failure, Leber’s hereditary optic neuropathy, and Leigh’s syndrome (10,13-17). Human cytochrome c oxidase subunit I (COI), encoded by the mtDNA as the catalytic core of the cytochrome c oxidase, transfers electrons from reduced cytochrome c to molecular oxygen, and contributes to maintaining the electrochemical gradient across the inner mitochondrial membrane (18). COI plays an important role in the metabolism of benzene, as it operates as a ROS scavenger and is a part of cellular and mitochondrial defense mechanism against oxidative stress (19).

Circulating blood platelet contains fully functional mitochondria. The abundance of platelets in human blood circulation and the ease of collection by syringe have made this an attractive source of mitochondria for investigating mitochondrial dysfunction related to human diseases. Since platelets do not contain a nucleus, mtDNA characterization will not be interfered from chromosomal DNA (20). T6392C and T6962A sites of COI gene showed a low variant frequency in the European population in Cambridge Human Mitochondrial Database (21). However, there is a lack of investigation of COI gene in the Asian population. Therefore, in this study, we investigated whether these two COI variants, as well as other potential variants, from platelet mitochondria could be associated with the occurrence of CBP in Chinese population in Asia. It would provide insights into variant frequency of COI gene in different populations for future researches on poisoning by benzene and its relative analogues.

A total of 44 CBP patients and 57 healthy persons were recruited from several major factories in Shenzhen, China as our cases and controls with agreement. Written informed consent was obtained from all patients and volunteers before sample and data collection. Benzene poisoning diagnosed from 2010 to 2016 by local authorized Occupational Disease Diagnostic Team has included (I) total WBC counts <4,000 µL or WBC counts between 4,000 and 4,500 µL and platelet counts <80,000 µL, with repeated confirmation of these counts after a few months in a peripheral blood examination; (II) documented benzene exposure as a result of employment in the factory for at least 6 months; and (III) the exclusion of other known causes of abnormal blood counts, such as chloromycetin use and ionizing radiation. The medical records of these patients were independently reviewed by at least two hemopathologists, particularly those with WBC counts >3,500 to confirm the CBP diagnosis. The diagnostic criteria for occupational CBP are provided by the Ministry of Health and Family Planning Committee. Diagnostic criteria for severe CBP is defined on the basis of chronic poisoning with at least one of the following manifestations, complete cytopenia, aplastic anemia, myelodysplastic syndrome and leukemia, while that for mild CBP is defined on the basis of a long history of close contact with benzene, associated with symptoms such as dizziness, headache, fatigue, insomnia, memory loss or infection. The cases and controls donated 2 mL of venous blood and their demographic data were recorded. The subjects were administered a rigorous physical examination in Shenzhen Occupational Disease Hospital. Ethical approval of the study was granted by the Ethics Committee of Shenzhen Prevention and Treatment Center for Occupational Diseases.

Peripheral blood (2 mL) was collected in EDTA tubes. The bloods were centrifuged at 100 g for 15 min immediately, and the supernatant was platelet. Nucleic acids were extracted from the platelet by extraction kit (Sangon DNA Mini Kit), according to the manufacturer’s instruction. DNA quantity was assessed by the spectrometer (NanoDrop). The measured DNA was stored at −80 °C until analysis. 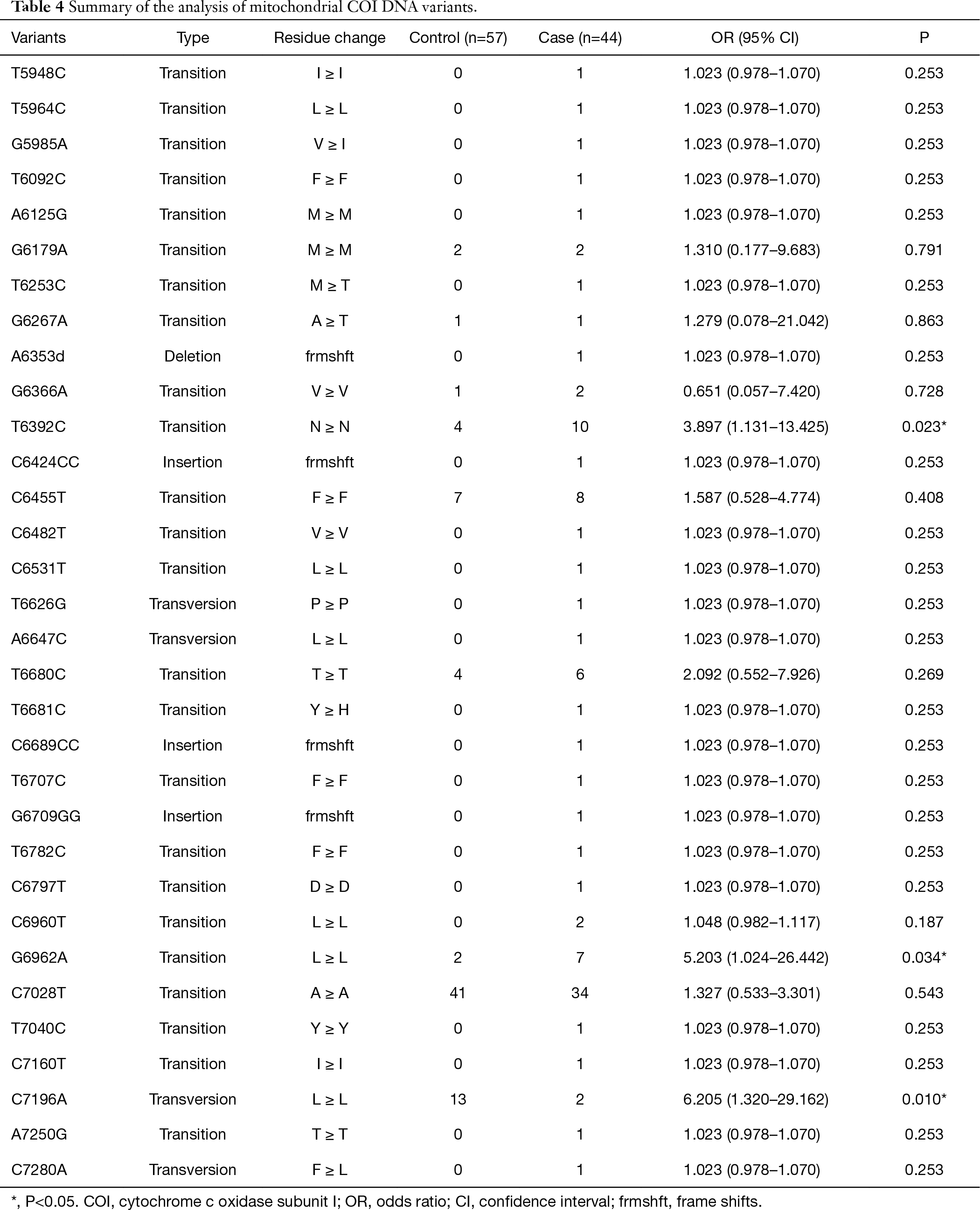 Analysis of the correlation between variants and benzene poisoning

There was no difference in benzene poisoning parameters, WBC and PLT, between the wild and the variant of the cases and controls (Tables 5,6). Genotype differences do not affect WBC and platelet baseline levels and diagnostic thresholds.

In the present study, we investigated platelet mtDNA and screened the COI gene of CBP and healthy individual. The number of COI variants was greater in cases [33] than in controls [9]. These variant changes might affect the expression level of the COI protein with the other subunits as the location and the type of this variants could affect the transfer of electrons from reduced cytochrome c to molecular oxygen (22). These variants may play a role in oxidation damage by increasing the production ROS production during mitochondrial oxidative phosphorylation. The resultant ROS are mitogenic, and may result in increased sensitivity to benzene metabolism products, which in turn leads to toxicity and increased risk of CBP (23). Indeed, high ROS release from respiratory chain is known to reduce synthesis of the blood cells (24). Besides, the mutation in COI gene, impairing the transcription of corresponding mRNA, reduces the overall activity of the COI for respiratory regulation in mitochondria, thus results in low ATP synthesis for energy supply (25). A total of 95% of energy supply from ATP is provided by mitochondria, and the ATP is required for blood cell synthesis (26) Therefore, high ROS level or reduction in ATP synthesis in mitochondria due to CBP will lead to lower blood cells level of an individual. The above phenomenon is matched with the clinical diagnostic markers, which are the reduction in WBC and PLT, in patients with mild or severe CBP. Lower WBC count is found in severe CBP than that of mild CBP implying the immune defensive system is impaired strongly with severe CBP.

In addition, we identified 4 COI frame shift variants in our study that were not reported previously. T6392C and G6962A of our findings distributed differently in the COI gene, which was previously reported in the Human Mitochondrial Database (http://www.mitomap.org). The T6392C and G6962A has been studied in various populations, none of which has shown a significant association with disease, even though the mutation was identified in all tested population (27). Although we did not find a significant association between the presence of one or more COI missense variants and CBP, our study provides insight for further study as there has been a lack of examination of variants in COI gene and the association between the variants and CBP from previous literatures.

Meanwhile, C7196A variant may have protective mutation effect, as certain alleles of mtDNA in certain halo-groups with protective or deleterious roles have been reported (13). Besides, repetitive and insertion and deletion mtDNA sequences associated with the benzene poisoning in Chinese population in Asia did not occur in this study. Indeed, some typical mtDNA variants, such as Mt4738C and Mt4738A have been found with a lower ROS production that could act against ROS associated conditions in mice (28). Further investigation of the mechanism in vivo, as well as human epidemiological studies on these mtDNA variants, will be beneficial to the understanding of the relationship between different variants and benzene poisoning. Nevertheless, further research will help to seek out the potential significance of the T6392C, G6962A and C7196A mutations in Asian Chinese CBP.

In this study, two platelet mtDNA variants, i.e., T6392C and G6962A, in COI gene are related to the CBP in Asian Chinese individuals, which has not been reported from Western individuals. Additionally, C7196A variant was found in Chinese individuals, and it might have protective mutation effect. These three mtDNA variants could be potentially used as the biomarker to facilitate the molecular detection to identify CBP or other occupational contraindications.

Funding: This work was supported by Medical Scientific Research Foundation of Guangdong Province (A2018165), Science and Technology Program of Shenzhen (JCYJ20160429090813380), the National Natural Science Foundation of China (No. 81502797). We thank all the volunteers who have participated in this study. We thank Huiming Liu from Hebei Northern Medical College for helping with the samples collection and processing.

Ethical Statement: Written informed consent was obtained from all patients and volunteers before sample and data collection. Ethical approval of the study was granted by the Ethics Committee of Shenzhen Prevention and Treatment Center for Occupational Diseases (ID: 2017116104245249).