Surgical resection is the main therapeutic method for mediastinal tumors (1,2). The common approaches for mediastinal tumor include sternotomy, thoracotomy, robot-assisted thoracoscopic surgery, video-assisted thoracoscopic surgery (VATS) and transcervical resection (TC) (3), and the selection of approach is based on the location of tumor in the mediastinum (4,5).

Median sternotomy is recognized as the gold standard for anterior mediastinal tumor over the last decades (6). However, sternotomy and thoracotomy are considered as more invasive approaches and associated with increased surgical trauma and postoperative complications, contributing to a prolonged hospitalization and long recovery time (7,8). Compared to traditional surgical management, both VATS and TC offer excellent operative visualization with a decreased postoperative morbidity rate due to their minimal invasiveness. In addition, patients’ subjective cosmetic satisfaction is significantly higher following VATS and TC approaches (9).

This study was approved by the Institutional Review Board of Tongji University.

The same surgical indications of VATS and TC were applied to patients with symptomatic mediastinal masses or masses highly suspected of thymoma. Patients with antero-superior mediastinal tumors were included. Patients were excluded from the study when they had a history of thoracic or cervical surgery, mass diameter was more than 5 cm on computed tomography scan, and mass directly invaded the surrounding tissue. All the patients were operated by the same group of operators. 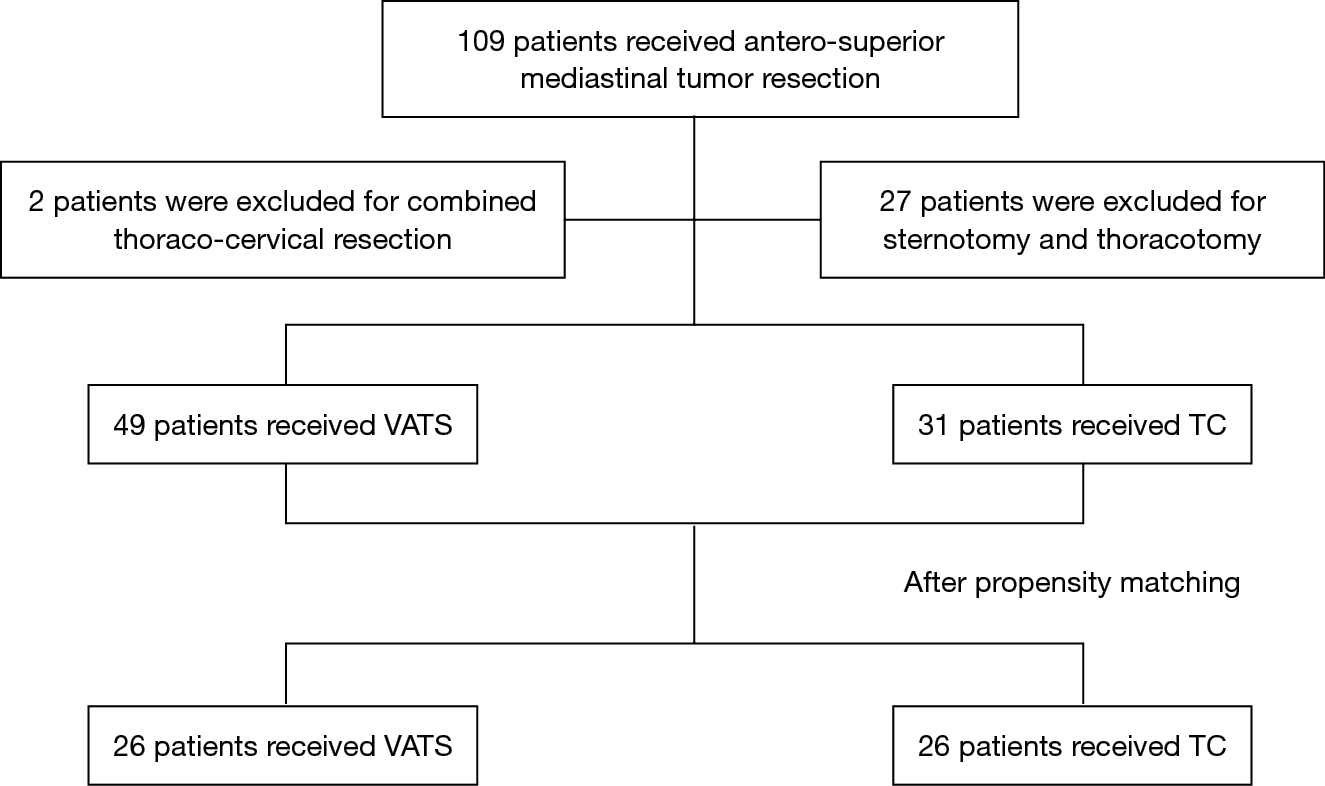 None of these patients had comorbidity and received adjuvant treatment. All the masses were evaluated by the chest computed tomography scan (Figure 2). Whether patients should receive surgical treatment was determined by the multidisciplinary team. Written informed consent was obtained from all patients before operation. Complete resection (R0) was achieved in all cases.

The perioperative analgesic protocol for patients were similar between two groups. A patient-controlled analgesic system with intravenous morphine was provided on perioperative day one. Oral oxycodone (5 mg) were administrated three times a day and stopped on postoperative day four conventionally. The intensity of postoperative pain was evaluated using a visual analog scale score ranging from 0 (no pain) to 10 (maximal pain). This scale was taken from the NRS numerical rating scale (20). Pain score was recorded in our hospital information system in the daily progress note.

Perioperative mortality was defined as death occurring during the same hospitalization or within 30 days after operation. Prolonged intubation was defined as intubation time longer than 48 hours after surgery. Prolonged chest tube drainage was defined as drainage time longer than 7 days. Criteria for chest tube removal included no air leakage, lung re-expansion and the postoperative drainage below 200 mL/day. Criteria for patient discharge were that routine blood test and blood biochemistry indices were in normal range. Postoperative evaluation was performed by the chest computed tomography scan at 6 and 12 months after surgery, and annually thereafter.

Our operative technique of TC was as follows: patients were positioned in a supine position on the operating table with an inflatable bag placed beneath the shoulder after general anesthesia and intubation. A 2–3 cm incision was made along the natural skin lines 2 cm above the sternal notch. The strap muscles were divided on the midline and the sternum was lifted with a sternal retractor. Retractors improved by our department were placed at the edge of the incision against the upward pull of the sternal support. Illumination was provided with a headlight on the surgeons (Figure 3). After complete resection of the tumors and surrounding tissues, the drainage tubes were inserted through the incision (Figure 4).

Figure 3 Our previous operative technique of TC. (A) The sternum was lifted with a sternal retractor and improved retractors were placed at the edge of the incision. (B) The exposure of the antero-superior mediastinum. TC, transcervical resection.

Figure 4 A relatively short incision by TC resection. (A) Drainage tube was place at the incision. (B) The incision healed nicely after operation. TC, transcervical resection.

Our operative technique of VATS was as follows: Patients were positioned in a 30° semi-supine position on the operating table with a roll placed beneath the shoulder and the ipsilateral arm held abducted over a padded L-screen to expose the axilla. Lung isolation was obtained with a double lumen endotracheal tube ventilation. The side we entered into the chest depended on the location of tumors. All the patients received single port VATS. A 3 cm incision was made in the 3th or 4th intercostal space at the anterior axillary line. After resecting tumors and the surrounding tissue completely, one chest drainage tube was placed at the end of the incision wound.

Continuous variables were expressed as mean value and standard deviation (SD) and were compared by independent-sample t-test or Mann-Whitney U test. Categorical variables were expressed as frequencies with corresponding percentages and were compared by Chi-square test or Fisher’s exact tests. For a more reliable comparison, we performed propensity score-based matching (TC:VATS =1:1) based on baseline characteristics (age, gender, tumor diameter and tumor characteristic: solid or cyst). Two-tailed P values of <0.05 were considered statistically significant. All calculations were analyzed with the Statistical Package for Social Sciences (SPSS) Statistics, version 22 (IBM Corp Released 2013. Armonk, NY, USA). 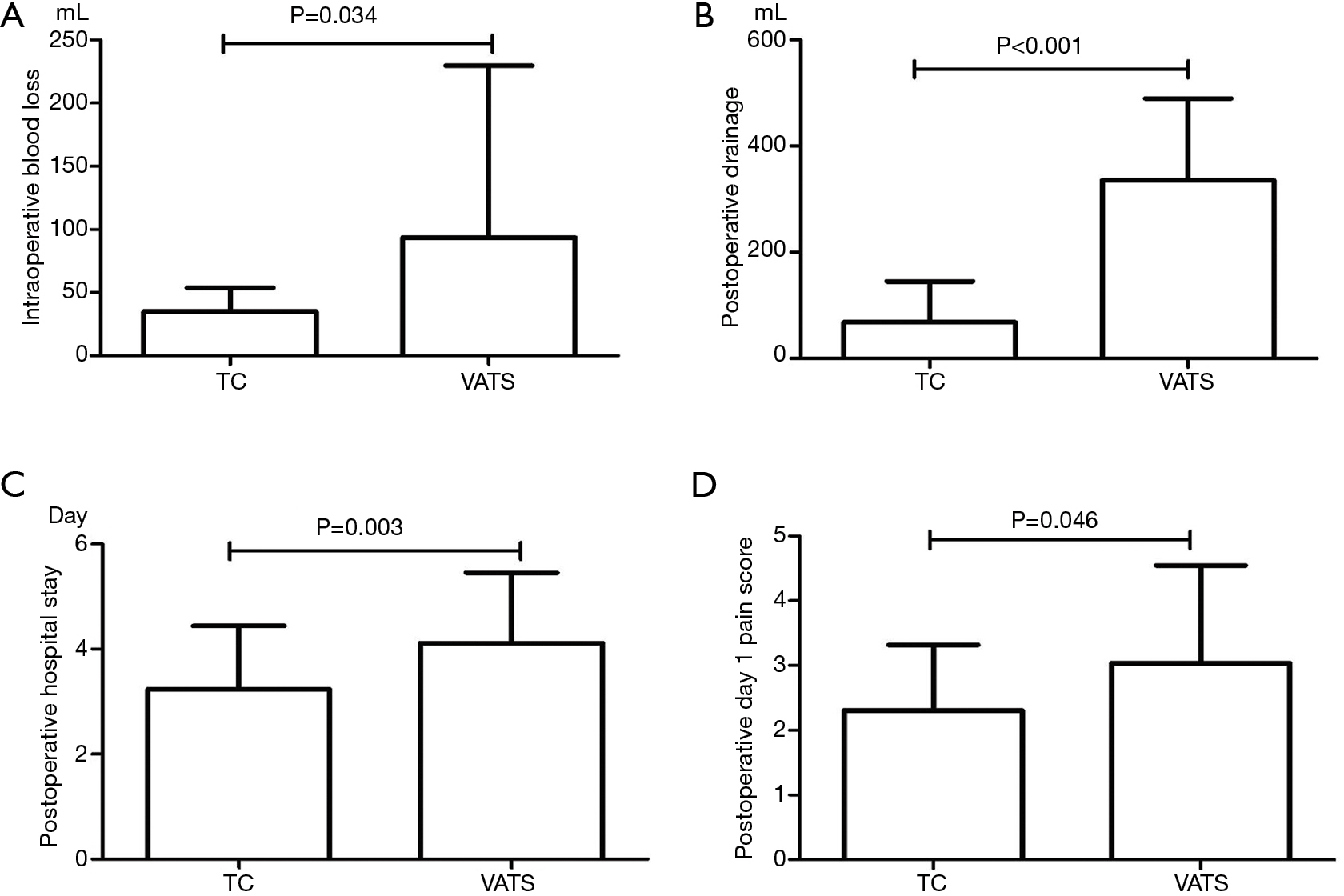 One patient in VATS group required conversion to thoracotomy due to intraoperative vessels damage and hemorrhage. Perioperative mortality was null in both groups. There was no complication in TC group, while one patient suffered from prolonged chest tube drainage due to the persistent air leak and two patients suffered from recurrent laryngeal nerve injury in VATS group.

TC resection was firstly described by Schumacher and Roth in 1912 (15). Since then, TC has been suggested to be a successful and safe approach in numerous cases (16-19). In 1988, Cooper modified the sternal retractors that improved the visualization of the anterior mediastinum, and the short-term follow-up revealed that transcervical approach conferred equivalent outcomes compared with sternotomy (21,22).

As mini-invasive an approach as VATS, TC represented an alternative approach in the treatment of mediastinal tumors. VATS has been demonstrated to be a safe procedure in the treatment of mediastinal tumors, and Wu et al. found uniport VATS was a safe and promising technique with short-term outcome not inferior to multiport VATS (13). However, whether TC was associated with better outcomes than VATS remained unclear. The study by Iacobone and colleagues including 51 TC patients and 12 VATS patients found that there was no significant difference between 2 groups in hospital stay, operative time, operative pain and cosmetic results, but the authors suggested that TC might be still less invasive because the selective single-lung ventilation could be avoided (5). In addition, VATS was reported to cause postoperative chronic pain and chest wall numbness in some cases (23,24). Deeb and colleagues suggested that TC is less invasive than VATS, particularly in terms of intercostal neuralgia (25).

To get a reliable result, we performed propensity score match between two groups. In our study, TC was less invasive with better perioperative outcomes compared with VATS, as indicated by the significant decrease in the incision length, Intraoperative blood loss, pain score on postoperative day one and postoperative stay. Moreover, there was no postoperative complication in TC group. No case in TC was converted to open surgery and required blood transfusion. However, in VATS group, two patients suffered from recurrent laryngeal nerve injury and one patient had persistent air leak, which could inevitably prolong their hospital stay. TC group was also associated with lower hospitalization costs. We thought two factors, the VATS-associated instruments and longer hospital stay, might pose the additional cost in the VATS group.

Despite the long history and excellent outcomes of TC, the indications for mediastinal tumors are still inconclusive. Iacobone reported that TC was preferred if tumor was in antero-superior locations (5). Callender found that only 25% of cases with tumors located more than 6 cm below clavicle were successfully performed by TC (26). Tumor in the deep location of mediastinum was considered as the main reason that TC failed. In addition, Deeb and colleagues reported that TC could be used when tumor size was less than 4 cm and the tumor did not invade surrounding structures in CT scan (25). However, several case reports showed that tumors more than 4 cm could also be accomplished by TC without any major complications and recurrence (27-29). Based on previous studies and our clinical experience, tumors invading surrounding structures and deep location tumors were considered as relative contraindication of TC resection, for it offered insufficient exposure when managing vascular and neural structures below the tumors. Therefore, we chose the antero-superior mediastinal tumors less than 5 cm in this study, and found that no postoperative complications occurred. We thought it was reliable to expand the diameter limitation to 5 cm for TC. TC was a safe and less invasive alternative for antero-superior mediastinal tumors less than 5 cm, especially when VATS was not viable, such as the cases highly suspected of pleural adhesion.

This study has some limitations. First, it is a retrospective study, surgeon preference may affect the comparison of two groups and selection bias cannot be excluded. Although propensity score match may reduce the confounders. Further validation from prospective study is needed. Second, the pathological result is a heterogenous cohort, all the cases included are benign tumors or are in very early stage thymoma, they all have a very good prognosis. Therefore, we conclude that TC is less invasive for anterior-superior mediastinal tumors when comparing the perioperative outcomes, and these results have poor correlation with postoperative pathology. The role of TC for malignant mediastinal tumors could be evaluated in the further study.

TC is a safe and reliable technique for antero-superior mediastinal tumor, with better perioperative outcomes compared to VATS in terms of Intraoperative blood loss, postoperative drainage, pain score on postoperative day one and postoperative hospital stay.

Ethical Statement: This study was approved by the Institutional Review Board of Tongji University (No. K18-112). Written informed consent was obtained from the patient for publication of this manuscript and any accompanying images.