In recent years, 3D printing has become widely used in the medical field, especially in surgical simulation, preoperative rehearsal, and the development of auxiliary surgical tools (3-8). Due to controversy regarding the hardness, stability, and quality of 3D-printed products, there are still few reports regarding the use of 3D-printed implants in the human. In addition, reports regarding the use of 3D printing technology in thoracic surgery remain limited, and it still remains unclear whether this technology can improve the accuracy and effect of surgery and reduce the rate of surgical complications.

The 3D model constructed using Amira software was used to design the surgical approach and method of operation. The surgical resection line of the tumor was drawn, an outline at least 2.5 cm around the malignant tumor (9). Then, the 3D implant plate was designed to perfectly match the excision margin. Simultaneously, according to the 3D printing model, the 3D morphology and spatial adjacency relationship of the tumor were re-observed, and the plans for tumor resection and thoracic wall reconstruction were applied.

Using to the 3D printing model, the homemade CNC and EDM equipment was used to produce point-to-point extrusion. The operating engineer set the processing parameters for one-time shaping based on the patient’s condition. During the process, a 3D engraving machine was used to create a 1:1 3D conformal titanium plate, followed by inspection, disinfection, and packaging.

Before surgery, we calculated each patient’s pulmonary function. We performed thoracic wall tumor resections in the patients. The excision range included the entire thoracic wall tumor, tumor-infiltrated ribs, costal cartilage, and intercostal muscle. The resection margin was at least 2.5 cm around the tumor. In the surgical margin, we collected tissue from the cutting edge and made frozen pathological sections to check for metastasis and so avoid incomplete excision. We located the 3D conformal titanium into the thoracic wall defect and fixed it to the thoracic wall with screws (Table 3).

We performed thin-layer high-resolution CT scan as a re-check 15 days after surgery, with a scan image resolution of 512×512 and a layer spacing of 0.7 mm. Then, 3D reconstruction of the 3D conformal titanium plate and the thoracic wall bone was performed, and the titanium plate insertion was re-checked. We also calculated the pulmonary function of the patients in the 3D group.

Strategy for the conventional method group

In a further follow-up after 3 months, the patients were reexamined by the surgeon, which included pain and CT exams.

SPSS 22.0 statistical software was used for statistical analysis. Data were expressed as the frequency and percentage for categorical variables and the mean ± standard deviation for continuous variables or the median and inter quartile range (IQR). All demographic data, clinical data and laboratory findings (non-normally distributed variables) were compared between the two groups using the Wilcoxon signed rank test and Mann-Whitney U test for other variables. To compare the proportions of patients, χ2 test or Fisher exact test was performed. All statistical tests were two-sided and significance was defined as P<0.05.

We successfully constructed 3D digital models of thoracic tumors and their adjacent structures and reconstructed thoracic walls. The adjacent structures included pulmonary blood vessels, lungs, bronchi, ribs, sternum, and costal cartilage (Figure 1). The tumor volumes ranged from 8.8–2,208.5 cm3 (Table 1). Case 1 had the largest tumor volume. This tumor protruded into the left anterior and inferior thoracic wall and the sternum (Figures 1A,2). Case 6 was Ewing’s sarcoma, which was located in the posteromedial lateral thoracic wall (Figure 1F). Case 4 was neurilemmoma, 552.5 cm3 that protruded substantially into the outer side of the sixth to ninth chest ribs (Figure 1D). Case 5 was breast cancer recurrence, which was located in the third to fifth ribs of the right anterior thoracic wall, with invasion of the sternum (Figure 1E). 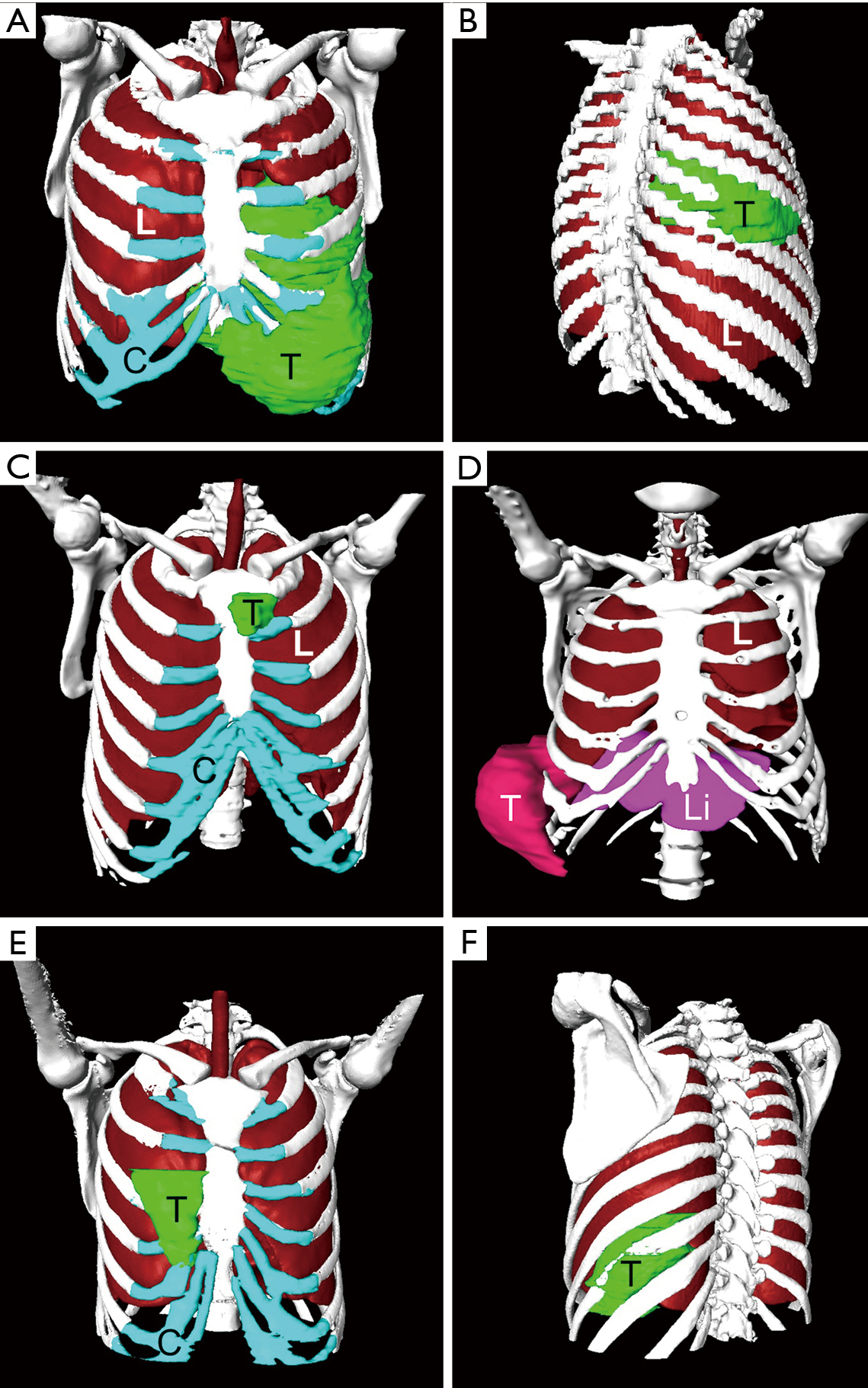 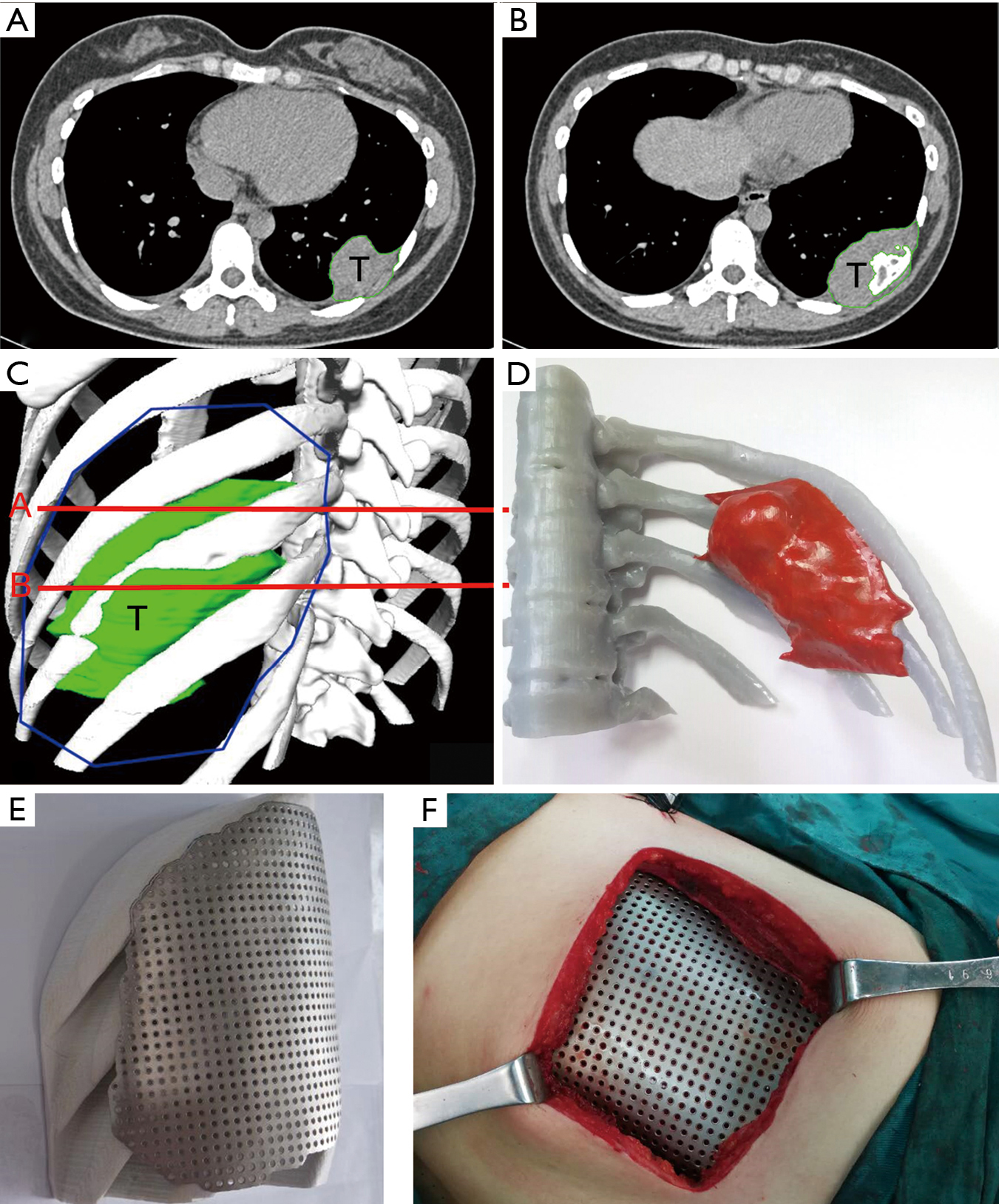 Based on the 3D reconstruction model, we successfully 3D printed the model using a photosensitive resin printer and studied the 3D morphology and the spatial relationships of the tumor. The scope of the surgical resection and the size, area, space location, and shape of the resected thoracic wall were clarified to provide enough information prior to surgery. The 3D conformal titanium models were successfully designed and created (Figures 3-5). 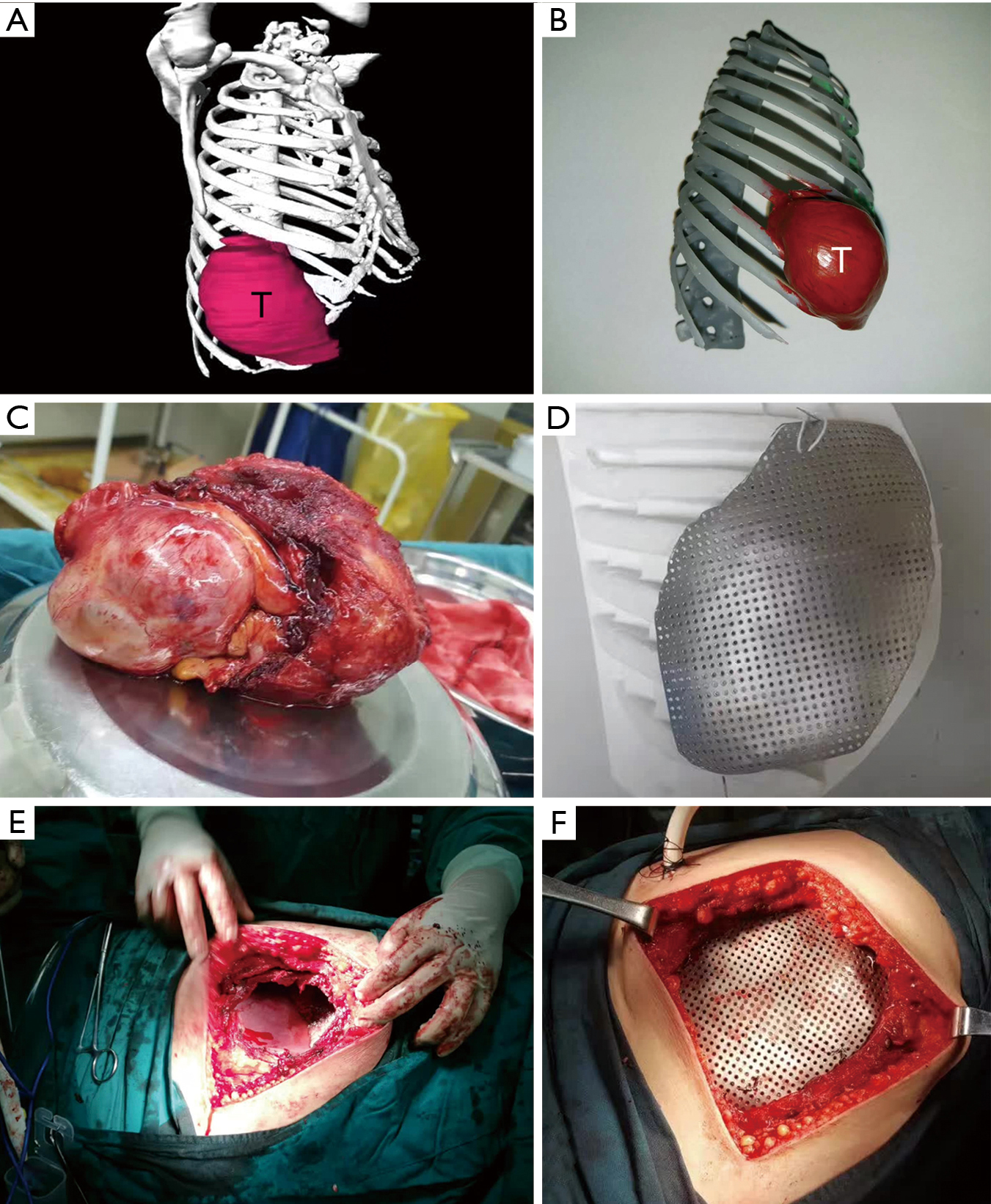 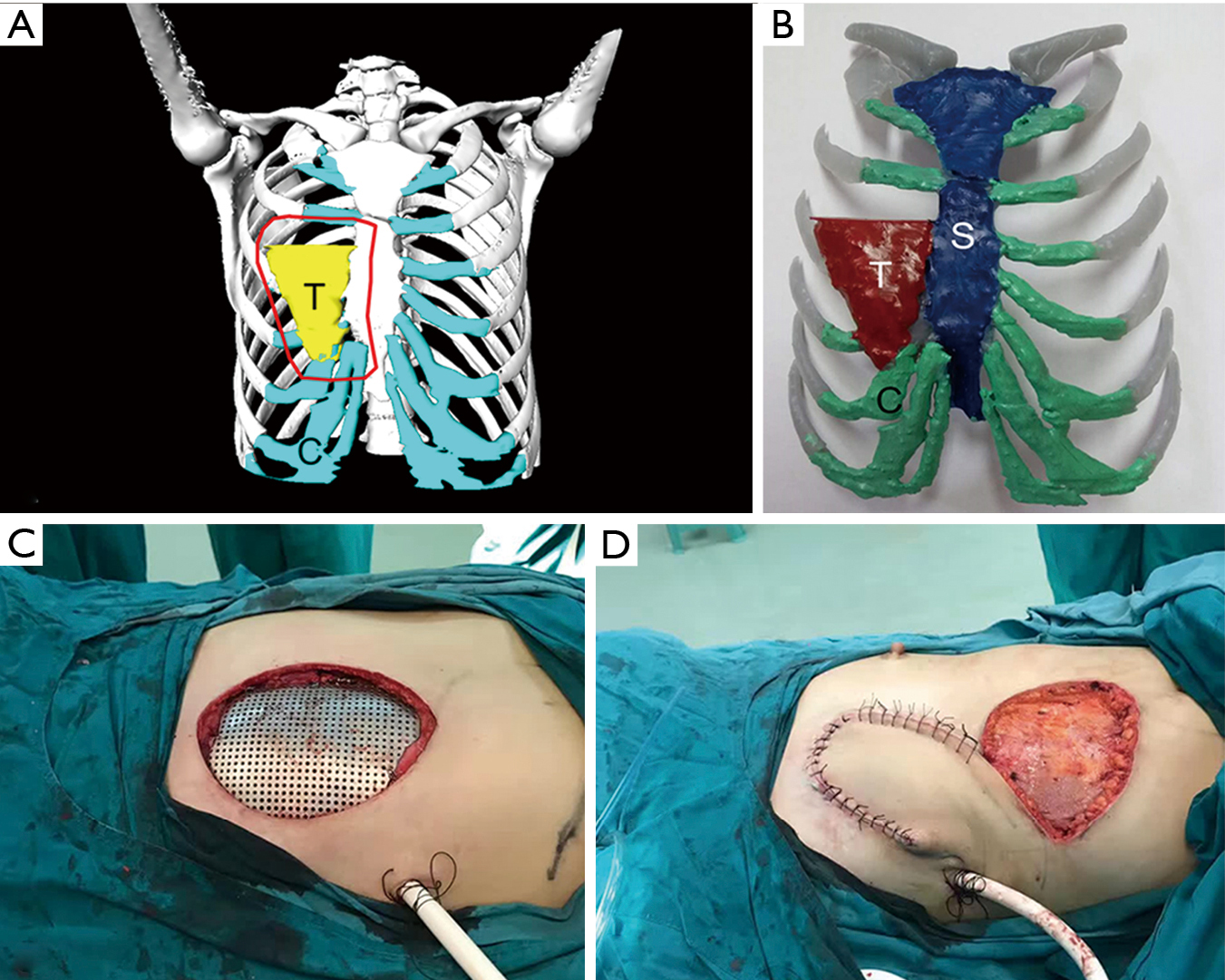 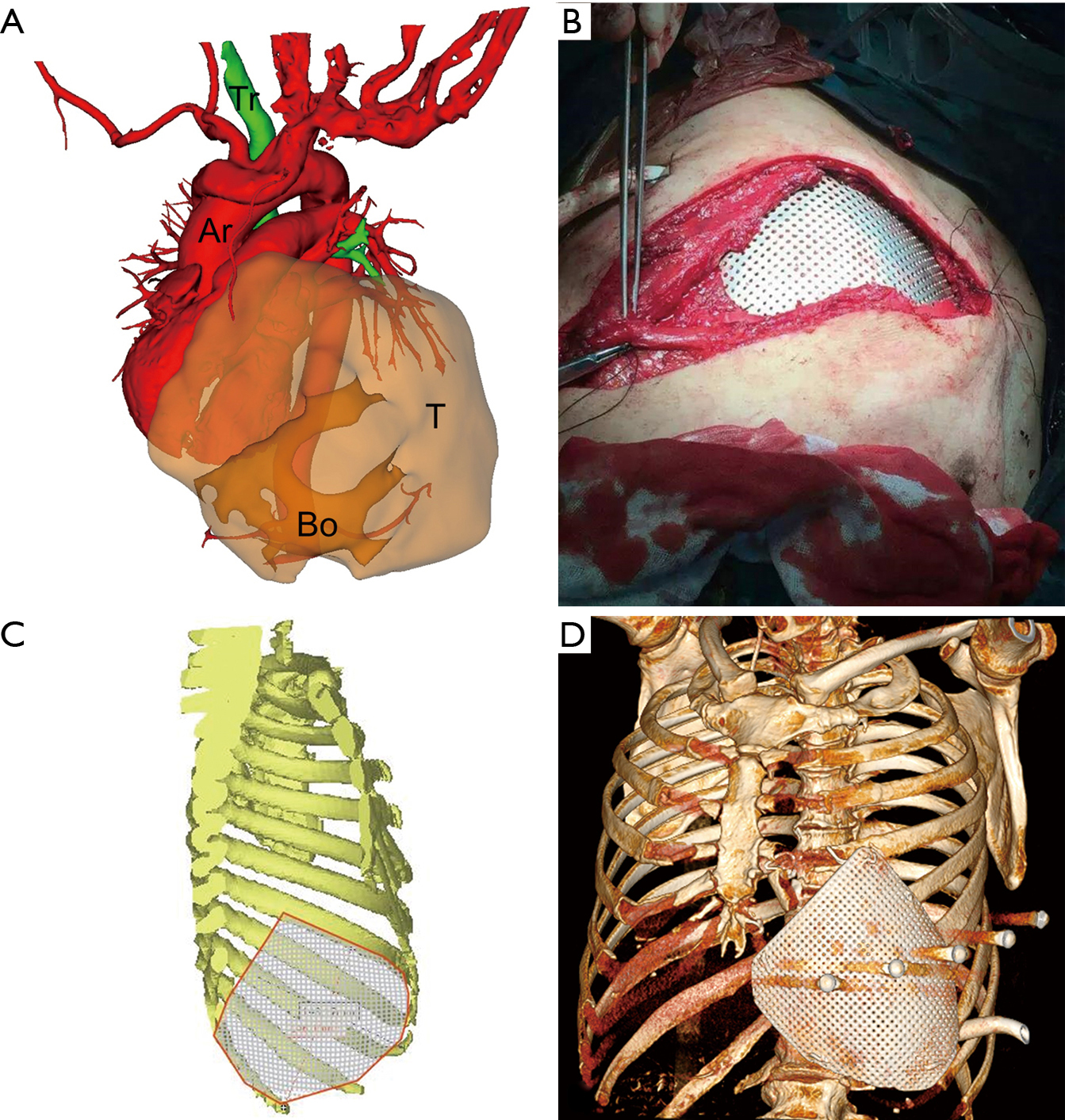 We successfully completed the thoracic tumor resection and thoracic wall reconstruction. Since the tumor in case 1 was large, diaphragmatic and pericardial repair were performed (Table 3). The recurrent breast cancer patient (case 5) had thoracoabdominal wall flap metastasis; so we performed flap transplantation. The skin was obtained from the right femur. Although the sizes of the resected tumors were different (Table 1) and the volume of these tumors was relatively large, the 3D-shaped titanium plates were completely consistent with the thoracic wall defect. In 3D-printing group, the surgical bleeding was less, and the patients had good curative effect and recovery (Table 4).

According to the 3D reconstructed images by CT scan (Figure 4) at 15 days after operation, it was found that titanium plates produced with the assistance of 3D printing were completely consistent with the thoracic wall defect sites in all 6 cases (Figure 2D). No fixed titanium plate displacement was observed, and patients had good postoperative activity, good respiratory movement, and no abnormal respiratory movements.

According to the CT exam performed 90 days after surgery, in the 3D-printing group, there were no postoperative complications in the 3D-printing group, such as hemorrhage, pneumothorax, fixed titanium plate displacement, metastasis, or abnormal breathing. However, in the conventional methods group, 4 patients showed such complications as infection and puncture of the artery or skin by the titanium plate (Tables 3,4). The post-operation pain score was lower than in the conventional methods group (Tables 2,3).

The pulmonary function of the patients in 3D group showed no significant difference before and after the operation (P<0.05) (Table S1).

Table S1 Pulmonary function before and after operation
Full table

3D printing technology is widely used in medicine, including such fields as orthopedics, plastic surgery, maxillofacial surgery, dentistry, and urology (3-8). 3D printing is mainly used for auxiliary diagnosis, surgical design, and surgical rehearsal. Resection of the sternum, rib and cartilage requires thoracic wall reconstruction using a material that permits stabilization of the chest, ensures proper respiratory function, and protects the thoracic organs (10). To date, no treatment scheme has been established for the thoracic wall. There is a general consensus that every malignant tumor should be removed entirely, ideally with 2–5 cm margins of healthy tissue (11). The choice of chest reconstruction depends on the size of the defect and operator preferences. Defects of <5 cm in diameter do not usually require rigid implant reconstruction (12,13). Therefore, for resection of larger sternal and rib fragments, it is often recommended that they be replaced with homogenous or allogeneic material.

The range of implants used in the thoracic wall is very broad. The most commonly used materials are methyl methacrylate (10), titanium (9) coated with sealed prolene mesh from inside and outside of the thoracic wall, Marlex, polytetrafluoroethylene, and Vicryl. In addition, for the Ley’s prostheses in the form of a footprint-shaped titanium plate fixed to the ribs with metal threads, 8 sternum and rib fragments made of 3D-printed titanium (14,15) are also used; however, this 3D technology is expensive, and 3D printing has yet to undergo ethical review. Silicone implants based on patients’ chest prints prior to surgery can be used as a less expensive surgical option, but they have the most complications, including seroma formation (31%) and lower aesthetic satisfaction (only 69%). This patient had a severe physical examination (PE) deformity and in retrospect would have been a better candidate for thoracic surgical correction at a young age because the implant was not very hard (16). Autografts of osseous tissue and muscle fragments and allografts of the sternal fragment can be obtained from deceased donors (11). However, these implants are less rigid and do not resist stress from respiration, thoracic support, or load-bearing. An implant should be resistant to the forces that act on the skeleton in the chest but pliable enough to adjust it according to the size of the sternum defect, translucent under X-rays, and made of a material that resists bacterial growth (10). Polyethylene appears to be a good material for sternal implants because it is rigid and non-absorbable and it does not react with bones, soft tissues, or body fluids. It has proper rigidity and resistance but it is radio-opaque on X-rays. It can be fixed to metal plates (titanium, surgical steel) and bones using screws. However, it is not recommended for joints as an endoprosthesis because it is prone to surface abrasion, which can be harmful.

Reconstruction procedures after sternum resection are difficult and are complicated by a significant percentage of cases with complications—estimated between 33% and 46%. The most often observed complications are those associated with respiratory disorders (16). Other known complications associated with sternum implants are chronic pain, chest deformations, local pleural thickening, and necrosis of pedicle muscle lobes (9), mediastinitis, and loosening of the implant mounting, resulting in instability of the chest. Sternal implant fractures have also been reported (17). A conventional titanium plate is flat and rectangular, and it does not line up with the broken ends of bone defects, does not fit the thorax, shifts easily, and wears through the skin, causing postoperative pain and hematoma. The 3D printing of titanium alloy implants remains controversial in surgery. Due to their hardness and strength, titanium alloy 3D implants have yet to be approved by hospital ethics committees and they bring on certain medical risks. Nevertheless, it is feasible to use 3D printing to assist the formation of titanium plates, as the titanium plate prior to 3D printing has passed FDA certification.

3D digital navigation and printing technology are used in tumor resection and reconstruction of the chest in the field of thoracic surgery, which helps surgeons better understand the preoperative thoracic wall tumor site, 3D morphology, invasion range, and spatial adjacency relationships, and helps thoracic surgeons make preoperative surgical plans and conduct surgical rehearsals. The 3D-printing-assisted titanium plate completely conforms to the three-dimensional shape of the thoracic wall, thereby improving the curative effect of the surgery, shortening the operation time, and substantially reducing the abrasion of the implant on the residual sternum, ribs, thoracic wall muscle, and pleura. No surgical complications, such as bleeding or abnormal breathing, were observed in 6 cases, but in the conventional methods group, 4 patients had such complications as infection and puncture of the skin or artery by the titanium plate. Moreover, the cardiothoracic implants designed by 3D printing were used to fill the thoracic wall, which played an important role in protecting the contents of the thorax, such as the heart and lungs, and did not involve bearing weight or strenuous exercise. Therefore, the biomechanical requirements of the 3D conformal titanium plate were lower than those of orthopedic load-bearing parts, rendering the procedure easier.

3D conformal titanium plates are not prone to show dislocation or displacement postoperatively. They do not rub against the thoracic wall during normal breathing, thus avoiding local thoracic wall injuries and hematomas. Patients showed little bleeding, except for the 1,500 mL blood loss in one patient with a large chest tumor. Surgical bleeding was only 100–200 mL in the remaining patients, reducing both blood transfusion costs and the risks of transfusion. The 3D conformal titanium itself is made of titanium alloy. It has a rigid structure, does not deform postoperatively, and resists gravity and tension caused by breathing and tensile forces. The recovery time is greatly shortened, decreasing from two weeks to one week. Moreover, the 3D conformal titanium plate is not actually a 3D-printed titanium plate and thus is consistent with FDA certification and is easy to implant.

Ethical Statement: The study was approved by the Ethical Committee of Southwest Hospital (IRB number: KY201846). Informed consent of the operation was obtained from all patients before surgery.