Cough is a common complaint in children, and can develop into chronic cough, mainly including protracted bacterial bronchitis, asthma, upper airway cough syndrome (UACS) (1). Airway inflammation is the basis for most types of chronic cough (2), and inflammatory markers in the airways are very important for the diagnosis of chronic cough. Based on this characteristic, noninvasive therapies, such as fraction of exhaled nitric oxide (FeNO) and sputum testing, have been developed to detect eosinophilic airway inflammation (3,4).

Traditionally, sputum testing has been used to detect airway inflammation, but it is operator-dependent and time-consuming. FeNO has been developed in recent years as a new technology to detect airway inflammation. Clinical evidence suggests that the FeNO level can be used to monitor airway inflammation with high specificity and sensitivity, and reflect the level of inflammatory markers in bronchoalveolar lavage fluid (BALF) (3,5). Moreover, the FeNO level is closely correlated with the results of bronchial provocation tests in patients with bronchial asthma, as well as in those infected by Lactobacillus acidophilus. Several studies have demonstrated an association between an increased FeNO level and the degree of airway inflammation. The FeNO level is increased before asthma and pulmonary dysfunction (6). One study found that the FeNO level decreased after anti-inflammatory therapy using glucocorticoids for 1 week, and is often associated with airway secretions and changes in BALF components (7). The value of using FeNO as a marker of airway inflammation in asthma has been demonstrated (8,9), while its clinical importance in chronic cough has not been well studied.

The study protocol was approved by the Ethics Committee of Suzhou University (SZU2012-C133; Suzhou, China). Written informed consent was obtained from all parents and children recruited into the study.

This prospective single-center study was conducted at the Children’s Hospital of Soochow University (a tertiary hospital that provides services for most children in Suzhou) from January 2012 to December 2014.

Inclusion criteria were: patients aged 6–14 years with cough of duration >4 weeks; cough was the main symptom; lesions were not observed upon chest radiography; use of drugs that could affect the FeNO value had been stopped for >2 weeks.

Healthy schoolchildren with normal indices of lung function and without acute respiratory infection within the previous 4 weeks were enrolled as controls.

Diagnostic criteria (Table 1) were based on clinical guidelines set by the American College of Chest Physicians for evaluating chronic cough in children (13). A questionnaire on drug treatment was completed. FeNO measurement was done in patients with no lesion shown on chest radiographs. Furthermore, patients underwent spirometry, sputum induction, complete blood count, differential diagnosis of common pathogens for cough. Cough score was recorded by physician. In patients with variable airflow limitation, an increase in FEV1 of ≥12% predicted after the administration of a bronchodilator (two puffs of albuterol administered via a mask) indicated the presence of reversible air flow limitation. 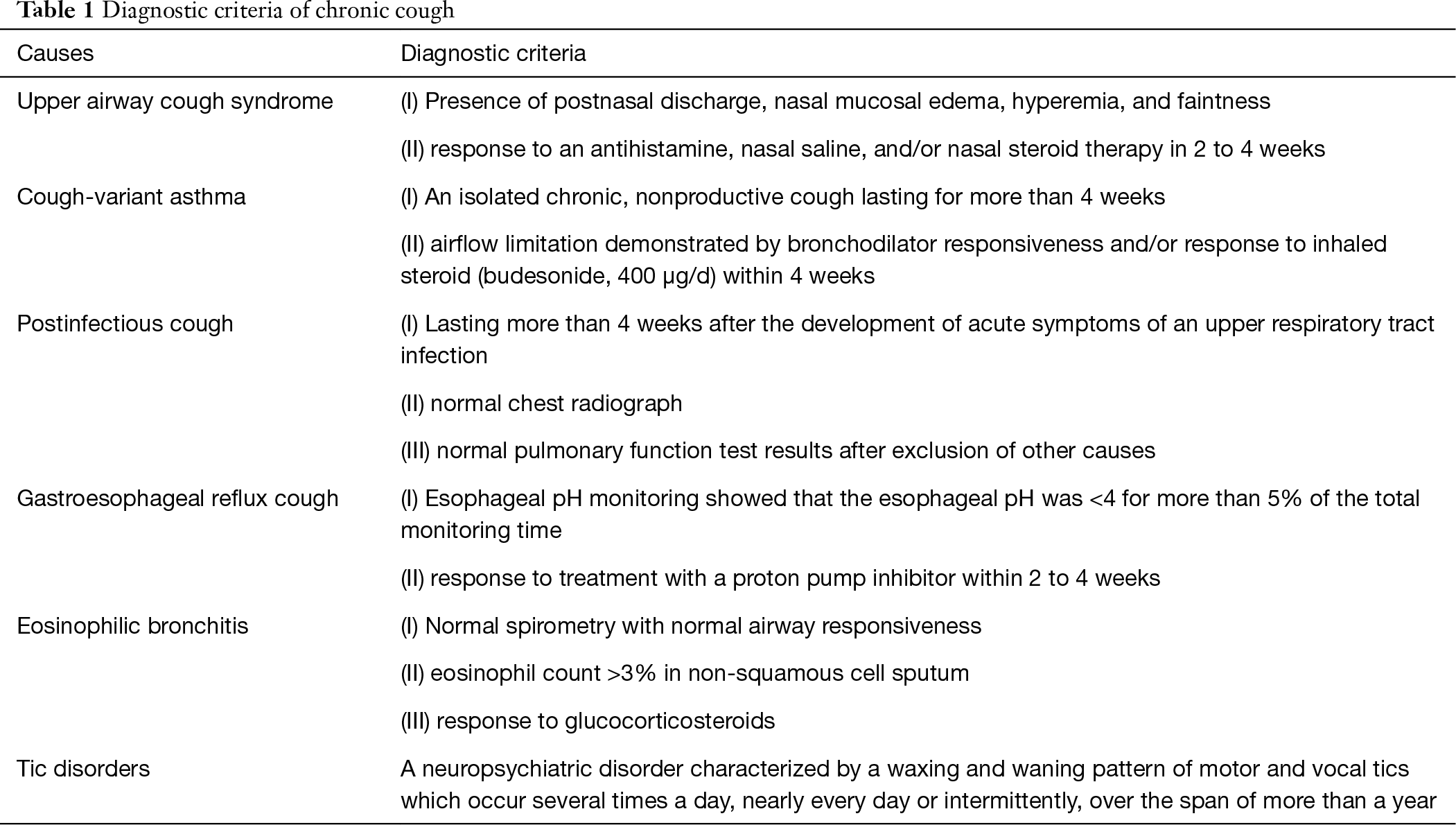 Cough score was defined as a validated verbal category cough scale scoring daytime plus nighttime cough scores (14). This is a validated verbal category score that has been previously used in chronic cough studies in children (14,15). Briefly, daytime scores were as follows: 5 = cannot perform most usual activities due to severe coughing; 4 = frequent coughing which interferes with school or other activities; 3 = frequent coughing but does not interfere with school or other activities; 2 = cough for more than two short periods; 1 = cough for one or two short periods only and 0 = no cough. Nighttime scores were as follows: 5 = distressing cough; 4 = frequent coughs most of the night; 3 = frequent waking due to coughing; 2 = awoken once or awoken early due to coughing; 1 = cough on waking or on going to sleep only and 0 = no cough at night.

Vital capacity was measured using standard instrumentation (MasterScreen; Jaeger, Hoechberg, Germany) in accordance with the standards set by the European Respiratory Society (16). Forced expiratory volume in one second (FEV1) and the FEV1: forced vital capacity (FVC) ratio were chosen as indices for analyses. The lung function of participants with FEVl% predicted >70% was assessed using a personal computer-based spirometer (microQuark; COSMED Rome, Italy) by a quantitative jet-atomization dosing device with histamine phosphate as the excitatory drug. A bronchial provocation test was deemed “positive” if FEV1 decreased by 20% before the final step. During the test, the amount of histamine phosphate was recorded automatically. The test was defined to be “negative” if FEV1 decreased by <15% when the maximum amount of histamine phosphate was inhaled.

When the baseline FEV1 after salbutamol inhalation was >70% predicted, a 3% hypertonic saline solution was inhaled via an ultrasonic nebulizer for 10 min, as described previously (17). Inhalation was discontinued if sputum was obtained or if the FEV1 decreased by >20%. CytospinTM slides were prepared and stained with hematoxylin and eosin, and a differential cell count obtained from 400 non-squamous cells. Only samples with cell viability >70% and squamous-cell contamination <20% were considered (18).

Statistical analyses were carried out using SPSS v19.0 (IBM, Armonk, NY, USA). Data are expressed as numbers with percentages or as the mean ± SD, as appropriate. The one-sample Kolmogorov-Smirnov test was used to assess the normality of data. Normally distributed continuous variables were compared using the Student’s t-test. Analysis of variance was done to evaluate differences among groups. Based on the corresponding sensitivity and specificity at a cutoff value of FeNO, a receiver operating curve (ROC) was constructed with 1-specificity as the abscissa and sensitivity as the ordinate. P<0.05 was considered significant.

A total of 127 patients met the inclusion criteria, of which 12 declined FeNO measurement. The remaining 115 cases were enrolled in our study. The 12 patients who were excluded did not differ significantly from included patients in terms of mean age at disease onset and sex.

Of these 115 patients, 23 had CVA, 30 had CVA + UACS, 45 had UACS, and 17 had other causes (PIC, GERC, and transient tic disorder). Twenty-five healthy people comprised the control group. Baseline characteristics are shown in Table 2. No significant difference between the groups in terms of age, sex, height or weight was recorded. 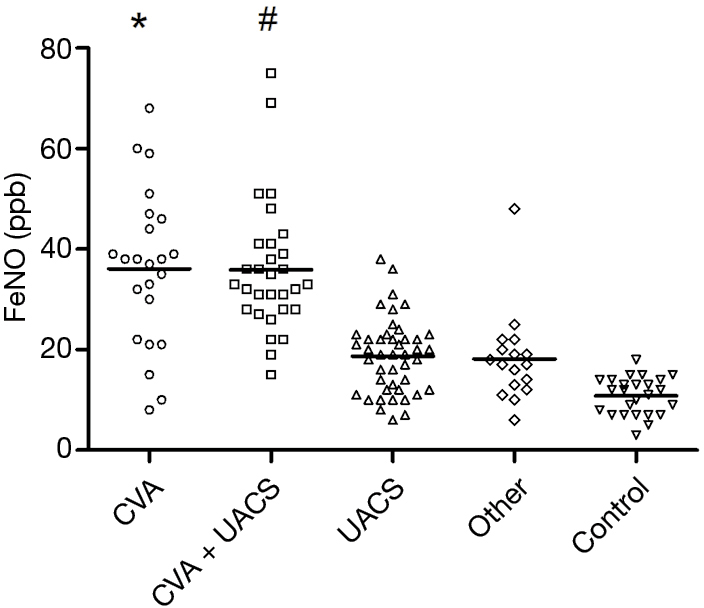 CVA detection based on FeNO, eosinophil count and PD20

Correlation between the FeNO level and PD20, eosinophil count in sputum, and lung function

Table 4 FeNO level, sputum EOS% and cough score comparison of before and after the 4-week treatment in children with CVA, CVA + UACS and UACS
Full table

CVA is relatively common among preschool and school-age children (19,20). Based on data from 115 children with chronic cough and 25 healthy controls, we discovered that the optimal FeNO cutoff value was 25 ppb, with a sensitivity of 84.0%, specificity of 97.1%, PPV of 97.5%, and NPV of 81.4%. Moreover, the FeNO level had a significant correlation with eosinophil count in sputum, cough symptom score, and cough score. The decrease in FeNO level was related significantly to the degree of decrease in the eosinophil count in sputum. Thus, we suggest that FeNO measurement may be useful in CVA diagnosis.

The FeNO level and eosinophil count in sputum have been recognized as important markers of inflammation (21,22). We found that a diagnosis based on the FeNO level can show similar sensitivity to that of sputum testing and bronchial provocation tests. However, with respect to safety and resource consumption, FeNO measurement would be a better choice.

Several demographic and biologic factors can affect the FeNO level: smoking (23), age (24), and immunoglobulin-E level (25). In the present study, the background of enrolled cases (height, age, sex, and body mass index) was adjusted. The FeNO level of children with CVA was significantly higher than that of healthy cases and children with UACS. Similarly, Scollo and colleagues reported that the FeNO level in CVA patients was obviously higher than that of patients with cough due to other causes (26). Also, in children with CVA, the eosinophil count in sputum showed an identical trend with the FeNO level, suggesting the important role of the latter for CVA diagnosis.

The present study had two main limitations. First, we included only school-age children (6–14 years) in the present study. The relationship between the FeNO level and chronic cough in younger children was not established. Second, data were obtained from a single center. Only multicenter studies can ensure precision, reduce selection bias, and increase the generalizability of the data accrued.

In children, FeNO measurement might be a good method for diagnosing CVA with high sensitivity and specificity.

We thank Arshad Makhdum, PhD, from LiwenBianji, Edanz Group China (www.liwenbianji.cn/ac), for editing the English text of a draft of this manuscript.

Ethical Statement: The study protocol was approved by the Ethics Committee of Suzhou University (SZU2012-C133; Suzhou, China). Written informed consent was obtained from all parents and children recruited into the study.