Based on 18 tertiary referral centers in 14 provinces, the Chinese Alliance for Research in Thymomas (ChART) has built up the first national database for thymic malignancies, now containing more than 2,500 treated cases during 1994–2012 (10). However, northwest China was not covered with ChART, despite the potential influence of weather, longitude, ethnic difference on the incidence of TETs. Most large sample thymoma studies have been reported in south China (11-14) and the feature of TETs in northwest China remains unclear.

Because thymus is the site for T cell maturation, most thymomas present a thymopoietic activity, accounting for the possible onset of autoimmune disorders, of which myasthenia gravis (MG) is by far the most common to affect 30–50% of thymoma patients (15,16). The possible inter-relationships between clinical variables in thymoma patients were investigated in a single-center (17) study and a multi-center (18) study in European countries but not China.

We hereby reported the results of a single-center study from a high-volume northwest China institution for TETs surgery, with the aim of revealing the epidemiological features of TETs, evaluating how the most important variables may influence the others and investigating the diagnostic efficacy of multiple imaging modalities for TETs.

This retrospective single-center study was approved by the ethics committee of Tangdu Hospital of the Fourth Military Medical University (TDLL201608-13), and informed consent was waived. Between January 2004 and December 2015, a total of 603 TETs (including 23 TCs) patients received thymectomy in our hospital. Patients with primary neuroendocrine tumors of the thymus, with an inoperable lesion or receiving tumor biopsy only were excluded. Preoperative standard work-up included routine blood tests, electrocardiography (ECG), echocardiography if required (in case of invasive lesions or high-risk patients), pulmonary function tests with diffusion capacity (diffusion lung capacity for carbon monoxide) and arterial blood gas analysis, neurological consultation to rule out MG according to the clinical status, and total body computed tomography (CT) scan. Histology was assessed according to the 2004 World Health Organization (WHO) classification. TETs were classified as type A, AB, B1, B2, B3 or TC (19).

For the inter-relationship evaluations, the following clinical variables were assessed: WHO histology, MG, tumor size, age and gender. For the statistical analysis, we dichotomized WHO histology [(I) A + AB + B1; (II) B2 + B3 + TC], tumor size [(I) maximal tumor diameter <4 cm; (II) maximal tumor diameter ≥4 cm] and age [(I) age <40 years; (II) age ≥40 years] into two categories, as we did in our previous publication (20). Because the Masaoka-Koga staging system was not introduced in our hospital until 2014, we could not define the TETs staging in the current study and thus Masaoka-Koga stage was not included for the inter-relationship analysis.

To investigate the diagnostic efficacy of varied imaging modalities for TETs, a retrospective chart review was performed at the Picture Archiving and Communications Systems (PACS) containing all medical images for pathologically confirmed TETs patients from January 2004 to December 2015. Three radiologists (Xiu-Long Feng, Yong-Kang Xin and Sha-Sha Zhao) reviewed all images and diagnostic reports on the PACS. The diagnostic accuracy was analyzed by comparing the image diagnosis and pathology results as correct diagnosis and misdiagnosis.

Univariate and multivariate analyses were performed to reveal the factors affecting the incidence of TETs. For the inter-relationship evaluations, we considered the following 5 variables: WHO histology subtypes (WHO A/AB/B1 vs. B2/B3/TC), MG status (yes vs. no), gender (male vs. female), maximal tumor diameter (<4 vs. ≥4 cm) and age (<40 vs. ≥40 years). Odds ratio (OR) and corresponding 95% confidence intervals (95% CIs) were provided for each model. 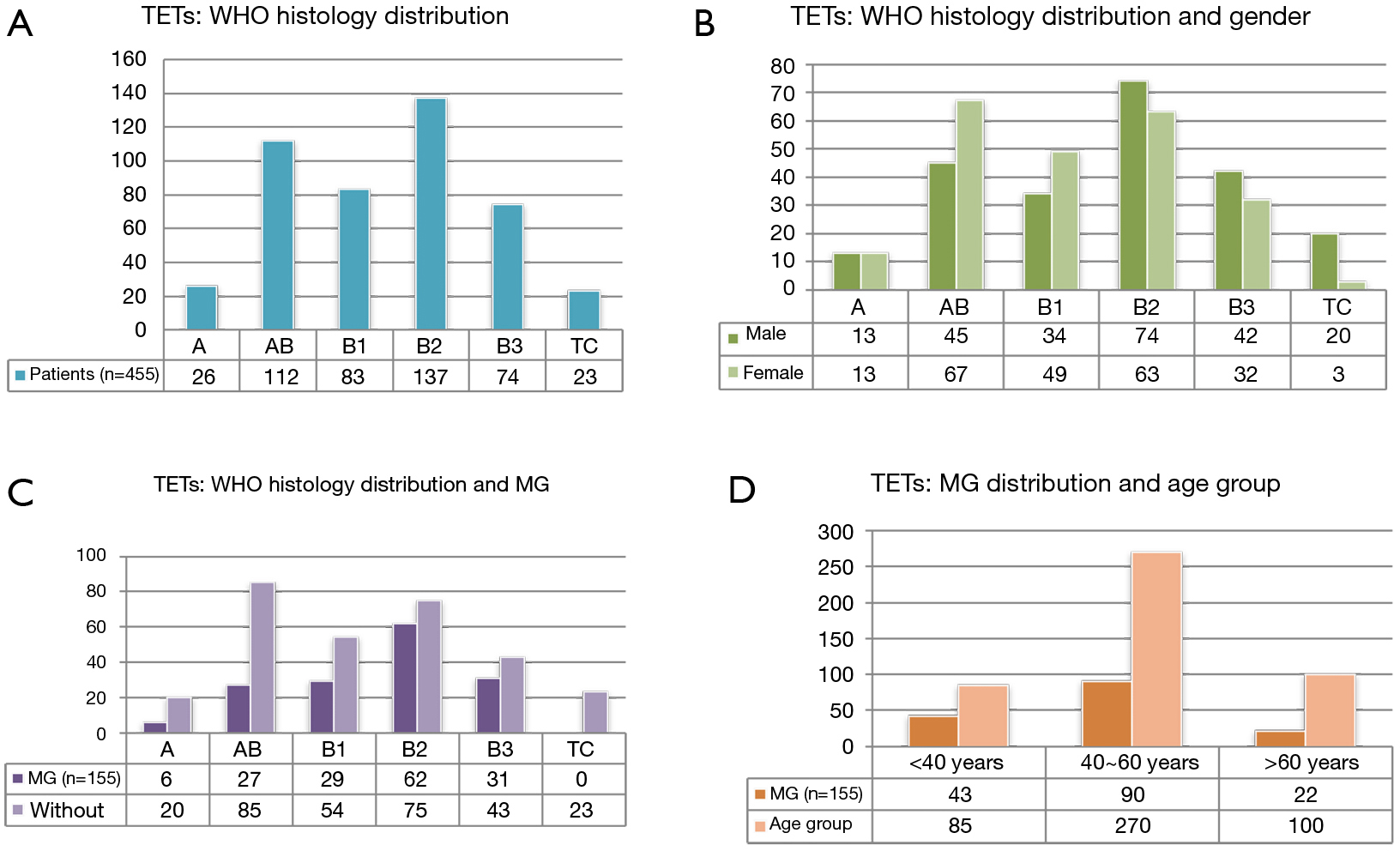 MG predominantly existed with WHO types A–B3 TETs and the maximal tumor diameters of TETs with MG (5.6±2.6 cm) were smaller than those without MG (7.5±3.6 cm, P<0.0001). We then analyzed the size difference among different subtypes of TETs using the cumulative curves of Kruskal-Wallis test and no significant difference was revealed among these subtypes (Figure 2).

Incidence: estimation of the incidence of TETs based on the hospital database

A total of 603 TETs patients during 2004–2015 were collected and the annual incidence (including sex-specific incidence) based on hospital patient population was analyzed. It should be noted that the “incidence” used in the current study is different from the one based on the general population in the epidemiological study.

The age onset of TETs fell in a normal distribution, with a high incidence in the age group of 40–60 years old. The median age at diagnosis was 49 years, with an age range of 5 to 78 years. There was no significant difference in the age distribution of TETs between male and female (P=0.4880) (Figure 4).

The geographical distribution of 603 TETs patients

The geographical distribution of 603 patients is presented in Figure 5. Most TETs patients were from Shaanxi Province (70.81%), followed by Gansu (11.94%) and Ningxia (2.49%). All of these provinces are within northwest China. TETs patients from Shanxi province were 8.29%, and those from other provinces were 5.80% of the total patients. 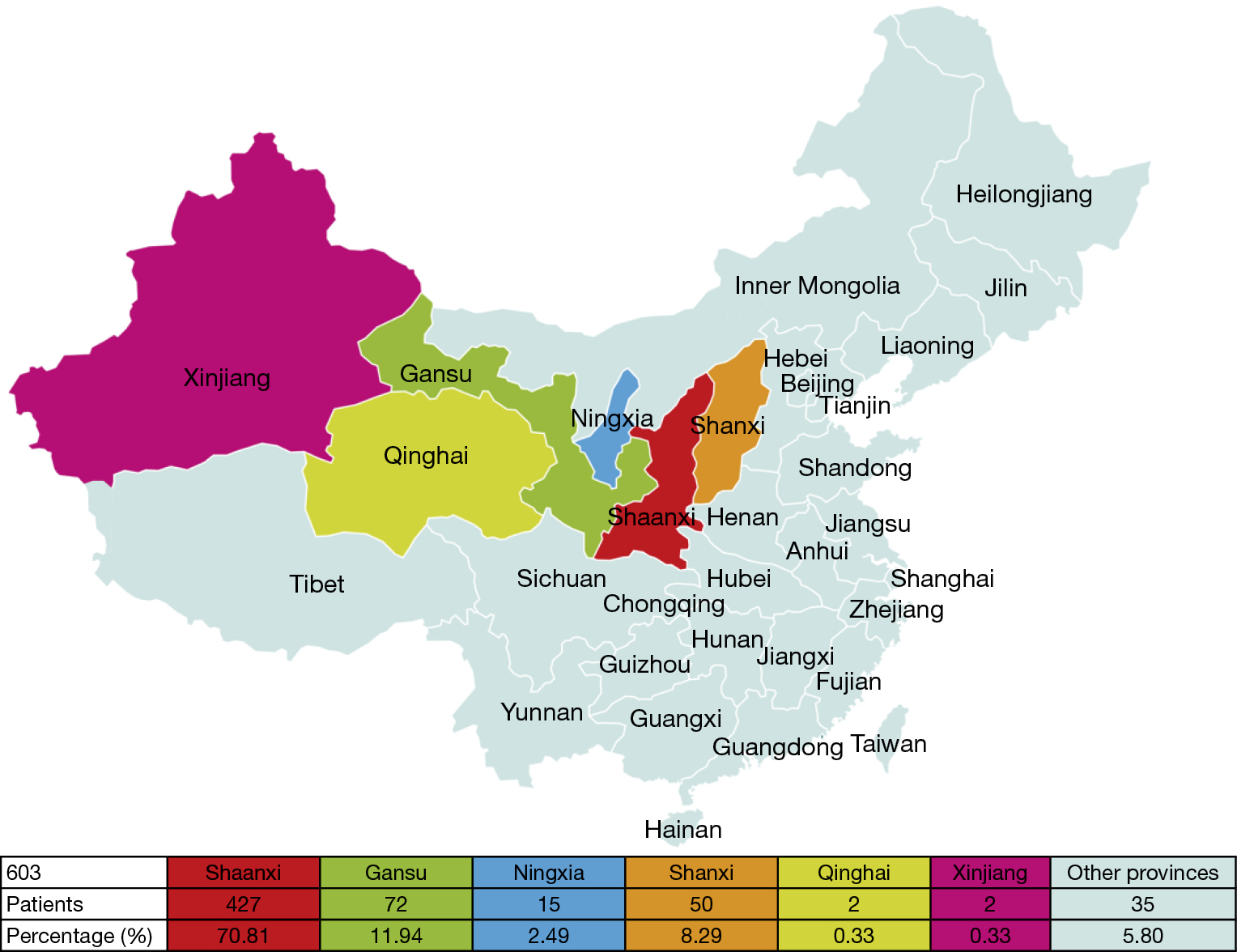 Interrelationships among clinical variables of TETs

Regression analyses were performed to evaluate the interrelationships among the clinical variables of TETs, as reported in Table 1. 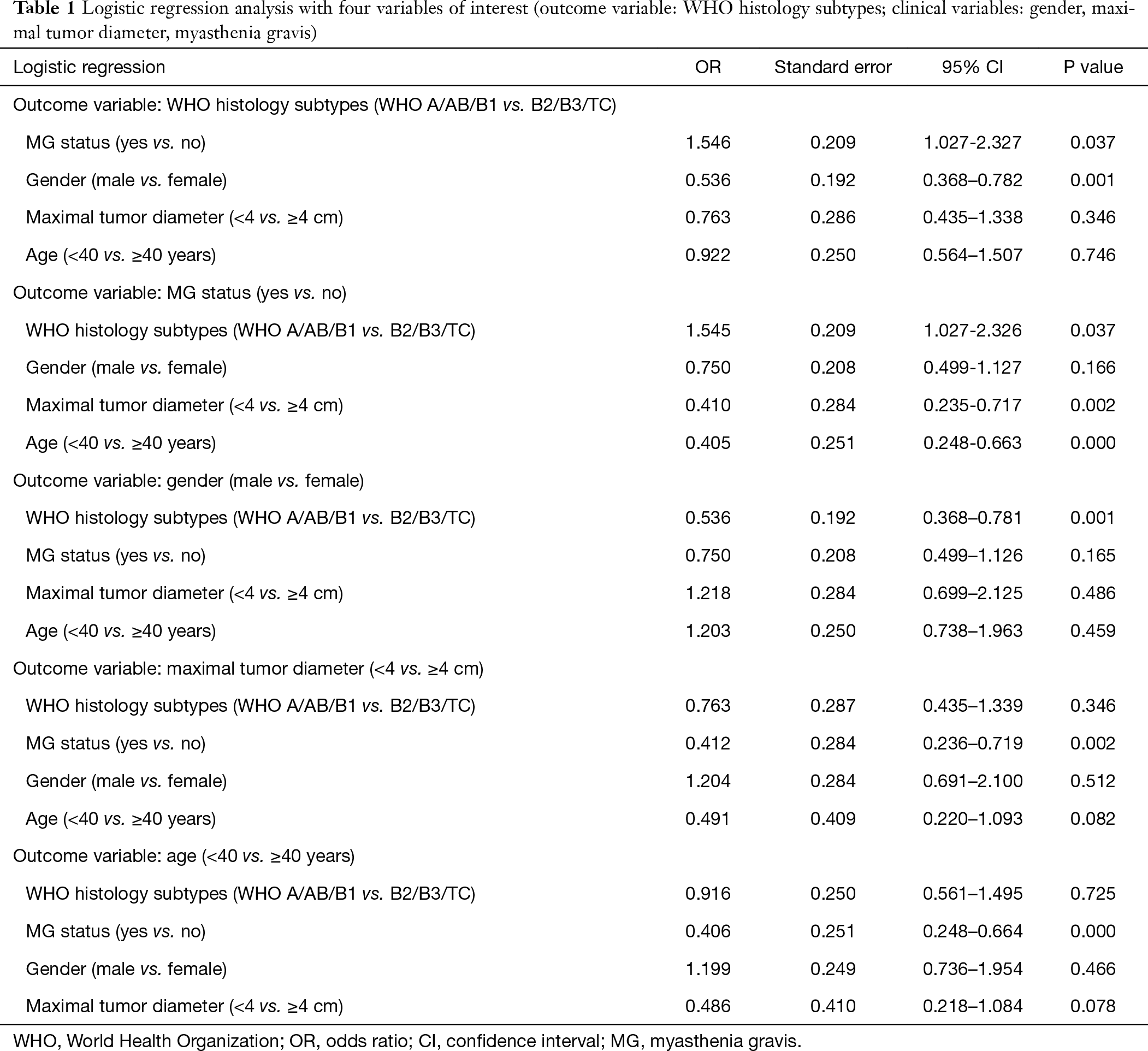 A total of 455 pathologically confirmed TETs patients with available medical imaging recordings were retrieved from 2009 to 2015. These patients received different modalities of chest imaging, including chest X-ray, CT and/or magnetic resonance imaging (MRI) before thymectomy. Among them, 182 patients underwent chest X-ray, 182 underwent non-contrast CT scan, 280 underwent contrast CT scan, and only 4 underwent MRI. A number of patients underwent more than one modality of imaging examination. The correct diagnosis rates were 42.3% (77 out of 182), 61.1% (127 out of 208), 89.3% (250 out of 280) and 75.0% (3 out of 4) for chest X-ray, non-contrast CT, contrast CT scan and MRI, respectively. Thirty-seven TETs patients were misdiagnosed as teratoma (21), lymphoma (8) and lung cancer (8) based on their images.

In the current study, we retrospectively investigated the clinical scenarios of 603 TETs patients. The overall incidence of TETs was stable and gradually increased during 2014 to 2015. The highest incidence was 1.4 cases per 100,000 in 2015. During 2011 to 2015 the female incidence was slightly higher than that in the male population. The age onset of TETs showed a normal distribution, with the peak incidence in the age of 40–60 years. There was no significant difference in the age distribution of TETs between genders. For the inter-relationship analysis of clinical variables, our study has the strength due to the large number of patients collected in a high-volume thoracic surgery institution, as well as a quite uniformed protocol for pre-, intra- and postoperative management of patients. However, the intrinsic bias due to its retrospective design should also be kept in mind. Our study indicates that MG correlates with B2/B3-type tumor, smaller tumor size (<4 cm) and younger age (<40 years). The contrast CT was with the highest diagnostic efficacy for TETs.

The 2004 WHO classification is the most widely used system for the histological classification of TETs. It provides important diagnostic and therapeutic basis for clinical, pathological and immunological research (21). According to an American study, thymoma incidence is higher in Asians/Pacific Islanders and blacks than in whites, suggesting that race, geographic or weather may affect the occurrence of TETs (22). In the current study, we could not reveal the real the incidence of TETs because only the hospital-based database was used, but we did offer some information of TETs in northwest China. Our study suggested that the highest proportion of TETs in northwest China was subtype B2, which is in accordance with the previous studies (23,24). Inconsistent with previous studies (3,7-9), we revealed significant gender differences in TETs especially AB/B1 subtypes in northwest China, which may be explained by the different ethnic difference, geography or weather.

According to the general understanding, the larger the tumor, the more malignant it is. It seems true that TCs are always observed with a maximal diameter of larger than 8 cm (20). However, we revealed no tumor size difference among the varied TETs types, suggesting that tumor size may not serve as a reliable biomarker for malignancy. We did observe that TETs without MG were larger than those with MG. This fact may not reflect the influence of MG on TETs, but rather that TETs patients with MG symptoms are more likely looking for early diagnosis and treatment. Therefore, thoracic CT scan was required for all MG patients in the clinic to screen for the simultaneous thymic lesions.

Most thymomas indicate a thymopoietic activity, with MG being the most common comorbidity. According to previous studies, approximately 30–50% of thymomas are with MG, otherwise, 15% of patients presenting with MG are identified as having thymoma (25,26). In the current study, the morbidity of MG in TET patients was 31.84% (192/603), especially among B2/3-types TETs, but not TCs. Furthermore, our results indicated that MG correlates with smaller tumor (<4 cm) and younger age (<40 years). These findings are consistent with the previous ones (27,28). However, a small portion (1%) of TCs were also associated with MG in a previous Japanese study (29) and TC was shown to be accompanied with MG based on another case study (30).

In summary, we reported that in northwest China, TETs favor female gender and 40–60 years old population and the most common TETs fall into the WHO B2 type. In addition, MG exists in over 30% TETs, and correlates with B2/3-type tumor, smaller tumor (<4 cm) and younger age (<40 years). The contrast CT was observed with the highest diagnostic efficacy for TETs.

Funding: This study received financial support from the National Key Research and Development Program of China (No. 2016YFC0107105 to Dr. GB Cui), the Science and Technology Development of Shaanxi Province (No. 2016SF-211 to Dr. GB Cui, No. 2015kw-039 to Dr. W Wang), and the Scientific Project of the Health and Family Planning Committee of Shanxi Province (No. 2016D010 to Dr. XB Lei).

Ethical Statement: This retrospective single-center study was approved by the ethics committee of Tangdu Hospital of the Fourth Military Medical University (TDLL201608-13), and informed consent was waived.