Primary non-small cell lung cancer (NSCLC) with oligometastasis has become a serious public health problem affecting the public’s physical and mental health (1-4). In 2017, Siegel et al., Master of Public Health (MPH), and the American Cancer Society of Atlanta reported an estimated 222,500 cases of lung cancer and bronchogenic carcinoma, and the death toll was estimated at 155,870 (5). The mortality rate of lung cancer was the highest among all cancers, accounting for 16% (6) of all cancer patients. NSCLC accounts for 85% to 90% of lung cancer, and most of these patients have advanced metastasis. The treatment of metastatic NSCLC only relied on palliative chemoradiotherapy (7) in the past. Surgical resection remains the most effective treatment for patients with early NSCLC. However, approximately 40% of patients have metastasis at diagnosis, with poor prognosis, and the median survival is only 8–11 months (6). The most common metastatic sites are the brain, bone, liver and adrenal gland (8). Distant metastasis is often associated with a poor prognosis, but only approximately 7% of advanced NSCLC have a single metastasis (9). However, for partial metastatic stage IV NSCLC (oligometastatic lung cancer), a number of studies have shown that long-term survival can be achieved with active treatments including surgery or stereotactic radiotherapy. Therefore, in the middle of the 1990s, Hellman and Weichselbaum (10) proposed the concept of “oligometastasis”. Oligometastasis is an intermediate state in the process of tumor metastasis, existing in the transition period between localized primary and extensive metastasis (11); the number of metastatic tumors is less than 5, and the metastatic organ is specific. Hellman proposed the spectral theory and suggested that the state of oligometastasis reflects the inactive biological behavior of tumor cells in vivo; furthermore, ablation of all known metastases can prolong disease-free survival and even cure patients. This theory has been supported by many clinical experiences. For example, liver resection for patients with colorectal liver metastases and pneumonectomy for lung metastasis of sarcomas improved long-term survival (12). “Oligometastasis” emphasizes the localized tumor burden, which is similar to that of isolated distant metastasis, yet different. The number of metastases or distant metastasis organs can be several, not limited to isolated distant metastasis (13). The published studies are based on the number of metastatic foci in clinical data. The number of metastases is less than 5, defined as oligometastasis. NSCLC patients require metastatic foci of 1–5 (with oligometastases). For NSCLC with distant metastasis, surgery, systemic chemotherapy, local radiotherapy, targeted therapy and immunotherapy are usually required. The purpose of this study was to compare the efficacy of local surgical treatment with systematic chemoradiotherapy in treatment of NSCLC with oligometastasis.

In this study, a total of 172 patients with NSCLC with oligometastasis in our hospital from January 2006 to December 2016 were analyzed retrospectively. We compared the effects of local surgical treatment and systematic chemoradiotherapy on survival.

In our Hospital Information System (HIS) system, we searched for cases of primary NSCLC with oligometastasis from 2006 to 2016. The study was approved by the ethics committee of our hospital. Inclusion criteria included primary NSCLC diagnosed pathologically; radical resection or partial resection of primary lung cancer; 1–3 metastatic nodules outside the primary focus, and not more than 1 metastatic organ (including simultaneity and heterochrony). Both groups had an Eastern Cooperative Oncology Group performance status (ECOG PS) scores of ≤2. Simultaneous oligometastasis was defined as oligometastasis detected within 6 months of the diagnosis of primary lung cancer. All patients enrolled in this study had primary lung cancer with distant metastasis and 1–3 nodules. 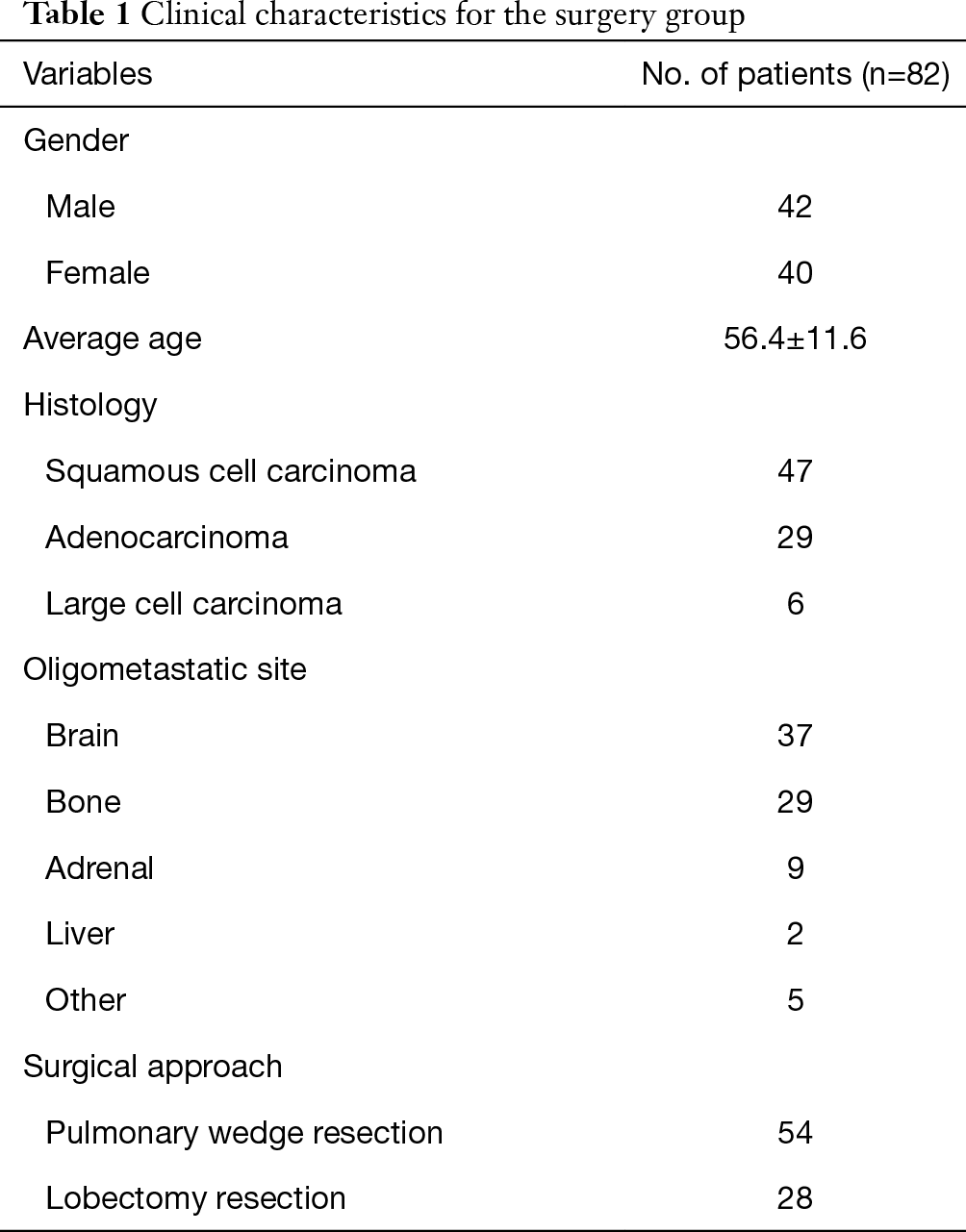 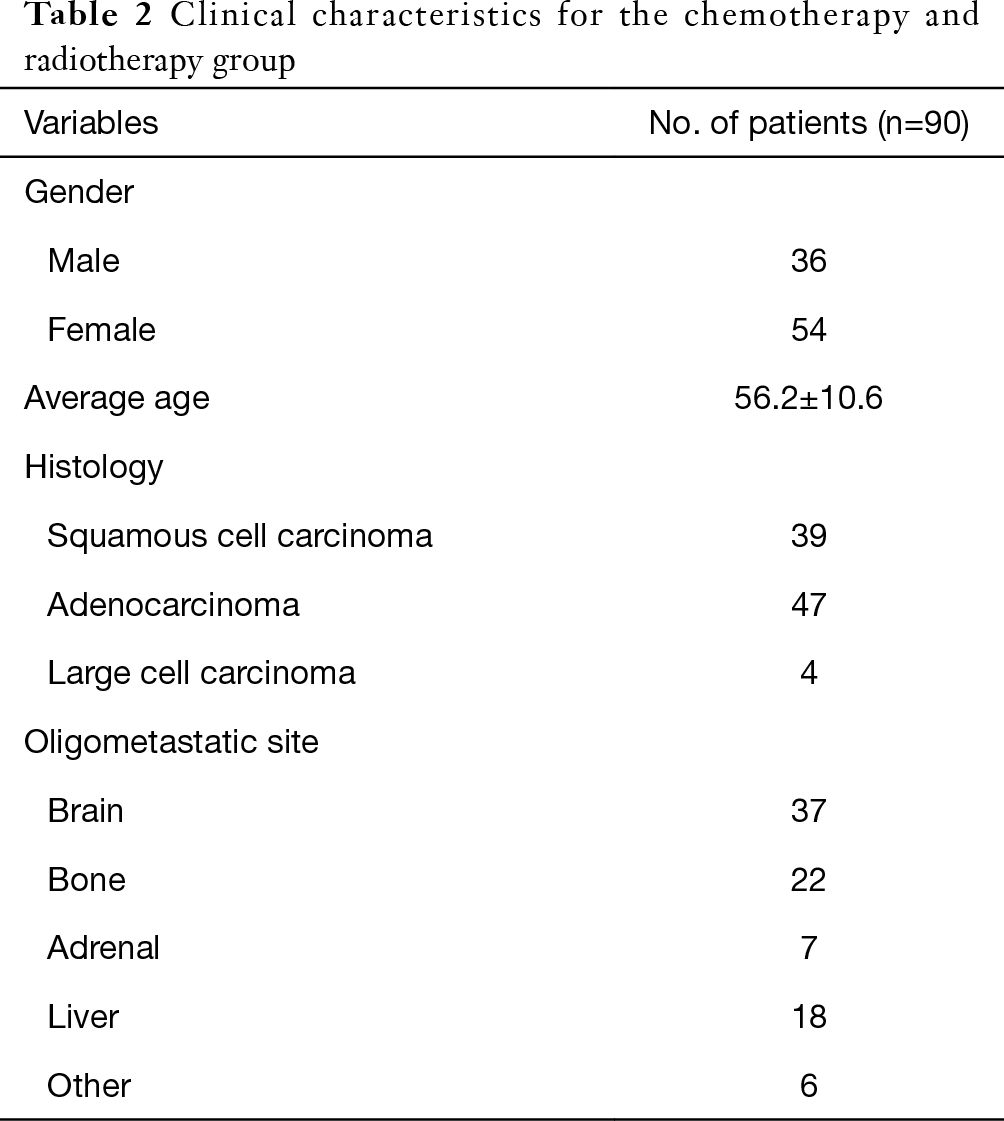 For patients with more than 1 lesion, bone metastasis occurred in multiple sites, and there were fewer than 3 bone metastases . Metastasis removal was performed for a single resectable bone metastasis, and the rest were given local radiotherapy.

The enrolled cases were divided into groups A and B. In group A, depending on the patient's lung function and body condition, the surgical method was wedge resection or lobectomy, and adjuvant chemotherapy was recommended after surgery. The patients in group B met the inclusion criteria, but they had poor physical performance and were unable to tolerate surgery, or the patients themselves and/or their family members refused the surgery. Therefore, they were treated with systemic chemotherapy combined with local radiotherapy. The patients were followed up for 12 months, including by telephone follow-up, medical records and outpatient imaging data.

For patients with peripheral tumors less than 2 cm in diameter, or with poor or poor lung function or good cancer differentiation, patients with lower malignancy were treated with a wedge resection of the primary lung. Pulmonary resection was reserved for primary tumors, and partial excision was performed at the oligometastatic site.

The two groups were followed up for 12–72 months. There were no statistically significant differences in terms of gender, age, type of pathology or surgery methods of primary tumors (P>0.05). The median survival time (MST) was 48 months and the 5-year survival rate were 21.1% in group A of 82 patients; in group B, the MST was 18 months, and the 5-year survival rate was 7.6%. The MST and 5-year survival rates in group A were significantly higher than those of group B (P=0.0002) (Figure 1). Survival rates were higher in patients with adrenal metastasis than in those with brain, bone, liver, or other metastases (P<0.001) (Figure 2). There was no significant difference in the survival rate between the pathological type of primary tumor and the surgical methods (P=0.36, P=0.77) (Figures 3,4). Our study found that after follow-up of the patient’s metastases, approximately 20% were slightly advanced, and approximately 80% were controlled. In this study, there were 12 cases with tumor size ≤2 cm, 42 cases with tumor size between 2 and 4 cm and 28 cases with tumor size above 4 cm. We further developed a Cox survival curve for tumor size. The results were not statistically significant (P >0.05). 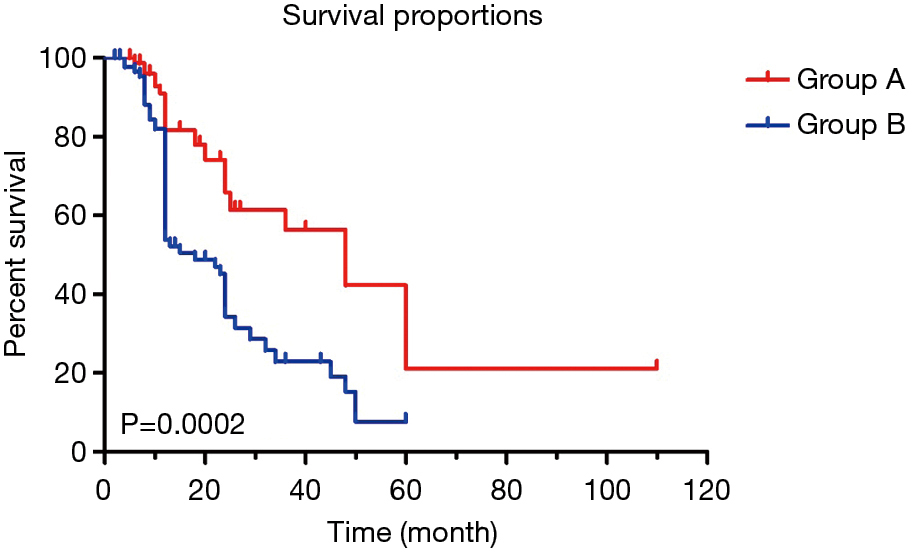 Figure 1 The Kaplan-Meier curve of overall survival time for groups A and B. 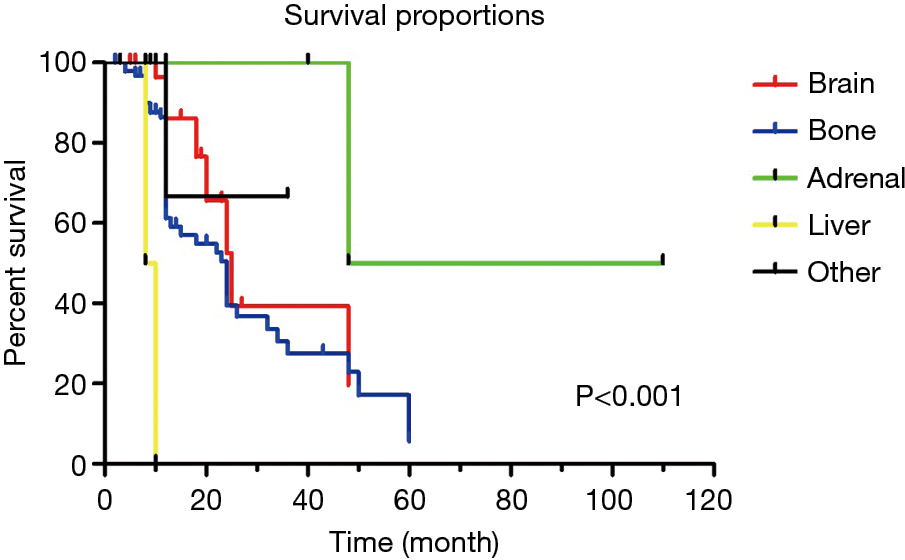 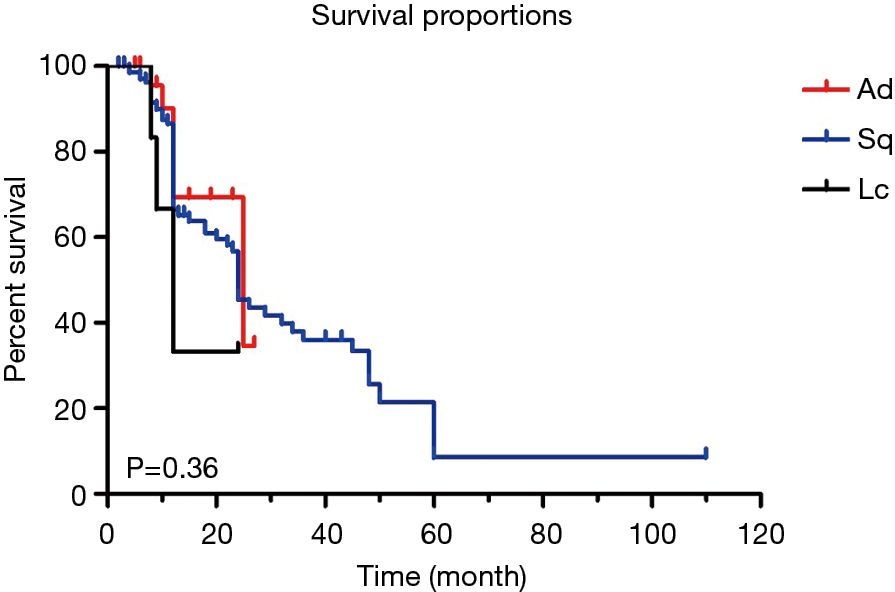 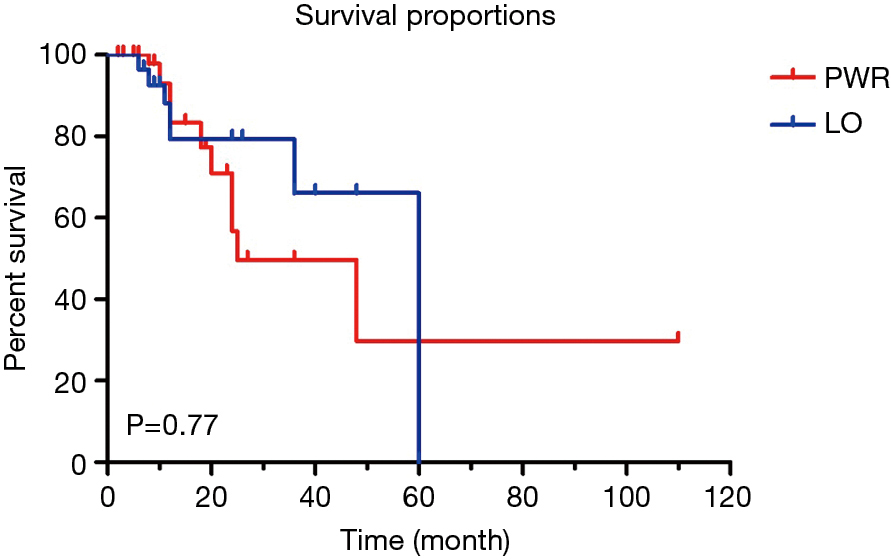 There remains controversy as to whether local treatment of NSCLC with oligometastasis is appropriate. However, most studies reported that treatment of oligometastasis was different from traditional palliative treatment for advanced lung cancer; the relatively limited metastasis therapy highlighted the clinical value of local therapy. In 2015, in order to better guide management, the International Association for the study of lung cancer (IASLC) proposed the eighth edition of NSCLC staging system. The staging guidelines pointed out that oligometastasis was classified as M1b, with prognosis similar to that of M1a, is clearly superior to that of patients with extensive metastatic M1c. Moreover, the new staging guidelines emphasized the advantages of local therapies (such as surgical resection and stereotactic radiotherapy) in the treatment of metastatic lung cancer (14).

NSCLC patients with localized lymph node metastasis were also recommended for different treatment by the eighth edition of the TNM (tumor-node-metastasis) staging system. N1 was subdivided into N1a (single station metastasis) and N1b (multistation metastasis); N2 was subdivided into N2a1 (no N1 metastasis, direct skip to N2 lymph node), N2a2 (N1 lymph node metastasis, simultaneous single station N2 lymph node metastasis) and N2b (multistation N2 lymph node metastasis) (15). Lymph node metastasis was the most important prognostic risk factor. De Leyn et al. (16) studied 66 patients with bilateral synchronous lung cancer who underwent radical resection. The overall MST was 25.4 months, and the 5-year survival rate was 38%. Although the histopathological types of the subjects were different, there was no significant difference in survival rates among the various tissue types or the same type of multiple primary cancers. Therefore, if there is no evidence of lymph node involvement or distant metastasis, surgical resection is recommended, even if the lung is oligometastatic to the side of the lung. The effect was better than that of stage IV systemic palliative chemotherapy. Endo et al. (17) reported a NSCLC patient with stage I or stage II of thoracic clinical staging who had an oligometastasis. The overall 5-year survival rate was 40% after resection. Luketich and Burt (18) compared chemotherapy alone with surgical resection after chemotherapy in NSCLC patients with isolated adrenal metastasis. The MST was 8.5 months in the 6 patients treated with chemotherapy alone, and the MST was 31 months in 8 patients treated with surgical resection after chemotherapy. There was a significant difference, and all patients treated with chemotherapy alone died within 21 months.

There remain many problems to be solved. This study found that local surgery could benefit patients with NSCLC oligometastasis and determined prognostic factors, with certain directive significance for the choice of operative indications. In 82 cases, after the local primary resection was performed, the MST was 48 months, and the survival rate at 5 years was 21.1%. The prognosis was substantially better than that of chemoradiotherapy group, and it was related to the sites of oligometastasis. Patients with adrenal metastasis had better prognoses. However, there were few cases in this study. Metastatic sites did affect overall survival, and patients with adrenal oligometastases had higher survival rates than did patients with brain, bone, liver or other oligometastases. In addition, patients had a recurrence of the lung cancer as well. Because the collected cases are medical records from over nearly 10 years, multimodal treatment, such as targeted therapy and immunotherapy, was not popular enough in the early years, therefore we did not decide on multimodal therapy for these patients. In this study, the choice of patients was considered in the selection of cases. The choice of bias was primarily gender, age, pathological stage and loss to follow-up rate. There was no significant difference in terms of gender and age between the two groups. The loss of follow-up rate was controlled within 5%. Metastatic sites id affects overall survival, and patients with adrenal oligometastases had a higher survival rate than did those with brain, bone, liver or other oligometastases. Due to the small sample size in this study, no further stratified analysis of the metastatic site was performed. In future studies, it is expected that the sample size can be further expanded, and the analysis of the metastatic sites may be done to investigate the long-term outcomes of lung cancer surgery associated with oligometastasis through comparison of metastatic sites.

Ethical Statement: The protocol of this study was approved by the Ethics Review Committee of the National Clinical Research Center for Cancer/Cancer Hospital, and the number/ID of the Ethics Approval was NCC2016 JP-01.