Myocardial ischemia-reperfusion (I/R) injury is a well-recognized pathophysiological process, which occurs in several clinical conditions such as infarction, shock, organ transplantation and cardiopulmonary bypass (CPB) surgery (1). Several pathogenetic mechanisms involved have been explored. Among them, the imbalance between sympathetic and parasympathetic system inputs to the heart, is one of the major reasons which induce myocardial ischemia, arrhythmia and death (2).

Neuropeptide Y (NPY) is a 36-residue peptide amide, co-stored and co-released with noradrenaline in sympathetic nerve fibers of postganglionic neurons innervating the cardiovascular system. NPY is associated with hypertension (3), myocardial infarction (4), cardiomyopathy (5), suggesting that NPY functions in cardiovascular homeostasis. To date, six NPY receptors (NPYRs), namely NPYRs Y1–Y6 have been reported (6,7). NPYRs regulate the biological processes through diverse ways. NPY Y1 promoted cellular shortening and calcium transient in rat ventricular myocytes (8). Antagonists of NPY Y2 could prevent the inhibition of vagal bradycardia after sympathetic stimulation (9). The influence of vagal neurotransmission and ventricular myocyte excitability was accomplished even in the presence of β-receptor blockade, which indicated that pharmacologically targeting NPYRs might be a useful therapeutic strategy synergistically with β-receptor blockers (10). Moreover, the expression of NPY was increased in human plasma after CPB (11), implying NPY signaling controlled the pathological progression of CPB. However, the expression changes of NPY and NPYRs in human heart itself during CPB surgery remain elusive. Whether the expression of NPY and NPYRs have any correlations with clinical data needs to be investigated.

Patients were hospitalized for cardiac surgery in Anzhen Hospital, Beijing. According to preoperative Doppler echocardiography, rheumatic mitral stenosis or insufficiency were found in these patients, partly with tricuspid insufficiency. Patients with cerebrovascular accidents, diabetes mellitus, myocardial infarction and other diseases were excluded. All researches involving human participants were approved by Medical Ethics Committee. Written informed consent was obtained from the patients and data were analyzed anonymously. Patient characteristics were summarized in Table 1. All patients underwent superior vena cava catheterization in the right atrial appendage. A few specimens were taken from the right atrium during the intubation of the superior vena cava (before CPB) and the extubation of the superior vena cava (after CPB), which were routinely excised and discarded tissue. The specimens were stored in RNA stabilization reagent (Qiagen) for later analysis.

Trizol was used to extract the total RNAs from patients’ atrium. Trizol (sigma) was added in patients’ atrial tissue for lysis, then chloroform and isopropanol were used for purification, finally the supernatant of centrifugation was dissolved in water with RNase free, and stored at −80 °C. 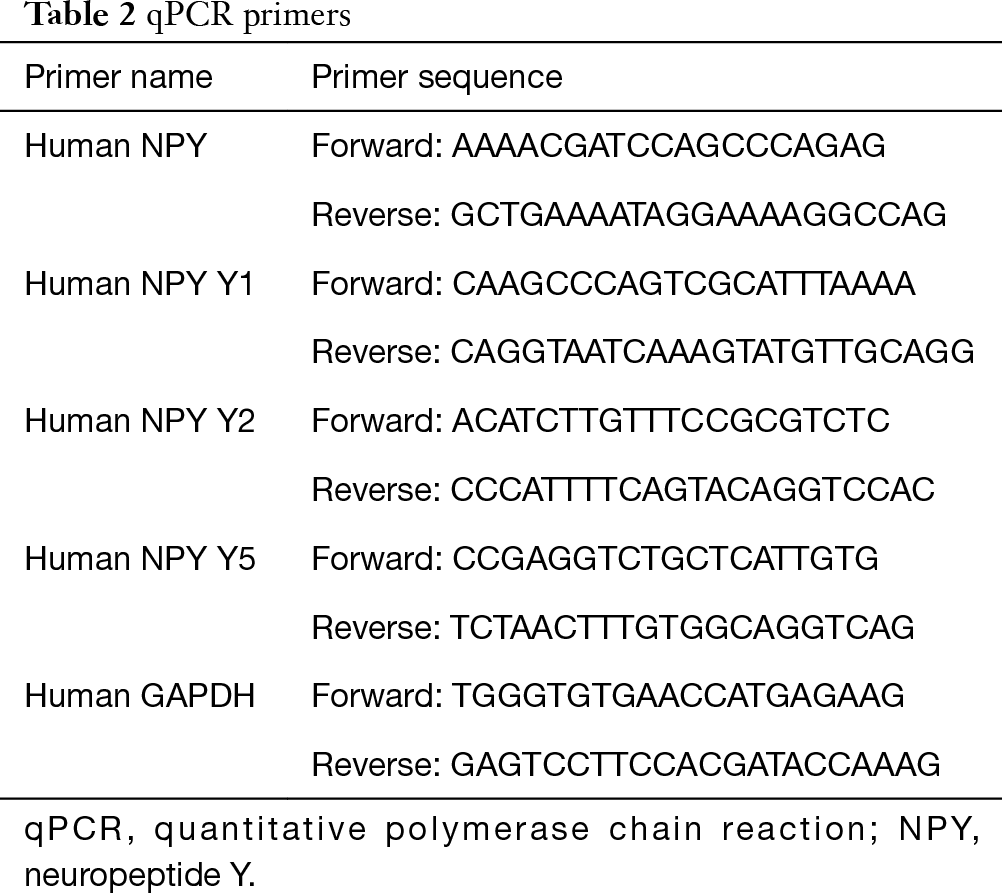 Results were presented as means ± standard error of the mean (SEM) or median (interquartile range). Data were evaluated by one-way ANOVA or nonparametric tests. A value of P<0.05 was considered statistically significant.

Twenty-two patients hospitalized for cardiac surgery due to rheumatic heart disease were randomly enrolled. These patients received cardiac valve replacement surgery by CPB. The mean age of all patients was 51.77±2.597, total CBP time was 89.45±8.522 min, ischemic time was 62.27±5.868 min, reperfusion time was 27.18±5.175 min. There was no statistically difference between male and female patients in such general information. The cardiac functions such as ejection fraction (EF), left ventricular internal diastolic diameter (LVIDd), left ventricular internal systolic diameter (LVIDs) were detected by echocardiography before and after CPB. After surgery, the patients’ cardiac functions were partly recovered, such as LVIDd returned to normal range (Table 1). 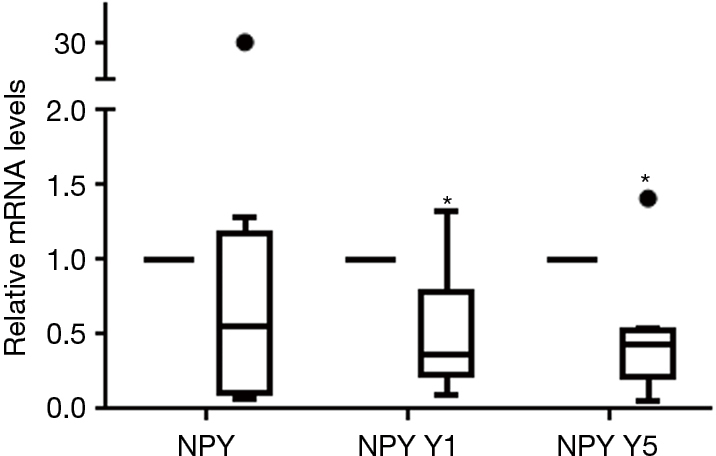 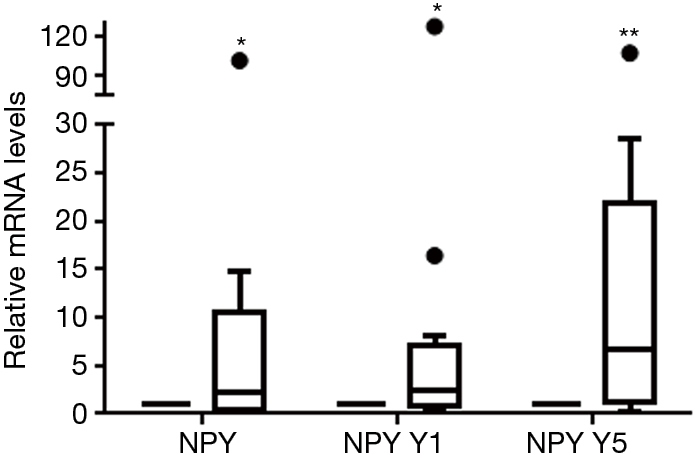 It has been proved that NPY regulates NE release in the terminal of sympathetic fibers. The NPY signaling plays comprehensive roles in all typed cardiac cells. In human right ventricular endocardial endothelial cells, NPY Y1 modulates the cytosolic and nuclear calcium homeostasis, and their secretion of NPY (12). In cardiomyocytes, NPY had been shown to stimulate hypertrophy of rat and chick cardiomyocytes through activation of NPY Y1 receptor (13,14). Pellieux et al. found that NPY via NPY Y5 receptor participated in the development of mouse cardiac hypertrophy through MAPK cascade (15). These data suggest NPY Y1 and Y5 have positive chronotropic effects on ventricular cardiomyocytes. With respect to NPY Y2 receptor, it reduces ACh release and vagal bradycardia after sympathetic stimulation (16). These data mentioned above suggest that pharmacologically targeting NPYRs might conduce to cardiovascular homeostasis.

To our knowledge, this is the first reports that the transcriptional levels of NPY and NPYRs genes were investigated in atrial samples from patients with rheumatic diseases before and after CPB surgery. Using qPCR, we found that NPY, NPY Y1, NPY Y2 and NPY Y5 were all expressed in human right atrium, which was consistent with Ejaz’s study (17). But the NPY Y2 transcriptional level was so hard to detect in our patients. Since NPY Y2 receptor was thought to be a presynaptic receptor (18), its transcriptional level was little.

In all 22 patients, there was no statistically difference between the transcriptional levels of NPY, NPY Y1 and NPY Y5 before and after CPB. In spite of the sex factor, our data revealed that NPY mRNA level was up-regulated after CPB in female patients. It had been reported that patient plasma NPY concentration was elevated after CPB since cardiac sympathetic nerve activity was increased after surgery (19). In this study the up-regulation of NPY mRNA in female patients in atrium might be attributed to the elevated NPY levels in plasma. In addition, we found that, only four people had atrial fibrillation after CPB in our 22 patients, and interestingly they were all females. Guler group demonstrated that NPY played a role in the occurrence of atrial fibrillation in the patients after coronary bypass surgery (11). Hence, the atrial fibrillation in female patients might be associated with up-regulation of NPY expression. Since the number of atrial fibrillation patients was small, this manifestation needed to be investigated further. Though there was no statistically difference between the transcriptional levels of NPY in male patients before and after CPB, we found that the relative mRNA level of NPY was negative correlated with cardiac EF after CPB in these patients. Luo et al. reported that there was a dose-dependent stimulation of NPY with decreased ATP content and activity in the rat cardiomyocytes (20). Thus, our findings reinforced that the decreased level of NPY mRNA in male atriums might help the patients to recover cardiac functions after surgery.

In this study, the transcriptional levels of NPY Y1 and NPY Y5 were both up-regulated in female patients, but down-regulated in male patients after CPB, which suggested that NPY signaling was activated in female patients. Jackson et al. found that NPY Y1 expression level was higher in the male rat skeletal muscle compared with that in females (21). In our atrium muscle tissue, the expression levels of NPY Y1 and NPY Y5 were also stronger in male patients than that of female patients. Musso et al. found that estradiol could stimulate NPY Y1 transcription through estrogen receptor alpha (ER-α) (22). However, we could not find significant difference in the mRNA levels of ER-α in female patients before and after CPB (data not shown). Since ER-α moved from cytoplasm to nucleus to regulate target genes (23), the up-regulation of NPY Y1 expression in female patients might be due to the cytoplasm-nucleus translocation. NPY and its receptors had been found gender-specificity in other disease, such as type 2 diabetes (24) and severe periodontitis (25). Since targeting NPYRs pharmacologically may be a useful therapeutic strategy synergistically with β-blockers for cardiovascular diseases, the gender-specificity should be taken into account.

Our results suggested that there was gender-specify in the expression of NPY and NPY receptor genes during CPB surgery and NPY signaling was activated in female patients. Gender differences should be considered when using NPYRs as pharmacologically targets for the treatment of cardiovascular diseases.

Ethical Statement: The study was approved by the ethics review board of the Capital Medical University affiliated Beijing Anzhen Hospital (No. 2009001X) and written informed consent was obtained from all patients.