Chronic lung disease is one of the leading causes of morbidity and mortality worldwide and frequently results in exercise intolerance and peripheral muscle dysfunction that have been recognized as extrapulmonary involvement (1-3). Reduced exercise capacity and quadriceps weakness have adverse impacts on lung function and mortality (2-4). Pulmonary rehabilitation, including aerobic exercise and resistance training, can improve muscle function and the related clinical consequences (5,6). However, some adult patients with advanced progressive disease are unwilling or unable to perform whole-body exercise because of the high symptom burden or breathlessness, even at low levels of exertion.

Neuromuscular electrical stimulation (NMES) has been introduced as an alternative treatment to enhance lower limb muscle strength in healthy subjects (7) and is well tolerated by patients as a means of improving exercise capacity (8,9) and muscle function (10). However, these studies lack power and precision because of their small sample sizes, varying outcome measures, and inconclusive results (11,12). This meta-analysis aimed to assess the effect of NMES on exercise capacity, quadriceps strength and other clinical outcomes in adult patients with chronic lung disease.

This systematic review was conducted in accordance with the guidelines in the handbook of the Centre for Reviews and Dissemination. A computerized literature search was performed in the following databases up to January 2018: Medline/PubMed, EMBASE and the Cochrane Library. The following keywords were used: NMES and lung. The broad inclusion criteria for eligible articles were as follows: (I) population: patients with chronic lung disease; (II) intervention: NMES of the lower limbs, alone or in combination with other exercise programs; (III) comparison: NMES vs. any treatment including sham exercise programs or no treatment; and (IV) study design: randomized clinical trials. Articles in a language other than English, reviews, notes, editorials, qualitative studies, and congress abstracts were excluded.

Two independent reviewers (Gong and Shen) separately extracted the data according to the inclusion criteria. Any disagreements between the reviewers were usually resolved by consensus. Discrepancies were resolved by a third independent reviewer (Jiang). Analytical data missing from the primary reports were requested from the authors. When the same population was reported in several publications, we only included the most informative article or the most complete study to avoid the duplication of information.

The quality of the included studies was assessed using the Jadad scale (13). A score ≤2 indicated low quality, and a score ≥3 indicated high quality (14). This study was conducted in accordance with the Preferred Reporting Items for Systematic Reviews and Meta-Analyses (PRISMA) statement (15).

Revman5.1.0 (http://imscochrane.org/revman) was used to perform the meta-analysis. Differences were calculated as weighted mean differences (WMDs) or standardized mean differences (SMDs) with 95% confidence intervals (CI) for continuous outcomes. All measures were pooled across studies using a random effects model. Heterogeneity across studies was tested using the I2 statistic. Studies with I2 statistics of 25–50% were considered to have low heterogeneity, those with I2 statistics of 50–75% were considered to have moderate heterogeneity, and those with I2 statistics >75% were considered to have a high degree of heterogeneity (16). If I2 was >50%, a random effects model was used due to the higher degree of heterogeneity. Potential sources of heterogeneity were identified by sensitivity analyses conducted by omitting each study in turn and investigating the influence of each study on the overall pooled estimate. A subgroup analysis was also conducted based on different measurement indicators. Publication bias was not assessed because of the limited number (<10) of studies included in each analysis. P<0.05 was considered significant.

The initial search yielded 646 relevant articles. In total, 605 studies were excluded based on the titles and abstracts for various reasons (reviews, nonrandomized studies, or not relevant to our analysis). In total, 41 studies were identified for full-text analysis. Following further analysis of the selected studies’ adherence to the inclusion criteria, 11 RCTs were selected for this meta-analysis, and 30 studies were excluded from the final analyses. Figure 1 shows the different phases of the search process. 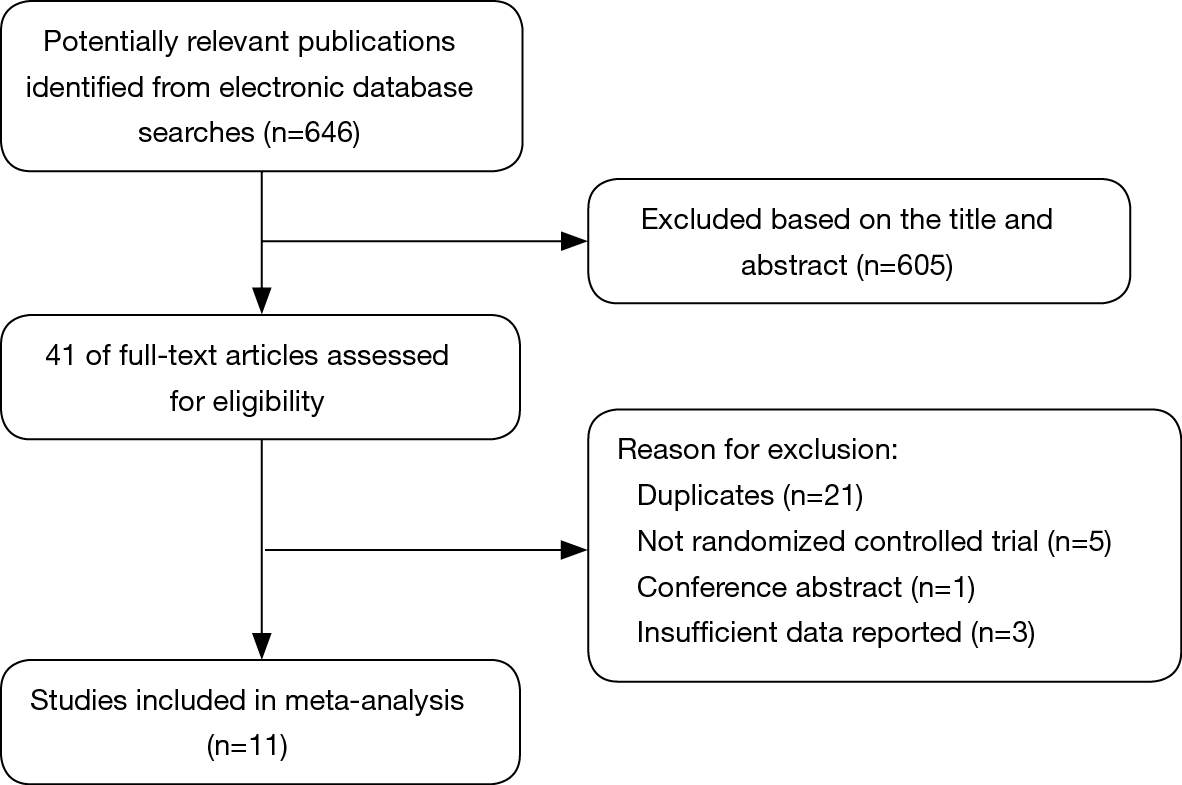 Figure 1 Search strategy and flow of participants in the meta-analysis. 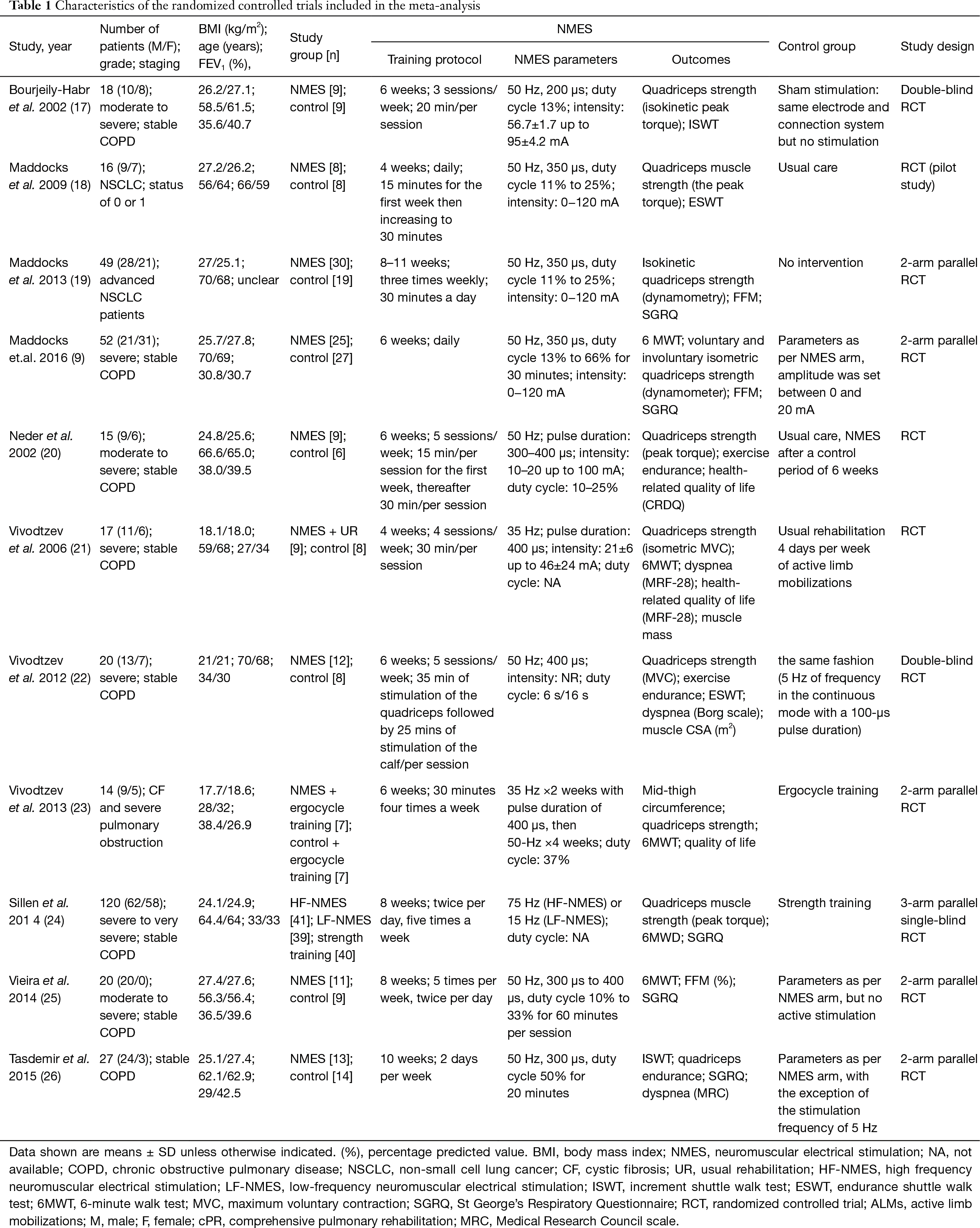 Two investigators (Gong and Shen) agreed on every item of the Jadad score. The mean Jadad score was 3.6 (standard deviation =0.65). The risk of bias analysis showed that only three RCTs adequately reported the randomization protocol used (9,24,26), while five RCTs (9,20,24-26) described the method used to conceal the allocation of patients to treatments (Figure 2). 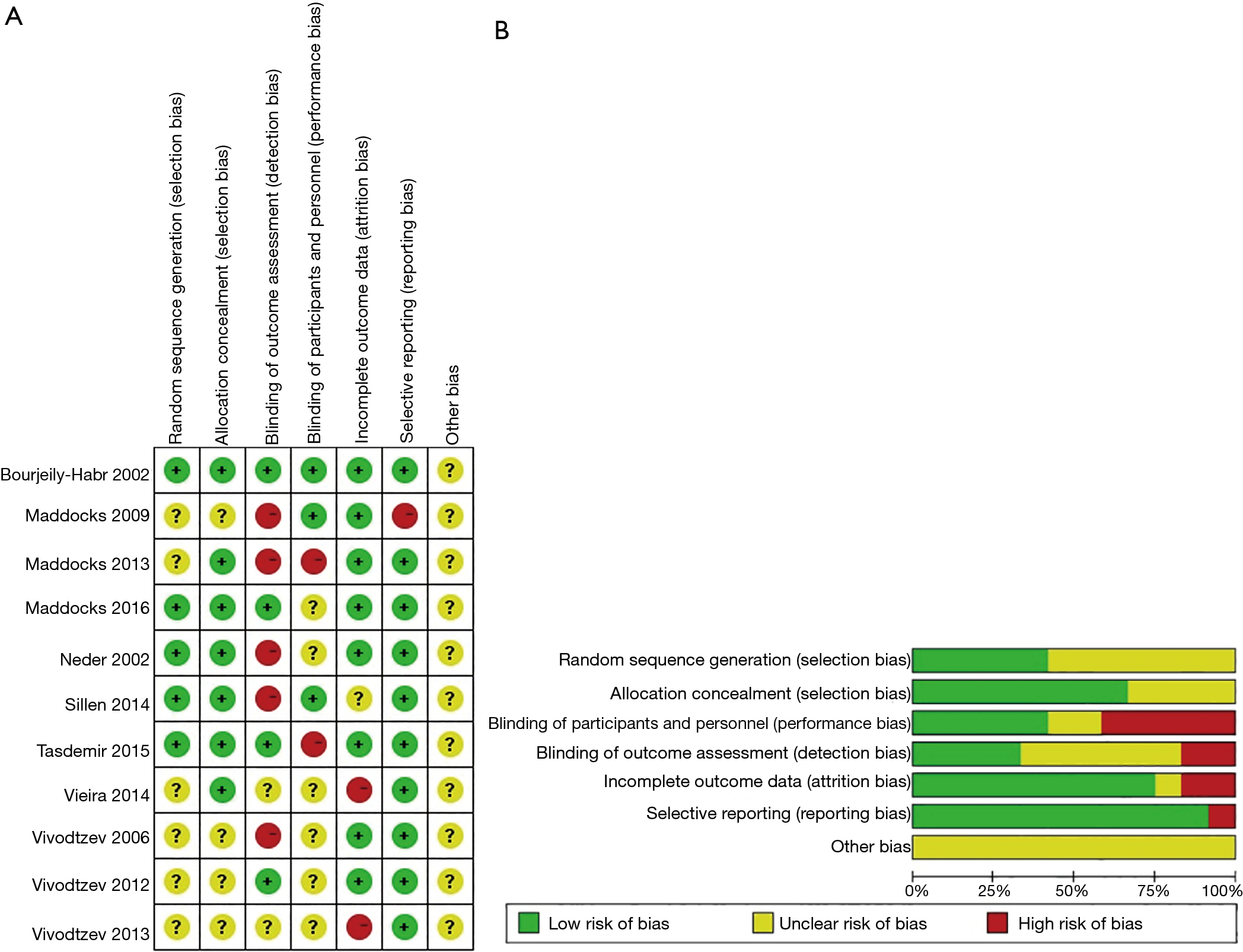 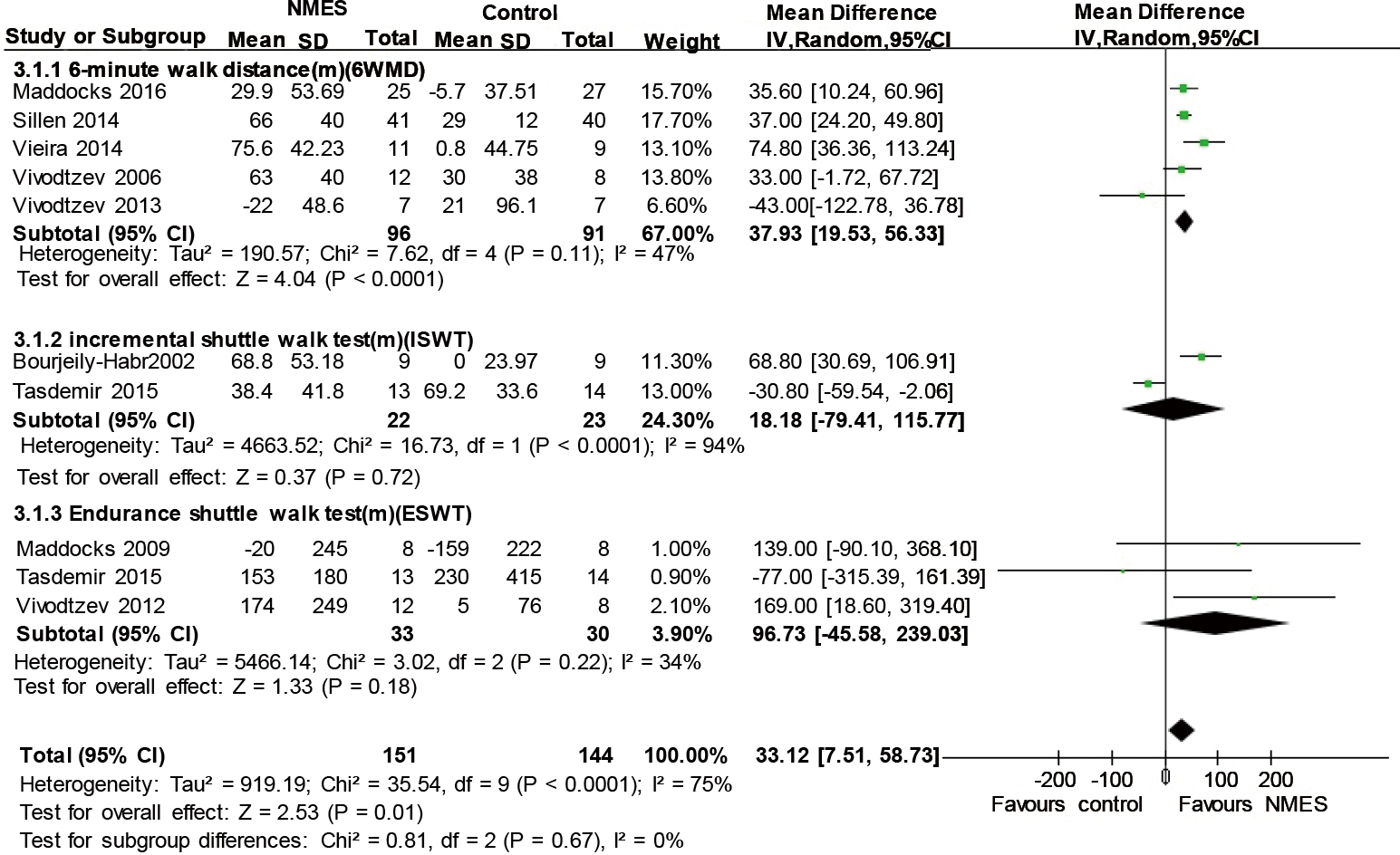 Figure 3 A forest plot of the meta-analysis of RCT comparing NMES with the control group for the change in exercise performance as analyzed by the random effects model. Each block represents a study, and the area of each block is proportional to the precision of the mean treatment effect in that study. The horizontal line represents the 95% confidence interval (CI) for the treatment effect. The center of the diamond is the average treatment effect across studies, and the width of the diamond denotes its 95% CI. RCT, randomized controlled trial; NMES, neuromuscular electrical stimulation; 6MWD, 6-min walking distance; ISWT, increment shuttle walk test; ESWT, endurance shuttle walk test.

Eight RCTs (9,17-21,23,24) reported quadriceps muscle strength, and these data were pooled in the current meta-analysis. Considerable heterogeneity existed among the included studies (I2=58%), and we used a random effects model for the pooled analysis. The aggregate results suggested that NMES was associated with a significant improvement in quadriceps strength (SMD: 1.14; 95% CI: 0.86–1.43; P<0.00001) (Figure 4). Removing the study by Sillen et al. [2014] (24), in which NMES was compared to resistance training, significantly decreased the heterogeneity (I2=6%) and the point estimate for effectiveness (SMD: 0.85, 95% CI: 0.51–1.19).

Figure 6 A forest plot of meta-analysis of RCTs comparing NMES with the control group for the change in the quality of life as analyzed by the random effects model. RCT, randomized controlled trial; NMES, neuromuscular electrical stimulation.

This current systematic review compiled evidence from a large number of RCTs and assessed the effectiveness of NMES in adult patients with chronic lung disease. Our principal finding is that NMES significantly improves exercise capacity and quadriceps muscle strength, which suggests that NMES has positive effects in adult patients with chronic lung disease. More high-quality RCTs, with low risk of bias and adequate sample sizes, are required to confirm its effects.

Although heterogeneity existed among the pooled studies, we can draw some conclusions from this systematic review. Our results showed that NMES improved exercise performance (6MWD: WMD 37.93 m; 95% CI: 19.53–56.33 m) and quadriceps muscle strength (SMD: 1.14; 95% CI: 0.86–1.43) compared with the control group. Inconsistent with this improvement in muscle strength following NMES, this updated review indicated that no significant differences were found between NMES and the control group in terms of muscle mass, CSA, dyspnea and SGRQ. Breathlessness and SGRQ consistently improve with pulmonary rehabilitation (27,28). The discordance between the overall improvement in muscle and exercise capacity after NMES and the lack of improvement in patient-reported outcomes including breathlessness and SGRQ may be explained as follows: first, patient-reported outcomes are influenced by many other factors (29); second, extended follow-up might demonstrate a beneficial effect of NMES on breathlessness and SGRQ (28); and third, because of the limited number of high-quality RCTs, further investigation is needed to demonstrate the true effect of NMES.

When interpreting clinical measures, it is necessary to compare the results with minimal clinically important differences (MCID). The change in 6MWD was higher than the latest MCID (≥26 m) (30). Unfortunately, the clinical relevance of this change in quadriceps strength and other clinical outcomes is unclear (31).

Our findings corroborate the results of three previous systematic reviews about the use of NMES in COPD or chronic heart failure patients. Vivodtzev 2008 (32) examined five RCTs conducted with people with COPD, and Sillen 2009 (33) included a total of 14 studies (9 with patients with chronic heart failure; 5 with patients with COPD) and revealed that NMES improved skeletal muscle function and exercise capacity, which was in accordance with our results. Compared with the other recent review (34), the major strengths of our meta-analysis are as follows: first, a larger number of pooled studies and participants were included, and the target population was not the same. Second, more outcome endpoints (dyspnea, muscle mass and CSA) were reported. Third, we used exercise performance as the primary outcome. However, Pan 2014 (12) concluded that evidence to support the positive effect of NMES on the quadriceps strength in patients with COPD was not adequate. The meta-analysis by Pan included only two studies and four studies evaluating the effects of NMES on exercise capacity and skeletal muscle function, respectively, which may be a possible cause of these inconsistent results.

Several limitations of our meta-analysis should be mentioned. First, some studies did not report the main endpoint, and more high-quality studies are needed to improve the reliability of the results. Second, the pooled estimate effects for quadriceps muscle strength have significant heterogeneity because some clinical differences among the participants existed and the intervention protocols were not the same. Third, regarding patient selection, only three articles that did not evaluate COPD (one investigating patients with CF and two investigating patients with lung cancer) were included in the meta-analysis, which, to a certain extent, may compromise the external validity. Fourth, the exercise protocols were not all the same, and the assessment of dyspnea should be considered with great care. Finally, the language of the pooled studies was limited to English, and missing data may be a possible source of publication bias.

In summary, the current meta-analysis showed that NMES was beneficial for the management of patients with chronic lung disease because it improves physical activity and lower limb muscle function. More multicenter RCTs with large sample sizes and longer follow-up periods are encouraged to further confirm this conclusion and to investigate the impact of NMES on patients with chronic respiratory disease.