Up-to-date data on the epidemiology of Stanford type A aortic dissection are scarce. The Oxford Vascular Study estimated the incidence of aortic dissection at six per 100,000 persons per year. Aortic dissection requires emergency diagnosis and treatment (1). The reported mortality rate with surgical treatment is as high as 10% and the complication rate is 30% (2). Coagulation function in the perioperative period is a key factor affecting surgical outcomes (3). There are many methods to evaluate the coagulation mechanism, all of which have limitations.

Renal dysfunction is a common complication of aortic dissection after surgery, in addition to part of patients spontaneously, most patients with renal insufficiency requiring dialysis treatment, postoperative dialysis process may lead to problems of circulation instability, infection, thrombosis, and ion disturbance can affect postoperative recovery of patients, and even cause the death of the patient. There has been a lot of research into the protection of renal function after aortic dissection, but whether the increase in D-dimer before surgery increases the risk of postoperative dialysis remains unknown.

D-dimer is a specific degradation product produced by the hydrolysis of fibrin monomers after they are cross-linked with factor XIII. D-dimer is derived from plasmin-solubilized cross-linked fibrin clots. D-dimer concentrations are primarily used to exclude pulmonary embolism and in the auxiliary diagnosis of acute aortic dissection (4). D-dimer elevation is very common in aortic dissection patients, with some patients having levels higher than 3,000 µg/L. Aortic dissection requires emergency surgery; however, the effect of elevated D-dimer on intraoperative and postoperative outcomes has not been reported. In this study, we evaluated whether elevated D-dimer increases dialysis risk after surgery in patients with Stanford A aortic dissection and its mechanisms (5).

A total of 120 patients with type A aortic dissection who underwent surgery at our institution from August 2014 through December 2015 were enrolled in the study. Acute type A aortic dissection was treated with Sun’s operation (ascending aorta replacement or Bentall + aortic arch replacement + descending aorta stenting). The average patient age was 48.08±10.73 years. Patients were divided into two groups according to their D-dimer levels. Group A had D-dimer concentrations below 3,000 µg/L; group B had D-dimer concentrations above 3,000 µg/L. The characteristics of each group at anesthetic induction are shown in Table 1. 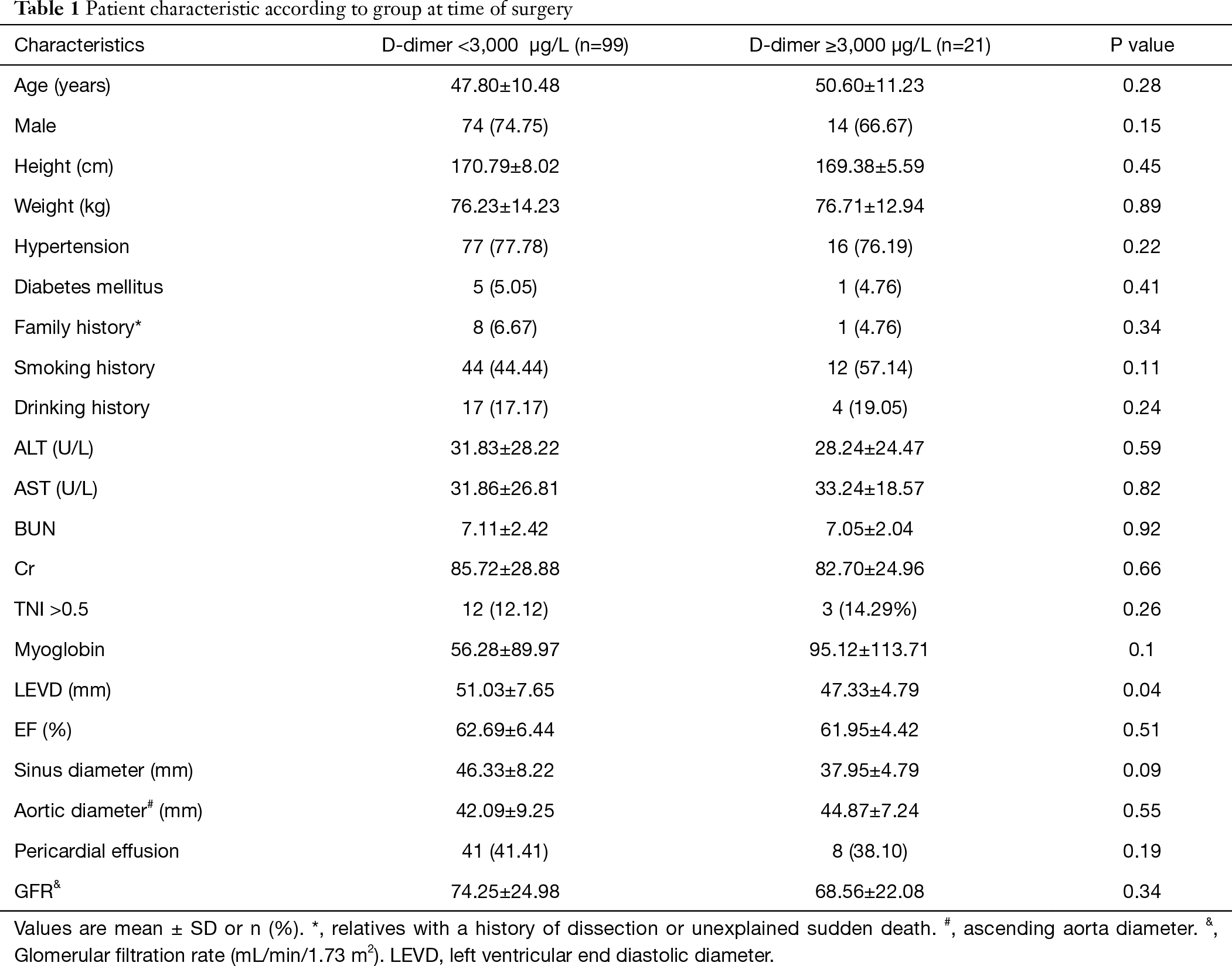 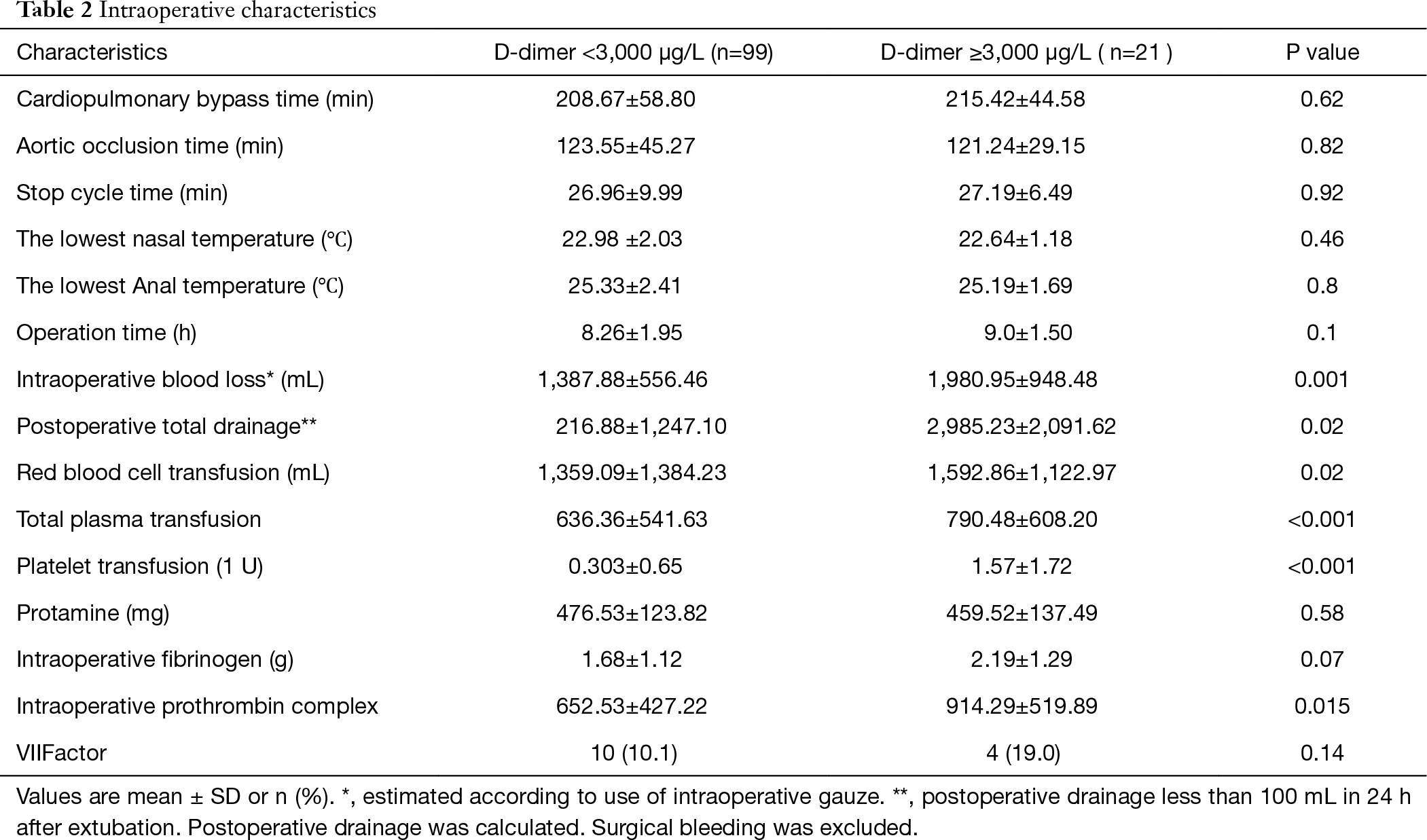 To examine the effect of aortic dissection and surgery on D-dimer concentration, blood samples were obtained from all patients at three different time points: at induction of anesthesia, 4 hours postoperatively, and 24 hours postoperatively. The first 5 mL of blood drawn were discarded to eliminate the dilution effect of saline solution. Blood samples were stored in citrated blood collection tubes. Blood was obtained from the central venous catheter or a peripheral vein and anticoagulated with sodium citrate for measurement of coagulation and fibrinolysis. Blood samples were centrifuged for 15 min at 3,500 rpm at 4 °C and frozen at −80 °C until assayed.

International normalized ratio, fibrin degradation products, hemoglobin level, platelet counts, and fibrinogen concentration were assayed on an automated blood coagulation analyzer. Specific assays were performed to assess the activation of coagulation, anticoagulation, and fibrinolysis. Plasma was assayed with the monoclonal antibody sandwich ELISA technique. All ELISA assays were performed twice and the mean value was used for analysis.

The data are presented as the mean and standard deviation. SPSS version 19 was used for statistical analysis. GraphPad Prism 5.0 (La Jolla, CA) was used for the graph production. The t test was used to compare data between the two groups, and the data were analyzed with ANOVA. P<0.05 was considered statistically significant. The Prognostic value of D-dimer was evaluated using respective Receiver Operating Characteristic (ROC) curves. Stepwise binary logistic regression analysis was used to analyze the independent factors affecting the risk of dialysis after surgery in patients with Stanford A aortic dissection.

However, there were significant differences between the groups in intraoperative blood loss (P=0.001), total postoperative drainage volume (P=0.02), and hemostatic drugs administered such as intraoperative prothrombin complex (P=0.015), with group B having significantly higher than group A. Intraoperative RBC (P=0.02), plasma (P<0.001) and platelet transfusion (P<0.001) in group B were significantly higher than those in group A. There were no significant differences between the groups in protamine (P=0.58) or fibrinogen (P=0.07), prothrombin complex (P=0.015), VIIFactor (P=0.14) administration, because these are routinely given to regulate clotting.

Blood samples were collected at induction of anesthesia, 4 hours postoperatively, and 24 hours postoperatively. The D-dimer (P<0.001), FIB (P=0.008) and FDP (P<0.001) in the B group were significantly higher than those in the A group, but there was no significant difference between the 4 hours after the operation and the 24 hours after the operation (Table 3). 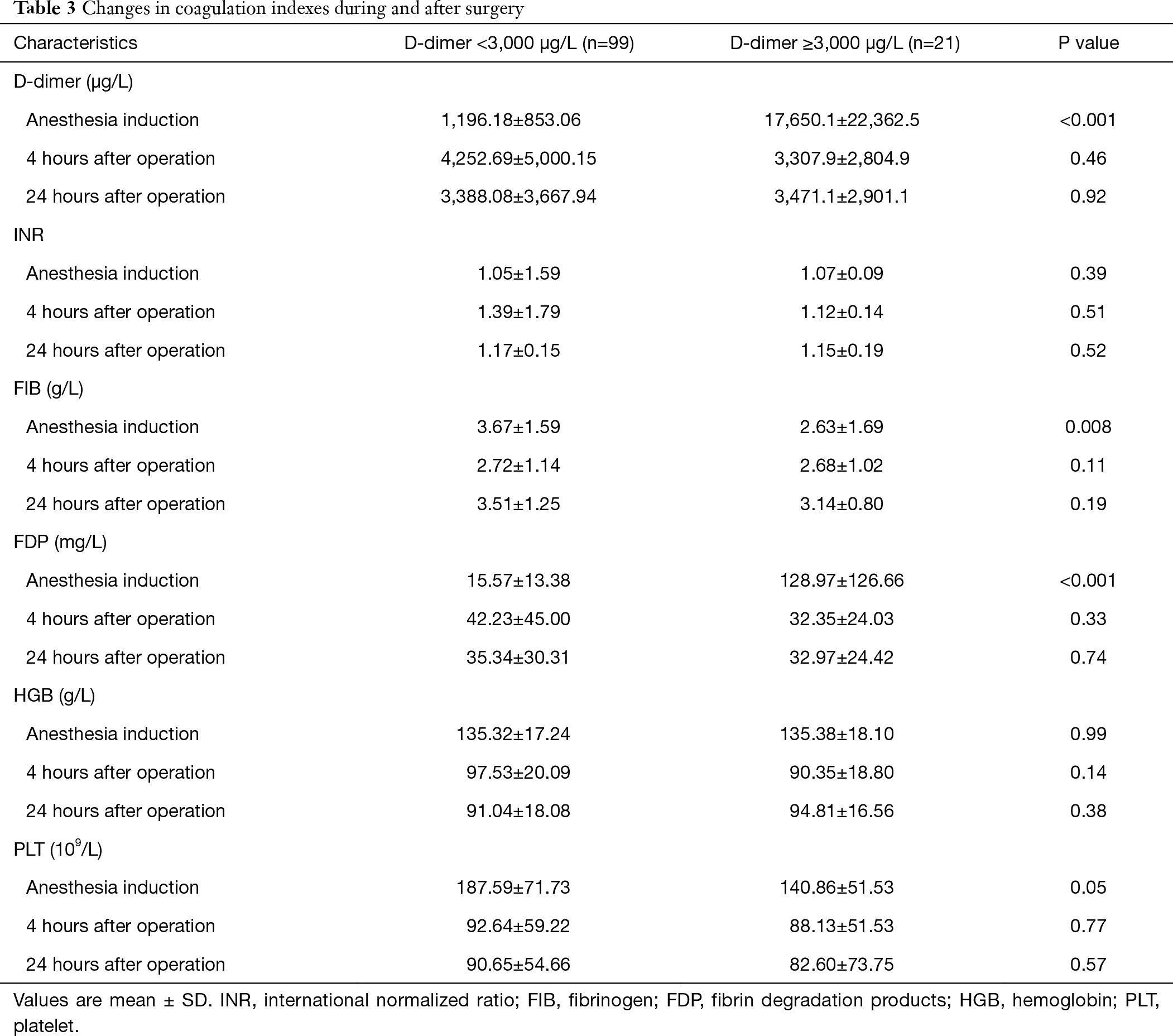 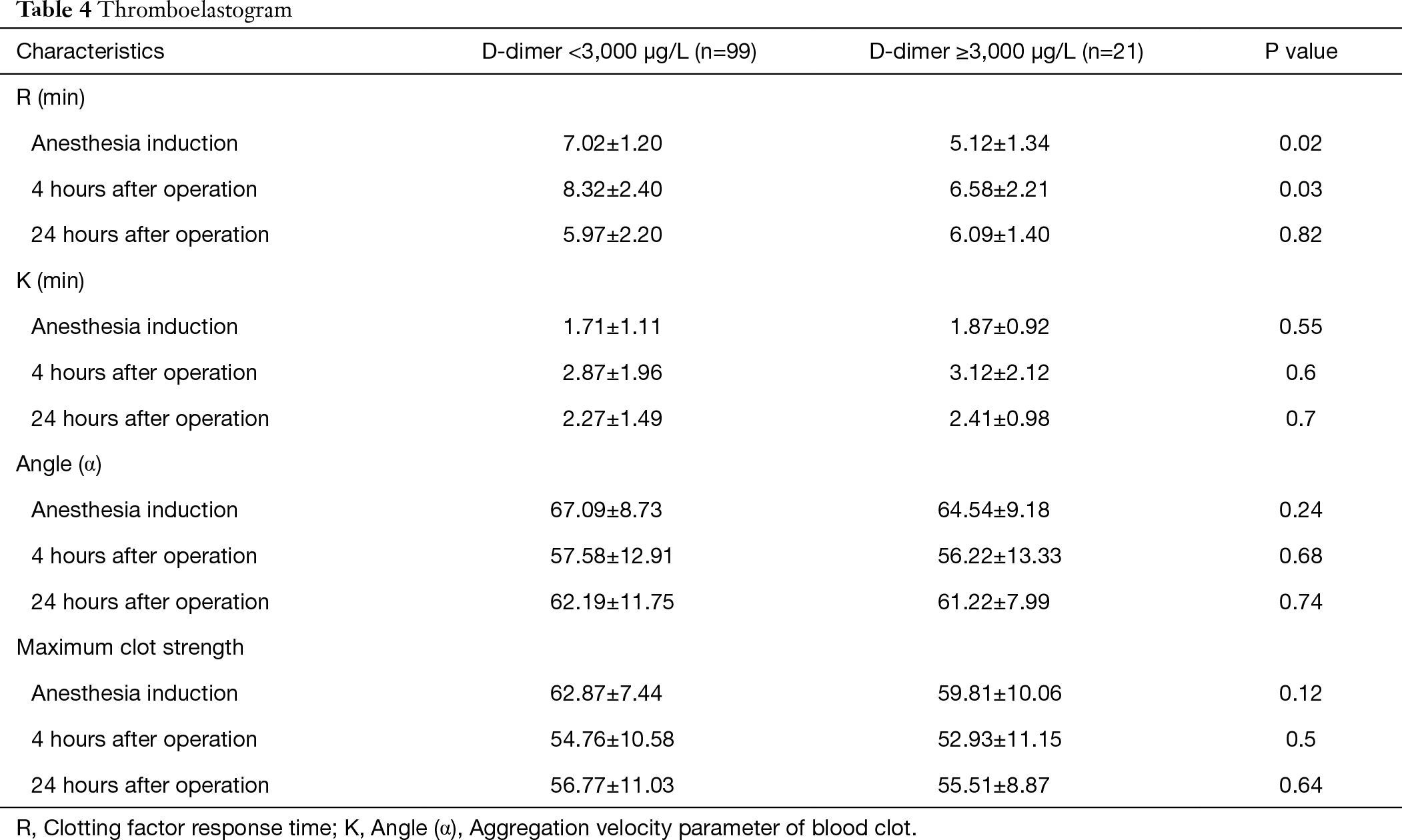 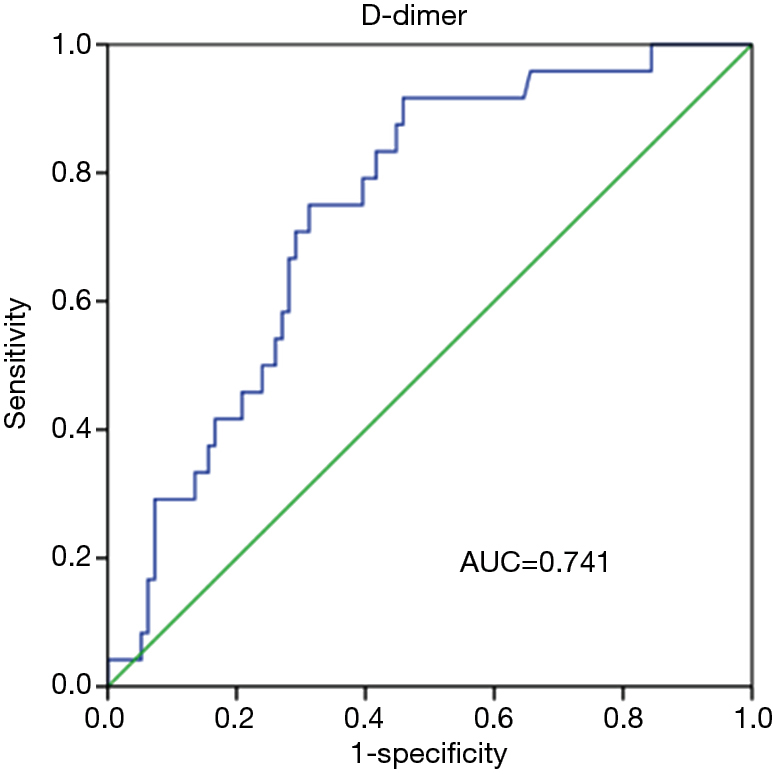 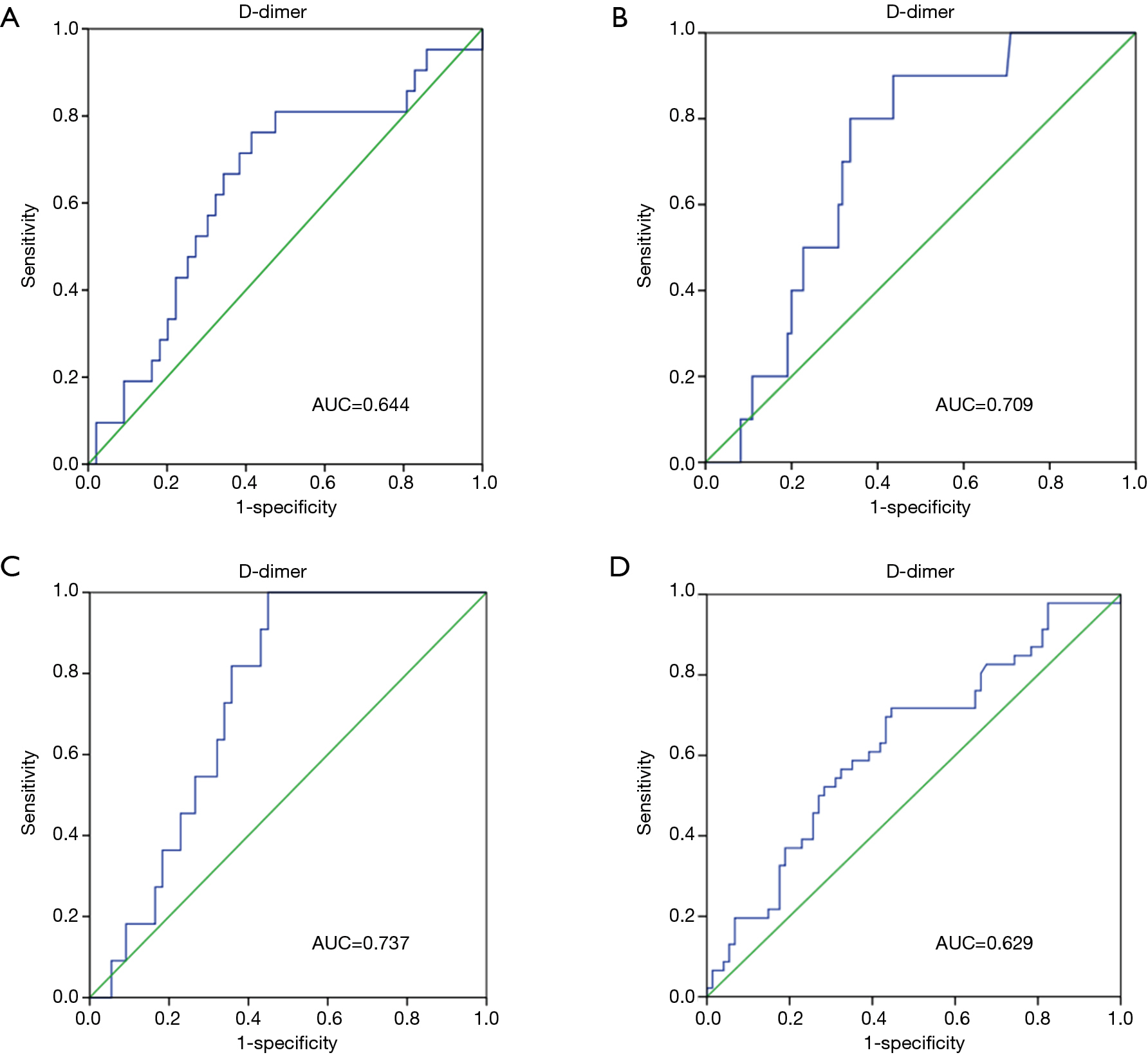 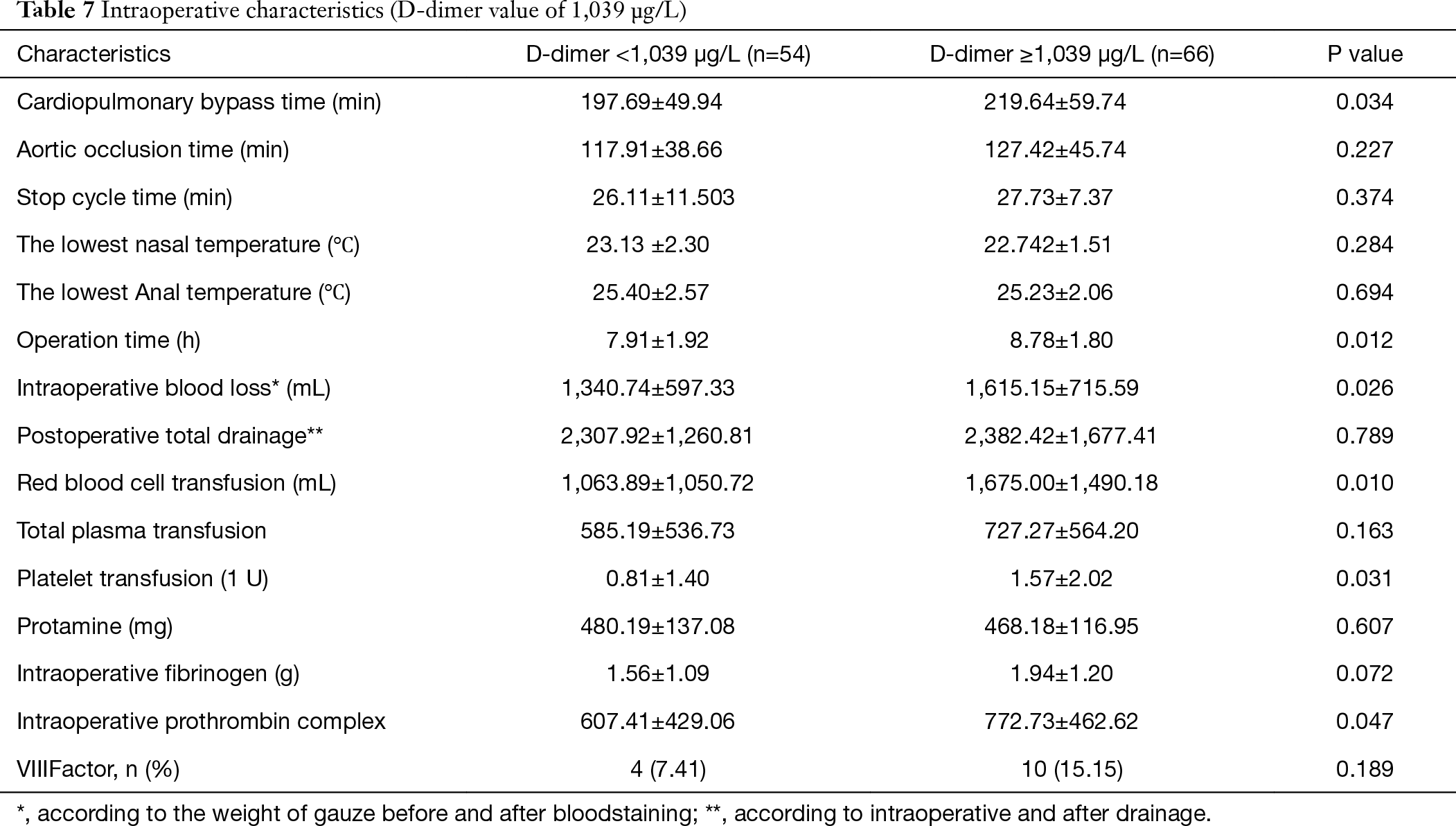 Renal dysfunction is one of the common complications after aortic dissection, the reason for large doses of vasopressors, renal hypoperfusion, massive transfusion, dissection false lumen involvement and other reasons. Large dose of vasopressors, renal hypoperfusion, massive transfusion are related to poor coagulation mechanisms. D-dimer is a commonly used clinical index to exclude pulmonary embolism and has been used as a diagnostic tool in aortic dissection patients. However, studies evaluating D-dimer in aortic dissection patients who undergo surgery have not been published (6). This study found that different levels of D-dimer before surgery can lead to changes in coagulation mechanisms during surgery, resulting in an increase in blood transfusion and use of hemostatic agents, resulting in acute renal dysfunction and requiring dialysis treatment.

In Stanford type A aortic dissection surgery, intraoperative and postoperative bleeding is a major cause of complications. Intraoperative and postoperative bleeding can lead to hemodynamic instability, blood transfusion complications, cardiac tamponade, thoracic bleeding, and even cerebral infarction. There is no reliable way to predict postoperative bleeding; platelet levels, clotting factors, and other parameters change little after anesthetic induction. In this study we investigated that in D-dimer over 3,000 µg/L groups, the coagulation mechanism was much worse, thus requiring more transfusion and hemostatic treatment (7). Our study population was divided into two groups: those with D-dimer levels less than 3,000 µg/L and those with D-dimer levels of 3,000 µg/L or higher (8).

Some patients with type A aortic dissection, in whom blood dissects between the tunica intima and tunica adventitia, will form a large number of thrombi. Many platelets and coagulation factors are consumed in this process, and the fibrinolytic system is activated, which leads to secondary fibrinolysis and eventually to increased D-dimer levels. Does D-dimer elevation suggest that the patient is in a secondary fibrinolytic and coagulation state? In this study, postoperative bleeding, blood transfusion, and use of anticoagulant drugs were higher in Group B than in Group A. The incidence of postoperative acute renal failure was also higher in Group B than in Group A because of greater blood loss intra- and postoperatively.

We selected 3,000 µg/L as the cut-off point for D-dimer level in this study based on clinical experience and previous studies that used this level as a predictor of risk. Our data confirm that D-dimer levels above 3,000 µg/L have effects on the coagulation system and renal function. However, there was no significant difference in thromboelastogram between the two groups. These results indicate that D-dimer levels had no effect on thrombosis. This finding may be related to the formation of thrombi in the patient's dissection, the consumption of a large number of coagulation factors, and fibrin degradation. The mechanism will be verified in future animal experiments. Previous experience has shown that a negative D-dimer test is useful in ruling out pulmonary embolism, aortic dissection, and other disorders.

In this study, prognostic value of D-dimer was evaluated using ROC analysis and the results showed that AUC of D-dimer as prognostic indicator for postoperative renal failure was 0.741 (95% CI, 0.642–0.840; P<0.001). When a D-dimer value of 1,039 µg/L was used as the cutoff, the corresponding sensitivity and specificity for distinguishing the high risk of dialysis after surgery in patients with Stanford A aortic dissection from low risk were 91.7% and 54.2%, respectively. Few studies have reported the clinical diagnosis and treatment value of D-dimer concentration. This study revealed the differences of clinical parameters in Stanford A aortic dissection patients after surgery grouped by D-dimer concentration of 3,000 and 1,039 µg/L (9). D-dimer concentrations above 3,000 µg/L at the time of anesthetic induction predicted greater blood loss in patients with aortic dissection, suggesting that thrombosis and fibrinolytic activity may occur after coagulation system activation. Advance planning in these patients, such as preparation of platelets, plasma, and hemostatic drugs, and streamlining the surgical method to minimize operation time and bleeding, such as retaining arch aortic arch surgery, can reduce postoperative complications (10). In our research, it found that when D-dimer is below 1,039 µg/L, the risk of dialysis after surgery in patients with Stanford A aortic dissection is low.

D-dimer above 3,000 µg/L increases the risk of dialysis after surgery in patients with Stanford A aortic dissection through the impact of the coagulation system.

When D-dimer is below 1,039 µg/L, the risk of dialysis after surgery in patients with Stanford A aortic dissection is low.

We would like to thank Ming Gong and Xiao-Long Wang for preparing the human samples and Jing Liu for their generous support and encouragement during this study.

Ethical Statement: This study adopted the consent of the ethics committee of Beijing Anzhen Hospital affiliated to Capital Medical University.