Incidence of malignancy and survival in patients with idiopathic pleuritis

In approximately 25% of patients with a unilateral pleural effusion, a thoracoscopic pleural biopsy shows no histological findings suggesting a possible etiology (1-8). Such cases are labelled non-specific pleuritis or idiopathic pleuritis, an umbrella term for a wide range of conditions including malignant pleural effusions (3-5).

All studies were single-center studies from highly specialized centers, no multicenter studies on neither incidence of malignancy nor mortality in idiopathic pleuritis after thoracoscopy exist.

On this background, we decided to perform a nationwide study investigating the incidence of malignancy and survival of patients with idiopathic pleuritis, i.e., unresolved pleural effusions after VATS.

Retrospective, observational, register-based, nationwide study including three years of follow-up in all patient undergoing a diagnostic VATS thoracoscopy ≤30 days after thoracentesis. The study was registered at clinicaltrials.gov (NCT03270228).

All Danish citizens are at birth provided a unique and permanent personal 10-digit identification code (the Danish Civil Registration Number), which is used in all national registries (9). The National Patient Registry has kept records of all hospital visits (out-patient or admissions) since 1978. Each hospitalization is coded according to the International Classification of Diseases 8th revision (until 1994) and 10th revision (from 1994) (10). The Danish Cancer Registry holds records of all incidences of malignant neoplasms including tumor characteristics from 1943 (11). Vital status was available from the civil registration system (12). We linked information from the above registries for each patient, using the Danish Civil Registration Number.

All patients in the National Patient Registry who underwent a VATS procedure between January 1996 and December 2013 AND preceded by a non-diagnostic thoracentesis ≤30 days.

If a patient had more than one VATS performed, the first was used as index for the analysis. We excluded patients with known malignancy at the time of index VATS.

The primary outcome was the three-year incidence of malignancy in patients with idiopathic pleuritis. Secondary outcomes were survival including comparison between patients diagnosed with a malignancy ≤31 days versus 1–36 months after VATS.

Based on the above, patients with idiopathic pleuritis consisted after three years of two groups: those who were respectively were not diagnosed with malignancy (1–36 months from VATS), see Table 1.

Data were presented as number and frequencies, median and range or 25th and 75th percentiles. The chi-squared test was used for comparing continuous data. The survival was depicted using Kaplan-Meier survival curves, and Log-rank test was used for comparing groups. We adjusted for age and gender, and because the clinical work-up has changed during the last 20 years including the general prognosis for cancer, we in addition adjusted for the year of thoracoscopy. Patients who died during follow-up was censored in the survival analysis. Data were analyzed using STATA (StataCorp LLC, Version 15.0, College Station, Texas, USA).

Retrospective register studies do not require ethical approval from the authorities in Denmark. The study was approved by the Danish Data Protection Agency (REG-87-2016). Data were anonymized.

We identified 839 patients and 658 patients were included in the analysis, see Figure 1 and Table 1. 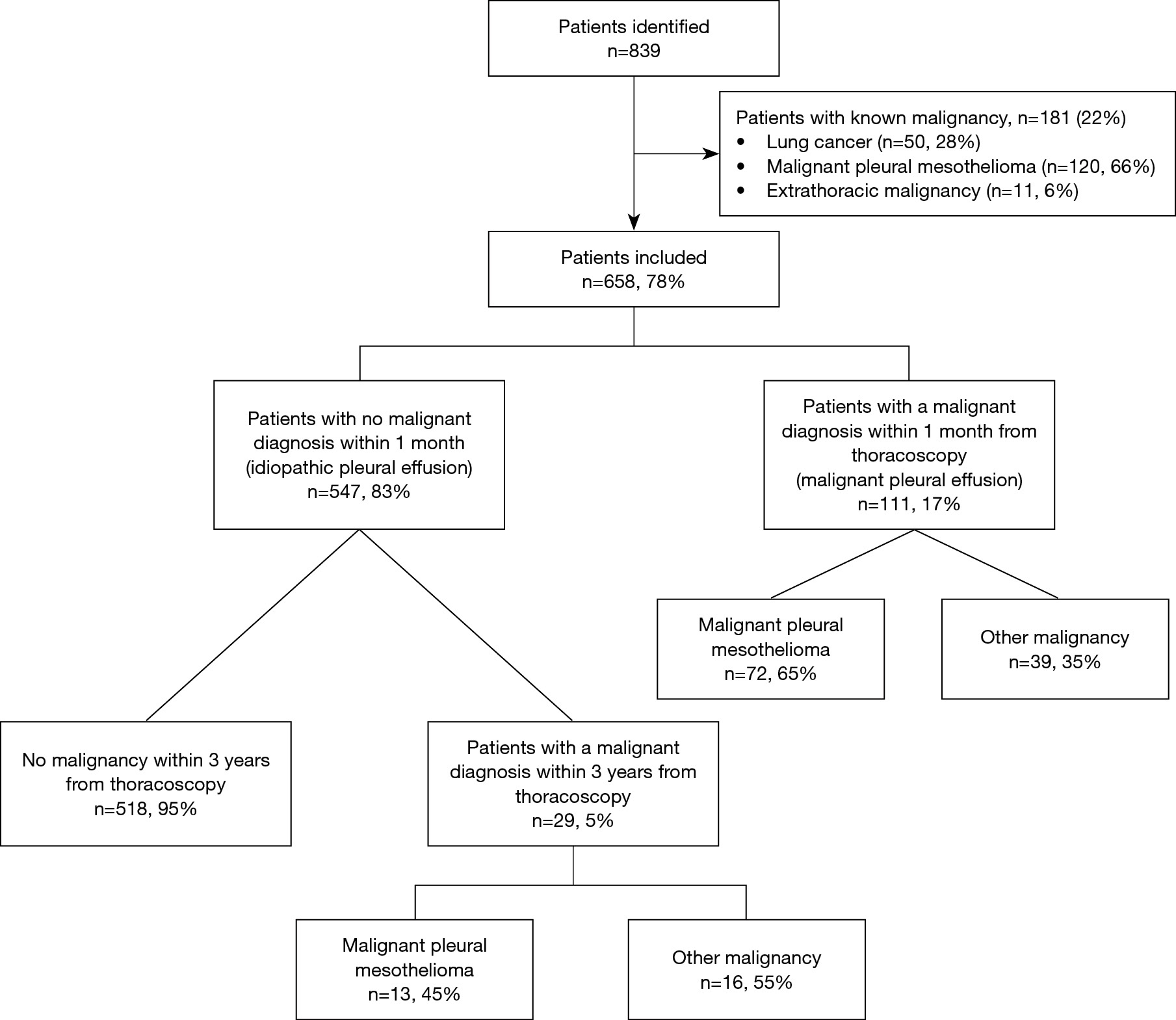 Figure 1 Overview of the study population.

One month after VATS, 547 patients (83%) were not diagnosed with malignancy and were classified as having idiopathic pleuritis.

Of these, 29 patients (5%) were diagnosed with malignancy during the 3-year follow-up period after VATS, see Figure 1 and Tables 1 and 2. 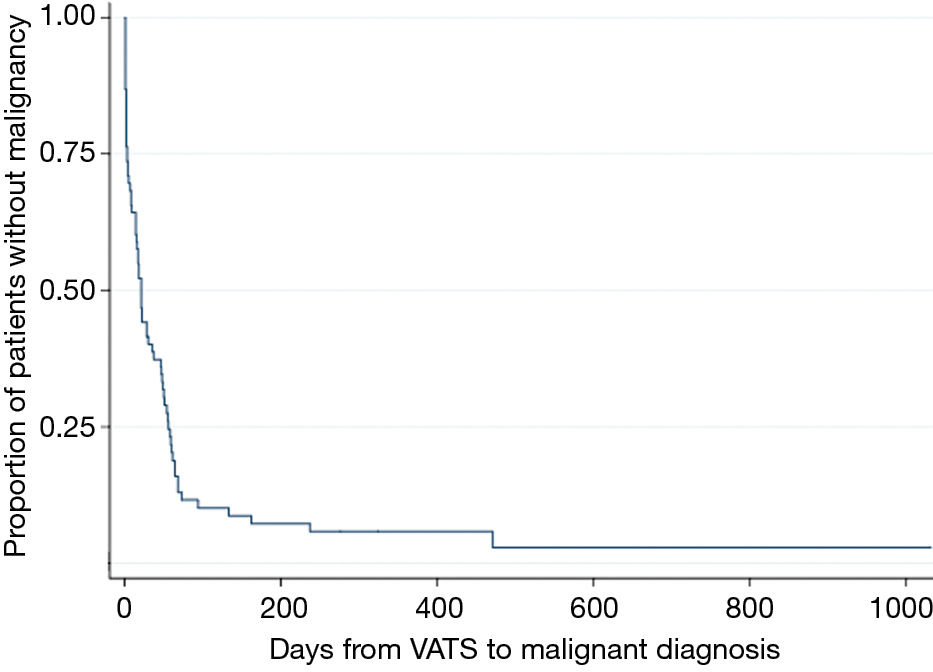 Incidence of malignancy during initial workup (≤31 days after VATS)

Figure 3 depicts the survival curves and Table 3 the corresponding numbers. Table 1 shows the median days of survival after VATS. Overall, patients diagnosed with malignancy lived significantly shorter after VATS than patients with no malignant diagnoses (P<0.001), however the median survival was around three years (Table 1). 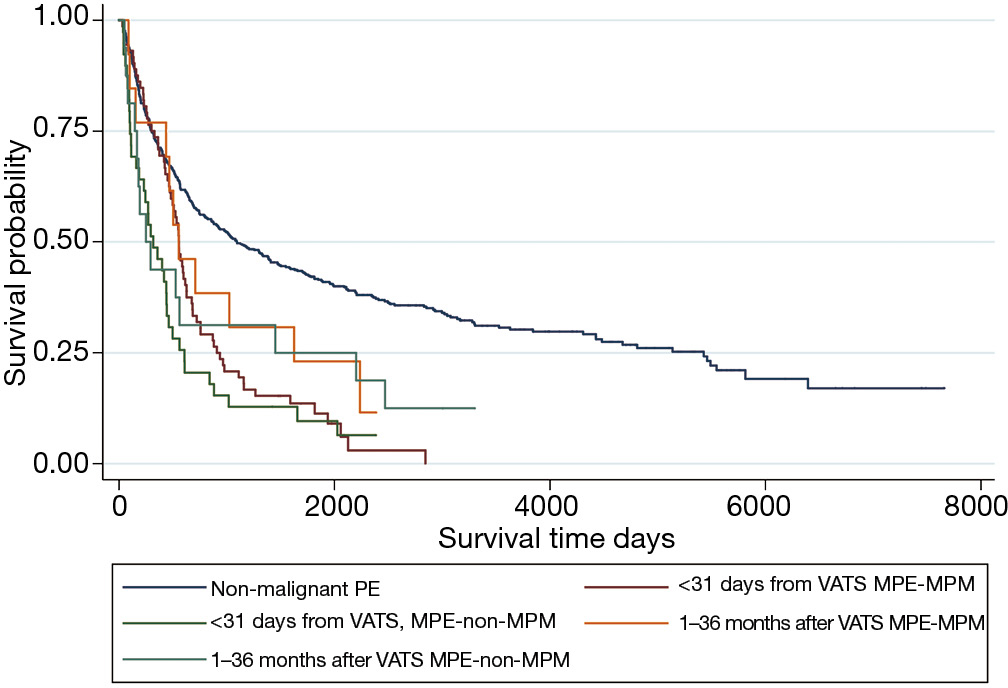 In the current study on patients with idiopathic pleuritis after VATS, we found an incidence of malignancy of 5%. Median survival from the initial VATS did not differ significantly between patients diagnosed early (≤31 days from VATS) vs. during follow-up (1–36 months after VATS).

Our findings were equal to cancer incidences found in four of the seven previous single-center studies (3.5–8.3%) (2,3,6,7). Several aspects might explain the disagreement with the three remaining studies. Most importantly, they all used pleuroscopy and not VATS as reference standard.

Additionally, differences in levels of asbestos exposure might have additional significance: One study from England performed in a tertiary center with an unreported but “high incidence of MPM”, found an incidence of malignancy of 12% after follow-up (4). One study from Turkey performed in an area with 60–80 times higher prevalence of MPM compared to Denmark (5), reported an incidence malignancy of 18%. The last study, from China, found an incidence of malignancy of 15% (8). The reported prevalence of MPM in China is lower than would be expected based on asbestos use and MPM-related mortality (third highest in the world) (13). However, another study from Turkey, using VATS as standard reference, found a comparable incidence of malignancy in idiopathic pleuritis as in our study (7). This may suggest that VATS have superior sensitivity to pleuroscopy in ruling out malignancy in pleural effusions of unknown origin (7,14). However, inter-center differences in experience of thoracoscopists and/or pathologists might also be of importance (15). No prospective studies so far have compared the sensitivity of pleuroscopy and VATS. A systematic review and meta-analysis found that pleuroscopy using a semirigid thoracoscope had a sensitivity of 91% and a specificity of 100% (including both malignant and non-malignant diagnoses) in 755 patients with pleural exudates (17 studies) (16). However, data for true negative cases were only available in seven studies, and only two studies provided data about follow-up duration (16).

Our data shows a low incidence (1.3%) of malignancy after completing the first 6 months of follow-up after index VATS.

On the other hand, numbers needed to follow-up for identifying one case of malignancy during the first 6 months was 18. This might influence future decisions on follow-up intensity and duration of idiopathic pleuritis. The lower the pre-test probability, the higher the risk of false-positive results, thus we have concerns about potentially harming the vast majority (here: 98.7%) without malignancy.

Median survival in patients with idiopathic pleuritis without a diagnosis of malignancy during follow-up was surprisingly low (3 years; Table 1). This may indicate that being evaluated for possible malignancy-associated pleural effusion by VATS, i.e., having recurrent pleural effusion is a marker of significant and serious yet non-malignant condition. It is well-known that pleural effusions may in many cases have more than one cause (17). However, there are no long-term prospective studies on possible benefits or risks of follow-up in these patients, yet systematic evaluation for thyroid, renal, hepatic and heart disease increased the number of targetable diagnoses (18). One could also consider under-diagnosis of malignancy as Table 3 shows similar mortality rates in all groups during follow-up. The current paper does not address cause of mortality, which could be an issue of futures studies. A recent US autopsy study indicates that undiagnosed malignancy related to cause of death is rare (3.1% of cases) (19).

To the best of our knowledge, this is the largest (>600 patients) and first nationwide study with a uniform follow-up (3-years) of patients with idiopathic pleuritis. The Danish health care system is free for all Danish citizens, and there are no private hospitals or services performing any kind of thoracoscopy or other pleural procedures. The unique personal registration number allows fusion of several national databases, allowing high data completion and includes diagnoses from out-patient clinics, admission and emergency-care.

However, the registry-based design has several limitations. Firstly, our study concerns predominantly VATS, not pleuroscopy. In Denmark, workup of pleural effusions is performed in 14 pulmonology centers: 12 centers refer to VATS at the local department of thoracic surgery if thoracoscopy is needed. Only two centers offer pleuroscopy (20). Thus, the majority of thoracoscopies in Denmark are performed as VATS procedures.

Secondly, we arbitrarily chose a maximum time span from thoracentesis to thoracoscopy of ≤30 days. Increasing this time span, we would have identified additional patients, yet also introduced heterogeneity in our study population (e.g., patients undergoing VATS for other reasons than a pleural effusion). Therefore, there is a risk that we might have underestimated the number of patients with idiopathic pleural effusions and hence malignancy.

Thirdly, the categorization of receiving a diagnosis within or later than 1 month after VATS is arbitrary. However, in Denmark histopathological analyses are finished within 10 days, often shorter. The Danish National Patient Registry includes diagnoses from all kind of hospital contacts, thus the time spent from final histopathological analysis to patient information and diagnosis registry is much less than 31 days. Thus, we consider 1 month after VATS to be sufficient time to allow for both biopsy handling, lab analyses, patient information and diagnosis registration.

Fourthly, tuberculosis is a common cause worldwide of idiopathic pleuritis. However, in Denmark, the incidence of pleural tuberculosis is very low (2016: 11 cases =2.0 pr. million inhabitants) (21). The external validity regarding risk of incidence of malignancy in idiopathic pleuritis might therefore be limited to countries with similar rates of TB as well as asbestos exposure.

Lastly, as discussed earlier a substantial number of patients died during follow-up in all groups, see Table 3. Thus, it is possible that patients classified as non-malignant idiopathic pleuritis may have died from (or with) undiagnosed malignancy. Future studies will clarify the likelihood of missed malignant diagnoses.

Our study do not provide insight into which procedure that provided the histopathological evidence of malignancy, neither in those diagnosed early nor in those diagnosed during follow-up. Our study shows that the risk in the idiopathic pleuritis group of being diagnosed with malignancy decreased rapidly within the first year after VATS: numbers-needed-to-follow-up increased to 260 after the first year. In summary, we suggest that routine follow-up of pleuritis after inconclusive VATS thoracoscopy is limited to 1 year (6,8), and follow-up includes medical history, clinical examination and chest ultrasound after 2, 6, and 12 months. This initial status guides the use of further testing such as other imaging (CT, PET-CT) and/or invasive workup. Future clinical and prospective studies are needed to clarify the ideal follow-up program.

We suggest a schedule for follow-up of idiopathic pleuritis limited to 12 months and limiting routine use of CT. Our study needs repetition in countries with higher incidences of pleural tuberculosis.

Ethical Statement: Retrospective register studies do not require ethical approval from the authorities in Denmark. The study was approved by the Danish Data Protection Agency (REG-87-2016). Data were anonymized.