Effects of yoga training in patients with chronic obstructive pulmonary disease: a systematic review and meta-analysis

Chronic obstructive pulmonary disease (COPD) is an important cause of morbidity and mortality and poses a major public health problem. By 2020, COPD is predicted to rank as the third leading cause of death worldwide, whereas its social burden will rank fifth (1-3). COPD is characterized by irreversible airflow obstruction, a gradual decline in lung function, loss of lung tissue, reduced quality of life, and high rates of mortality. The Global Initiative for Chronic Obstructive Lung Disease (GOLD) management includes a reduction in symptoms, complications, and exacerbations, improved exercise tolerance, improved health status, and reduced mortality (2). Recent evidence-based clinical practice guidelines and statements have shown that pulmonary rehabilitation is widely accepted as the most effective non-pharmacotherapy in the management of COPD (4). Research have indicated that various exercises, such as upper extremity exercise (5), Tai Chi (6), and yoga training (7), can relieve dyspnea, improve lung function, and improve the quality of life of COPD patients. Furthermore, a physical therapist-assisted intensive flexibility training that focuses on stretching and rib cage mobilization can significantly improve 6-min walking distance (6 MWD) (8).

Yoga originated in ancient India, and may denote the union between the individual self and the transcendental self. The body’s organs and systems are cleansed through asanas (postures) and pranayama (controlling the breath). Along with meditation, yoga asanas and pranayama have become popular in the West, and the practice of yoga has become “westernized.” Postures are taught as ends in themselves, that is, to heal an illness, reduce stress, or to look better (9). Yogic exercises have been shown to have positive effects on people with asthma (10,11), cardiac diseases (12), diabetes (13), tuberculosis (14), depressive disorders (15), osteoarthritis (16), and pleural effusion (17).

A number of clinical trials have suggested that yoga training may improve the pulmonary function of patients with COPD (18,19), but the quality of these studies have not been evaluated systematically. Therefore, we undertook a systematic review and meta-analysis of available randomized controlled trials (RCTs) to assess the efficacy of yoga training on pulmonary function and other clinical endpoints in patients with COPD.

The following electronic databases were searched: PubMed, Embase databases, Cochrane Central Register of Controlled Trials, Google Scholar, and ClinicalTrials.gov (until Jan 2014). The employed keywords were “yoga” and “COPD,” or “yoga” and “COPD”. The searches were limited to English publications in humans as well as RCTs. Bibliographies of all potentially relevant studies, articles (including unpublished data and meta-analyses), and international guidelines were manually searched. Furthermore, we also attempted to contact the authors of potentially relevant studies to obtain additional information.

The methodological quality of each research was evaluated using the Jadad scale (20). A score ≤2 indicates low quality, whereas a score ≥3 indicates high quality (21). The risk of bias was assessed using the Cochrane Handbook for Systematic Reviews of Interventions (http://ims.cochrane.org/revman). Two authors (Xun-Chao Liu and Lei Pan) subjectively reviewed all studies and assigned a value of ‘high,’ ‘low,’ or ‘unclear’ to the following: (I) selection bias (was there adequate generation of the randomization sequence? was allocation concealment satisfactory?); (II) blinding (i.e., performance bias and detection bias) (was there blinding of participants, personnel, and outcome assessment?); (III) attrition bias (were incomplete outcome data sufficiently assessed and dealt with?); (IV) reporting bias (was there evidence of selective outcome reporting?); and (V) other biases (was the study apparently free of other problems that could place it at a high risk of bias?).

This systematic review and meta-analysis is reported in accordance with the Preferred Reporting Items for Systematic Reviews and Meta-Analyses statement (22). We used Revman version 5.1 software for all data and statistical analyses. For continuous outcomes, the pooled mean difference was calculated by using the weighted mean difference (WMD). Heterogeneity was assessed with the I2 statistic and defined as low (I2≤25%), moderate (25%<I2≤50%), or high (I2>50%) (23,24). A random-effects model was undertaken whether heterogeneity was high or not. Potential publication bias was not assessed because of the limited number of studies (<10) included in each analysis. A P value of <0.05 was considered statistically significant. The overall treatment effect was compared with its minimal clinically important difference (MCID).

Figure 1 shows the study search process according to PRISMA guidelines (22). Of the 11 studies retrieved from the initial search, six met our inclusion criteria (7,18,19,25-27), but one study was excluded upon secondary analysis (27). The reasons for exclusion are presented in Figure 1. Finally, five RCTs, which had a combined cohort size of 233 participants, were selected for this meta-analysis, and their main characteristics are presented in Table 1. The sample size per RCT ranged from 30 to 100. These studies were published between 1978 and 2012, and their duration ranged from 12 weeks to 9 months. Four RCTs reported FEV1 (18,19) or FEV1% (7,25), and two RCTs reported 6 MWD (7,25). Meanwhile, two RCTs reported PaO2 and PaCO2 (18,19). The mean Jadad score of the studies included was 2.4 (SD=0.89). The risk of bias analysis is presented in Table 2. 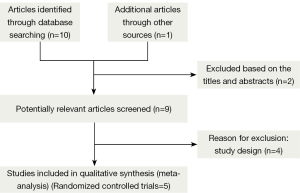 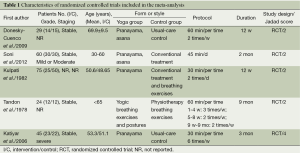 This study is the first meta-analysis to evaluate the effects of yoga training on COPD patients. Our results suggested that yoga training has a positive improvement effect on lung function and exercise capacity and could be used as an adjunct pulmonary rehabilitation program for COPD patients.

Currently, no drugs could hinder the progress of COPD, but lung training and pulmonary rehabilitation have been shown to reduce disability in many chronic respiratory diseases and have become valuable means of COPD treatment (30-33). Studies have indicated an increase in tidal volume and FVC, reduction in respiratory rate, increase in FEV1, FEV1%, maximum voluntary ventilation, and breath holding capacity after short-term yoga practice (34,35). Furthermore, studies suggested that yoga training may improve exercise capacity, prevent lung function decline, improve quality of life, and reduce dyspnea in patients with COPD (36,37). However, these studies did not provide adequate data or sufficient clinical evidence to support the beneficial effects of yoga training on these relevant findings.

Our results suggested that yoga training improved FEV1 or FEV1% pred in four studies (7,18,19,25). However, the results required comparison with the MCID, which is defined as the smallest change in the measurement used to evaluate the clinical significance of intervention effects. The MCID is claimed to be a 100-mL change in FEV1 from baseline (28), and the 123.57 mL increment in FEV1 in our study is greater than the MCID. This result indicates that yoga training can have a clinical effect on COPD patients. Unfortunately, we failed to compare further the FEV1% pred with the MCID because of insufficient available data. Our meta-analysis also found that yoga training statistically improved 6 MWD in patients with COPD. The 38.84 m change for 6 MWD was greater than the MCID (≥26 m) (29). However, our meta-analysis showed that yoga training did not affect arterial blood gas analyses, which included PaO2 and PaCO2. PaO2 and PaCO2 are affected by various factors, such as temperature factors (38), breathing frequency (39), varying levels of light intensities (40), sampling location, blood volume, and inspection time (41). We believed that PaO2 and PaCO2 are not suitable evaluation parameters of yoga training in COPD patients because of their instability. However, further study is needed to investigate this noteworthy topic.

The mechanisms of yoga training responsible for its beneficial effects that differ from other forms of exercise have yet to be elucidated. Several factors may be responsible for the beneficial effects seen in the patients undergoing yoga training aside from exercises (42-45). Yoga training aids in toning up general body systems (42), increasing respiratory stamina, relaxing chest muscles, expanding the lungs, raising energy levels, and calming the body (43). Additionally, yoga training improves blood circulation and increases the strength of respiratory muscles (44). Finally, yoga training also helps patients to breathe more deeply by utilizing the shoulder, thoracic, and abdominal muscles efficiently (45).

Yoga training can provide a complementary strategy for patients with COPD. Apart from relaxing tense muscles, yoga can also alleviate mental pressure (15). However further studies are needed to examine the effectiveness of yoga training compared with other breathing exercises. Our study showed follow-up durations that ranged from 12 weeks to 9 months, and the long-term effects of yoga training optimal exercise duration currently remain unknown. Future research should focus on optimizing training intensity, duration, and frequency. Moreover, it should be emphasized that the severity may greatly influence the effect of yoga. However, not all studies have noted the severity of COPD patients. Further research should focus on the relationship between the severity and efficacy in COPD patients, which can help to determine the best yoga exercise prescription and the best suitable patients. Finally, most studies lacked other physiological outcome measures, such as inflammatory biomarkers, continuous monitoring, sensitive measures of change, and peripheral muscle strength. Further studies that focus on these will enrich clinical evidence regarding yoga.

Several limitations are identified in our study. First, included trials significantly varied in terms of interventions protocol, duration, patient populations, severity, and study quality, which limit the conclusive extent for the overall effectiveness of yoga training on FEV1, FEV1% pred, 6 MWD, and blood gas analysis in COPD patients. Secondly, our analysis is based on only five RCTs, and only a maximum of two studies were available for the main outcomes. In addition, studies ranged from 1978 to 2012 hence it encompasses a wide time frame which may affect the results as over the years better drugs are available such anticholinergics to ameliorate symptoms of COPD and more standardized and accurate methods are available to measure some clinical endpoints such as lung function and arterial blood gas analysis. Moreover, these studies have a wide variation in patient populations. The smaller sample size of trials may have significantly overestimated the treatment effect. Finally, several missing and unpublished data may lead to bias.

Our meta-analysis suggested that yoga training that lasts from 12 weeks to 9 months may improve lung function and functional exercise capacity in patients with COPD compared with conventional therapy. Moreover, we suggest that yoga could be a useful adjunct pulmonary rehabilitation program for COPD patients. To help clarify the issue, further rigorously designed, larger-scale trials should be conducted to evaluate the long-term effects of yoga training in COPD patients.

We would like to thank the authors of the original studies included in this meta-analysis.