Spread through air spaces in lung adenocarcinoma: is radiology reliable yet?

The concept of tumor spread through air spaces (STAS) in lung adenocarcinoma was officially recognized as a pattern of invasion in 2015 World Health Organization (WHO) classification. The STAS is defined as the presence of “micropapillary clusters, solid nests, or single cells beyond the edge of the tumor into air spaces in the surrounding lung parenchyma” within the surgical specimen (Figure 1), which implies a post-surgical diagnosis (1). The pathological evidence of STAS is a negative prognostic factor, especially for early lung cancer treated by limited lung resection (e.g., segmentectomy) (2,3). Therefore, pre-surgical characterization of lung cancer features has gained much interest for the optimal surgical planning. This led to investigation of potential association of STAS with computed tomography (CT) features, as recently addressed by three research groups who aimed to radiological prediction of invasion of air by the tumor (4-6). 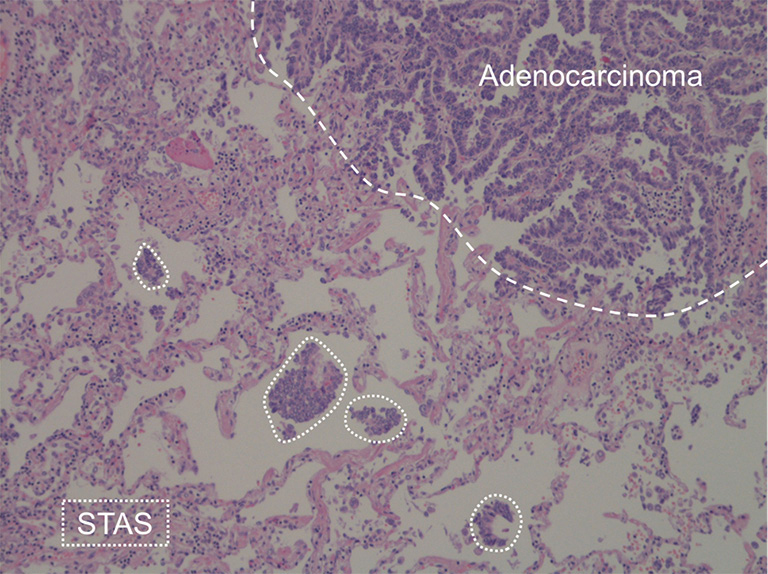 Toyokawa et al. retrospectively investigated lung cancer CT in 327 patients with resected adenocarcinoma (4). By univariable analysis, they demonstrated that STAS-positive adenocarcinomas were significantly larger and showed spiculation, pleural indentation, vascular convergence, and nodular notch. Conversely, the non-solid component was negatively associated with STAS. Their multivariable analysis highlighted STAS in independent association with nodular notch and absence of non-solid component. The nodule density was particularly tested by Kim et al., who reported that the risk of STAS can be apportioned by calculating the percentage of solid component within the neoplastic nodule on CT (5). Moreover, de Margerie-Mellon et al. specifically addressed adenocarcinomas presenting as subsolid nodules on CT, either non-solid or part-solid (6). This latter analysis is utmost interesting because the subsolid nodule is known for its relatively slow clinical potential, therefore limited surgical resection appears particularly suitable for this subtype of nodule density.

According to the three studies (4-6), the solid component was a risk factor for STAS, or, otherwise, the presence of abundant non-solid component was a good prognostic factor for progression free survival. This feature along with the overall nodule size might be interpreted within the acknowledged signs of tumor aggressiveness and they appear relatively more reproducible than other morphological descriptors proposed by the referenced papers (e.g., the notch sign and irregular shape). These studies represent the very first radiological attempts of pre-surgical stratification of STAS likelihood, by means of CT. Their major intrinsic limit is compelled by the need for nodule resection and pathological documentation of STAS. Notably, a potential selection bias applies because resection is more likely offered for larger and solid nodules, as well as for rapidly growing and/or metabolically active lesions (both signs of relatively aggressive biological behavior) as confirmed by the relatively high relapse within the first year since resection (5). Nonetheless, it is indeed an excellent beginning of a brand-new radiological challenge in the era of personalized medicine. The present results show that there is the opportunity for specific risk stratification of small adenocarcinoma. Yet, it is to be acknowledged that the reported sensitivity of CT features is still somewhat low in diagnosing STAS, therefore limited resection should be applied cautiously (7). The refinement of CT criteria is fostered and validation of its contribution is warranted for early stage lung cancer before clinical applicability.

Kim et al. specifically addressed the presence of satellite nodules adjacent to the main tumor (5). Such macroscopic finding was not associated with STAS, which otherwise is a microscopic phenomenon. Hence, the authors confirmed that direct signs of STAS are far beyond the spatial resolution of state-of-the-art CT scanner, even on high-resolution CT images (Figure 2). This observation suggests that STAS prediction by CT should be investigated by indirect signs rather than with direct visualization of this type of air space invasion (5). The present evidence is particularly robust because the authors applied a strict classification of STAS in those tumors which can show macroscopic findings in association with bronchial diffusion of neoplastic cell clusters. For instance, mucinous adenocarcinoma could show diffusion of neoplastic cells in the air spaces along with mucin filling; such case scenario was specifically excluded from the classification of STAS. 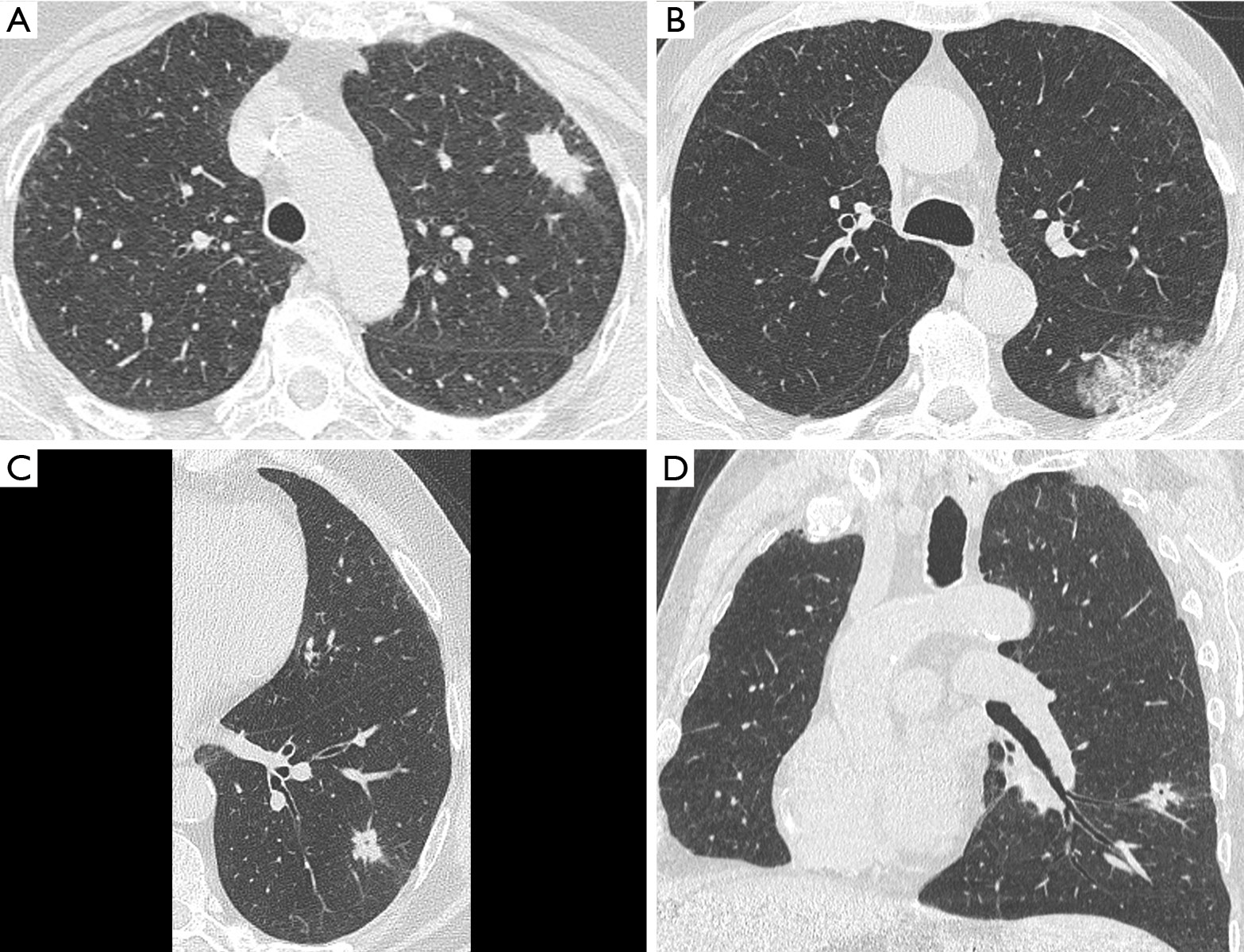 Characterization of nodules by CT relies on appropriate acquisition and reconstruction parameters of images, especially for subsolid nodules. The three studies of this editorial developed from retrospective databases with different CT technical parameters, which inevitably brought to technical limitations. Both Kim and Toyokawa included CT scans section thickness of 2 mm or above, which are beyond the maximum threshold for reference quality by the Fleischner Society recommendations for lung nodule characterization (8). Furthermore, Kim and de Margerie-Mellon included enhanced CT scans, which might interfere with nodular density in the assessment of subsolid nodules. Interestingly, the technical heterogeneity was reflected by variability in STAS frequency by nodule density and proportion of non-solid component. The frequency of STAS-positive adenocarcinoma among non-solid nodules was 0% at 2.5–3 mm thickness (5), 5.3% at 2 mm (4), and 15% at <1.5 mm (6). It could be argued that the thicker the slice, the lower the frequency of non-solid nodules with higher prognostic impact. In particular, this observation might be interpreted within the results of Kakinuma et al. who showed that non-solid nodules with relatively higher density are indeed more frequently associated with neoplastic progression (9). Such higher-density non-solid nodules might have been rated as part-solid or solid nodules in case of thicker slices, thus such results might have limited applicability in the current appropriate high-resolution CT. The appropriate CT technique is paramount to perceive minimal densitometric heterogeneity, especially when it is a predictive factor of variable nodule biology. Furthermore, authors relied on visual assessment, which makes interpretation and density measurements questionable and hardly reproducible, given the documented intra- and inter-reader variability (10). The debate about STAS has just started in radiology and it seems that the variability in CT scoring will be a substantial concern (11).

The overall nodule size remains a critical feature for tumor prognostication according to STAS risk, as it was already reported for other histologic features with prognostic impact (12). In the field of lung neoplasms with limited malignant potential, non-solid nodules show good association between overall size and likelihood of stromal invasion (13). Nevertheless, also stromal invasion by CT measurement has some degree of variability when it is applied to a single time-point CT (14). Longitudinal characterization of such CT findings with potentially limited prognostic impact should be investigated with the aim of improving the radiological capability to predict progression to clinically relevant disease (15). Indeed, limited resection or even no resection might be a convenient option in selected cases. Noteworthy, limited resections or even long-term surveillance were demonstrated to be safe in the management of nodules with lower clinical potential in lung cancer screening, thus allowing for personalized treatment with reduction of overdiagnosis and overtreatment (16).

The cutting-edge technology in radiology includes quantitative analysis to restrict both intra- and inter-reader variability, and thus increase reader objectiveness and outcome repeatability (17-19). The application of a computer aided diagnosis (CAD) approach is gaining interest in both radiologists and oncologists for standardization of lung cancer characterization (20) and early definition of response to medical therapy (21). The most advanced techniques of CAD include deep analysis of CT data that are not perceivable by the “human reader”, it is called radiomics (22). Recent approaches to pre-surgical lung nodule characterizations showed that radiomics analyses of both nodular and peri-nodular features are effective for stratification of malignancy (23). It is fostered that future studies will test such a radiological approach against the pathologic evidence of STAS.

Two studies included a majority of patients treated with lobectomy or pneumonectomy, whereas only a relatively small percentage had undergone sublobar resection. Of note, significantly higher prevalence of STAS-positive cancers was observed within the group of patients treated with lobectomy or pneumonectomy (4,5). These observations suggest that the current CT standards for surgical planning (by size and nodule density) can already stratify for STAS risk, and the most recent literature provides further insights for further development (7). Nonetheless, it must be kept in mind that the evidence of STAS is also still debated among pathologists, notably methodological issues apply.

The concept of a tumor spreading via the air spaces is relatively new and vague, to some extent. The underlying mechanism is still unknown. Some authors propose a skeptical point of view on STAS, as the dispersion of cellular islands to air spaces could even represent an artifact from tissue handling by the pathologist or by the surgeon (4). Both theories are interesting and might be discussed within the actual prognostic value of STAS (2). The original thinking about STAS was based on 2D pathology with evidence of cellular islands lying in the air spaces separated from the main tumor. In 2012, Onozato et al. improved the general understanding of STAS in lung adenocarcinoma: 3D-reconstruction method to analyze paraffin embedded sections demonstrated cellular islands of STAS with interconnections between one another, as well as with the main tumor (24).

Several studies have demonstrated the association of STAS with some epidemiologic and genomic features. Male sex and smoking history have been proven to be positively related to STAS (25). This observation hints at the peculiar worse outcome of lung cancer in male smokers compared to female non-smokers. However, a significant correlation with neither sex nor smoking history was observed in the three studies discussed in this editorial (Table 1). With regard to the genomic aspects, STAS seems to correlate with BRAF- and KRAS-positive mutation and to be more often associated with wildtype EGFR (25,26). The integration of clinical-pathological and genomic data with radiological features into translational prediction models could provide a comprehensive characterization of the tumor and orientate surgical management in selection between major or minor lung resections.

The growing interest in personalized medicine is current subject of clinical relevance and radiologists are increasingly involved in the subtle stratification of patient risk, along with multidimensional clinical descriptors. Minimal lung resection is one scenario among those of personalized medicine and STAS appears as a remarkable variable in the selection of subjects who might benefit from limited surgery. The pre-surgical characterization of early lung cancer is therefore pivotal to improve the complex balance between tumor treatment and associated comorbidity. The studies discussed in this editorial provide an excellent start for development of radiological metrics of STAS risk.