Indocyanine green (ICG) accumulates selectively in primary hepatocellular carcinoma (HCC) and in extrahepatic metastases of HCC (1-3). ICG binds to plasma proteins and protein-bound ICG emits fluorescence with a peak at about 840 nm when irradiated with near-infrared light (NIR) (4). Based on this characteristic of ICG, the usefulness of intraoperative ICG fluorescence imaging has been reported for various thoracic surgical procedures (sentinel lymph node mapping, intersegmental plane identification, pulmonary nodule identification, etc.) (5). We previously reported that ICG navigation was useful when performing thoracoscopic resection of a pulmonary metastasis of HCC (6). In the present study, we investigated the characteristics and clinical usefulness of ICG fluorescence imaging in a series of patients undergoing thoracoscopic resection for pulmonary metastasis of HCC.

From April 2010 to June 2018, patients were enrolled prospectively according to the following criteria: (I) they had one or more pulmonary nodules that were suspected or confirmed to be metastatic HCC; and (II) they were scheduled for thoracoscopic resection of the pulmonary metastasis. Prior to surgery, all patients were administrated ICG (Diagnogreen, Daiichi-Sankyo Pharma, Tokyo, Japan) intravenously at a dose of 0.5 mg/kg for the ICG hepatic function test. The target outcomes of this study were as follows: (I) whether ICG fluorescence could be observed intraoperatively through the visceral pleura, (II) whether it was possible to secure an adequate surgical margin with wedge resection by intraoperative real-time fluorescence observation (in vivo observation), and (III) whether the tumors showed ICG fluorescence when imaging of cut sections was performed after resection (ex vivo observation).

For intraoperative ICG fluorescence imaging, we employed a NIR camera system for open surgery (HyperEye Medical System MNIRC-1000, Mizuho Medical Co. Ltd., Japan) from 2010 to 2013, and we used an endoscopic NIR camera system (D-LIGHT P, Karl Storz, Co. KG, Germany) during the subsequent period. In all patients, surgery was performed by thoracoscopy with a 3–7 cm mini-thoracotomy incision. Wedge resection was the standard procedure, while lobectomy was done when an adequate surgical margin could not be secured. Intraoperative observation of the visceral pleura was performed by irradiation of the suspected tumor site with NIR through the mini-thoracotomy incision when using the HyperEye Medical System, and by irradiation of NIR light from the tip of the scope when using the endoscopic system. A cut section of each tumor was also observed by using the same system after resection. All of the resected specimens were submitted for pathological examination.

In six patients, a total of 11 metastatic HCCs were resected at nine operations. ICG was administered from 1 to 3 days before surgery. All patients were men and they were all in Child-Pugh class A (Table 1). The median tumor diameter was 11 mm (range, 3–27 mm), and the median distance between the tumor and the visceral pleura was 0 mm (range, 0–35 mm). The surgical procedure and the number of tumors resected are listed for each patient in Table 2. Lobectomy was performed in two patients with 3 lesions (No. 2, 5, and 6), while wedge resection was performed to remove the other 8 lesions (No. 1, 3, 4, 7, 8, 9, 10, and 11). The HyperEye Medical System was used during resection of 3 lesions (No. 1–3) in two patients and the D-LIGHT P system was used for removal of the other 8 lesions (No. 4–11) in four patients. All resected lesions were confirmed to be metastatic HCC by histological examination. On intraoperative fluorescence imaging, 6 lesions (No. 1, 4, 7–10) showed ICG fluorescence through the visceral pleura. These 6 lesions were located from 0 to 2 mm below the visceral pleura, and were all managed by wedge resection. One subpleural lesion (lesion No. 3) did not exhibit ICG fluorescence because it was located at a site where it was difficult to perform NIR irradiation through the mini-thoracotomy incision. The remaining 4 lesions (No. 2, 5, 6, and 11) without visible ICG fluorescence were located more deeply from 11 to 35 mm below the visceral pleura (Figure 1). Lobectomy was performed for 3 of these lesions (No. 2, 5, and 6) and wedge resection was performed for 1 (No. 11). Lobectomy was chosen to secure the resection margin for lesion No. 2, which was located deep in the middle lobe. Lesions No. 5 and 6 were found in the same lobe at a deep location (30 mm from the pleura), so lobectomy was selected to obtain adequate margins for both lesions. Intraoperative ICG fluorescence was detected in 6 out of 7 lesions that were treated by wedge resection, apart from one lesion located at a site where NIR irradiation was difficult. For the 6 lesions (lesion No. 1, 4, 7–10) showing intraoperative fluorescence and treated by wedge resection, the median surgical margin was 14 mm (range, 11–17 mm) (Table 2). On cut sections, all of the tumors emitted fluorescence. Representative imaging findings and fluorescence images are shown in Figure 2. 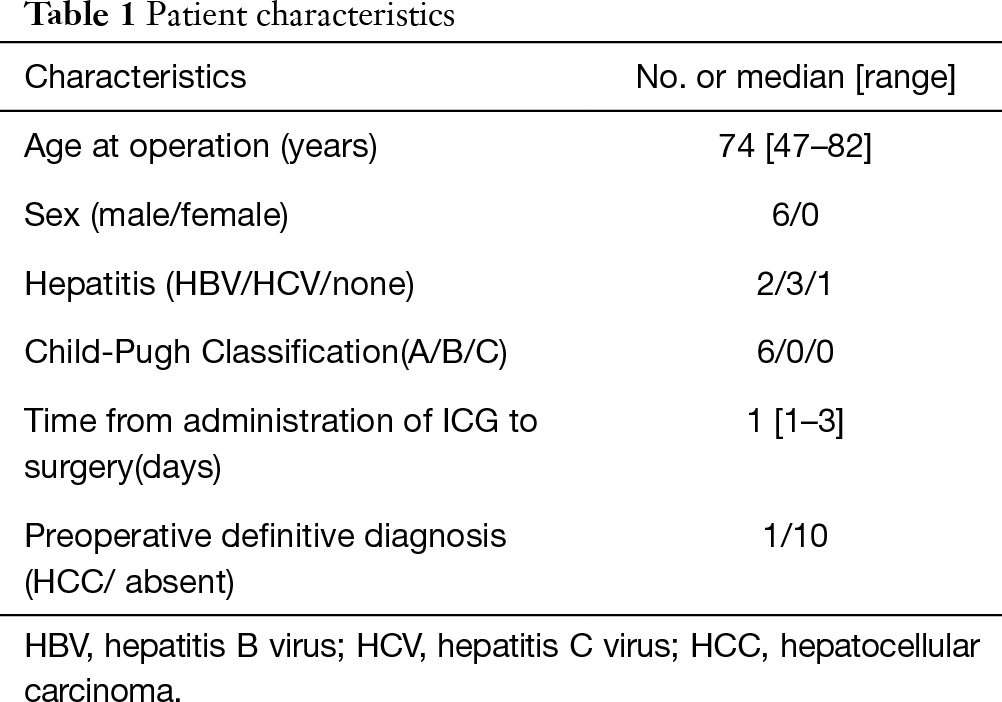 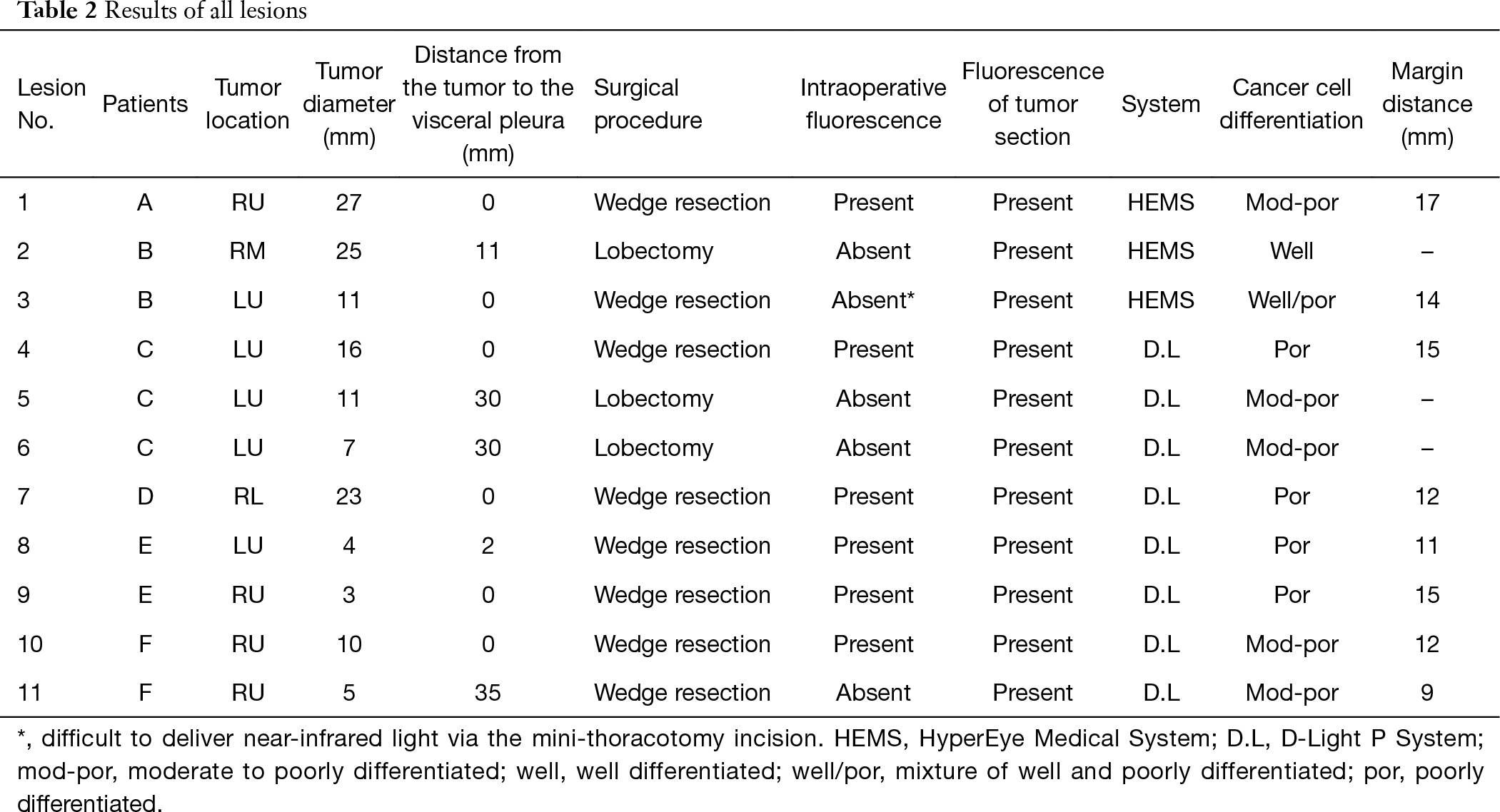 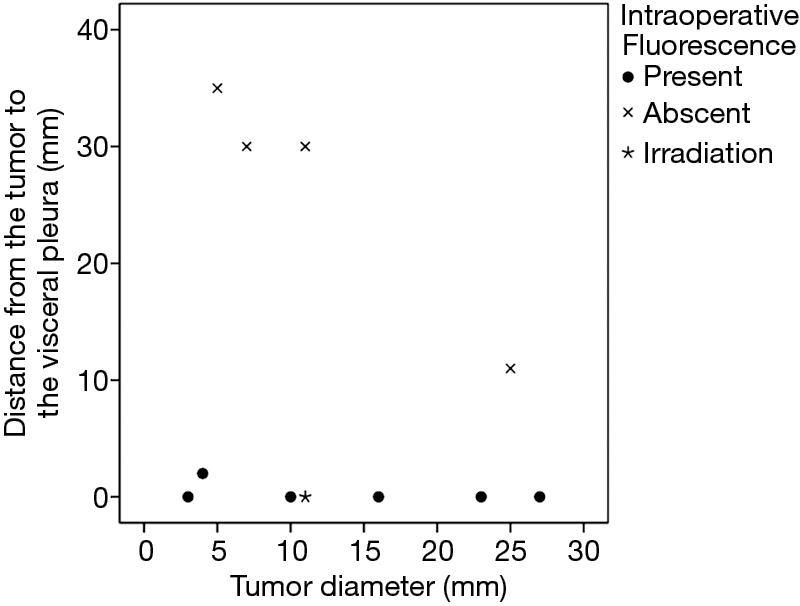 In this study, we demonstrated that all pulmonary metastases of HCC emitted fluorescence when cut sections were irradiated with NIR after administration of ICG before surgery. To our knowledge, ICG fluorescence imaging for pulmonary metastasis of HCC has only been reported previously in two patients by Satou et al. (3) and in one patient by us (included in this series) (6). This finding suggests the possibility of ICG fluorescence imaging contributing to identification of tumors during surgery.

Hepatocytes take up ICG from the blood and excrete it into the bile. HCC retains this function, but destruction of the biliary tree by tumor progression is considered to lead to accumulation of ICG in the tumor (2). Because there are no bile ducts in the lungs, fluorescence can still be observed in metastatic HCC at 1 to 3 days after ICG administration due to delayed excretion from the tumor. In this series, the sensitivity of ICG fluorescence imaging of cut tumor sections was 100% (11/11). However, Satou et al. reported one false-negative lymph node metastasis among 27 patients with extrahepatic metastasis of HCC (3). Therefore, the possibility of false-negative tumors cannot be completely excluded, but it seems to be rare. Regarding false-positive results, Kitagawa et al. reported that 29 out of 250 fluorescence-positive resected lesions were not pulmonary metastases of HCC on pathological examination (7). Using fluorescence microscopy, they demonstrated that normal alveolar cells and thrombi emitted fluorescence in the false-positive lesions. Although there were no false-positive lesions in our study and that of Satou, false positive fluorescence may occur and careful attention is necessary.

There have been recent reports of primary lung cancer and solid cancer showing ICG fluorescence (8-11). However, ICG was administered at a dose of 5 mg/kg in these studies, which was 10 times the dose we used for the ICG liver function test. In a mouse model of subcutaneous tumor transplantation, the tumors did not show fluorescence at ICG doses below 1 mg/kg (8). However, it should be easy to use ICG clinically when performing surgery for pulmonary metastasis of HCC because fluorescence can be detected at an ICG dose of 0.5 mg/kg, which is the same as the dose for testing liver function.

Intraoperative fluorescence imaging allowed detection of 6 out of 11 lesions through the visceral pleura, suggesting that this method may be useful for localization of tumors during thoracoscopic surgery. Thoracoscopic surgery has become widely used because it is less invasive (12), and about 80% of pulmonary metastasectomy procedures are done thoracoscopically in Japan (13). The problem with performing thoracoscopic wedge resection is that palpation tends to be inadequate, which makes it more difficult to localize the tumor. Although various marking methods have been devised to overcome this problem (14-16), the markers have to be placed accurately near the tumor for these methods to succeed. With the present method, the tumor itself shows ICG fluorescence, so it is considered to be more useful for localization of the lesion and obtaining a secure margin. The main problem with the present method is the partial tissue penetration of near infrared light. In previous studies, ICG fluorescence could be confirmed up to a tissue depth of 5–13 mm (11,17). If the tumor is so deep within the lung parenchyma that lobectomy is required, it will be difficult to identify by fluorescence imaging. However, when the tumor is located at a peripheral site in the lung and wedge resection is planned, fluorescence imaging may be useful. In this series, intraoperative fluorescence imaging through the visceral pleura confirmed of the 6 lesions in 8 lesions for which wedge resection was performed. The tumor was 0–2 mm below the visceral pleura in these patients. Intraoperative fluorescence imaging was particularly useful for a tumor with a diameter of 4 mm that was 2 mm below the visceral pleura (lesion No. 8). No pleural changes were evident and the lesion could not be detected with unimanual palpation. Only fluorescence revealed the location of tumor and thoracotomy could be avoided. However, one lesion located immediately under the visceral pleura (0 mm) could not be detected by fluorescence imaging because NIR irradiation through the mini-thoracotomy incision was too difficult due to the tumor location. This problem has been overcome by introducing an endoscopic NIR camera system, which has become widely available in recent years. In the 6 lesions showing intraoperative fluorescence that were treated by wedge resection, a surgical margin of 10 mm or more could be achieved. In metastasectomy for pulmonary metastasis, an adequate margin is important to prevent local recurrence. Although there has been little investigation of the optimal margin, it is recommended to secure a margin of at least 5 mm and preferably at least 10 mm (18,19). Since the tumor cannot be palpated during thoracoscopic surgery, the margin tends to be inadequate (20). Intraoperative fluorescence imaging may be useful for securing an adequate surgical margin because fluorescence can be easily confirmed in real-time during surgery by switching on the NIR camera.

Furthermore, this method has the advantage of ICG being inexpensive (\525 ≈ $US 6 per 25 mg) and it is also safe because it employs the same dose of ICG used for liver function testing. While purchasing a NIR camera system is costly, it is worth trying this method if a camera has already been installed.

The chief limitation of this study was the small number of cases. Because we did not investigate patients with other tumors, the accuracy of this method for identifying HCC could not be determined. Also, fluorescence can only be seen from superficial lesions, so it may only be clinically useful in a few patients.

When performing resection of pulmonary metastasis of HCC, ICG fluorescence imaging is useful for identification of the tumor and for securing a sufficient margin when the lesion is located at a peripheral site in the lung and wedge resection is planned.

Ethical Statement: This study was approved by the Tokushima University Hospital Institutional Review Board (No. 3159). Patients were advised that their clinical data could be used for various studies and comprehensive informed consent was obtained on that basis.