Regional capnometry to evaluate the adequacy of tissue perfusion

In clinical practice, it is difficult to find relevant hemodynamic and oxygenation parameters that can serve as titration endpoints for hemodynamic interventions. In patients with shock or having undergone major surgery associated with high incidence of postoperative complications, the accepted goal for hemodynamic optimization is to increase O2 delivery (DO2) and thus O2 consumption (VO2) (1). However, recent studies have failed to confirm that hemodynamic optimization reduces morbidity and mortality (2-4). Even when macrocirculatory targets are met, microcirculatory disturbances can persist and lead to organ dysfunction (5). Hence, improved hemodynamic management might only be achieved by detecting VO2’s responsiveness to an increase in DO2 (i.e., in patients with anaerobic metabolism) (6). To date, several variables have been described as markers of tissue perfusion: oxygen venous saturation (SvO2) (7), the veno-arterial PCO2 gradient (PCO2 gap) (8), the arterial lactate level, and the ratio of the veno-arterial PCO2 gradient to the arteriovenous content difference in O2 (i.e., the PCO2 gap/DavO2 ratio) (9-12). Although these variables have been studied in intensive care units (ICUs) and operating theaters, they do have some limitations (described in other chapter of this publication). Moreover, these conventional variables are markers of systemic hypoperfusion, and so are not able to detect regional hypoperfusion (5).

In the 1990s, Nakagawa et al. and Tang et al. suggested that an increase in tissue PCO2 (“stagnant hypercapnia”) was a marker of inadequate tissue perfusion (13,14). Indeed, the difference between regional tissue PCO2 and PaCO2 (the tissue-arterial PCO2 gap) is an earlier, more accurate marker of regional tissue hypoperfusion than whole-body parameters are (15,16). This concept has been validated in many animal models and clinical studies (13,17-20). From a physiological point of view, an increase in tissue PCO2 results from two mechanisms that must both be present to produce “stagnant hypercapnia”. Firstly, an increase in tissue CO2 which can results of rises in aerobic metabolism with greater CO2 generation by the cells or results of tissue hypoxia with an increase in anaerobic glycolysis and excessive production of lactic acid (17). Secondly, the maintenance of blood flow easily removes CO2 into the venous circulation via the “washout phenomenon” (21). Thus, stagnant hypercapnia can occur only when blood flow is abnormally low. Thus, PCO2 gap increases as cardiac output falls in case of tissue hypoxia or without tissue hypoxia (22,23) (Figure 1).

Figure 1 Mechanisms of the CO2 stagnation in the tissues. [1] During tissue hypoxia, aerobic CO2 production (VCO2) falls as a result of a decrease in oxygen consumption (VO2). However, anaerobic glycolysis increases, leading to the excessive production of lactic acid and thus the generation of H+ ions. The latter are buffered by bicarbonates, and so anaerobic VCO2 increases in the cell. This results in a smaller reduction in total VCO2 than in VO2 and thus an increase in the respiratory quotient (RQ) (VCO2/VO2 ratio). [2] Tissue stagnation of CO2 can occur only when blood flow is abnormally low.

Hence, these findings suggest that the tissue-arterial PCO2 gap is a marker of tissue hypoperfusion in general, and not just in cases of hypoxia. The normal reference range for the tissue PCO2 gap is 8 to 10 mmHg (20,27).

The objectives of the present review were to describe the sites at which regional PCO2 and tissue-arterial PCO2 gap have been measured (gastric, sublingual, transcutaneous and bladder sites), assess this parameter’s prognostic value, and evaluate its utility in goal-directed therapy.

The tonometric measurement of regional CO2 pressures is based on equilibration of a gas’s partial pressure between two compartments separated by a semi-permeable membrane. Using air or saline as an equilibration medium enables the gas analyzer to automatically measure the PCO2 at a balloon located at the end of a gastric tube (Figure 2). The PCO2 in the collected air is measured using infrared spectrometry. The stomach is easy to access, and is known to be highly sensitive to tissue hypoperfusion (28). Furthermore, PgCO2 measurements have been used to detect early splanchnic ischemia (29). 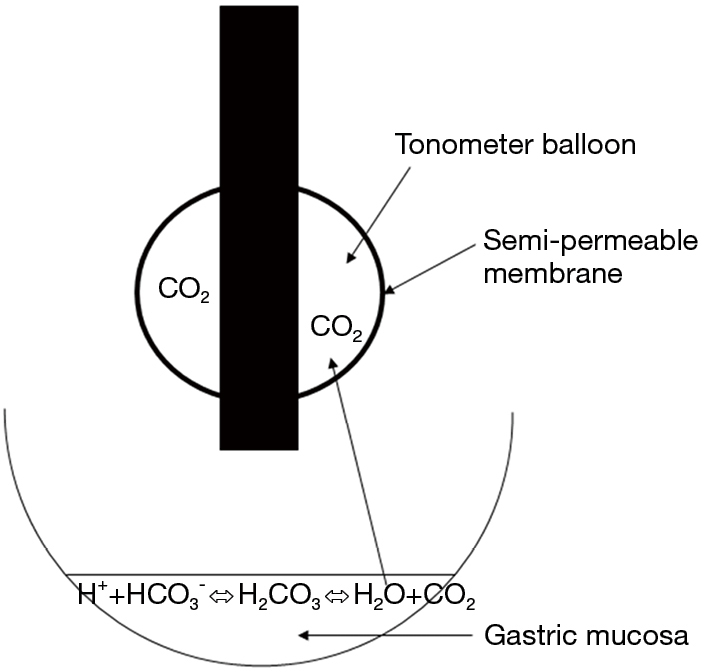 In the event of tissue hypoxia and low VO2, CO2 production by the gastric mucosa increases. Thus, it has been suggested that PgCO2 is a marker of tissue hypoxia (30) and can predict morbidity and mortality in critically ill patients (31). However, as mentioned in the introduction, the PgCO2 − PaCO2 gradient (PgCO2 gap) might be more valuable because it reflects the adequacy of gastric mucosal blood flow. In critically ill patients, the PgCO2 gap values measured on admission to the ICU and 24 h later constituted an independent prognostic factor for 28-day mortality, with a cut-off of >20 mmHg (16). In a perioperative setting, this index was predictive of postoperative complications (27,32).

When used as a prognostic tool in critically ill patients, the PgCO2 gap decreases upon fluid challenge. The change is related to the baseline PgCO2: PCO2 gap responders were defined by a decrease of more than 3 mmHg. Even more interestingly, whole-body indexes of oxygenation (SvO2, VO2 and PCO2 gap) remained unchanged after fluid challenge, when the PgCO2 gap decreased (33).

The main limitations of this method are the need for concomitant H2-blocker use and the discontinuation of enteral feeding (34). Moreover, this type of device has not been developed commercially, thus limiting its availability.

Esophageal tonometry has been proposed as a convenient alternative to gastric tonometry in animal models of shock (35,36). Good inter-variable correlations were found at this measurement site. However, this site is more difficult to access, which explains its scarce use in clinical practice.

The most intensively developed and well-studied sublingual CO2 sensor is the CapnoProbe® CO2-sensing optode (Nellcor, Pleasanton, CA, USA) (31,37-40). The optode contains a CO2-sensing fluorescent dye that is excited by light conducted through an optical fiber. The emitted fluorescence is then transmitted back to the instrument (Figure 3) (31).

Figure 3 Sublingual PCO2 measurement with the CapnoProbe®. The optode contains a CO2-sensing fluorescent dye that is excited by light conducted through an optical fiber. The emitted fluorescence is then transmitted back to the instrument.

Interest in the sublingual region has been stimulated by orthogonal polarization spectral imaging studies that have evidenced a decrease in sublingual capillary density in the event of septic shock (41,42). A study performed in the 1980s found that PslCO2 was elevated in a model of hemorrhagic shock (43). In animal studies of hemorrhagic and septic shock, sublingual CO2 measurements are well correlated with PgCO2 and whole-body markers of tissue hypoperfusion (13,43,44). The main advantages of this technique relate to its noninvasive nature, the absence of a requirement for withdrawing enteral feeding, and the correlation with the splanchnic region.

The basal value of PslCO2 was found to be predictive of mortality in acute circulatory failure and was associated with arterial lactate levels. When PslCO2 exceeded a threshold of 70 mmHg, its positive predictive value was excellent. Conversely, PslCO2 fell more quickly than arterial lactate during resuscitation (45).

However, the most interesting marker appears to be the PslCO2 − PaCO2 gradient (the PslCO2 gap). It is reportedly a better prognostic factor than whole-body markers (SvO2, cardiac index, DO2, and arterial lactate), and the best cut-off value was 25 mmHg (15). The PslCO2 gap may serve as an index of tissue dysoxia and the severity of tissue hypoperfusion in critically ill patients (38,39).

With regard to the PslCO2 gap’s potential as a treatment target (endpoint), it has been showed that the reperfusion of the damaged sublingual microcirculation (assessing using orthogonal polarization spectral imaging) was associated with the normalization of the PslCO2 gap during the resuscitation of patients with septic shock (37). However, the PslCO2 gap’s potential value as an endpoint during resuscitation has not yet been evaluated in critically ill patients. Although, this technique has been tested at the bedside, the CapnoProbe® is no longer commercially available.

Transcutaneous measurement of tissue CO2 is a simple, noninvasive technique. Interest in this method has been stimulated by studies of capnometry at the earlobe (46). The system includes a Severinghaus heated PCO2 electrode and a pulse oximetry sensor clipped to the earlobe (TOSCA® 500 monitor, Linde Medical Sensors, Basel, Switzerland). In a study of patients in the ICU, the transcutaneous PCO2 (PcCO2) was well correlated with PaCO2 (47-49). Other devices based on the same technology (SenTec AG, Basel, Switzerland) have yielded the same accuracy (50). However, a recent study found that measurement repeatability was poor (51).

Another study focused on the gradient between PcCO2 and PaCO2 (the PcCO2 gap) (52). The baseline PcCO2 gap levels were significantly higher in patients with septic shock, and the decrease after resuscitation was significantly greater in survivors than in non-survivors. Interestingly, survivors and non-survivors did not differ with regard to the change over time in whole-body parameters (cardiac output and ScVO2). A PcCO2 gap above 16 mmHg on day one was associated with a poor outcome. Interestingly, the variations in the PcCO2 gap during fluid challenge were inversely correlated with changes in microcirculatory skin blood flow.

Even though a large number of studies have investigated transcutaneous PCO2 in the field of neonatology, a Cochrane Collaboration review concluded that there was no evidence to recommend the use of transcutaneous CO2 monitoring in neonates (53).

In critically ill patients, the PcCO2 gap might be of value as an additional resuscitation endpoint when other parameters (e.g., arterial lactate and ScVO2) are in the normal range despite persistent tissue hypoperfusion (54). However, well-designed, adequately powered, randomized, controlled studies of the efficacy and safety of transcutaneous CO2 monitoring are now required.

The results of several animal studies have suggested that monitoring the intramucosal PCO2 in the bladder (PbCO2) may be a minimally invasive technique for monitoring perfusion (55-57). This technique measures PbCO2 via the gas analysis of saline samples collected from the balloon of a Foley catheter inserted into the bladder. The PbCO2 value is well correlated with DO2 and PgCO2 (55,56). However, these results were not confirmed by another group of researchers (57). Clinical studies of the accuracy of this device are required.

Conventional whole-body hemodynamic markers cannot always predict tissue hypoperfusion. By analogy with measurement of the whole-body PCO2 gap, the tissue PCO2 gap has been described as a marker of blood flow adequacy and can be used to detect tissue hypoperfusion. Monitoring PgCO2 gap has given good results, although several technical limitations and failure to develop this tool commercially has prevented the wider use of this technique. Further studies are needed to assess the efficacy and safety of PslCO2 gap and PcCO2 measurements. Although measurement in the bladder are promising, PbCO2 must be now studied in patients. Lastly, the blood flow distribution across the various organs cannot yet be assessed.