Lung cancer kills almost 160,000 people yearly and is responsible for more deaths than breast, colon, prostate and pancreas cancers combined (1). More than 80 percent of patients with lung cancer are diagnosed at an advanced stage (2). The National Lung Screening Trial (NLST), which randomized high-risk patients to receive or not to receive low-dose computed tomography (LDCT) screening, demonstrated a 20 percent reduction in mortality among patients who received LDCT screening (3). Notably, LDCT is the first cancer screening test found to reduce overall mortality, not just cancer-specific mortality. After the results of the NLST were released in 2011, the United States Preventive Services Task Force officially recommended yearly LDCT screening for patients aged 55–77 with at least a 30 pack-year history who had smoked within the last 15 years (4). Soon thereafter, lung screening programs were created at various institutions across the country (5,6). But there is growing concern that the implementation of these programs has not been widespread. Reports using the Behavioral Risk Factor Surveillance System (BRFSS) survey data estimated that fewer than 5% of eligible patients receive LDCT screening (7). Our goals were to determine the frequency and geographic variability of LDCT screening in the United States in an insured population.

After institutional review board approval was obtained from the Institutional Review Board Committee (IRB 17-109), a retrospective cohort study was performed using enrollment and claims data from Clinformatics Data Mart (CDM), one of the nation’s largest commercial health insurance databases with more than 18,000,000 enrollees (8). Data include the Member Eligibility Tables, which contains information on every member enrolled with the health plan during the specific period, and the Medical Claims Tables, which contains data for inpatient and outpatient professional services including outpatient surgery, laboratory, and radiology. The BRFSS data in 2016 was used to estimate the current smoking rate in each state. The University of Texas Medical Branch Institutional Review Board approved the research and waived informed consent.

We developed separate cohorts for 2016 and 2017. Each cohort included all beneficiaries aged 55–77 years on January 1 of that year, with complete insurance enrollment in that year. In analyses that included comorbidity we restricted the cohort to those with coverage for the prior year (n=2,809,801 for 2016 and 3,227,913 for 2017). The steps for the selection of the cohorts are outlined in the Figure S1. 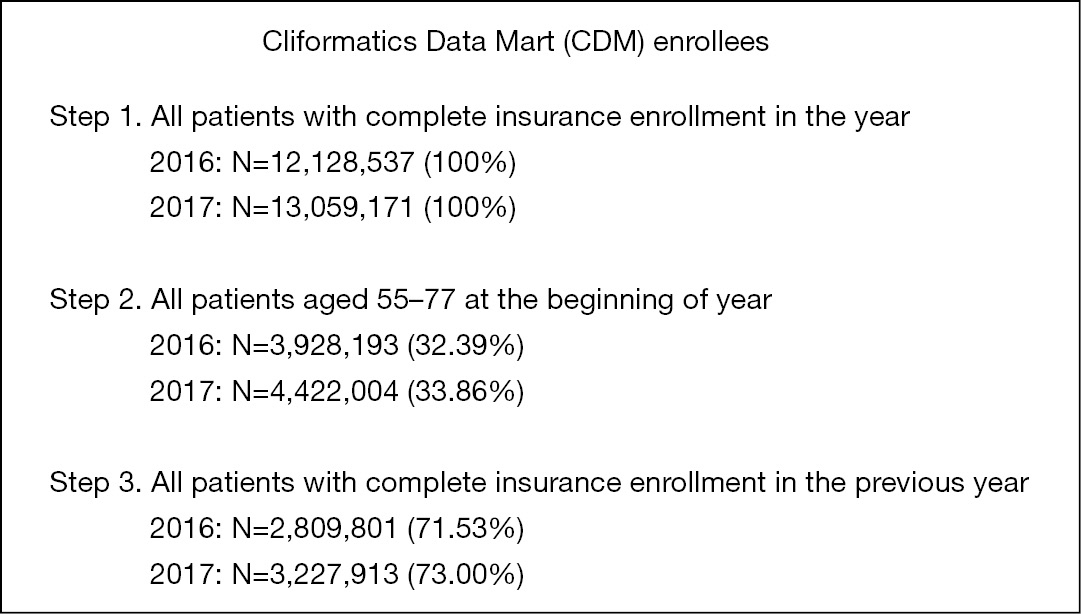 The primary outcome measured was whether a patient underwent a LDCT (CPT G0297 or S8032).

The proportions of beneficiaries receiving LDCT were calculated for each month from January 2015 to December 2017. We then analyzed the time trends in LDCT using joinpoint analysis with a non-linear model to identify change points and 95% confidence intervals, and also slopes between the change points (10). Statistical significance for the joinpoint model analysis was present (P<0.01).

For 2016 and 2017, we calculated the proportions of enrollees stratified by patient characteristics. We estimated the relative risk (RR) of undergoing LDCT using odds ratio from logistic regression (11). Because of the size of the cohorts, the 95% confidence intervals for estimates were small, and small differences were statistically significant. Our focus was more on clinical meaningful differences. The proportions of patients with a charge of LDCT for each state in 2017 were calculated to evaluate the state-level variation. The current daily smoking rate in each state was estimated by all patients aged 55–80 from BRFSS in 2016. The correlation between LDCT and current smoking rates was tested by Spearman rank correlation.

Table 1 shows characteristics of the enrollees, which differed slightly between 2016 and 2017. In 2017, 36.60% were under 65 years old and 53.84% were females; 25.03% were in a health maintenance organization (HMO), an organization in which enrollees pay a fee in return for a range of medical services from providers registered with the organization. Enrollees in 2017 had more comorbidities, a higher rate of prior tobacco diagnoses and more outpatient visits in the previous year. The South Atlantic region was overrepresented compared to the rest of the country. 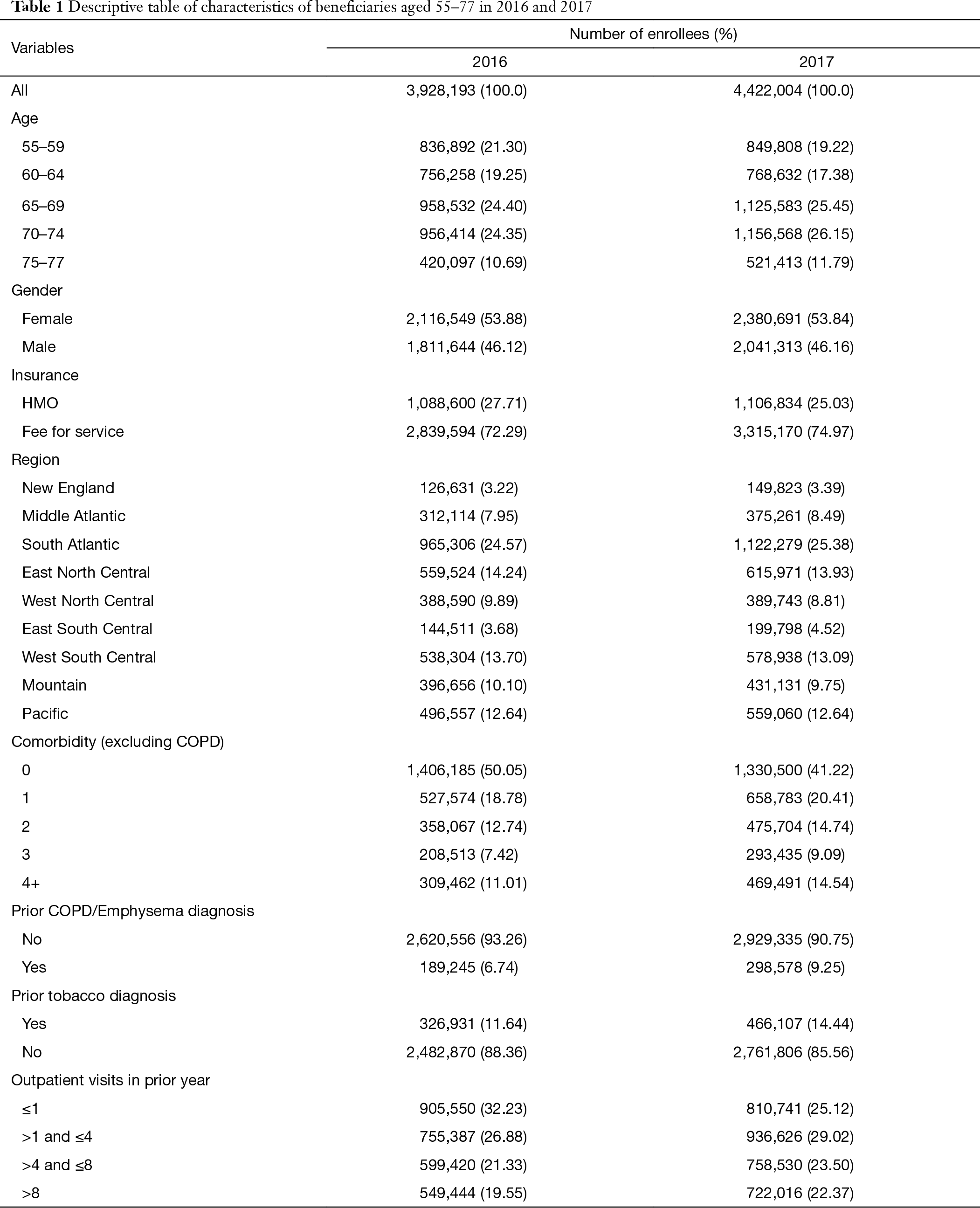 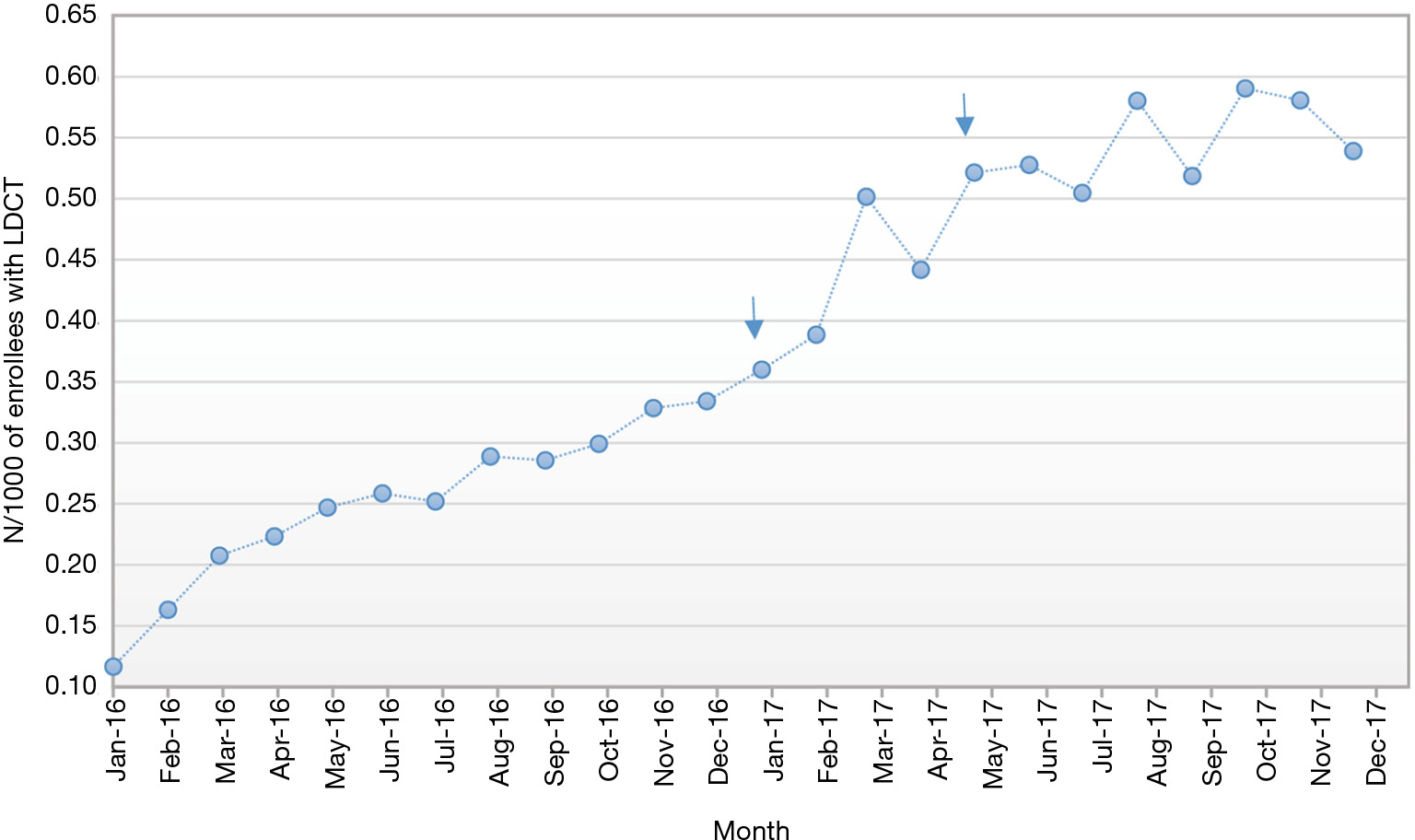 Table 2 shows factors associated with the rate of LDCT screening among enrollees. In the multivariable analyses, enrollees aged 60 to 69 had the highest rates, with those aged 55–59 and 75–77 with the lowest rates. Women had 15% lower odds of receiving LDCT (RR =0.85; 0.81–0.87). There was no difference by whether the enrollee had an HMO vs. fee for service plan, defined as a plan in which medical services which are provided are unbundled and reimbursed separately. Enrollees with 3 or 4+ comorbidities were less likely to receive LDCT. A prior diagnosis of COPD or a diagnosis of current or past tobacco use were both strongly associated with LDCT. 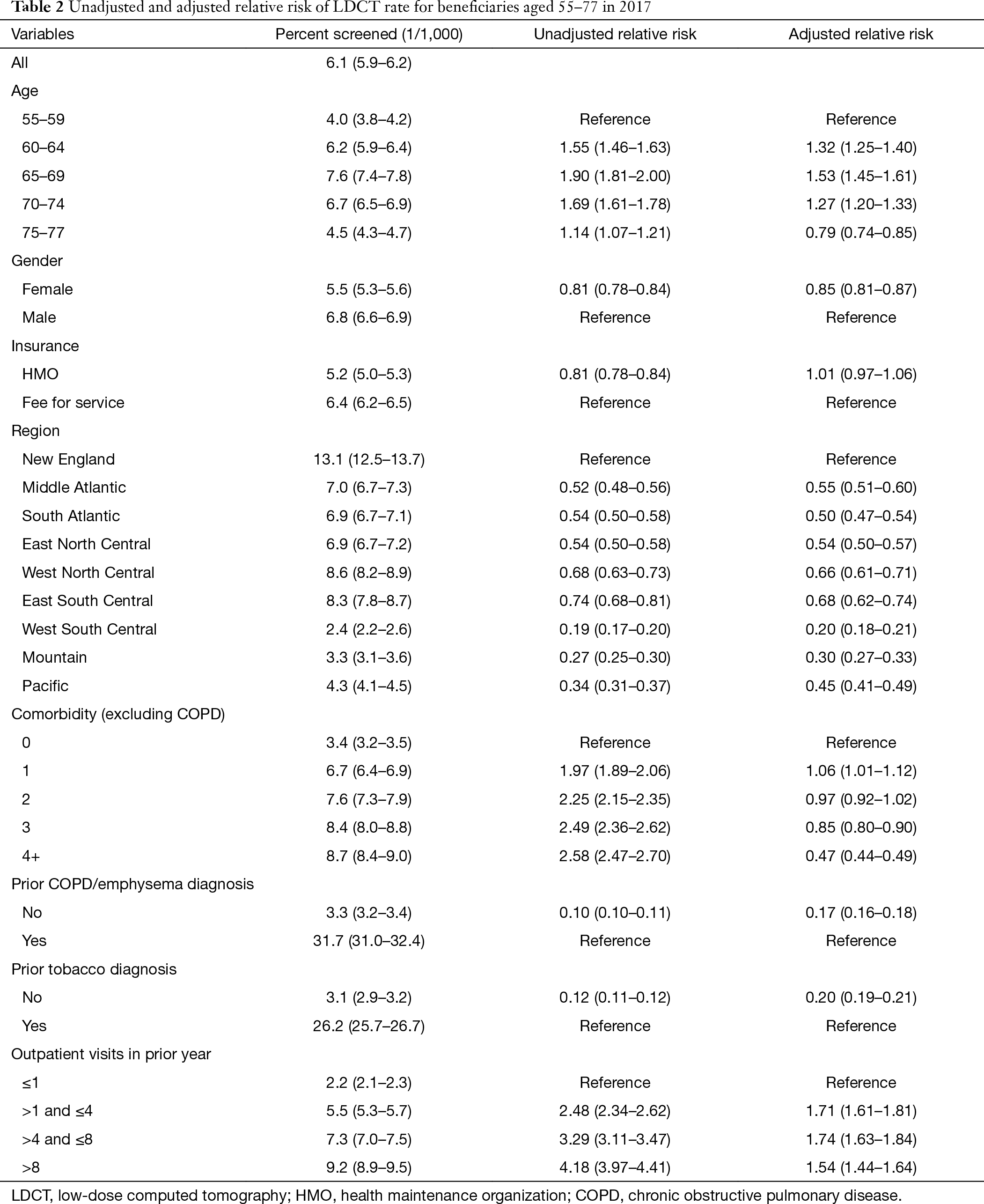 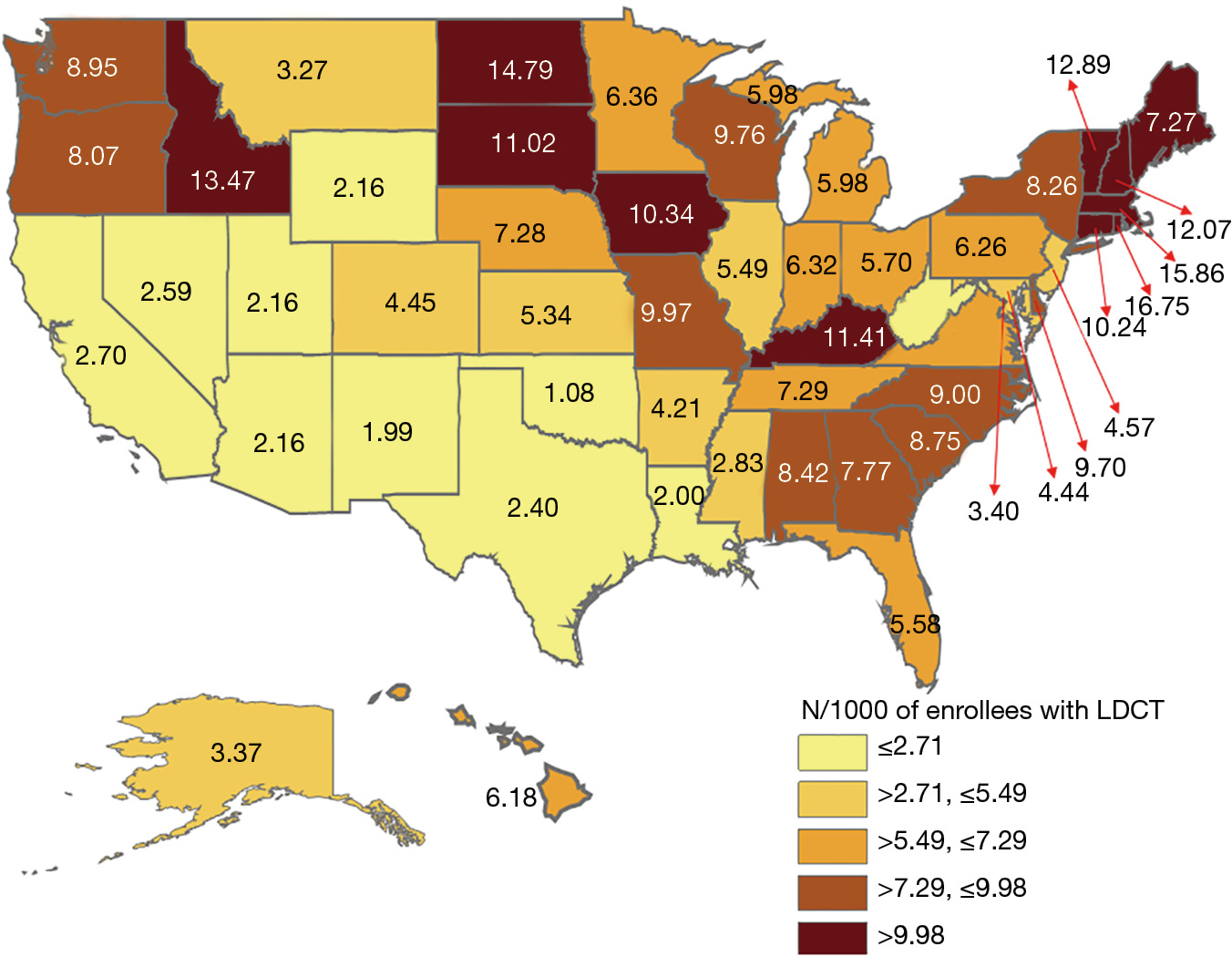 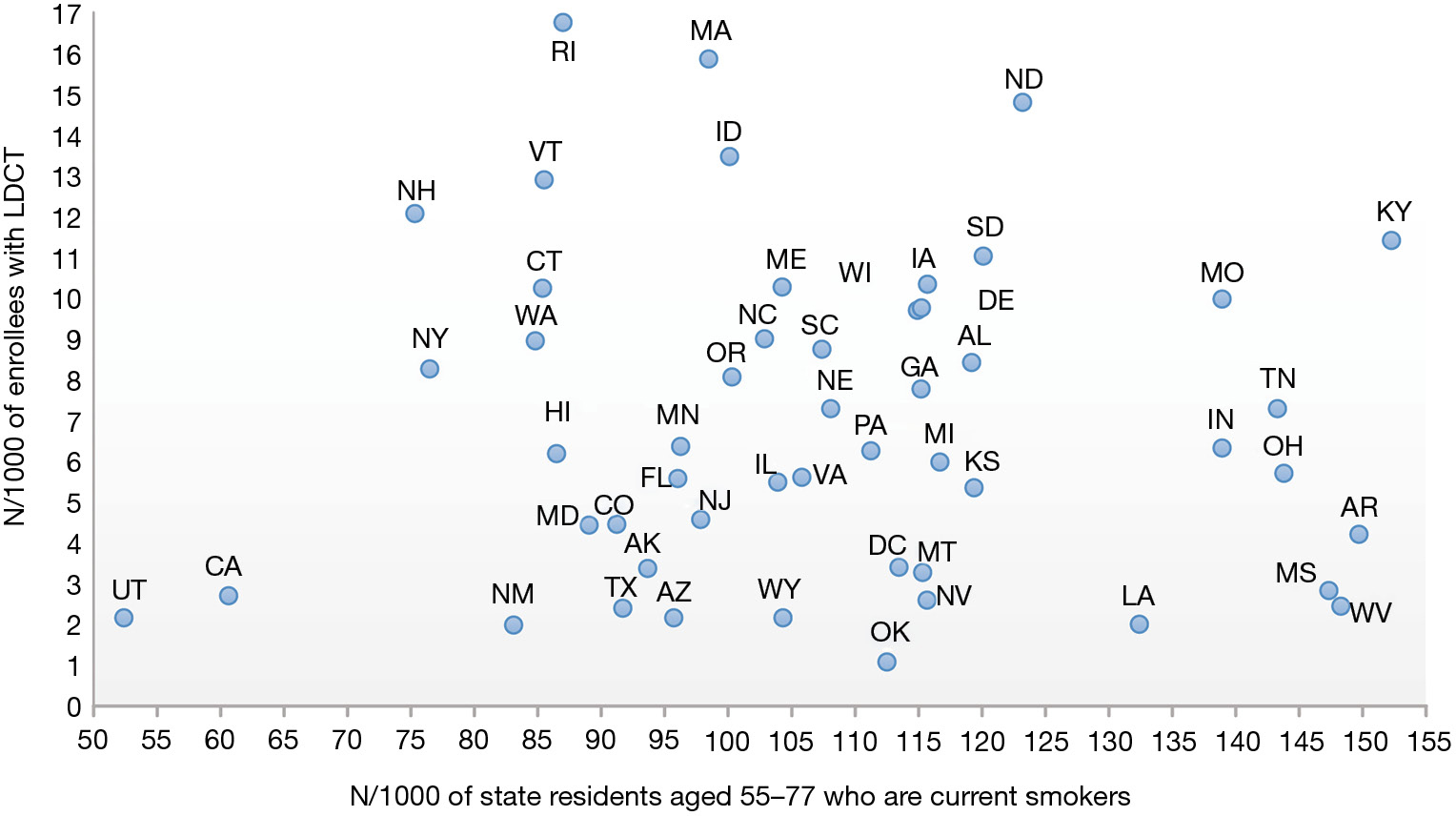 Figure 3 Scatter plot for number of enrollees aged 55–77, per thousand, undergoing LDCT screening in 2017 vs. number of current daily smokers per 1,000 among residents aged 55–79 in 2016. BRFSS data were used to estimate daily smoking rate. The correlation between the LDCT and smoking rates was r=0.02, P=0.87. LDCT, low-dose computed tomography.

Lung cancer has a poor overall prognosis, with a 5-year survival of only 18% (12). These poor outcomes occur largely because most diagnoses are made in advanced stages. LDCT screening combats this problem by diagnosing cancers at earlier stages. A lung cancer detected by LDCT screening will be discovered at an early stage 64% to 85% of the time (13,14). When comprehensive LDCT screening is implemented in a community, the rate of stage IV diagnoses for the entire community can drop below 15 percent (15). The benefits of LDCT screening have been demonstrated in numerous trials, but there has been difficulty in establishing effective programs which screen a high percentage of eligible patients (16).

To our knowledge, this current study is the first national study using health insurance claims data to estimate rates of LDCT screening. Prior reported rates of LDCT have utilized survey data, which depend on recall and also on a respondent distinguishing LDCT from other radiologic exams (17). Also, the number of subjects on whom there are data is much higher in claims data, allowing for more precise estimation of changes in LDCT rates over time and geographically.

To get an estimate of the percentage of eligible enrollees who underwent screening, we utilized a study from Jemal and Fedewa (18) which claimed that there were 8.4 million people eligible for LDCT screening in 2010. Using that statistic and United States Census data, 13.2% of adults aged 55 to 77 years nationwide are eligible for LDCT screening. If we accept that estimate and apply it to our data, then approximately 4.6% of eligible patients in our study received a LDCT. Other studies have shown similarly low rates of LDCT screening, and these low rates lag well behind screening rates for colon, prostate and breast cancer. While it might be expected that a new test would initially be underutilized and then gradually become more widespread, our data suggest very little increase in national LDCT rates after May of 2017.

The rate of LDCT screening in each state did not necessarily correlate with the rate of smoking. This was unexpected, because current daily smoking rates by state should correlate strongly with eligibility for LDCT screening. The New England states, which have relatively low rates of smoking, highlighted this discordance. One factor which may account for the high rate of screening in New England is the number of approved lung cancer registry sites by the American College of Radiology (ACR). New England is heavily concentrated with approved sites, compared to the rest of the country (7). Future studies could investigate other possible factors, such as the availability of primary care providers, academic medical centers, socioeconomic and racial/ethnic composition, and other elements which may influence LDCT screening rates.

Our study showed that the youngest and oldest groups of eligible patients—those aged 55–59 and 75–77—had the lowest rates of LDCT screening. It is possible that patients aged 55–59 have not accumulated enough smoking exposure to be eligible. But given that 90% of smokers begin by age 18 or younger (19), it is likely that there is a larger percentage of eligible patients in this range, compared to other ages, who are not being screened. One of the primary reasons for this trend may be a lack of awareness among people within this age group. Campaigns to increase awareness in younger patients should help to increase the percentage of patients overall who receive appropriate LDCT screening. Given that approximately 12,000 patients between the ages of 55 to 59 die each year from lung cancer (20), increasing screening in this age group could have a major impact in reducing overall lung cancer mortality.

We found no difference in LDCT screening rates by type of health plan, HMO vs. fee-for-service. Prior studies have found that patients in HMOs were more likely to receive recommended preventive medicine interventions (21). It may be that enrollees in HMOs have lower rates of eligibility for LDCT screening, which we cannot determine with our data.

There were some limitations to this study. The Clinformatics data do not include information on enrollee race/ethnicity. Certain regions such as the South Atlantic are over-represented in the data. The 55–64 age group selects for employed individuals and their families. A major limitation is the lack of information on eligibility for LDCT screening. The only information related to tobacco was the use of tobacco-related diagnoses in the prior year, such as “tobacco use disorder”. Such diagnoses are fairly specific in identifying tobacco use, but with low sensitivity (23). Also, there is no way to determine quantity or duration of smoking. Other criteria for LDCT, such as willingness to undergo surgery if a cancer is found, are also not available in these data.

Our review of enrollees aged 55–77 years in the CDM database revealed that the rate of LDCT screening is low, and is increasing only minimally over time. There are large geographic differences in screening rates which are independent of smoking exposure. The youngest enrollees are least likely to receive screening but may have the most potential to gain quality-adjusted life years. Patients who interact more with physicians are more likely to receive LDCT screening. The marked geographic variation provides an opportunity to study areas with high vs. low LDCT rates to determine factors associated with increased utilization.