The global burden of heart disease and unipolar depression is forecasted to exceed all other medical illness by year 2020 (1). The prevalence of depression in primary care settings has been shown to range between 5–10% in different countries, the prevalence of major depression is two-times higher in women than men and depression is associated with increased morbidity and mortality in the general population (2). Among patients with heart disease the prevalence of major depression has been reported to be between 15% and 40% (3,4). Depression can have profound effects on social functioning, quality of life, and physical health through associations with cardiovascular disease, the leading cause of preventable death worldwide. An association between depression and increased morbidity and mortality has been confirmed among patients going through cardiac surgery (5-8). Patients going through cardiac surgery have reported poorer health related quality of life than the general population (9,10). This is in line with what has been reported in other cardiovascular disease populations (11,12).

In a prior study, we investigated the feasibility of a depression screening program in cardiac surgery patients and found a satisfactory response-rate in elective patients (18). The aim of the present study was to investigate longitudinal changes in depression screening results up to one year following surgery, and to evaluate the results separately for men and women.

This was a prospective population-based study. We introduced a depression screening project at the cardiac surgery department at Karolinska University Hospital between 2013 and 2016. The project was approved by the human research ethics committee in Stockholm (Dnr: 2013/35-31/4). All participants gave informed consent before entering the study. The Swedish version of PHQ-9 was used. The PHQ-9 is a validated depression screening instrument in patients with heart disease and recommended by the American Heart Association (19). Patients scheduled for elective surgery received the PHQ-9 by mail about 2 weeks before surgery. Urgent patients were asked, if possible, to fill out the PHQ-9 prior to surgery on the ward as part of the standard clinical routine. Baseline characteristics, medical history, and medications were gathered from patient charts, and registered in a study database with the results from the PHQ-9 questionnaires. One year after the surgical procedure all patients who had filled out PHQ-9 at baseline were sent the PHQ-9 with a letter asking to fill out the questionnaire again and send it back with the enclosed prepaid envelope.

All patients above 18 years of age planned for heart surgery at Karolinska University Hospital were eligible for inclusion in the study.

The PHQ-9 includes the 9 criteria upon which the diagnosis of DSM-IV depressive disorders is based, and is a 9-item self-report questionnaire that assesses symptoms of depression. The 9 items of PHQ-9 can be scored from 0 (not at all) to 3 (nearly every day) per separate item, and overall scores can range from 0 to 27. A score ≥10 is considered predictive for an episode of major depression with a sensitivity and specificity of 88% (19). The 9 items ranges from item 1: “Little interest or pleasure in doing things?” to item 9 that identifies suicidal ideation and states: “Over the last 2 weeks, how often have you been bothered by the following problem: thoughts that you would be better off dead, or of hurting yourself in some way?”. Answer choices and scores are as follows: “not at all” (score 0), “several days” (score 1), “more than half the days” (score 2), or “nearly every day” (score 3). The PHQ-9 questionnaire is filled out by the patient and only takes a few minutes.

During the period 2013–2016, 2,512 patients underwent cardiac surgery; 1,133 (45%) completed PHQ-9 before surgery and were included in the study. Among patients scheduled for elective surgery 990/1,544 (64%) completed the PHQ-9 questionnaire at baseline, and among urgent patients the response rate was 143/968 (15%). Fifteen percent (166/1,133) had a PHQ-9 score ≥10 suggestive of major depression at baseline. Reporting elevated depression scores were twice as common in women as in men 23% vs. 12% at baseline. One year after surgery, 1,084 patients were alive, of these 897 (83%) persons filled out PHQ-9 again. Our final cohort consisted of 897 patients with a completed PHQ-9 at baseline and after one year (Figure 1). The total mean age was 65.73 years, including 656 men (73%) and 241 women (27%) (Table 1). Patients that remained screening positive from baseline to follow-up after one year were younger and more often active smokers compared with patients that were screening negative at baseline or at follow up. This was also noted among patients with at least one positive depression screen at any time during the study (Table 1). 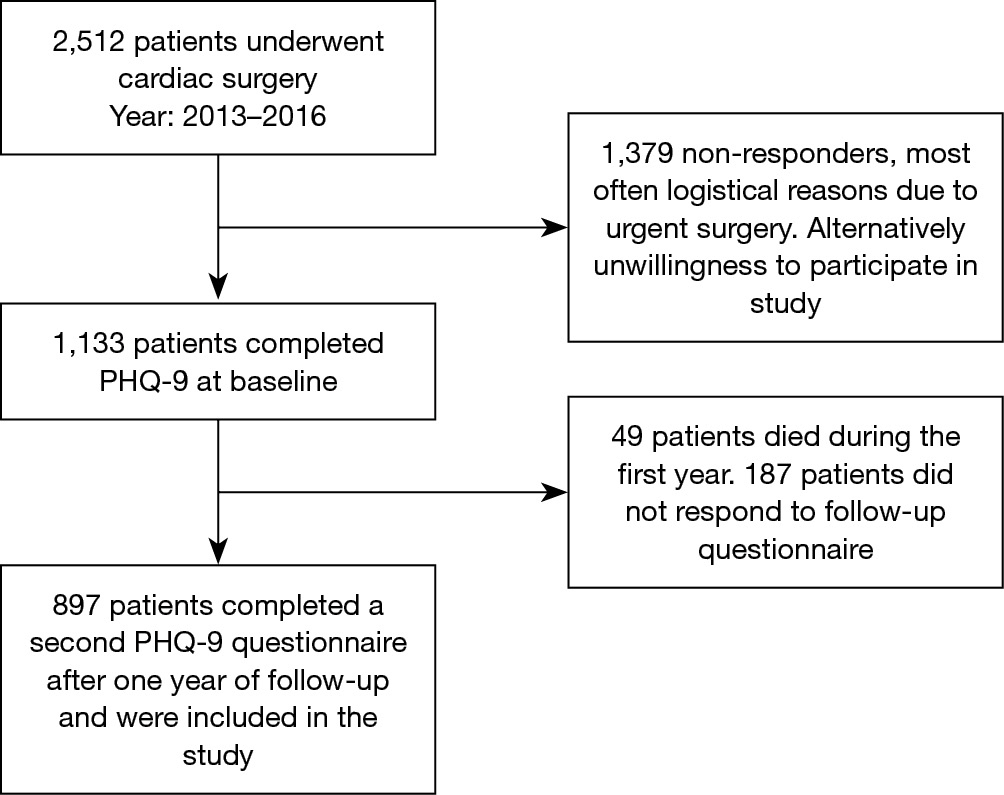 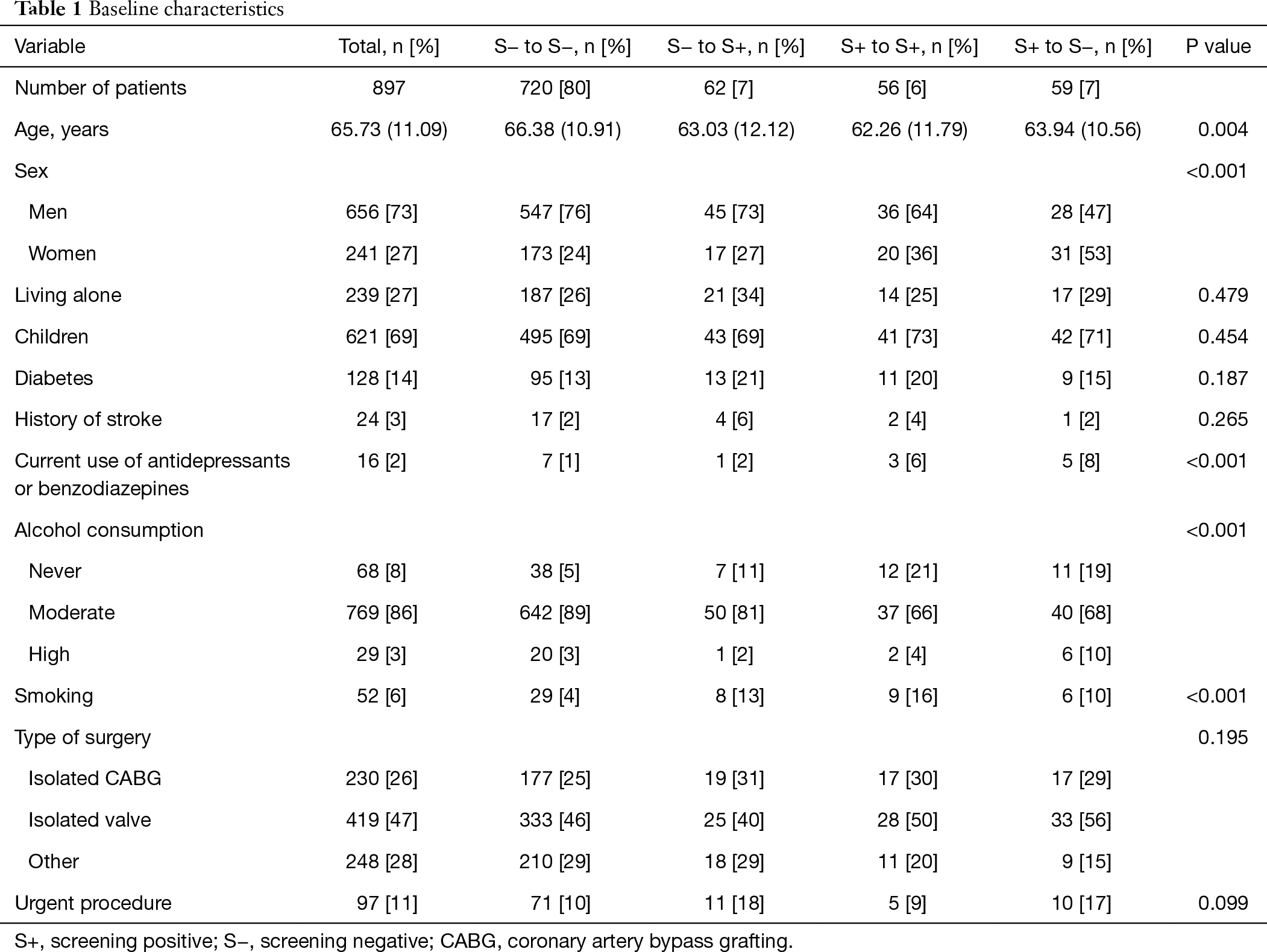 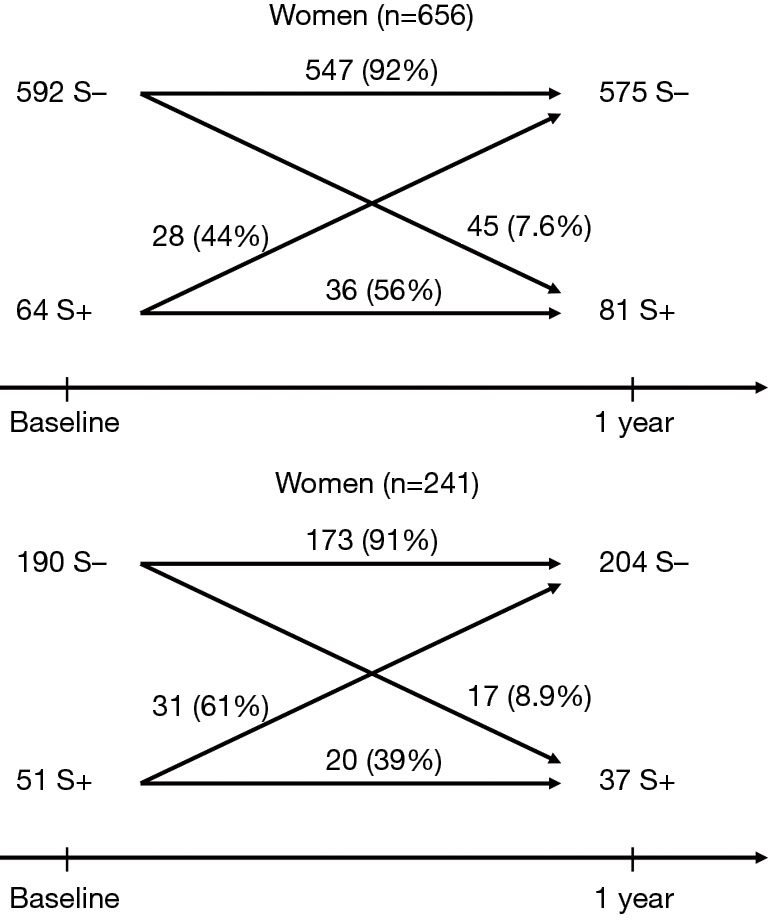 Figure 2 Changes in screening status from baseline to 1 year follow-up in men and women. 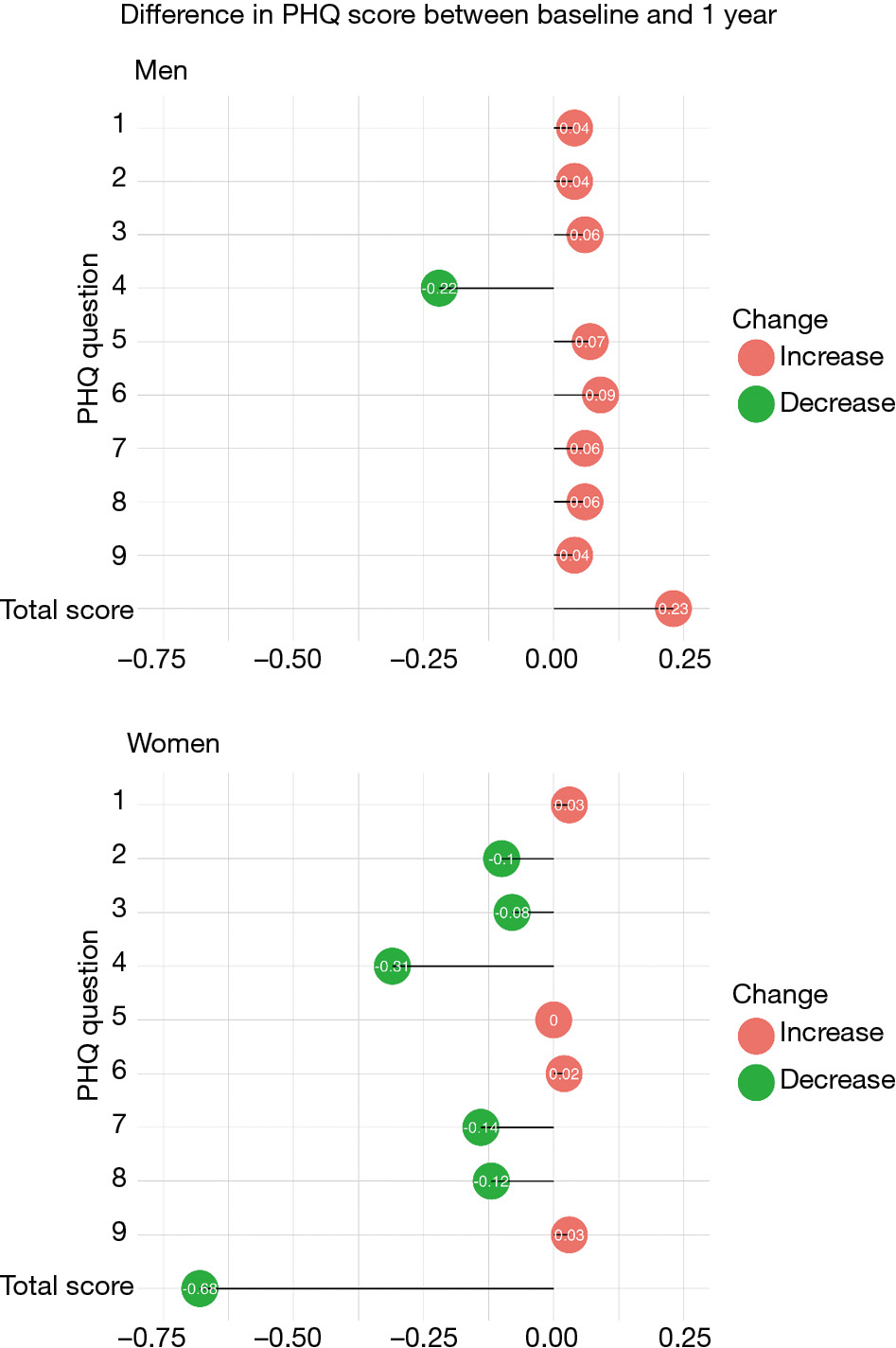 In a longitudinal study by Tully et al., PHQ was administered 30 days after cardiac surgery and was re-administered after six-month follow-up (10). They found that approximately 10% had a positive depression screen at baseline and at 6 months follow-up and that patients with a positive depression screen was at a higher risk of major adverse cardiac events and reported significantly poorer quality of life (10). The proportion of patients who were screening positive at baseline and after one year of follow-up in our study was similar to what was reported by Tully et al. (10).

A recent longitudinal study investigated the impact of elevated depression scores on HADS preoperatively and one year after coronary artery bypass grafting (CABG) on all-cause mortality after 11 years. Like in our study the proportion of patients with elevated depression and anxiety scores was greater among women. The researchers found in their analysis by sex that both men and women that symptoms of depression were associated with increased mortality but results from the sex-specific analyses showed no evidence of sex-disparities (20).

In our study we found that women improved in depression scores to a larger extent than men. The gender difference in depressive disorder is a complex integration of biology, society and culture (23). One possible explanation to our findings, that more women than men with depressive symptoms at baseline seem to improve over a 12 months period, could be that it is more socially acceptable for women to seek medical help. Traditional depressive symptoms (e.g., sadness, crying) may not be in line with societal ideals of masculinity. Therefore, men might be reluctant to report experiencing these symptoms and seek help (13). It could also be that depression takes different shapes in men and women. Anger, irritability, risk-taking behaviors, and substance abuse can be symptoms of depression in men replacing more traditional symptoms such as sleep problems and withdrawal from social occasions (13).

Palacios et al. investigated the long-term trajectories of anxiety and depression in a cohort of 803 patients with coronary heart disease (24). The patients were assessed every 6 months for 3 years. Despite consistent reporting of high depression and anxiety symptoms, only approximately half of the patients had these symptoms mentioned in their medical notes (24). This suggests that it is difficult to identify mental comorbidity in patients with cardiac disease and repeated depression screening could be helpful.

A strength of our study includes the prospective population-based design. All patients received standard of care but we lack information regarding possible depression treatment during follow-up. Other limitations included the lack of a clinical examination by a psychiatrist and that we did not record postoperative complications in the study.

We found that twice as many women as men had a positive depression screen at baseline, and that almost 10% of all who were screening negative at baseline, were screening positive after one year. Women who screened positive at baseline were to a larger extent than men screening negative after one year, and women decreased in PHQ-9 scores, whereas men tended to increase their scores. Our results indicate that repeated screening is probably of value in both men and women in order to detect symptoms of depression because if depression is detected, it is more likely to be treated.

Ethical Statement: The study was approved by the human research ethics committee in Stockholm (Dnr: 2013/35-31/4) and written informed consent was obtained from all patients.