The presence of blood flow between the aorta and atrium is a rare but complex pathological condition, also known as aorto-atrial fistula (AAF). Systemic symptoms such as heart failure, weakness and oedema may occur as well as more local symptoms including dyspnoea, chest pain, palpitations, and fatigue or coughing.

The exact incidence of AAF is currently unknown and there are many gaps in our knowledge regarding various aspects of AAF, such as diagnosis strategies and management options. The aim of the present study was to systematically review the available case report literature reporting AAF. These data will provide an overview of the demographic characteristics of AAF, the pre-operative imaging techniques used to diagnose AAF, the anatomy and causes of AAF and finally give some information on the therapeutic options for AAF and the respective outcomes. These data should enable surgeons to prevent this condition occurring initially, as well as treating it optimally when it does occur.

We systematically reviewed literature on AAF formation and closure. Separate Medline (PubMed), EMBASE, and Cochrane database queries were performed. The following MESH headings were used: atrium, ventricle, fistula, cardiac, shunts, aortic, aorto-atrial tunnels and coronary cameral fistula. All papers were considered for analysis irrespective of their quality, or the journal in which they were published. Strict criteria and screening of titles and abstracts were used to select relevant papers. All papers and reports on AAF formation and closure were included. Reports not written in English were excluded, as well as reports without a clear description of AAF or AAF closure. No randomized controlled trials or clinical studies were identified. We evaluated the remaining case reports. We identified 132 case reports with a total of 136 patients for our analysis (Figure 1). In each of these reports we extracted the following information: year of publication, number of patients, age, sex, previous cardiac surgery, time between surgery and AAF formation, fistula tract, presumed AAF cause, surgical technique for AAF closure, follow-up and outcome (Table 1). 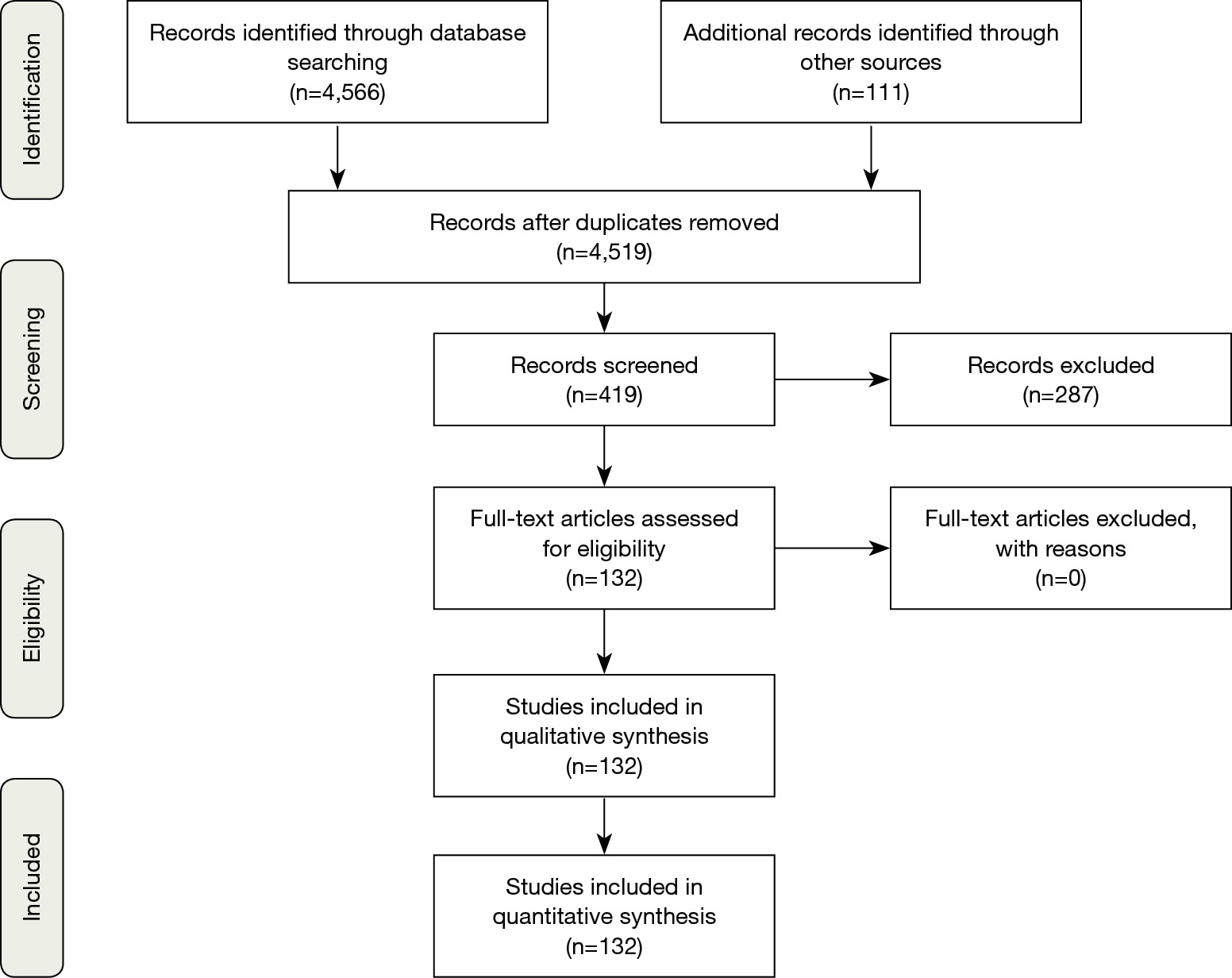 7% of the studied articles were published in the period from 1960 till 1980. Around 70% of the articles were published after 2000 whilst approximately 35% were published after 2010 (Figure 2A). Most case reports on AAF were from the United States of America (39 cases) followed by the United Kingdom (12 cases). Most Asian publications stemmed from India (11 cases), Japan (12 cases) and Turkey (12 cases). From the 136 cases analysed the occurrence of AAF had a male to female ratio of approximately 2:1. The age of the patients in the case reports described ranged between 5 days and 85 years old (median 51 years, average 46 years) (Figure 2B). 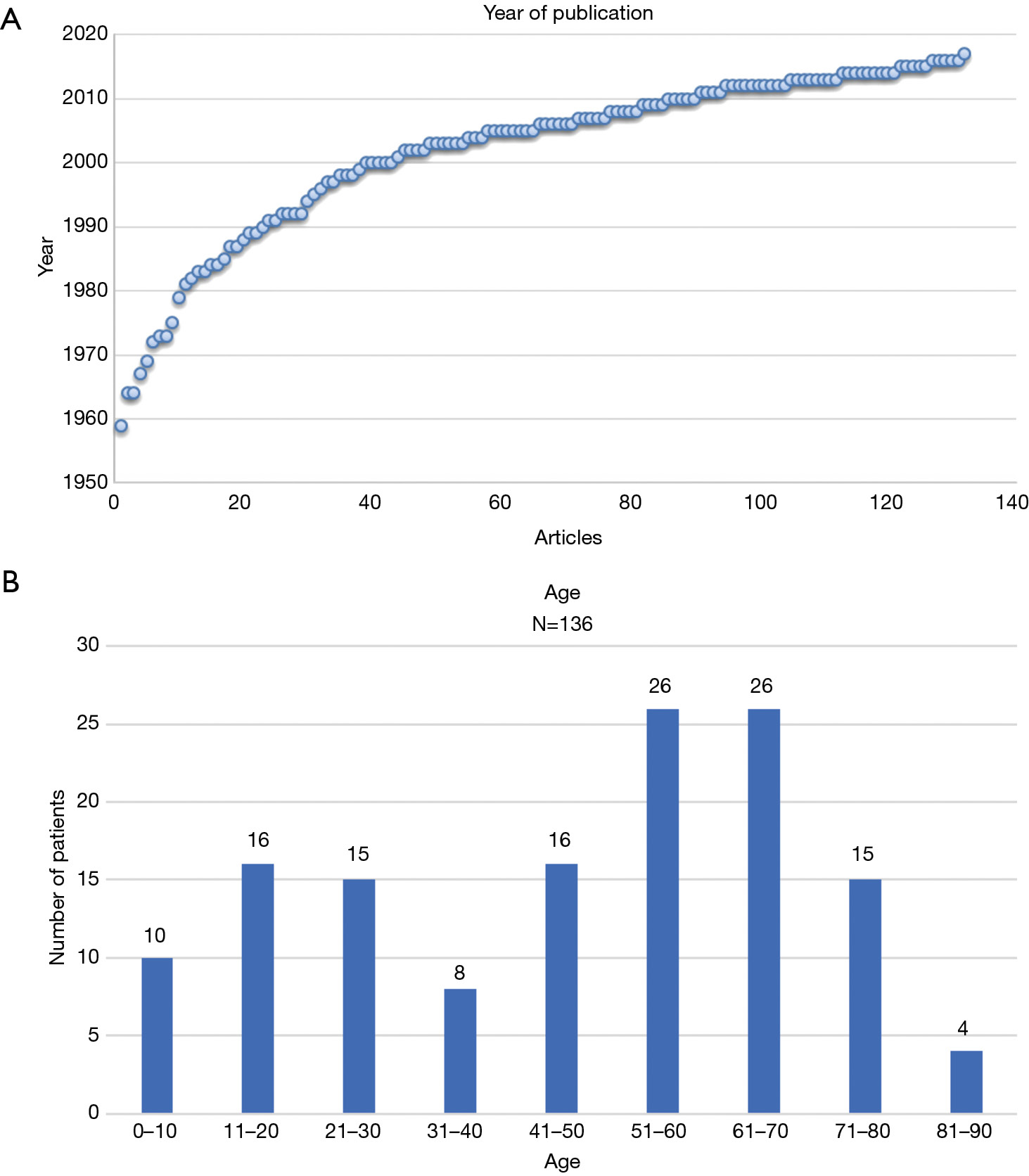 Figure 2 Demographics of Patient Population with AAF. (A) Number of articles published about AAF in time; (B) occurrence of AAF per age group. AAF, aorto-atrial fistula.

In 130 out of the 136 cases information was provided regarding use of preoperative imaging techniques. In the majority of the cases where imaging was utilised, echocardiography (83.1%) and angiography (59.6%) were favoured (Tables 2 and 3). Out of the 113 reported cases where echocardiography was used, the use of transthoracic (23.9%) as well as transesophageal (24.8%) or the combination of both (23.0%) seemed to be equally distributed, whilst in 28.3% of cases the technique the authors had used was not specified (Table 3). 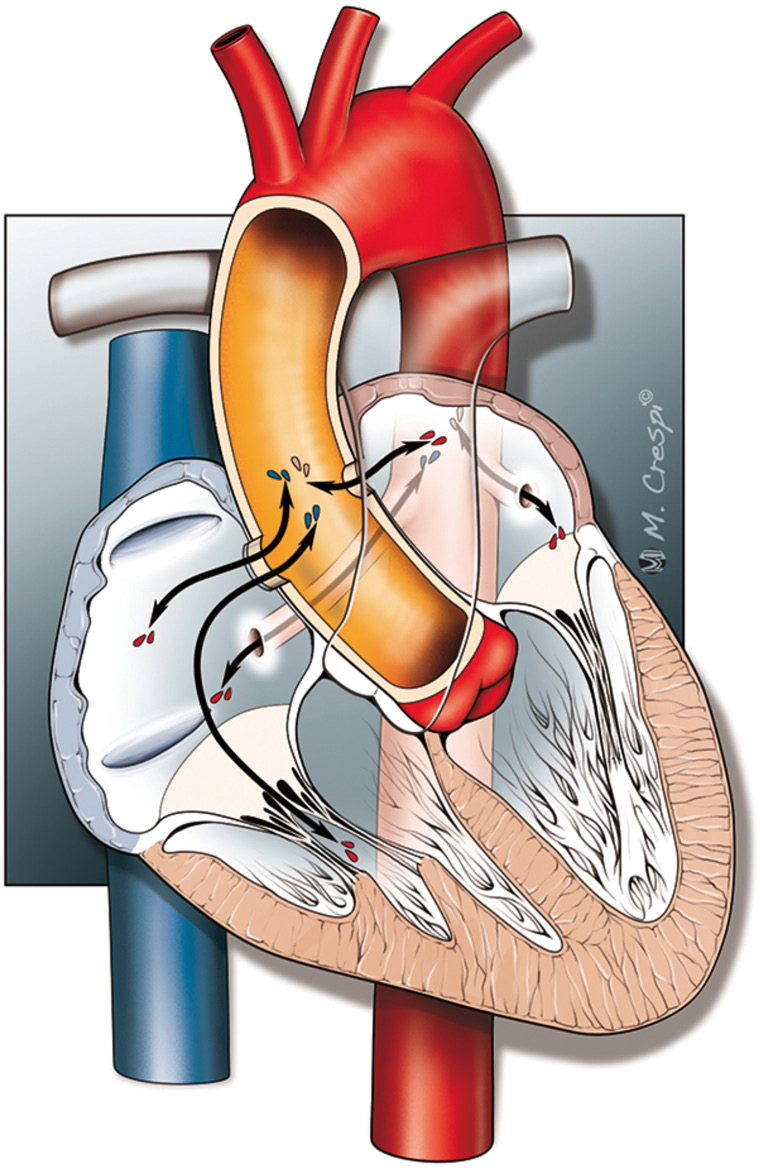 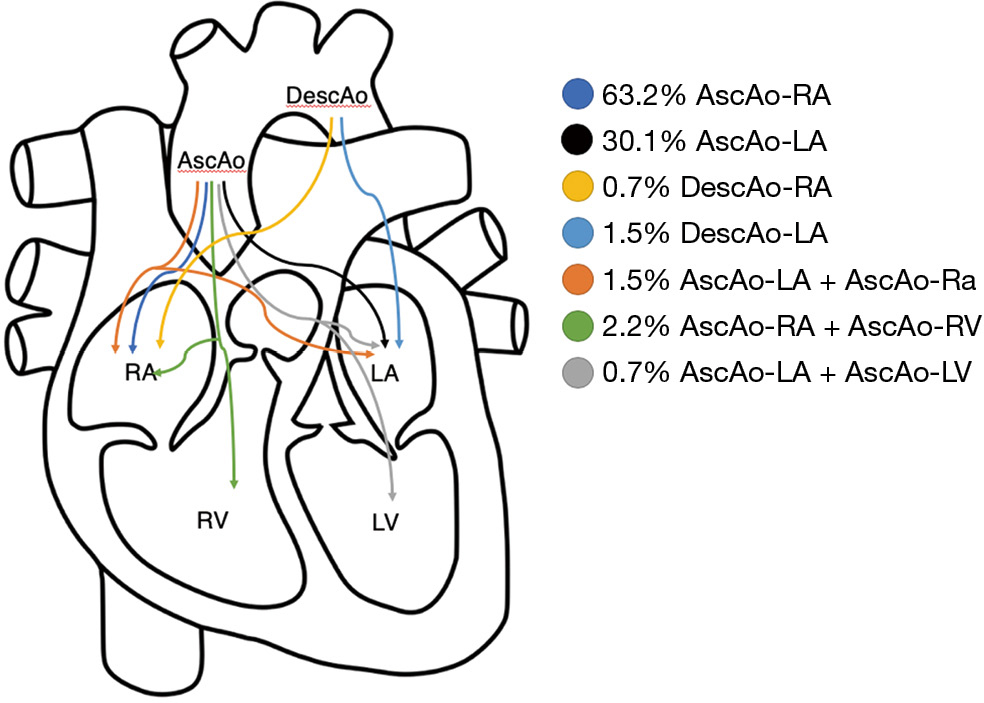 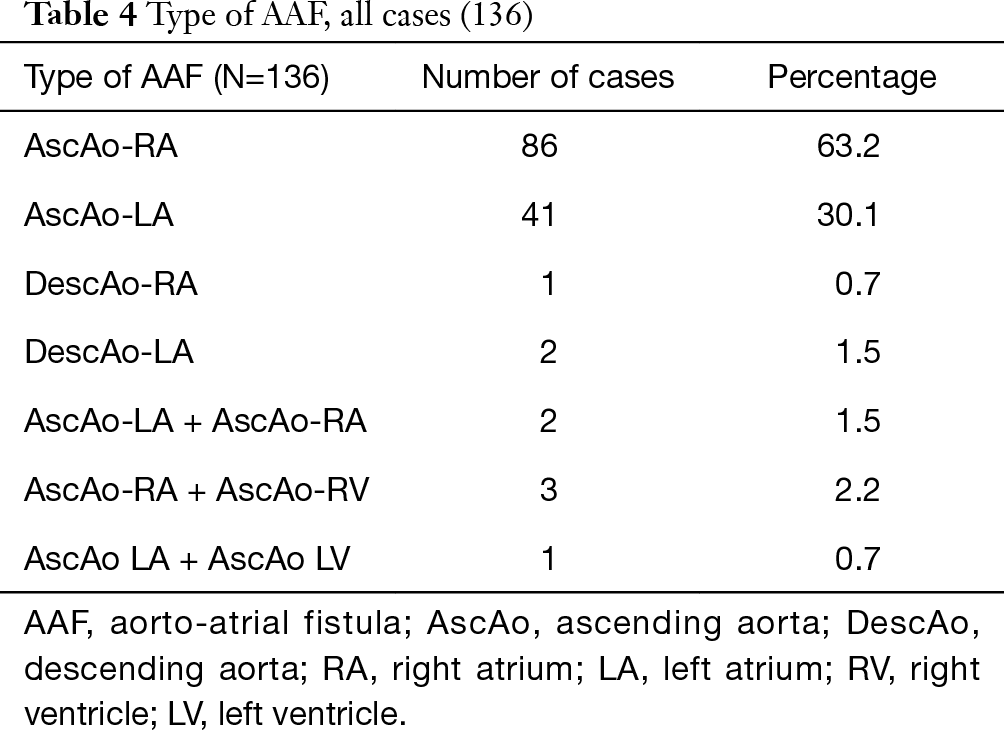 In the majority of cases (22.8%) endocarditis was the cause of AAF formation. In 71% of these cases, a paravalvular abscess was also present. Furthermore, 45.2% of these patients had prior surgery with a prosthetic valve. Aortic aneurysms (22.1%), mainly complicated with dissected aortic walls, were the 2nd most common cause. Congenital causes (11.8%) were also responsible for a number of AAFs. In this group 81.2% of the fistula tracts were from the aorta to the right atrium whilst only 18.8% led into the left atrium. Interestingly, chest traumas were a relatively rare cause of AAF, with this being the cause in just 3.7% of all cases reported. 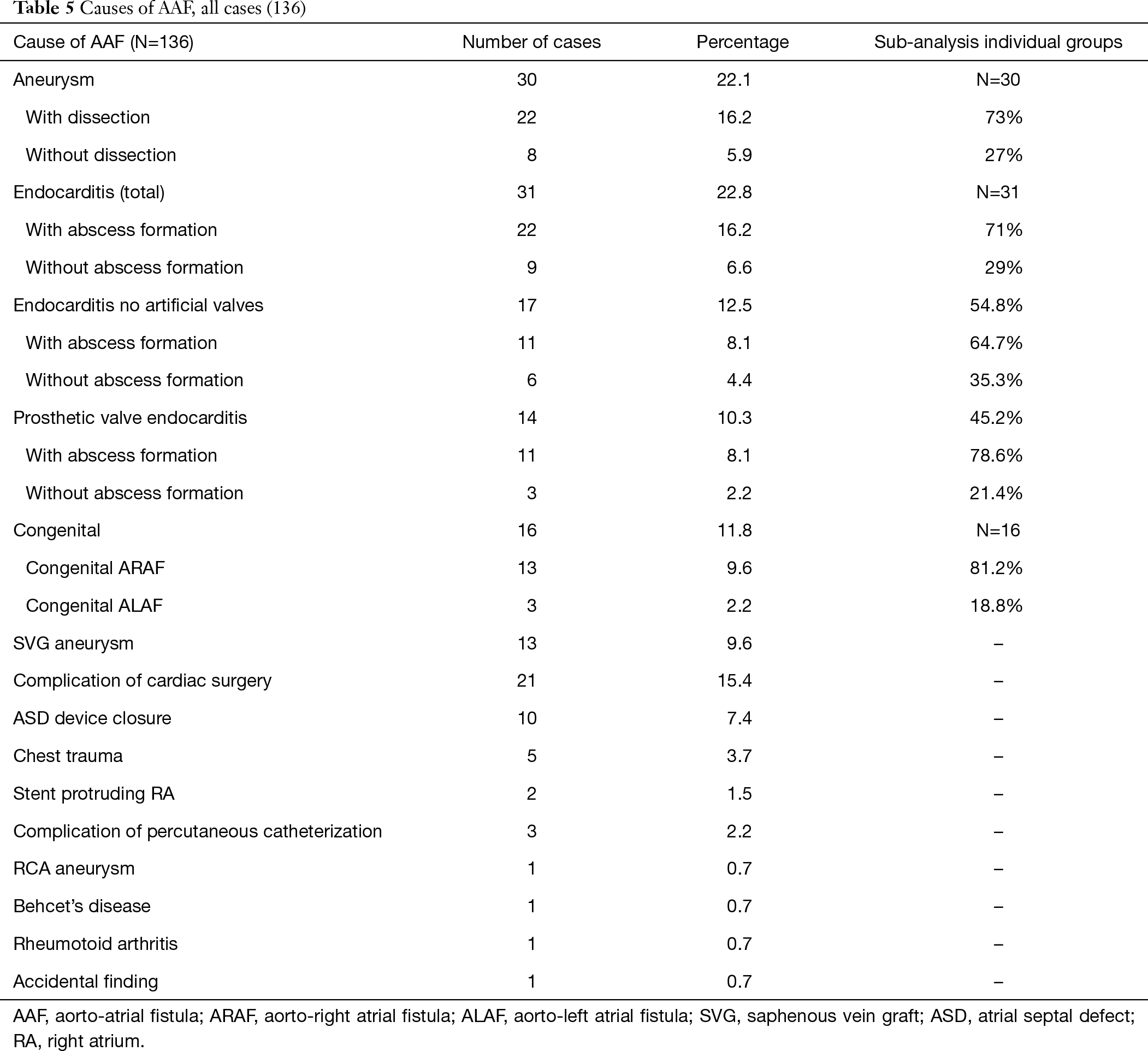 As shown in Table 6, AAF was corrected via an open surgical approach in 73.5% of all cases. In 10.3% the fistula was closed via a percutaneous intervention, whilst in 4.4% of cases a conservative medical approach was advocated (e.g., diuretics and blood transfusions), due to the high surgical risk. In one case the patient was scheduled for surgical closure of the fistula, but echocardiography showed a spontaneous closure. In 3.6% of cases the patient refused corrective surgery and in 5.1% of all cases the patient died before surgery could go ahead. In 1.5% of all cases with AAF there was no procedure or medical intervention performed, either due to a very high operational risk or due to the fact that the fistula had no hemodynamic effects. In 0.7% of the cases the treatment of the AAF was not described. In 42% of the cases where a surgical approach was utilized, the fistula was closed with sutures. In 20% of the cases it was opted to close the fistula with a patch, whilst in 4% the tract was ligated. A combined approach of suturing and the use of patches occurred in 5% of cases. The closing technique during corrective surgery was not described in 29% of cases (Table 6). When percutaneous closure of the fistula tract was employed, closure with an Amplatzer device was the treatment of choice (71.4%), followed by coil embolization (14.3%), covered stents (7.15%) and finally balloon closures (7.15%) (Table 6). 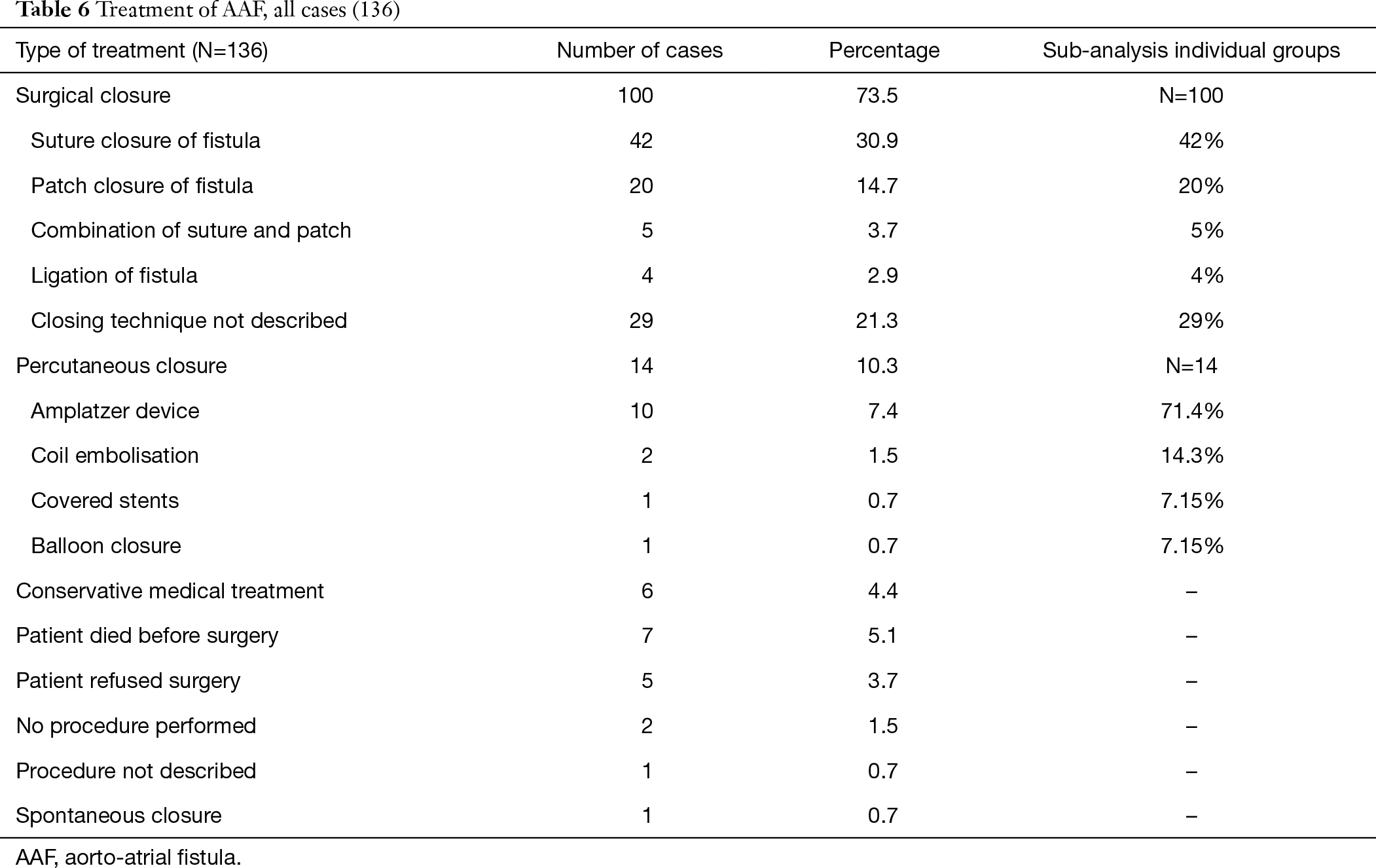 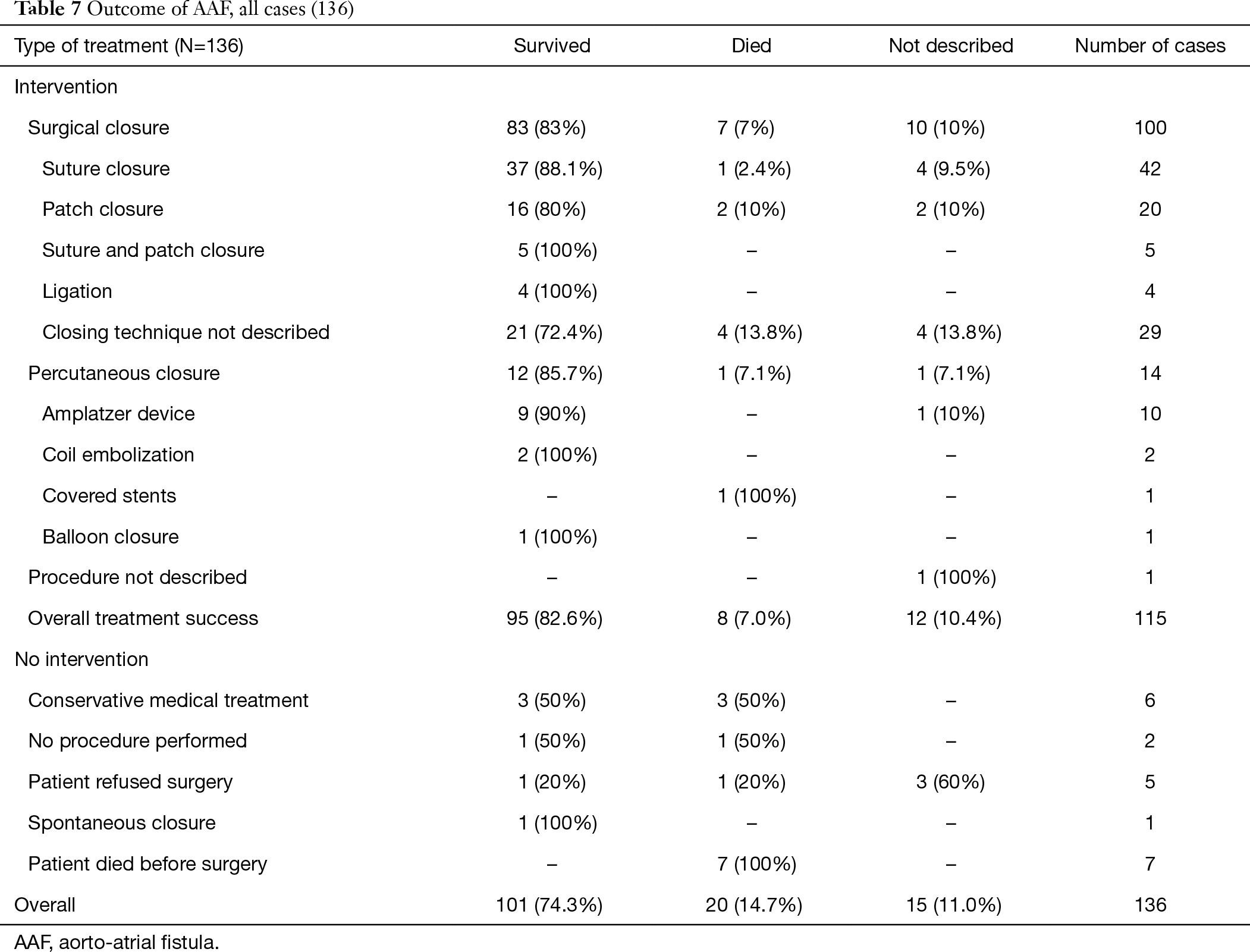 We systematically reviewed the literature for reports on AAF. We did not identify any reports on systematic registries or clinical trials investigating AAF. All our knowledge on AFF is therefore currently based on case-reports. Based on the reported case reports, we conclude that:

The surgical approach to close the fistula often entails suturing or the use of a patch. Percutaneous closure of AAF has been employed more often in the last few years. There are no specific devices for transcatheter closure of fistulas, but devices like the Amplatzer Septal Occluder, used for closing atrial septal defects, have proven their applicability for this purpose. Overall treatment success rates are at least 70% with a mortality rate of around 15%.

There are a number of limitations to our study, with the major limitation being that reported data came from case reports or case series. For these reasons, it is likely that there is some publication bias as it is highly likely that not all cases have been published. Furthermore, cases of patients who were unsuccessfully treated are less likely to be reported. Data from larger populations is lacking, meaning that specific data regarding incidence and prevalence does currently not exist. This review provides us with a number of insights into the occurrence and pathophysiology of AAF, as well as the current treatment options for this rare, but potentially life threatening, condition.