Brain metastases are a major cause of mortality in patients with small cell lung cancer (SCLC). Even in the best of circumstances, patients who initially respond to chemotherapy have a 50% chance of developing brain metastases within 2 years (1). Consequently, prophylactic cranial irradiation (PCI) has become an important adjuvant therapy to be considered for SCLC patients (2,3).

Over 85% of patients with SCLC present with clinical evidence of locoregional or metastatic disease. As a result, the primary management of SCLC is often limited to systemic chemotherapy for these advanced stage patients (4). In cases of limited stage SCLC, surgical resection followed by systemic therapy is also a reasonable treatment pathway and is supported by current NCCN guidelines (5). These recommendations additionally extend to surgically managed patients with clinical evidence of non-SCLC and incidental SCLC on pathologic review. While multiple meta analyses and systematic reviews have defined a limited role for PCI in the adjuvant setting to improve outcomes in locoregional or metastatic SCLC (2,3,6,7), much less is known about the outcomes of PCI in patients with limited stage, surgically resected disease (8).

The National Cancer Database (NCDB) captures approximately 70% of new cancer cases in the United States (9) and is an important nationally representative sample from which to evaluate the outcomes associated with SCLC. Therefore, we used the NCDB to determine if patients with surgically resected early-stage SCLC benefit from PCI in additional to standard of care adjuvant chemotherapy.

The 2015 participant user file of the NCDB was used for this analysis. The NCDB is a hospital-based tumor registry, run by the Commission on Cancer of the American College of Surgeons and the American Cancer Society, which captures approximately 70% of all newly diagnosed lung cancer cases in the United States, and contains detailed information on patient demographics, tumor staging, treatment, and survival (9). According to the NCDB, “the data used in the study are derived from a de-identified NCDB file. The American College of Surgeons and the Commission on Cancer have not verified and are not responsible for the analytic or statistical methodology employed, or the conclusions drawn from these data by the investigator” (10). This study was approved by the Yale Institutional Review Board with patient consent waived (Protocol #1103008160: Clinical and Molecular Predictors of Survival in Thoracic Malignancies).

All patients who underwent definitive surgery (segmentectomy, lobectomy, pneumonectomy, bronchial sleeve) for primary SCLC between 2004 and 2015 were identified. We excluded patients aged less than 20 at the time of diagnosis, those with evidence of distant metastases, incomplete resection (positive or unknown margins), no or missing follow up, patients that received preoperative chemotherapy, those who died within 30 days of surgery, or patients with a history of another cancer. Patients were grouped into those who did and did not receive cranial radiation within 8 months of surgery (8 months is the usual window for completion of adjuvant chemoradiation) (11). Patients with an unknown radiation treatment status or who received radiation to the chest/mediastinum were excluded to isolate the impact of PCI alone on survival.

Demographic, tumor, and treatment characteristics are listed in Table 1 as defined in prior publications (12). A full list of variables obtainable in the NCDB can be found online (10). 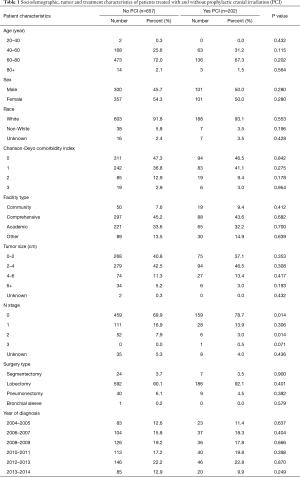 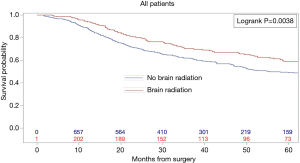 Figure 1 A Kaplan-Meier curve shows the survival of all included patients grouped by whether they received brain radiation (red line) or no brain radiation (blue line). Number of patients at risk at each time interval are shown at the lower margin. 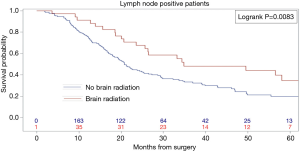 Figure 2 A Kaplan-Meier curve shows the survival of all included lymph node positive patients grouped by whether they received brain radiation (red line) or no brain radiation (blue line). Number of patients at risk at each time interval are shown at the lower margin. 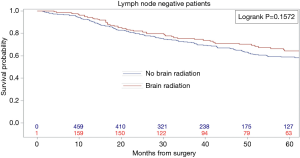 Figure 3 A Kaplan-Meier curve shows the survival of all included lymph node negative patients grouped by whether they received brain radiation (red line) or no brain radiation (blue line). Number of patients at risk at each time interval are shown at the lower margin. 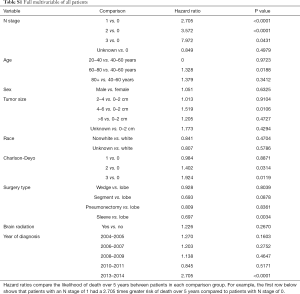 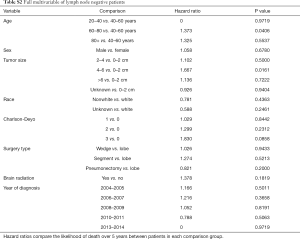 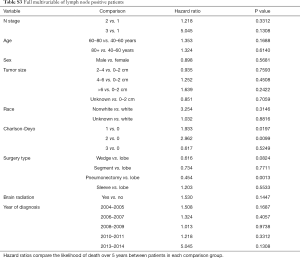 This retrospective analysis of the NCDB is the first large study to demonstrate a survival advantage associated with adjuvant PCI following surgical resection of early-stage SCLC. Furthermore, PCI seems to be particularly advantageous for patients with pathologically confirmed lymph node involvement that do not receive mediastinal radiation. The benefit of PCI in node negative early stage patients remains unclear.

In its current form, the use of PCI for early-stage surgically managed patients varies by institution, and is not currently endorsed by national consensus guidelines (8). The support for PCI is largely based on data from small studies of locoregional or metastatic SCLC, given the propensity for the development of systemic failure, including metastatic disease to the brain, in shorter intervals compared to non-SCLC (2,3,6,7). As a result, PCI has largely been used in conjunction with systemic therapy for patients with locoregional or advanced disease. The current results confirm data from prior studies that found PCI was associated with increased survival in limited stage patients who responded to chemotherapy (2,3). Additionally, the results of the current analysis add to conclusions from a previous report derived from NCDB data (11) as well as a single institution study from China (13), which both suggested improved outcomes of PCI in resected SCLC patients. The current study improves on these findings by drawing a large patient population from a national tumor registry, directly comparing PCI to no PCI in a multivariable Cox model, and including patients with positive lymph nodes.

The finding that surgically resected SCLC patients with lymph node metastasis have the largest survival benefit from PCI is congruent with a previous study that found lymphovascular invasion and higher stage after surgical resection were independent risk factors for the development of brain metastases (14). These results are consistent with previously reported single institutional data that also defined a survival benefit for PCI in patients with higher than stage I disease (13). The current study also demonstrated no significant survival benefit for PCI following surgically resected, node negative disease. This is also consistent with previously reported single institutional data (13). However, these results should be viewed with caution as both this present study and prior data were likely underpowered to detect subtle survival differences in the small sample of node negative patients. For example, the current study achieved only 27% power to detect a survival difference in the lymph node negative group at the predicted Hazard Ratio of 0.82. Although the current study had a substantially larger sample compared to prior work, power remains a critical hurdle in evaluating this lung cancer subset. A larger sample or prospective trial is needed to clarify whether early stage lymph node negative patients may benefit from PCI.

The current results should be considered in tandem with the results of a recent randomized controlled trial of PCI in patients with extensive SCLC in Japan that suggested new insight into the mechanism of PCI (15). This study was unique in that it looked at only SCLC patients with confirmed absence of brain metastases by MRI and demonstrated no survival benefit for PCI (15). A suggested interpretation of these findings is that the benefit of PCI is actually due to treatment of subclinical brain metastases in patients that have not been imaged before treatment (16). In terms of the current analysis, the NCDB does not track brain imaging, so this variable could not be included. It is unknown whether necessitating brain imaging before treatment with PCI would change the interpretation of outcomes for patients after resection of limited disease as in the present study. Despite this limitation, the current study implies that PCI for resected patients is associated with improved survival, and therefore an intervention to mitigate brain metastases (whether it be PCI or surveillance brain imaging with cranial radiation when clinically appropriate) may be indicated in these patients.

This analysis identified that current practice patterns do not favor treatment with PCI following surgical resection for early stage SCLC. Previous studies have reported reticence to utilize cranial irradiation due to the dissuasion of cognitive complications associated with treatment, particularly when the treatment goal is prophylaxis (6,7). While the incidence of neurocognitive side effects cannot be determined in this study because this metric is not tracked by the NCDB, previous studies have reported that neurocognitive side effects of PCI vary greatly based on treatment type, dosing, or use of concurrent chemotherapy (incidence of up to 63%) (17,18). Contrarily, two randomized trials that carefully considered cognitive testing found no association between PCI and neurocognitive side effects (19,20). Nevertheless, in the current study only 23% of the total study group and only 19% of lymph node positive patients received PCI, which is significantly lower than previously published. In an analysis of the Quality Research in Radiation Oncology database from 2006–2007, 49% of limited stage SCLC patients were managed with PCI. The current findings may represent a true lower utilization of PCI in this surgical cohort or may be explained by inherent differences of the databases studied (21). Nevertheless, these findings underscore the idea that PCI may be underutilized, may be more clinically relevant than previously considered, and is an area that requires further study.

Several limitations are worth mentioning from this retrospective analysis of registry data. Most importantly, this study was underpowered to demonstrate a survival advantage of PCI for node negative early-stage patients. However, the survival difference for lymph node positive patients was large enough to be significant with our relatively limited sample size. Attempts to identify other factors associated with benefit from PCI including tumor size, age, sex and lymph-vascular invasion are limited given the sample size of our study population. An additional limitation is that there may be a selection bias for patients who were offered PCI. However, in our post-hoc analysis of patient and tumor characteristics, we found only a few small differences between PCI and non-PCI groups. Additionally, we only included patients who received standard of care multi-agent adjuvant chemotherapy in an attempt to exclude those who were not treated with “intent to cure”. This sample limitation may have introduced some level of selection bias. However, we believe our study group was most appropriate to understand the specific advantages associated with PCI in this limited subset. Another limitation is that patients who received mediastinal radiation were excluded from this analysis. Because the NCDB does not report 2 sites of radiation treatment, and that treatment with mediastinal radiation (regarded as the primary site) would eliminate our ability to identify PCI patients, exclusion of mediastinal radiation patients was necessary. Although the minority of patients receive thoracic radiation after resection for SCLC, excluding these patients reduced the sample size available for this analysis and potentially the ability to identify a survival advantage associated with PCI in node negative patients. We analyzed and adjusted for patient and tumor specific factors available in the NCDB, but we acknowledge that there may be other unknown confounders that could bias this retrospective analysis. For example, the NCDB does not track detailed information about recurrence, so the association of PCI with recurrence pattern or the specific mechanism by which PCI increases survival cannot be defined with granularity in this study. However, due to the fact that there is limited data on the impact of PCI in surgically managed patients, this analysis represents an important evidence-based rationale for continuing to consider and evaluate PCI in this limited stage SCLC group.

PCI is associated with increased survival for patients following resection of early-stage SCLC. Patients with pathologically defined local lymph node involvement appear to benefit the most, while it remains unclear if patients without lymph node involvement derive a benefit from PCI. Further prospective study is warranted to clarify which subsets of patients should be managed with PCI in addition to established adjuvant therapy available to SCLC patients.

Ethical Statement: This study was approved by the Yale Institutional Review Board with patient consent waived (Protocol #1103008160: Clinical and Molecular Predictors of Survival in Thoracic Malignancies).