Senescent cells cause arrest of proliferation as well as exhibit the senescence-associated secretory phenotype (SASP) that is characterized by the profuse expression and secretion of various inflammatory proteins into the surrounding tissues (15). van Deursen (16) have reported that SASP contributes to malignant transformation and degenerative diseases, indicating that SASP is an important factor linking cellular senescence to COPD and ILD. A study has suggested that cellular senescence does not simultaneously occur with SASP (17); therefore, the relationship between cellular senescence and SASP warrants investigation. Because SASP develops primarily via NF-κB signaling (18-20), we investigated the relationship between cellular senescence and SASP in patients with COPD, IPF, and CTD-ILD by subjecting the tissues from such patients to immunostaining for phosphorylated NF-κB and p16.

Data were analyzed using the Kruskal-Wallis test, and a P value of <0.05 was considered as statistically significant. Excel Statistics Software (SSRI Co., Ltd.) was used for data analyses. 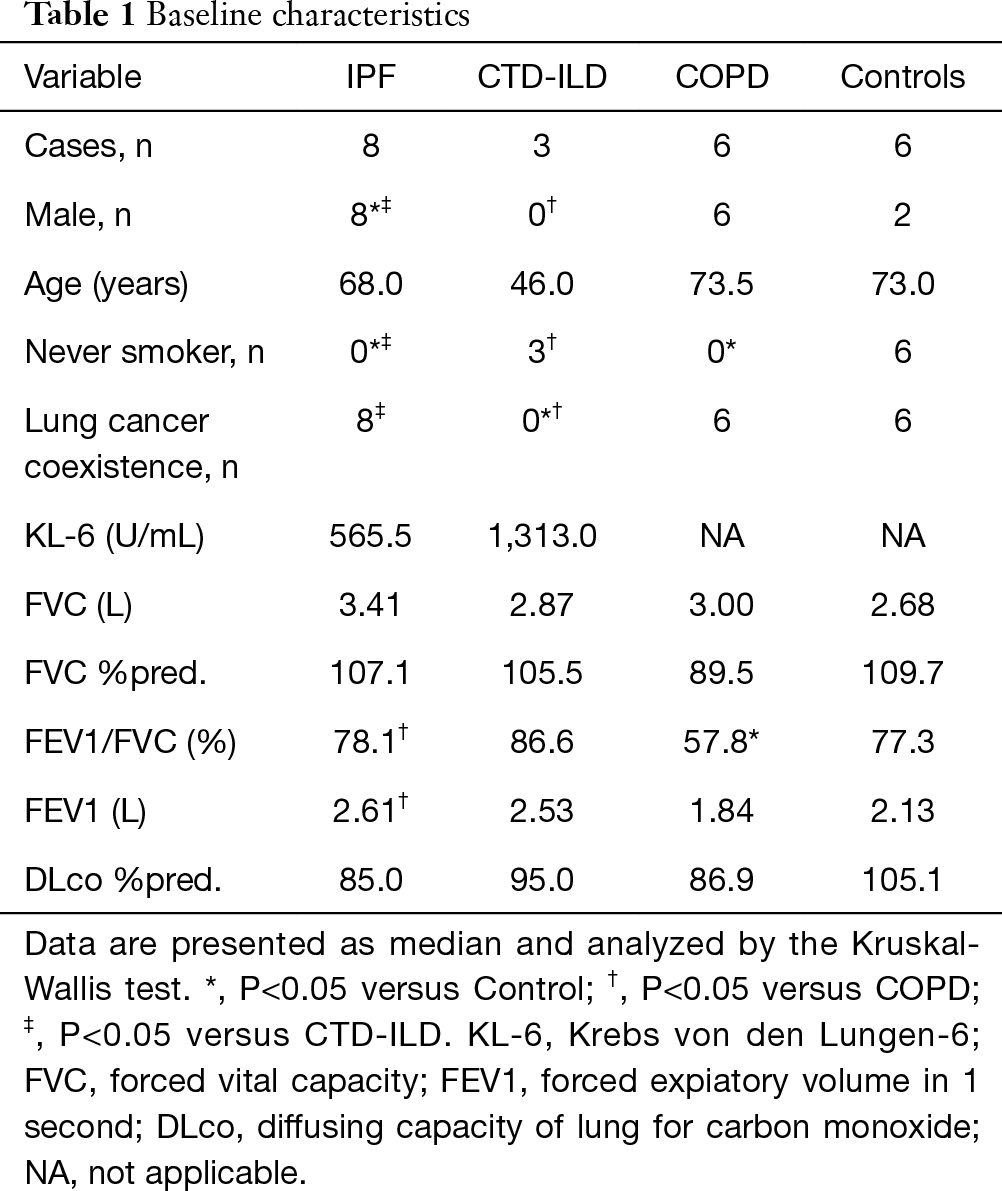 Figure 1 Low power (A) and high power (B) photomicrographs of immunohistochemical staining for p16 (brown) in lung tissues with IPF. Nuclear counterstaining was performed using hematoxylin. Original magnifications were ×40 in (A) and ×100 in (B). 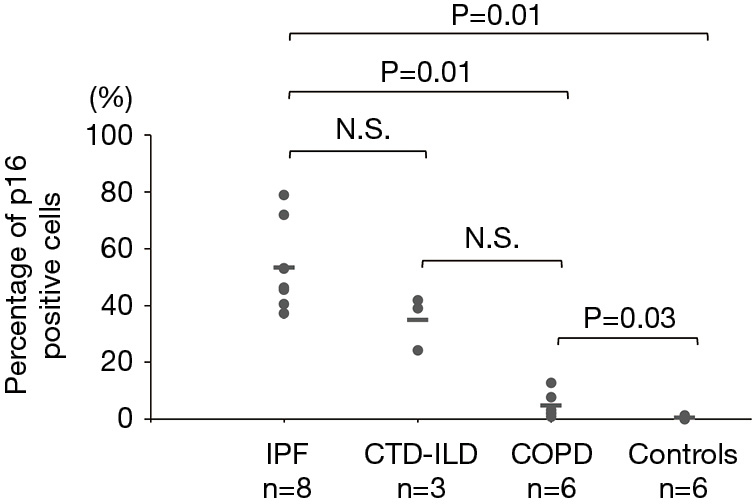 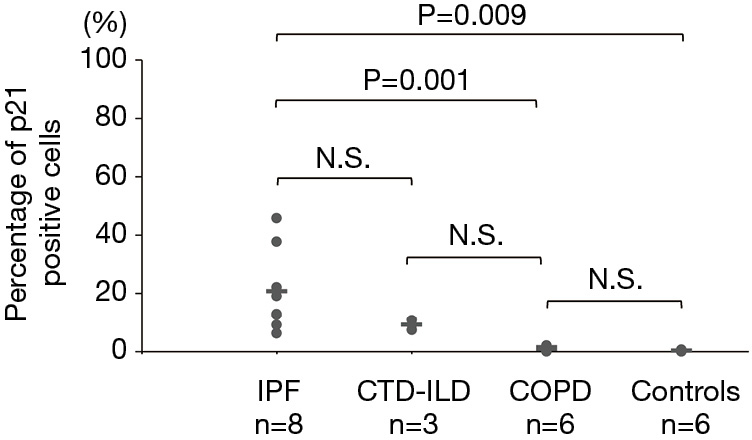 Figure 4 Double-staining for p16 (green) and phosphorylated NF-κB (brown) in a case with IPF (A, ×400) and that with controls (B, ×200) was performed. The epithelial cells with IPF were stained green and brown. IPF, idiopathic pulmonary fibrosis. 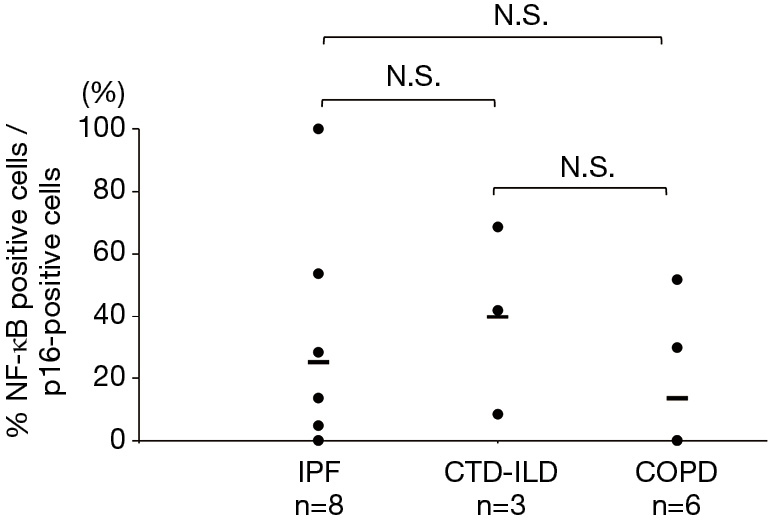 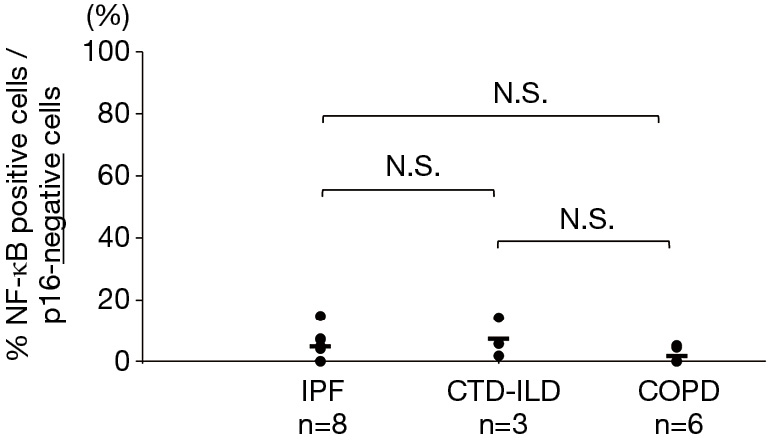 Cellular senescence is a state wherein the cells cease to replicate (1). The expression of cyclin-dependent kinase inhibitors, such as p21 and p16, is enhanced in senescent cells, leading to permanent cell cycle arrest (2,3,22). The p21 protein arrests cell cycle progression during the G1 phase by inhibiting CDK1 or CDK2 (23,24). The expression of this protein is strictly controlled by the p53 tumor suppressor (25). The p16 protein binds to CDK4 or CDK6 to participate in the induction of cell cycle arrest (26). In addition to cell cycle arrest, senescent cells are primarily characterized by resistance to apoptosis, flattening and enlargement of the cells, changes in the expression of cellular senescence-related genes, and SASP (27). The causes of cellular senescence include the telomere shortening, oxidative stress, oncogenes, and DNA damage (28).

In patients with COPD, cellular stress and telomere shortening due to tobacco smoke induces cellular senescence (29,30), resulting in an abnormal increase in cytokine secretion from the senescent cells (SASP) and the inhibition of cellular proliferation. Cellular senescence occurs in several types of cells in COPD. Reports have shown shorter telomere length in the peripheral blood neutrophils in patients with COPD than that in normal healthy controls, with the evident progression of cellular senescence in the alveolar epithelial cells, vascular endothelial cells, fibroblasts, and stem cells (31-33).

Telomere shortening has been reported to occur in both IPF and CTD-ILD (42), despite differences in their etiology, indicating that cellular senescence and SASP are induced in CTD-ILD. No significant differences were observed in both the p16- and p21-positive rates in the IPF and CTD-ILD groups; however, they tended to be higher in the IPF group. We suggest that the lower degree of cell senescence in patients with CTD-ILD than that in patients with IPF is attributable to the progression of CTD-ILD that occurs at a slower rate than that of IPF as well as to the number of younger nonsmokers observed in the CTD-ILD group compared with the IPF group.

Our study has several limitations. First, the sample size in each disease group was low; however, the present series enabled us to demonstrate the differences in the degree of cellular senescence among pulmonary fibrotic lesions, emphysematous lesions, and control tissues. Second, the influence of lung cancer must be considered, because cases in all of the groups except CTD-ILD had lung cancer. Although we prepared microscopic tissue sections from the regions of pronounced fibrotic changes with no malignant cells to minimize the possible influence of lung cancer, the effects of malignancy could not be completely dismissed. Patients in both the IPF and control groups were diagnosed with lung cancer; therefore, the results in both groups might have similar cancer effects. However, we considered that the influence of lung cancer was negligible based on the comparison between both groups. It is possibly important that the expression of p16 and p21 was significantly stronger in the IPF group compared with controls. Third, the influence of smoking history must be considered. In patients with non-small cell lung carcinoma and a smoking history, there is a report that p16-positive rate was higher than in patients with non-small cell lung cancer without a smoking history (43). Nevertheless, the p16-positive rate was higher in patients with CTD-ILD without a smoking history than in those with COPD without a smoking history in the present study. Fibrotic disease might have a greater influence on the p16-positive rate than the smoking history. Moreover, it is possible that our result was influenced by the sex of the patients. In the present study, no significant difference was observed between men and women in the control group. All patients with IPF underwent lung cancer surgery; thus, our cohort primarily comprised patients with mild IPF. Although median value of pulmonary function testing was within the normal range, all patients with IPF pathologically exhibited UIP pattern; despite mild IPF, cell senescence was observed in all these patients.

Ethical Statement: This study was approved by the institutional review board of the Saitama Red Cross Hospital (approval number: 20140115-2).