The correction of the majority of congenital cardiac defects requires the implementation of an extracorporeal circulation circuit (ECC). Currently, the applied circuits for ECC in pediatric cardiac surgery are similar to the systems used in adult cardiac surgery, consisting of the basic components: a roller pump, an oxygenator, an open gravity-depending blood reservoir for venous return and shed-blood managing. Although this system provides adequate and safe hemodynamic support for the wide spectrum of corrective surgical procedures in pediatric patients, it is associated with multiple significant adverse effects (1-3). Of particular concern are the detrimental effects to the coagulation system and the provocation of an acute systemic inflammatory reaction (4,5). These negative effects mostly occur in response to the blood-artificial surface and blood-air contact, the mechanical damage to the blood components, the consumption of coagulation factors with subsequent transfusion requirements (5,6). The systemic inflammatory response syndrome presents in a reduced postoperative clinical status with cardiopulmonary and renal dysfunction, increased microvascular permeability leading to edema and tissue malperfusion, which can ultimately result in multiorgan failure, and which is particularly pronounced in infants and neonates (6,7).

However, all this evidence is deriving from studies performed in adult patients with the majority being coronary artery bypass grafting and aortic valve replacement procedures. Providing those positive effects, the MiECC perfusion concept appears particularly of interest for pediatric cardiac surgery. However, so far, there are no reports on the clinical application of a MiECC system for corrective surgery in neonates and children.

Here we report our initial experiences by using a MiECC system in pediatric cardiac surgery.

The system specification and requirements were determined to be:

Following the classification of MiECC circuits by the Minimal invasive Extra-Corporeal Technologies International Society (MiECTiS), type I and type III perfusion circuits were assembled depending on the planned intervention: type I was applied for closed heart interventions while type III was used for open heart procedures (9).

The MiECC type I consists of a closed circuit, which includes the oxygenator, the pump and tubing lines. The circuit has no open venous reservoir. All components of the minimal invasive extracorporeal circuits are coated with heparin and the tubing system is significantly reduced in length. In closed heart procedures e.g., central aortic-pulmonary shunt procedures it is possible to reduce the MiECC systems to a minimum (9). For management of intraoperative shed-blood the use of autologous cell saver transfusion system is required.

The main difference between MiECC type l und MiECC type III is the improved capability of shed-blood management. This is achieved by different modular configurations: First, the installation of a reservoir in the MiECC circuit. Second, the integration of additional cardiotomy suction and venting lines (Figure 1). 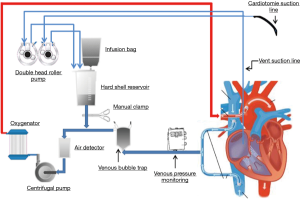 The MiECC priming consisted of Ringer’s Lactate mixture and red-blood-cells in selected cases with a hematocrit <25%.

Surgical interventions were performed in a standardized fashion as required for the correction of the underlying malformation. Either a median sternotomy (MS) was applied or in selected cases a vertical right axillary thoracotomy (VRAMT) for atrial septal or ventricular septal defects (VSDs).

While surgical shunt implantations, partial cavopulmonary connections (PCPC) and total cavopulmonary connection (TCPC) procedures were performed on a closed, beating heart; right ventricle-to-pulmonary artery (RV-PA) conduit changes were performed with a beating heart, and corrections of atrial septal defects (ASD) type II, VSDs and partial atrioventricular septal defects (PAVSD) were corrected during short episodes of induced fibrillation. For all procedures, the surgical field was routinely flooded with continuous CO2 insufflation. MiECC was established following aortic and venous cannulation in a normal fashion by using DLP® cannulas (Medtronic Inc, Minneapolis, MN USA) In selected cases percutaneous venous femoral cannulation was performed in the setting of a bi-caval venous cannulation (BIO-MEDICUS®, Medtronic Inc., Pediatric-Venous-Cannulae). During the set-up of the MiECC system, attention was given to a bubble-free connection between the cannulas and the tubing. Venous cannulas were retrograde flushed and filled. A supplemental video demonstrates the correction of a tetralogy of fallot by using a MiECC type III circuit (Figure S1). 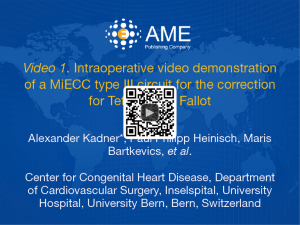 Anticoagulation was achieved by administration of a heparin bolus of 400 IE/kg aiming an activated clotting time (ACT) of 450–500 seconds (9,18). All procedures were performed at normothermia, beside body temperature was lowered to mild hypothermia when cardioplegic arrest was applied. The utilized cardioplegia consisted of a single-shot crystalloid cardioplegia (Cardioplexol™) with a volume concentration of 1.5 mL/kg bodyweight as reported previously (19).

The perfusion parameters were monitored in a standardized fashion by invasive arterial and central venous pressure (CVP) measurement with targeting a mean arterial pressure of 40–50 mmHg and a CVP below 10 mmHg. Cerebral perfusion was monitored by using cerebral-near-infrared-spectroscopy (NIRS). Blood gas sampling was performed at regular intervals perioperatively. Transfusion targets were set to a lower limit with a hematocrit of 25% and a hemoglobin level of 80 g/L (20).

Transesophageal echocardiography (TEE) was routinely performed for evaluation of cardiac performance and the results of the surgical correction. The postoperative management followed standardized routine treatment protocols.

All operated patients by MiECC were included in the analysis. Missing data were not included in the final statistics (accounting for less than 2%). Variables are presented as numbers with % or as median with min-max ranges and of categorical variables are displayed as frequency distributions (n) and simple percentages (%).

A MS was applied in the majority of cases (72%) and a vertical right axillary thoracotomy in 11 (28%) cases. Peripheral percutaneous venous cannulation for the inferior caval vein was performed in 9 cases (24%).

For both MiECC types no system related technical complications were encountered. Related to the patients’ body surface area (BSA) adequate flows were at a median of 1.2 L/min (range, 0.5–3.6 L/min) with a target mean arterial pressure between 40 to 50 mmHg at normothermia. The MiECC perfusion times were at a median of 53.5 min (range, 19–117 min). Beating heart procedures were performed in 23 cases (60%) at normothermia, while at 15 interventions cardioplegic cardiac arrest was induced at mild hypothermia. The cross-clamp times varied from 15 to 55 min with a median of 29 min (Table 2).

All patients had an uneventful perioperative course with no in-hospital mortality. Major adverse cardiac and cerebrovascular events (MACCE) did not occur in the hospitalization period.

As previously mentioned, the application of the MiECC perfusion concept to pediatric cardiac surgery might allow for improved perioperative outcome, similar to the positive effects and results demonstrated in adult cardiac surgery. Here we report the first successful application of a MiECC system customized for closed and open pediatric cardiac surgery. The system was working reliable and no conversion to CECC was necessary. All corrective surgical procedures could be performed in a standardized fashion for a variety of malformations with good results and uneventful postoperative course. The modular concept of the system allowed for the adjustment of the perfusion system to the requirement of the intervention. Thus, procedures on a beating closed heart, such as the implantation of a central aorto-pulmonary shunt can be performed by applying a MiECC type I. The application of such a completely closed circuit presents an appealing and attractive solution with the potential for significant benefits for the patients. Thus, particularly due to the fact, that the majority of the patients undergoing shunt procedures present newborns with a bodyweight between 2.5–3.5 kg.

For all open-heart procedures, a reservoir had to be added for venting and suction blood management. Certainly, the resulting MiECC type III signifies a drawback towards the concept of creating a closed perfusion system with as minimalized blood-air contact as possible. Our group is currently investigating into the development of a venting and blood suction system without a hard-shell reservoir. This system should allow for minimizing air aspiration and subsequent air elimination prior to direct re-transfusion into the closed perfusion circuit (9).

While a continuous adequate perfusion was achieved by applying standard cannulation techniques and materials, we would like to address a typical MiECC associated phenomenon: the adjustment of the venous suction drainage, particularly at the start of the perfusion, requires special attention by the cardio-technician and surgeon. Prior to embarking on cross-clamping and cardioplegia administration, time has to be provided in order to establish a balanced and stable perfusion on the MiECC circuit. Especially in the setting of bi-caval cannulation in infants, we observed the occurrence of an imbalanced drainage mostly due to the intermittent collapse of the superior caval vein. Management of this phenomena consisted of the partial clamping of the non-corresponding inferior venous cannula (IVC) or a short reduction of the pump speed. The application of these maneuvers led to a stable perfusion with a balanced venous drainage and the avoidance of additional volume bolus.

Regarding volume management, an advantageous component of our MiECC concept presents the type of applied cardioplegia. The low-volume single shot crystalloid cardioplegia is in line with the principles of MiECC by ensuring limited hemodilution and transfusion requirements. As previously reported, this cardioplegia provides an adequate cardioprotection for cross clamp times of up to 60 min (12,21).

It has to be acknowledged, that proof of a beneficial effect by using a MiECC circuit for pediatric cardiac surgery cannot be answered by this report and needs further investigation. So far, the primary goal was to evaluate the technical feasibility of a MiECC system in neonates up to teenaged patients. Given our experiences, we conclude that MiECC perfusion systems are feasible for closed and open congenital cardiac interventions by using standard techniques and good surgical results.

Until now, almost all advocated positive results and beneficial effects of using a MiECC system derive from adult cardiac surgery. The only studies evaluating the effects of a MiECC system towards its performance in pediatric patients present two animal studies in rabbits. Schnoering et al. compared the inflammatory reaction following the application of a newly developed MiECC type III system against a roller-pump-based ECC. The authors observed less activation of immunological markers, such as IL-6, IL-8, IL-10, and an improved balanced between IL-10/IL-6 ratio, for rabbits of 4.04±0.52 kg following perfusion with a MiECC system (22). In a study by Schnoering et al. less consumption of fibrinogen and lower levels of plasma-free hemoglobin were observed following MiECC perfusion (23). Beside those findings derive from rather small study samples, they are in accordance with the previously mentioned significant positive effects demonstrated for adult cardiac patients undergoing MiECC perfusion (24).

Although appearing to be a detail, we also believe, that a significant technical advantage by using a MiECC system presents the positioning option of the ECC components in the very near proximity to the patient at the operating table. This can allow for a significant further reduction of the tubing length and priming volume of the perfusion system, which might be not possible by using an open gravity-depending conventional ECC system.

We acknowledge some limitations of our study. It was a retrospective observational analysis and therefore cause and effect are hard to establish.

MiECC can be performed by using standard techniques for closed and open cardiac procedures for the correction of a variety of malformations in neonates and children with good results and uneventful postoperative course.

The authors would like to thank the cardiotechnicians Martin Schrag, Etienne Zermatten and Anne-Kathrin Beese for their help and assistance.

Ethical Statement: According to hospital policy the patients or their relatives when younger than 18 years signed at admission a general informed consent for data collection and regular follow-up for the purpose of medical research.