Inflammation is known to increase the risk of many types of cancers (including bladder, cervical, gastric, intestinal, esophageal, ovarian, prostate and thyroid cancer) through oncogenic mutations, angiogenesis, and change in the tumor microenvironment (1). Neutrophils, as a key inflammatory cell type, are known to progress tumor by upregulating inducible NO synthase (iNOS) which results in increased release of reactive oxygen species that directly damages DNA. Neutrophils are also known to play an important role in tumor angiogenesis by expressing vascular endothelial growth factor (VEGF) and releasing matrix metalloproteinase-9 (MMP-9) which have been shown to have the most profound effects in mediating tumor angiogenesis (2). Many recent reports have revealed that serum neutrophil-to-lymphocyte ratio (NLR) is related to the prognosis of various type of cancers from multiple organs (3-13). Many studies have demonstrated a relationship between the initial preoperative NLR and prognosis in patients with various type of cancers including NSCLC, and some of the more recent studies demonstrated prognostic significance of postoperative NLR and change in NLR in gastric cancer and non-small cell lung cancer (NSCLC) as well, emphasizing the prognostic significance of the dynamic change in the NLR after the treatment (3-12).

Primary pulmonary sarcomatoid carcinoma (PSC) is a rare variety of tumors which is included in NSCLC category with its incidence reported to vary from 0.1% to 4.1% (14). Previous reports have shown poorer prognosis after surgical resection than other types of NSCLCs with prognostic factors such as complete resection, lymph node (LN) metastasis (14-18). Primary PSC is also known to be refractory to conventional chemotherapy and radiotherapy with higher possibility of earlier metastases (19). Therefore, we tried to investigate the effect of immunologic factor on this rare type of cancer. Because of its rare incidence, the actual prognosis and its risk factors of completely resected primary sarcomatoid carcinoma is not well known. We performed this study to evaluate if there is prognostic significance between perioperative change in NLR and survival in patients with completely resected primary PSC.

This study was approved by the Institutional Review Board of our institution (IRB Number: B-1809-495-111, Seoul National University Bundang Hospital). From October 2003 to September 2015, a total of 50 patients underwent surgical resection for primary PSC at our institution. After excluding incompletely resected cases, pM0 and patients who had any history of another type of cancer, a total of 37 patients were included in the analysis. Clinical and pathological data of the patients were retrospectively retrieved from our prospectively collected lung cancer database and from our electronic medical record system. The preoperative evaluation included a detailed clinical history of the patient and physical examination, complete blood count (CBC) and blood chemistry analysis, bronchoscopy, computed tomography (CT) scan of the chest and upper abdomen, positive-emission tomography (PET) scan of the whole torso, brain magnetic resonance imaging (MRI), and pulmonary function tests. If lymph nodal metastasis was suspicious from the imaging studies, transbronchial needle biopsy with an endobronchial ultrasound (EBUS) was performed. The histologic diagnosis of the primary sarcomatoid carcinoma was made according to the 8th edition of the American Joint Committee on Cancer (AJCC) staging system. Every patient underwent an anatomical resection (at least segmentectomy) of the cancer. Surgery of the patients was performed by thoracotomy or video-assisted thoracoscopic surgery (VATS) under general anesthesia. All the patients were regularly followed up at the outpatient department. The initial neutrophil-to-lymphocyte ratio (iNLR) was calculated from the CBC which was obtained within 1 week before the surgery, and the postoperative NLR (pNLR) was obtained from the immediate postoperative CBC. iNLR subtracted from pNLR (pNLR-iNLR) was defined as change in NLR (ΔNLR).

Statistical analysis was performed using the SPSS for Windows, version 20.0 (IBM Corporation, Armonk, NY, USA) and R 2.13.0 (The R foundation). Maximally selected chi-square test was used for estimating the cutoff point number. Chi-square test, Student’s t-test, and log-rank test were used for the univariate analysis of the variables. Kaplan-Meier survival curve was used for estimating the overall survival and disease-free survival. Cox regression model was used for the multivariate analysis of the overall survival and disease-free survival. 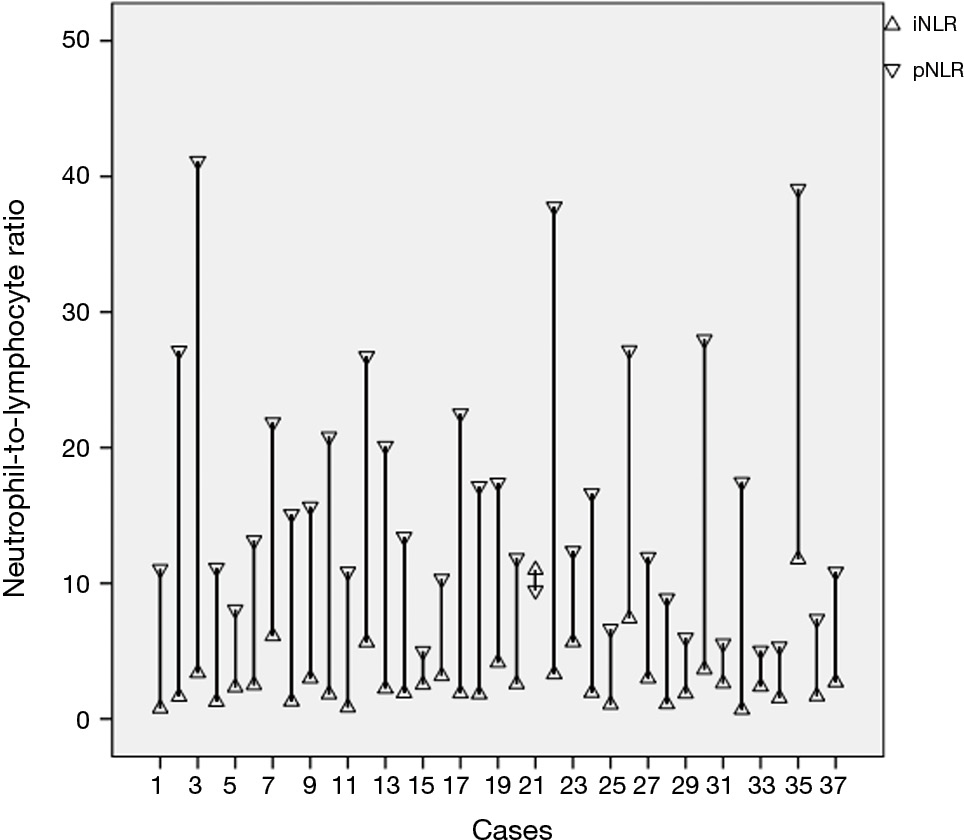 Analysis of the NLR

Figure 3 Overall survival (A) and disease-free survival (B) according to the change in neutrophil-to-lymphocyte ratio (ΔNLR).

Univariate analysis of the overall survival by the log-rank test revealed age more than 70 years (P=0.009) and ΔNLR >17 (P=0.005) to be the risk factors. Higher iNLR (2 or less vs. >2, P=0.794), higher pathologic T stage (pT1–2 vs. pT3–4, P=0.416), lymphatic invasion (P=0.509), vascular invasion (P=0.813), presence of LN metastasis (P=0.744), and pure or mixed cell type (P=0.655) revealed no significant effect on overall survival. Neither neoadjuvant nor adjuvant chemotherapy had a significant effect on overall survival (P=0.442 and 0.662, respectively) as well. Age more than 70 years and ΔNLR >17 were also the risk factors for disease-free survival from the univariate analysis (P=0.036 and P=0.018 respectively). Multivariate Cox regression analysis revealed age >70 and ΔNLR >17 to be independent risk factors for the overall survival, and ΔNLR >17 to be the only independent risk factor for the disease-free survival (Table 2). This cut-off value 17 is just a value calculated only from our data which is not externally validated. 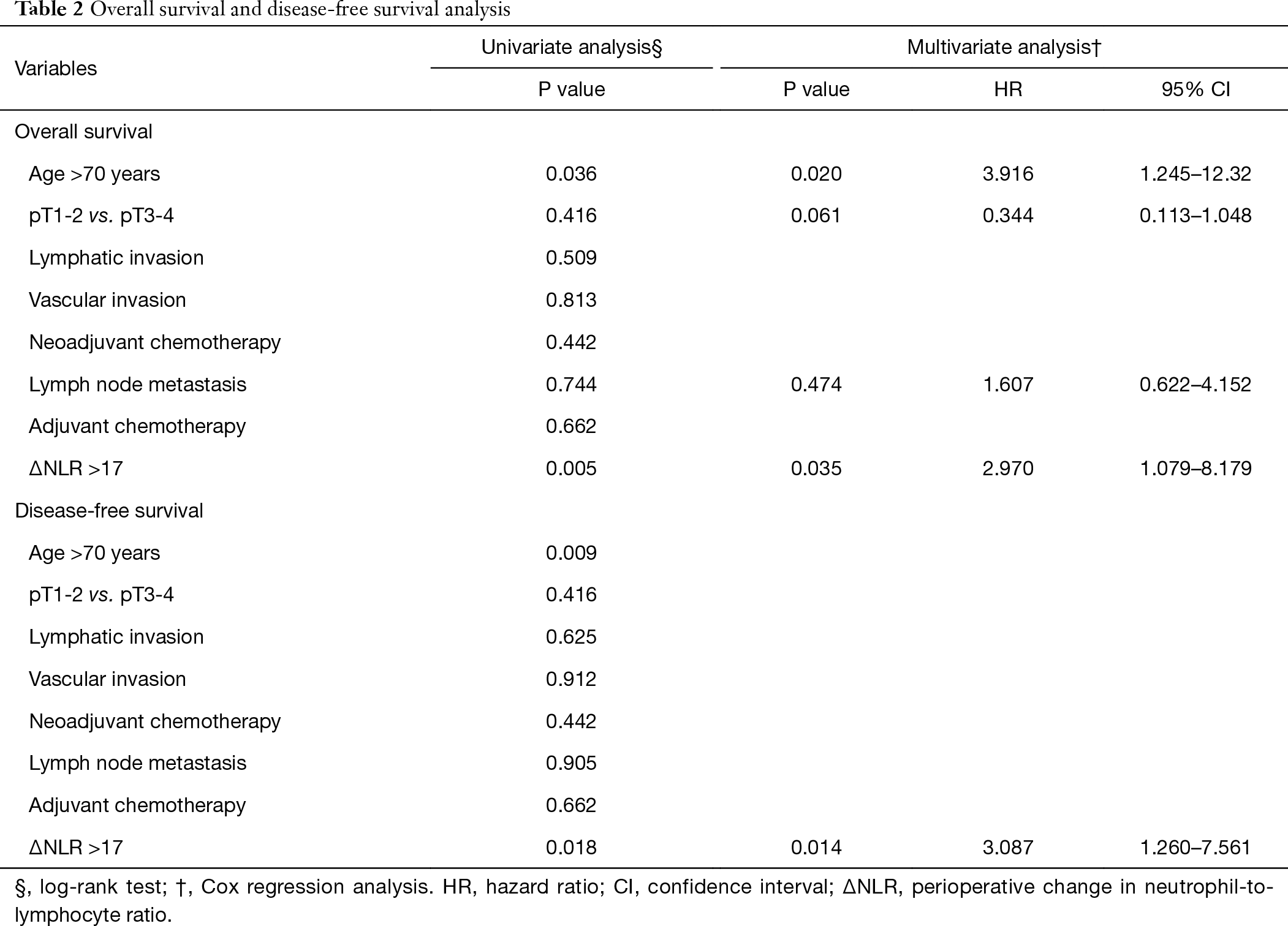 Our data demonstrate the long-term clinical outcomes after complete resection of the pM0 primary PSC with the change in neutrophil-to-lymphocyte ratio as a significant prognostic factor. Fishback et al. reported in the year 1994 about 76 cases of pleomorphic sarcoma with a poor median survival of 0.83 years, but this study included who are not surgical candidates, and 12% of stage IV disease (21). Chang et al. reported a similar smaller series of 16 cases (7 underwent surgery) with a median survival of 0.25 years (22). Raveglia et al. reported in the year 2004 about 20 patients who all underwent surgical resection, and the patient all turned out to be pM0. The median overall survival was 0.67 years with early relapse of the disease, and the clinical outcomes seemed pessimistic even after surgery and adjuvant chemotherapy due to this early relapse (15). Park et al. reported in 2011 about outcomes after curative resection for sarcomatoid carcinoma of the lung with 5-YSR of 54.3%. In their series 43 patients (43.4%) had recurrence and 77.6% of the recurrences (33/43) were distant metastasis (23). Huang et al. reported in 2013 about 51 (37 patients underwent surgery) with a 5-YSR of 20.1%, and revealed tumor size and M stage as independent risk factors for prognosis (18). More recently, Okuda et al. reported in 2017 about 24 patients who had completely resected pM0 pulmonary pleomorphic carcinoma with 5-YSR of 54.7% and 5-year progression free survival 52.4%. They revealed vascular invasion and LN metastasis to be independent risk factors for overall survival (24). The survival data of our series is relatively favorable which is similar with those reported by Okuda et al., and which is relatively higher than previous studies. These relatively better survival outcomes may be attributable to excluding patients with a history of other malignancy and only including completely resected pM0 patients. There were only five patients (13.5%) who were diagnosed as pT1, which might be due to the aggressive behavior of the tumor. Our data also revealed 45.9% (17/35) of recurrence and most of the recurrence was distant recurrence (15/17, 94.6%) with 41.2% (7/17) recurring within 0.5 years, which is similar with the report from Yuki et al. and Park et al. (16,23). There has been controversy regarding prognostic factors─some studies reported tumor size, some studies reported complete resection, and some studies reported LN metastasis (14,16,17,21,24,25). However, data from our series revealed no significant relationship between prognosis and tumor size, pT stage, tumor composition (pure or mixed sarcomatoid), LN metastasis. Adjuvant chemotherapy had no prognostic significance on survival from our series, similar to reports from Lin et al. and Raveglia et al. (14,15).

Regarding the NLR, activated neutrophils can release matrix metalloproteinases (MMPs), especially MMP-9, which activates potent angiogenic factors (VEGF, fibroblast growth factor-2). On the other hand, lymphocytes act as a suppressor of cancer progression. Cytotoxic lymphocytes can kill tumor cells and are applicable for cancer immunotherapy (12). Tsubata et al. reported that VEGF expression was present in many cases of pulmonary pleomorphic carcinoma and a higher score of angiogenesis was significantly related to a poorer prognosis (26). The NLR is a readily available, inexpensive, and can be easily calculated and obtained from the database compared to other molecular markers. Earlier reports about NLR mostly focused on the significance of the initial (pretreatment) NLR. Khunger and colleagues reported the clinical significance of post-treatment NLR in 109 patients with NSCLC treated with nivolumab, which revealed that higher post-treatment NLR was related with poorer survival and non-respondence to the treatment (27). However, some of the recent papers are more focusing on the clinical significance of the change in NLR. Dan et al. reported the postoperative NLR change was an independent prognostic factor for patients undergoing radiofrequency ablation for small-sized hepatocellular carcinoma (28). Min et al. and Li et al. reported similar results for gastric cancer and colon cancer, respectively (12,29). Our data also revealed similar results, with ΔNLR being the independent prognostic factor for the overall survival and disease-free survival. We carefully suspect that more dynamically increased NLR after the surgery reflects higher neutrophil activity over lymphocyte activity after the surgery, which resulted in poorer survival. We measured postoperative NLR from immediate postoperative laboratory data to minimize the effect of postoperative infection or physical invasiveness from the surgery.

Ethical Statement: This study was approved by the Institutional Review Board of our institution (IRB Number: B-1809-495-111, Seoul National University Bundang Hospital).