A possible link between inflammation and cancer development was first reported by Rudolf Virchow in 1864 when he made an observation that inflammatory cells frequently infiltrate solid tumors (1). Despite these early observations of infiltrating inflammatory cells within tumors, oncogenic processes and malignant transformation are investigated independently of the immune system in earlier studies. However, recent developments and advent of modern technologies allowed us to investigate the detailed role of inflammation in tumor progression and metastasis confirming Virchow’s initial observation. Therefore, a substantial clinical link between inflammatory states and cancer development has been established in recent epidemiological studies and also evidenced by the associations of ulcerative colitis, hepatitis C and chronic pancreatitis to cancers of the colon, liver and pancreas, respectively. The inflammation driven by persistent IL-6/Stat3/NF-κB pathway activity plays a crucial role in tumor development and progression as well as therapeutic resistance (2,3). While inflammatory conditions can promote oncogenic transformation, genetic and epigenetic changes in malignant cells can also induce a pro-tumorigenic inflammatory microenvironment. Of these inflammatory cytokines, IL-6 have received greater attention and has been implicated in plethora of pathological conditions including but not limited to chronic inflammation, metabolic disorders, tumor development, therapeutic resistance and metastasis (4,5). Within the tumor microenvironment, many cell types, including mesenchymal cells, macrophages and other immune cells secrete pro-tumorigenic cytokines including IL-6. In a meta analyses comprising of 11,583 patients with 23 different cancer types, a significant correlation has been demonstrated between elevated serum IL-6 and increased metastatic progression (6). In a variety of pre-clinical models, IL-6 has been shown to promote tumorigenicity, angiogenesis and metastasis (3,7). Consistent with these findings, IL-6 mediated inflammatory pathway renders lung cancer cells resistant to cisplatin treatment (7) while higher systemic IL-6 level is associated with worse prognosis in non-small cell lung cancer (NSCLC) patients (8). Persistent activation of the inflammatory pStat3 pathway in variety of solid tumors via reiterative cross-communication with other stromal cells evade anti-tumor immune responses while leading to immunosuppressive microenvironment (9). Furthermore, inflammatory cytokines drive a distinct epithelial to mesenchymal transition (EMT) phenotype and cancer stem cell (CSC) properties in breast and NSCLCs (2,10). It has been well established that EMT/CSC phenotype plays a major role in tumor development and therapeutic resistance.

Decades of work has firmly established that chronic inflammation is an important underlying mechanism for the development of many human diseases including cancer. It is therefore not surprising that natural compounds with anti-inflammatory properties have become attractive chemopreventive agents. Of these, myo-inositol, a six-fold alcohol of cyclohexane with five equatorial and one axial hydroxyl group, has been widely used as a nutritional supplement in variety of human diseases (11). Interestingly, western diet, low in fiber and lacks some key components such as inositol, has been linked to the pathogenesis of both cancer and metabolic disorders. Although inositol deficiency has been attributed to a wide range of mechanisms, an inositol-low diet is epidemiologically associated with altered glucose metabolism (11). In addition, high glucose levels facilitate the degradation of inositol leading to its reduced biosynthesis and absorption. Although previously underappreciated, this vicious cycle has recently been implicated in deregulation of insulin mediated biochemical/metabolic pathways, PI3K/Akt, PDH and AMPK that were also involved in tumor development and progression (11,12). In line with these findings, epidemiological studies now suggest that obesity is associated with increased incidence of multiple malignancies, which may be related to the known link between obesity and inflammation (13,14). Interestingly, patients with type 2 diabetes mellitus (T2DM) have elevated levels of circulating proinflammatory cytokines including tumor necrosis factor-α (TNFα), IL-6 and C-reactive protein (15). Functional relevance of this link has been demonstrated by diabetes drug metformin reducing tumor growth by suppressing the levels of circulating glucose, increasing insulin sensitivity (16).

In the April 2018 issue of the International Journal of Cancer, team led by Edwin Ostrin, of the University of Texas MD Anderson Cancer Center, reported that dietary myo-inositol exhibits chemopreventive activity in lung carcinogenesis using mouse oncogenic Kras model (17). To generate the relevant transgenic mouse model which is called CC-LR, heterozygous KrasLSL-G12D mouse was crossed with mouse containing Cre recombinase inserted into the Clara cell secretory protein (Ccsp) locus. CC-LR and the control LR (KrasLSL-G12D/+) mice weaned 3–4 weeks post-partum and fed with myo-inositol containing or control diets for the duration of 10 weeks. When tumor burden was assessed by measuring the lung surface tumor counts, lungs from myo-inositol fed animals exhibited significantly lower number of lesions compared to those from animals fed with control diet (Figure 1). Although, previous reports suggested that the mechanism for the chemopreventive activity of myo-inositol may involve suppression of PI3K/Akt pathway (18,19), Unver et al. failed to detect any significant inhibition of this pathway in the lungs of CC-LR and control LR mice fed with myo-inositol diet (17). In contrast, myo-inositol significantly reduced oncogenic KrasG12D and downstream effectors, cRaf and p-ERK in the lungs of CC-LR mice suggesting that PI3K/Akt pathway is not involved in this process. Because of the fact that CC-LR mice compared to control LR mice exhibited a substantially higher inflammatory cytokines, IL-6 and LIF, the team reasoned whether the myo-inositol would have any activity on these inflammatory pathways. Consistent with the latter, there was a significant decrease in cytokines, IL-6 and LIF and concomitant suppression of pStat3 activity in lungs of CC-LR mice when they were fed with myo-inositol diet (17). Next, the authors directly assessed whether myo-inositol affected the IL-6 levels and pStat3 activation in Kras-activated lung mouse cancer cells. Surprisingly, myo-inositol had no significant effect on the levels of IL-6 or pStat3 activity in these lung cancer cells. To identify a possible mechanism for the functional activity of myo-inositol in CC-LR mouse model, team suspected that inflammatory signaling may have an impact on tumor associated macrophages. 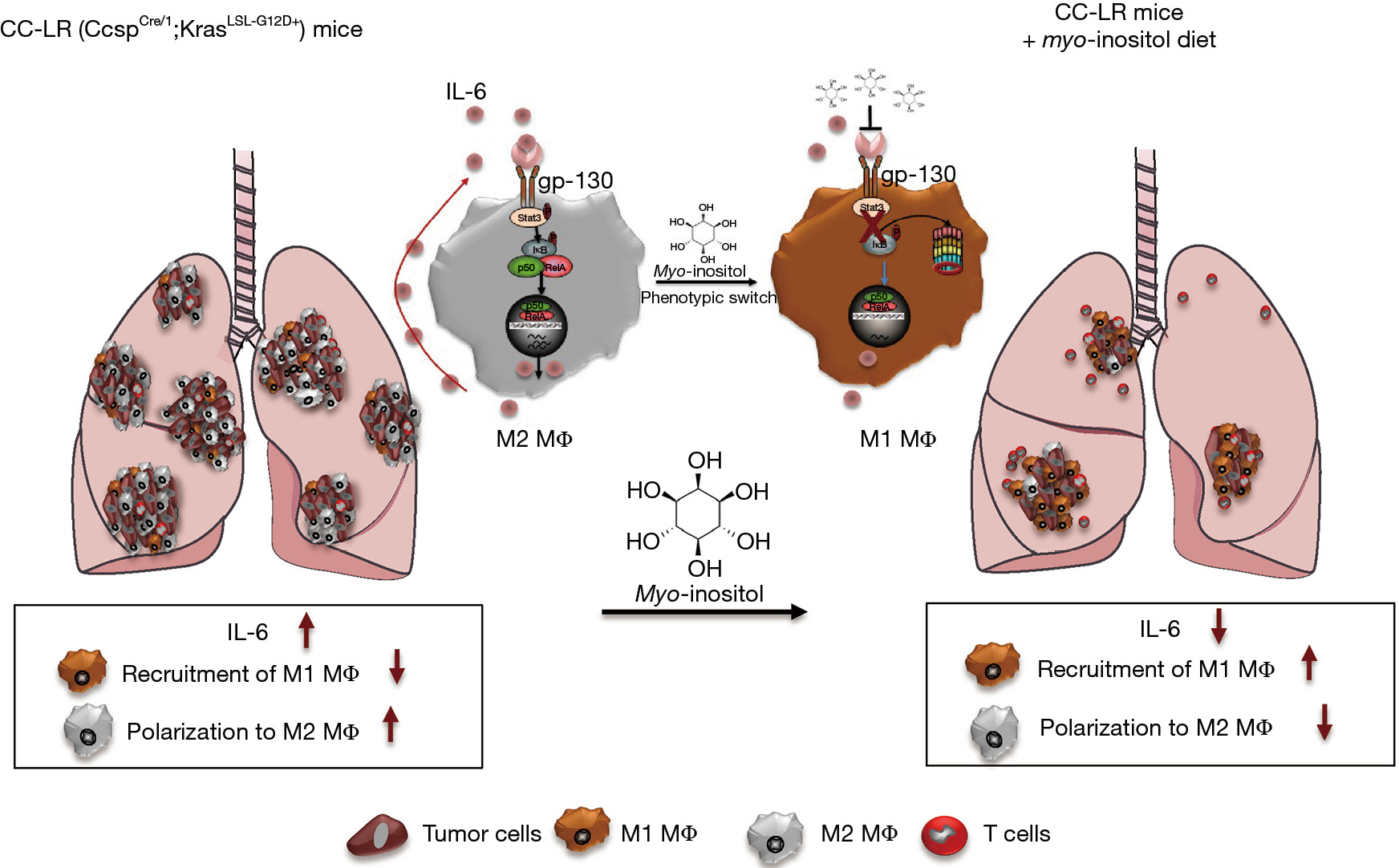 Expectedly, there was a significant decrease in total F4/80-positive macrophages within the tumor microenvironment when animals were fed on myo-inositol diet. Upon further analyses, it was determined that myo-inositol substantially increased the anti-tumorigenic M1-like macrophages as defined by CD45+F/80+Ly6C−MHCII+ phenotype albeit no significant changes in M2-like macrophages in CC-LR mice (Figure 1). Consistent with the phenotypic switch, myo-inositol also reduced the IL-6 secretion from all macrophage subtypes.

Promising preclinical data such as a 53% decrease in pulmonary tumor formation when myo-inositol was given to benzo(a)pyrene exposed A/J mice (20), eventually lead to a phase I clinical trial (21). In this study, current and former smokers with more than 30 pack-year smoking history, and bronchial dysplasia were enrolled. The maximum tolerated dose of myo-inositol was found to be 18 g/d and the most frequently reported side effects were flatulence, loose stool, or diarrhea. Interestingly, there was increase in regression rates and reduction in progression rates of dysplasia. The encouraging positive results prompted the same group to design randomized, double-blind, placebo-controlled phase IIb clinical trial (22). This trial had the same patient population who received 18 g/d for 6 months. Bronchoscopy with bronchioalveolar lavage (BAL), brushing and multi-site biopsy were performed as well as spiral chest computed tomography. A sample size of 100 evaluable participants was needed to provide an 80% power to detect 30% difference in the dysplasia response rates between the two groups. Unfortunately, the trial was closed early due to poor accrual with 85 patients enrolled and only 74 evaluable (38 myo-inositol and 36 placebo). The complete response rate was 26.3% in the myo-inositol group and 13.9% in the placebo group; while the progression rate was 47.4% and 33.3%, respectively. Thus, there was no statistically significant benefit from the use of myo-inositol in the group. However, through the biomarker analysis the study provided valuable insights on the biological impact of myo-inositol. There was decrease in Ki-67 expression in dysplastic tissue; reduced IL-6/proinflammatory cytokines levels in BAL; as well as decrease in PI3K gene expression signature. However, there was no evaluation of the tissue microenvironment or its immune profile characterization.

In summary, while current study by Unver et al. corroborated the earlier findings in that the myo-inositol may have chemopreventive utility in preventing lung cancer development, it provides another important layer of mechanistic insights in this process. In recent years, we have seen remarkable long-lasting responses using the check point blockade inhibitors in hard to treat malignancies such as NSCLC and melanoma. Therefore, chemopreventive agents with the ability to induce the phenotypic switching and recruitment and of macrophages with anti-tumor immune responses have major clinical implications.