Caso et al. reported their outcomes of minimally invasive sleeve resection (1). Although the cohort is small, their outcomes were feasible and comparable to those of the open approach. However, will minimally invasive sleeve resection really become the next trend for treating advanced lung cancer, as is the case for video-assisted thoracoscopic surgery (VATS) lobectomy for early stage lung cancer?

The data by Caso et al. have shown that short- and long-term outcomes of minimally invasive sleeve resection are potentially acceptable. However, it included heterogeneous types of patients, such as age, tumor histology and tumor extension, and we think the poor long-term outcome for lung cancer is disturbing, especially for adenocarcinoma. On the contrary, it is interesting that the outcomes are good for diseases that require only a minimal degree of lymph node dissection, such as carcinoid, adenoid cystic carcinoma, and metastatic lung tumors. We speculate that adequate and sufficient lymph node dissection for advanced lung cancers have led to the good long-term prognosis after sleeve resection. Since sleeve resection is usually required for advanced-stage lung cancers, the surgeons are required to perform not only sufficient lymph node dissection but also to preserve adequate blood flow to the bronchial anastomosis site. This is one reason why Japanese surgeon may prefer to do a sleeve resection by open thoracotomy rather than by minimally invasive approach. The concept of sufficient lymph node dissection with concomitant preservation of adequate blood flow is conflicting and the procedure thus requires a subtler technique and careful attention when compared to lobectomy.

Nonetheless, as shown in this paper by Caso et al., minimally invasive sleeve resection can be a suitable procedure for diseases that require only a minimal degree of lymph node dissection such as carcinoid, adenoid cystic carcinoma, and metastatic lung tumors. Furthermore, although there were only 2 cases of RATS sleeve resection in this study, the RATS approach has the potential to offer a similar level of lymph node dissection and residual blood flow to the anastomosis site, even when compared with the open approach. From this point of view, RATS may have to be considered separately from VATS, and it may become the future trend in this field of minimally invasive surgery.

Furthermore, Caso et al. proposed to do the anastomosis by running suture using absorbable thread. We agree with the use of absorbable thread which is also widely used in Japan. However, the running suture method is not common amongst Japanese thoracic surgeons operating for lung cancer. The reason is mainly oncological, that is, when the lung cancer stage is advanced, it requires more extended lung resection and lymph node dissection. Therefore, although, the running suture method may allow easier suturing of the deepest point, simpler handling of threads, and shorter suturing time. Japanese surgeons prefer the interrupted suture method because it is more advantageous when adjusting difference in bronchus diameter and preserving blood flow. On the contrary, running suture is often used during lung transplant, because transplant does not require extensive lymph node dissection and the bronchus does not often need adjustment of diameter during anastomosis. For these reasons, the use of a hybrid anastomosis is rapidly gaining popularity in Japan (16). For the hybrid method, the deepest anastomosis point is anastomosed by running suture up to two fifths or half of the bronchus and the remaining bronchus is anastomosed by interrupted sutures (Figure 1). The hybrid method enables not only easier and quicker suturing for the deepest part of the anastomosis, but also allows diameter adjustment and better blood flow for the shallow part of the anastomosis. 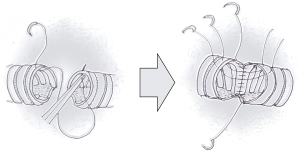 Figure 1 Diagrams of the surgical procedures for hybrid anastomosis. Approximately two-fifths up to half of the bronchus is sewn by running suture using 4-0 monofilament absorbable thread, and the remaining bronchus is sewn up by interrupted sutures.