Within the last three decades, the use of video-assisted thoracoscopic surgery (VATS) has evolved from initial observation and biopsy to surgical resection and reconstruction (1-5). In 1992, the first VATS lobectomy incorporating anatomic hilar dissection was performed. As the technology has continued to improve, it is now applied in more surgical fields, such as lobar sleeve resection, pulmonary artery repair, and even tracheal and carinal reconstruction (6-8). The utilization of VATS has also increased due to its attractiveness as a minimally invasive modality with significantly reduced postoperative complications and length of hospital stay (9-12).

Despite these improvements, however, conversions to open thoracotomies occasionally occur, with an incidence rate ranging from 2% to 20% (13). The most common reasons for this include unexpected vessel injuries and uncontrollable bleeding, intense hilar adhesions, and extensive disease progression to the hilum (14). Mal-manipulation of the hilar lymph nodes frequently leads to arterial injury and massive bleeding, which in most circumstances requires open thoracotomy for bleeding control. In a case series of 232 VATS lobectomies, 40% (6/15) of the conversions occurred after impairment of the pulmonary artery and difficult lymph node management (15).

In this paper, we introduce a novel surgical technique for the safe management of calcified hilar lymph nodes. Below, we describe the method in detail, as well as the results of its clinical application to a consecutive case series.

The 12 patients in this study underwent an initial case evaluation for the appropriateness of conducting the VATS operation. When lung cancer of a radiologically solid type was strongly suspected, remote metastasis was excluded by the results of a whole-body bone scan, abdominal ultrasound examination, brain MRI, and enhanced chest computed tomography (CT) scan. Alternatively, a positron emission tomography (PET)-CT was performed. In the presence of N2 disease, 2–4 cycles of new-adjuvant chemotherapy were generally suggested, followed by re-evaluation for surgery.

A total of 12 patients were enrolled in this study upon discovery of calcified hilar lymph nodes during the operation, and the pulmonary artery was determined to be not mobilizable by the conventional technique. To proceed with the anatomical lobectomy, the new technique was then initiated.

Although CT films were regularly evaluated and pre-operative consultations occurred among senior surgeons in our institute, the characteristic findings of hilar nodal calcifications were generally omitted due to the technical difficulty of their evaluation. As such, their presence was more often an incidental finding during an operation and was reliant on the operative experience of the respective surgeon. We postoperatively reviewed radiological images in this study and then produced a retrospective summarization.

The patients were intubated with a double lumen tube after general anesthesia and then placed in the lateral position. Generally, one surgical port is preferred by our institute at the 4th or 5th intercostal space along the ante-axillary line. After entering the chest cavity, we exposed and then dissected the target hilum for the lobectomy. The conventional flowchart indicates “one-direction” dissection, which starts by stapling the pulmonary vein. Next, using energy instruments, either the lobar bronchus or the branches of the lobar pulmonary artery are dissected and well exposed, which is then closed with a stapler. Fissures are usually stapled last before removal of the specimen.

In the presence of calcified hilar lymph nodes, dissection of the target artery or bronchus is challenging. It is technically impossible to find adipose space between the nodes and the artery, which will result in a torn vessel if the surgeon attempts to free the vessel using blunt forceps. When attempting to open the vascular sheath, dissection may also tear the vessels due to the tenderness of the artery wall, which is a consequence of nodal compression. It is also impossible to expose the back side of vessels during this step. Seemingly, the only recourse is to control the trunk of the main artery. Arterial injury always occurs at the deepest corner of vessel exposure, which makes it technically impossible to repair in the absence of adequate bleeding control.

The essence of this novel operative technique is its focus on using sharp dissection to find the right extra-bronchial space, while keeping the artery intact with the calcified nodes. Before employing this technique, the lymph nodes must first be biopsied and sent for frozen section. With a negative result, the hilum can then be anatomically dissected as follows.

Figures 1,2 show the details of this technique. When using scissors, adhesiolysis is practically safe along the bronchus. The use of an electrode or energy harmony device is generally not recommended, but if applied it must be handled with extreme caution. Generally, there are two dissection techniques. The first is to suture across the nodes and then tie the vessel branches (Figure 1). The underlying requisite is only that the artery branch is small (e.g., the ascending branch of the upper lobe) and well exposed by more than 2/3 of its circumference. This procedure can be safely and repeatedly adjusted if the needle accidentally goes straight across the vessel on the first attempt, which is usually indicated by blood oozing from the needle holes. After tying the artery, scissors are used to free the vessel from the bronchus along with the lymph nodes. The lymph node, in this step, is gradually transected until the scissors meet the bronchus. Then, the scissors should be heading downwards along the bronchus wall, meeting the level of bronchial bifurcates. 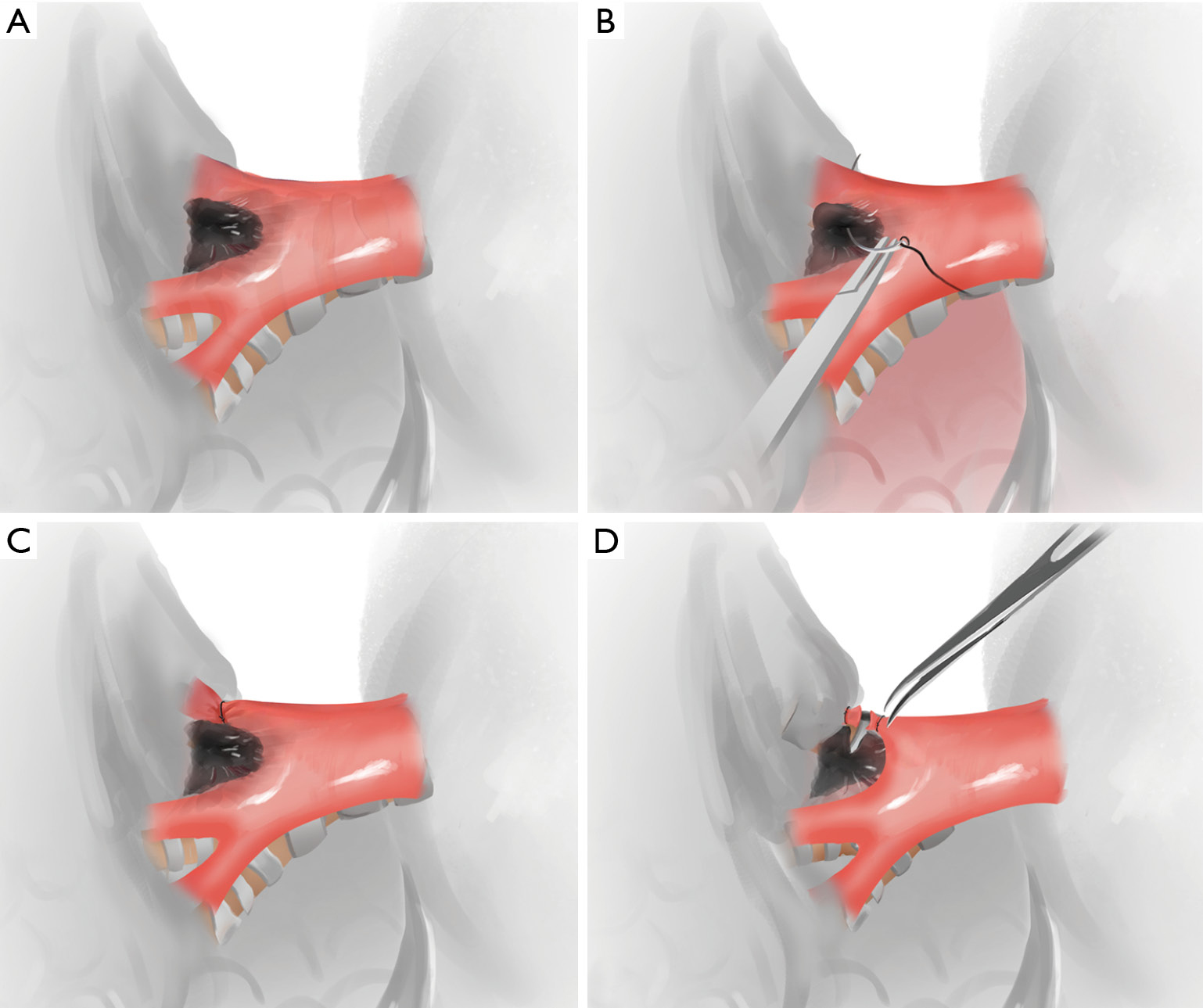 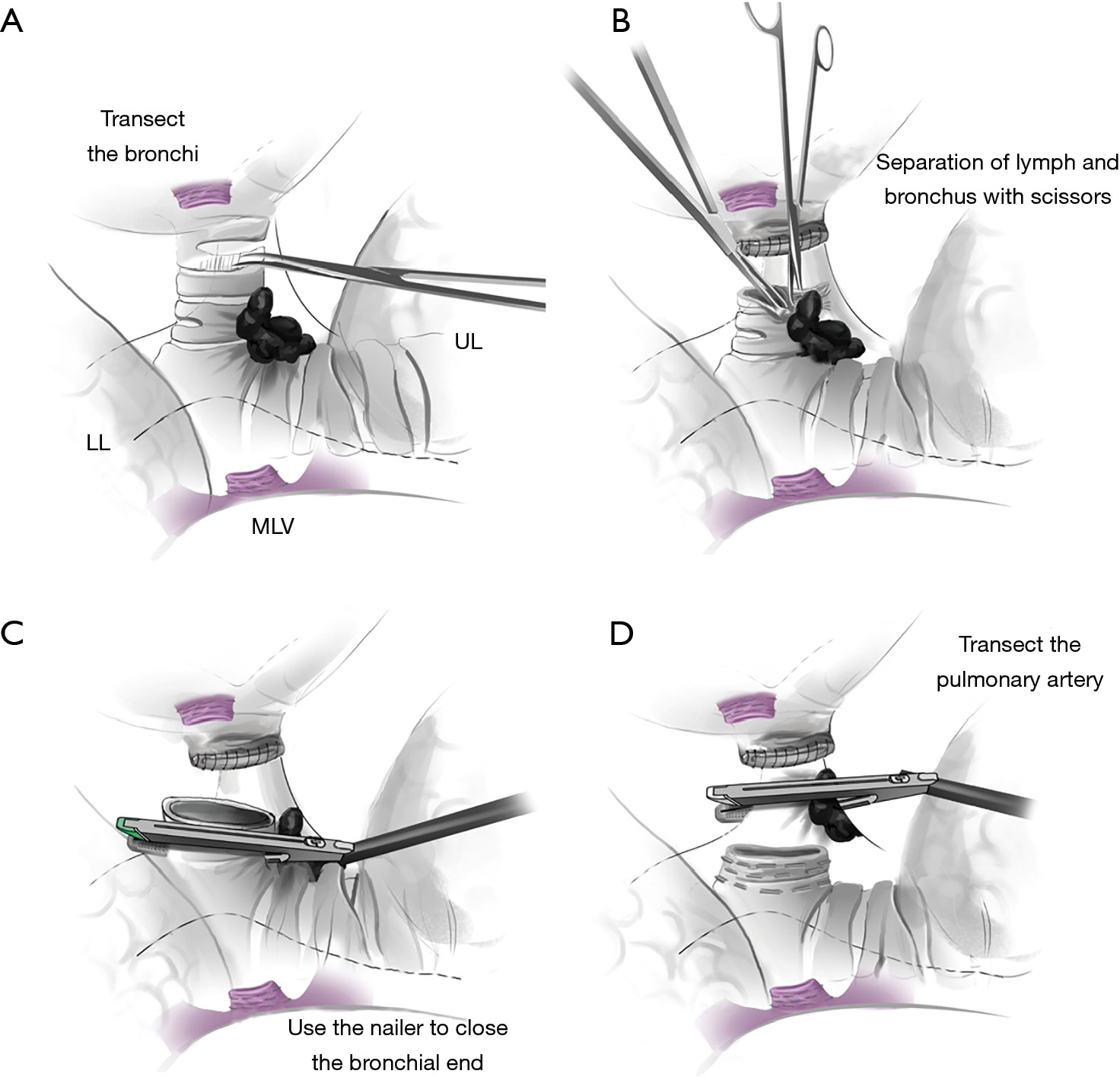 The second method is applied when dissecting the lobar bronchus, or when the artery branch is not adequately exposed (>1/3 of its circumference remains unexposed) (Figure 2). Firstly, the segmental bronchi were transected where caution must be taken to secure an adequate tumor margin. Then, the space between the bronchus and node could be clearly observed. The nodes provided a heavy barrier thus preventing the artery from incidental injury. The scissors, then, go downward to the lobar origin until the pulmonary artery trunk is completely freed. Since the calcified node is now left on the vessel branch, blue staples are preferred for transecting the pulmonary artery. After removal of the specimen, the stump of the lobar bronchus can then be easily closed either with a stapler or absorbable suture, depending on the length of the stump (Figure 2).

The remaining surgical manipulations, including lymph node dissection or sampling, bronchial stump reinforcement if necessary, and chest tube placement, are performed in the routine manner. 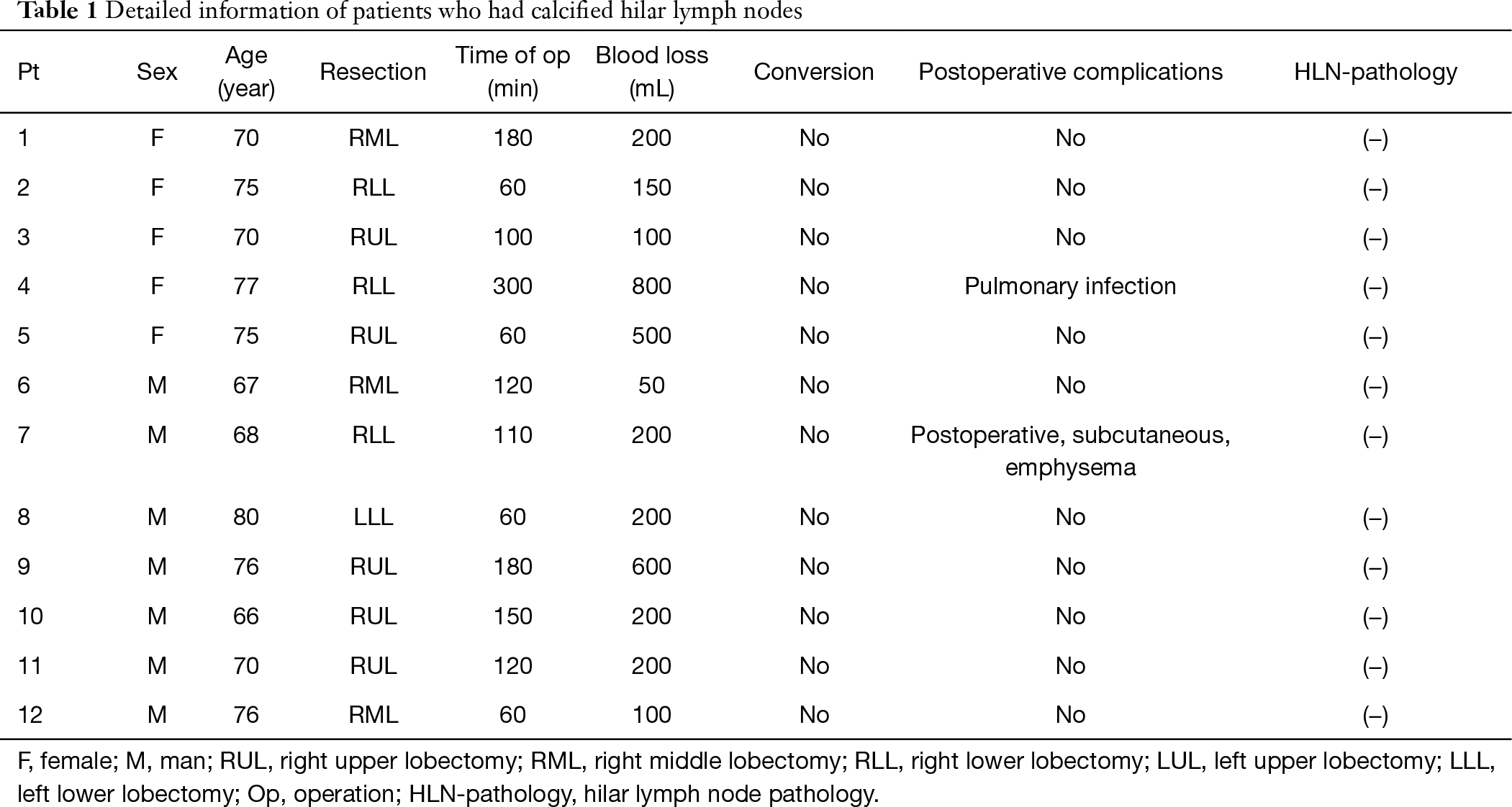 A retrospective review of the hilar lymph nodes on CT images proved unremarkable. High-density calcification was confirmed only occasionally in two cases. More commonly, the hilar nodes manifested as irregular, granular, or nodular shadows with very close adherence to the lobar bronchus over a wide range of contact. The fat interspace between the nodes and pulmonary artery was undiscernible in all cases. We noted no obvious nodal bulging or compressions onto the artery and no heterogeneous density changes in the nodes.

Ten patients were provided with uniportal access to the chest cavity and the other two had two-port incisions, due to their extensive pleural adhesions. All the target hilar lymph nodes were negative by frozen section, and based on these results, we used the proposed technique without resection of the calcified nodes. In all 12 cases, there were no difficulties in handling the veins; all the lobar veins were stapled in the routine manner. The lobar bronchus was stapled in 10 cases, and were closed with 4-0 absorbable sutures in the other two cases. All the operations proceeded generally smoothly with an average operative time of 125 [60–300] minutes. The mean blood loss was 275 [50–800] mL.

Few post-operative complications occurred; there was only a pulmonary infection and a subcutaneous emphysema, which were resolved with routine antibiotics application. The average hospitalization time was 5.7 [3–14] days. Final pathology results indicated early-stage adenocarcinomas in all 12 cases (4 at pT1bN0M0, 3 at pT1bN0M0 pT1cN0M0, 2 at pT2aN0M0, and 3 at pT2bN0M0).

Calcified hilar lymph nodes, which are also referred to as “nail lymph nodes”, have been a critical factor in conversion to open thoracic surgery due to its characteristic features of hard, strong adhesions closely clinging to the blood vessel, which prevent their separation (13-16). The most common reasons for their formation include: senile tuberculosis, recurrent nodal inflammation subsequent to pulmonary fungus infection, chronic bronchitis, bronchiectasis, and chronic obstructive pulmonary disease (16-20). Smoking and industrial waste gas, which are also associated with chronic inflammation, are aggravating factors (21,22).

The presence of calcified hilar lymph nodes makes thoracoscopic hilar management a huge challenge. In 2013, Hanna reported that the conversion rate reached 25–40% because of hilar lymph node calcification and adhesion, which is associated with significantly prolonged operation and hospitalization times (23). Samson also concluded that the calcification score of hilar lymph nodes was the main forecast factor of transitioning to thoracotomy (24). The underlying reason for this challenge was the encircling of the bronchi or artery without any loose interspace, which frequently results in tearing of the pulmonary artery and massive bleeding (25). Therefore, the routine dissection of the bronchus or artery often fails in the presence of benign sticky or inflammatory hilar nodes. In contrast with hilar tumorous invasions, en-bloc resection and reconstruction are necessary in this case, without requiring dissection of the lobar hilum.

There are also some other technical manipulation options, such as the “vascular, anatomy, lymph node and technical (VALT) Open” technique proposed by Gazala and associates (13). This technique is used to repair ruptured blood vessels and avoid conversions and addresses the timing of conversions. Another method is to control the main trunk beforehand and free the artery branch using sharp dissection. Mechanical tear of the artery may then be repaired using 5-0 non-absorbable sutures. This technique, however, requires additional mobilization of the artery trunk and distal branch, and therefore increases the technical complexity as well as the operative risk. The blocking device in the thorax may also impair later surgical thoracoscopic manipulations, especially those with a one-port incision.

In this paper, for the first time, we introduced a practical, safe, and efficient hilum management technique involving no vessel blockage or plastic reconstruction. The key maneuver is to locate the right interspace between the bronchial wall and lymph nodes. Therefore, integration of the artery is well maintained because the nodes remain intact along with the artery.

Funding: This study was supported by award (16CR3018A) from the Shanghai Hospital Development Center.