Timely and successful revascularization through primary percutaneous coronary intervention (PPCI) is the most effective treatment strategy to reduce the range of myocardial infarction (MI). After the recanalization of culprit vessels, approximately 25–37% of patients would develop myocardial reperfusion disorder and even no-reflow (1). The fundamental cause is the damage to the microcirculation of the myocardium. In recent years, research on the prevention and treatment of myocardial microcirculation injury has continuously progressed (2). Related studies have revealed that nicorandil has a protective effect on ischemic myocardium, and it can increase myocardial blood flow perfusion and improve clinical prognosis (3-6). However, there was no unified recommendation for the time and scheme of drug use (7-9). In the present study, patients with acute ST-segment elevation myocardial infarction (STEMI), who were receiving PPCI, were treated with the intracoronary administration and peripheral venous injection of nicorandil to evaluate its effect on myocardial microcirculation and short-term prognosis in STEMI patients.

The present study is a single-center, prospective, randomized, single-blinded and blank-controlled study. Consecutive STEMI patients who received PPCI in the Heart Center of Tianjin Third Central Hospital from January 2016 to August 2017 were included into the present study. In order to ensure the comparability of experimental data, patients intervened by the same physician were selected. Finally, 140 eligible subjects were included.

Inclusion criteria: all patients who were definitely diagnosed with STEMI and received emergency coronary angiography after the onset of the disease were included. The angiography revealed that the thrombolysis in myocardial infarction (TIMI) grades of the culprit vessels were within grades 0–1. The STEMI diagnostic criteria were with reference to ESC 2012 (10). Exclusion criteria: patients who previously received coronary stent implantation; patients with a systolic blood pressure ≤90 mmHg or a diastolic blood pressure ≤60 mmHg; patients with liver dysfunction (serum ALT or total bilirubin >3 times of the normal upper limit) and renal insufficiency (serum creatinine >1.5 times of the normal upper limit); patients who were presently receiving nicorandil; patients who had undergone coronary artery bypass grafting (CABG); patients with prior MI; patients with cardiogenic shock.

The present study was conducted in accordance with the declaration of Helsinki and approved by the Ethics Committee of our hospital. All subjects and their families provided a signed informed consent.

The information of patients included their general information (gender and age), the risk factors of coronary heart disease and complicated diseases (hypertension, diabetes, hyperlipidemia, smoking and drinking history, family history of coronary heart disease, atrial fibrillation and stroke), the characteristics of the disease, and the lesions in the culprit vessels (interval from the appearance of symptoms to revascularization, the location of the culprit vessel, the number of the sites of the lesions, the grade of TIMI blood flow in the culprit vessels before the recanalization, and the implantation of stents).

The CTFC was measured according to the method of Gibson et al. to determine blood flow at the time of coronary angiography. The cine frame counts derived from the injection of contrast medium to the peripheral landmark were measured on the coronary angiogram. The frame rate was measured at 30 frames/s. Coronary angiography was performed at a 30° right anterior oblique/caudal projection angle for the left anterior descending and left circumflex arteries and a 60° or 30° left anterior oblique/cranial projection angle for the right coronary artery. The CTFC was measured by a physician without knowledge of the patient group allocation.

Secondary observation indexes: (I) major adverse cardiovascular events (MACE) during the period of hospitalization, including all-cause mortality, chest pain (the symptom of persistent chest pain for more than 30 minutes), malignant arrhythmia (ventricular tachycardia/ventricular fibrillation/II–III degree atrioventricular block, repeat revascularization and deterioration of cardiac function (Killip classification increased by grade 1 or above). The MACE was reported to the researcher by the physician (not participating in the study). (II) The left ventricular ejection fraction (LVEF) was measured within 1 week after PPCI. 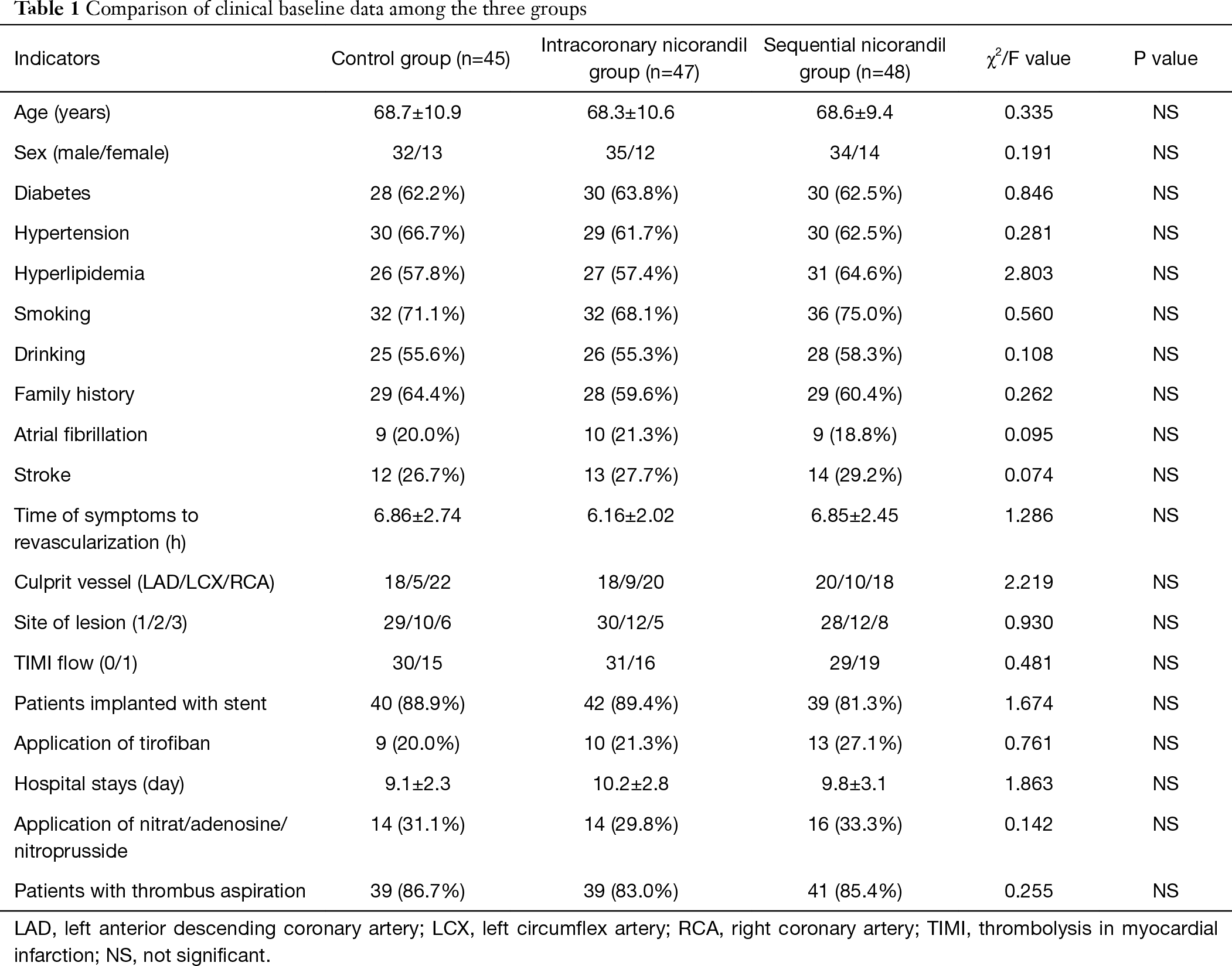 The mean age of patients enrolled in the present study was 68.5±10.3 years old (ranged, 40–80 years old). Among these patients, 101 patients (72.1%) were male and 39 patients (27.9%) were female. There’re 13.6% (n=19) of patients with no stent in the culprit artery. Ten of them had PTCA without stent, five of them had artery diameter less than 2.5 mm and the other 4 rejected to have stent implantation. For the risk factors of coronary heart disease, 88 patients (62.9%) had diabetes, 89 patients (63.6%) had hypertension, 84 patients (60%) had hyperlipidemia, 100 patients (71.4%) had a history of smoking, 79 patients (56.4%) had a history of drinking, and 86 patients (61.4%) had a family history of coronary heart disease. Furthermore, 28 (20%) patients had complicated diseases that included atrial fibrillation, and 39 patients had stroke (27.9%). For the characteristics of onset, the interval from the appearance of symptoms to revascularization was 6.62±2.42 h. Furthermore, the culprit vessel was the anterior descending branch or left main trunk-anterior descending branch in 56 patients (40%), the circumflex branch in 24 patients (17.1%), and the right coronary artery in 60 patients (42.9%). In addition, 87 patients (62.1%) had single-vessel disease, 34 patients (24.3%) had double-vessel disease, 19 patients (13.6%) had triple vessel disease. Furthermore, 90 patients (64.3%) had TIMI-0 flow, and 50 patients (35.7%) had TIMI-1 flow. Moreover, 121 patients (86.4%) were implanted with stents during PPCI. Differences in baseline data, risk factors of coronary heart disease, complicated diseases and the characteristics of onset among the three groups were not statistically significant.

Comparison of changes in perioperative blood pressure, heart rate and liver and kidney function among the three groups (Table 2) 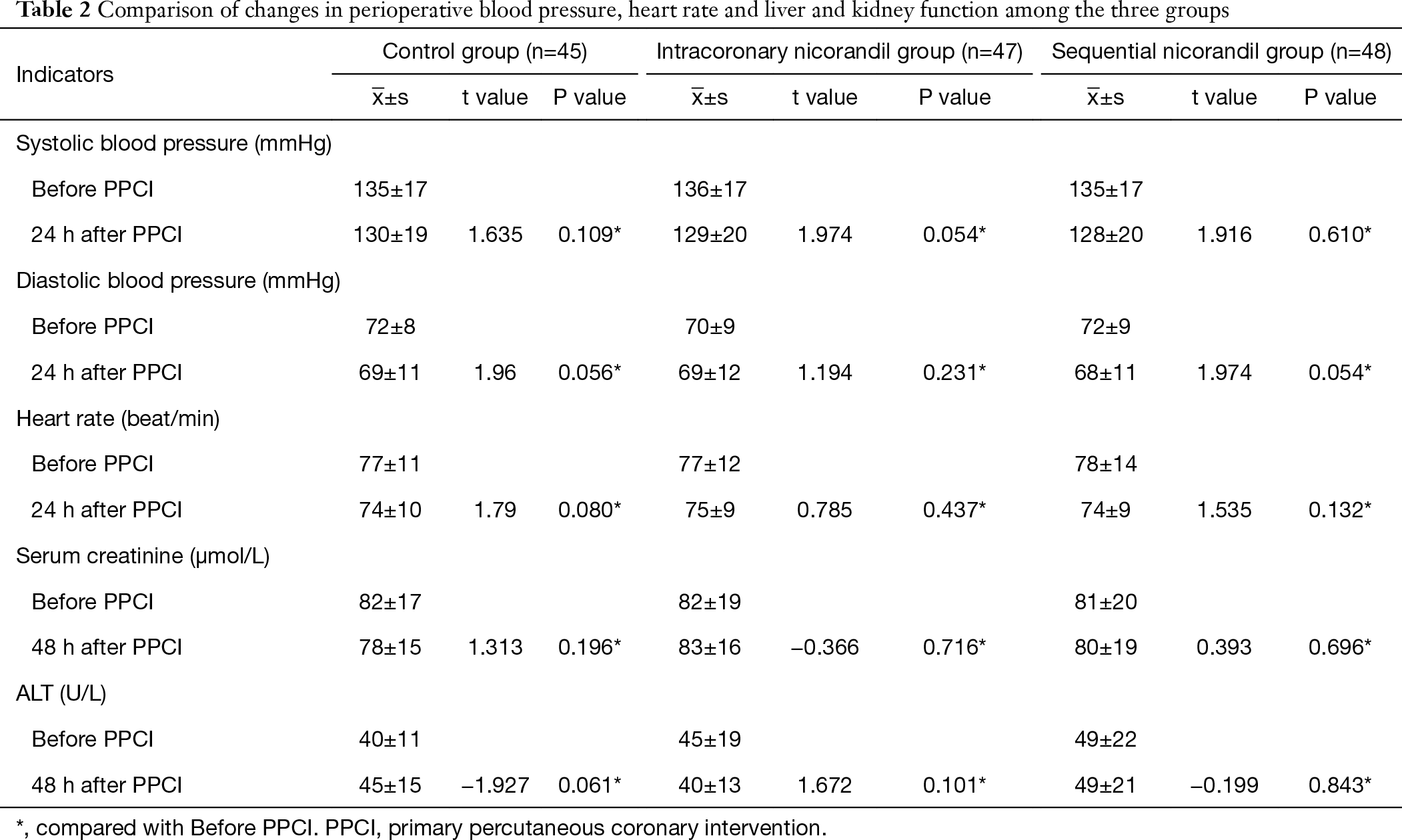 These three groups of patients were self-controlled. Blood pressure and heart rate before PPCI, and at 24 h after PPCI, and serum levels of creatinine and glutamic-pyruvic transaminase before and at 48 h after PPCI were compared. The differences were not statistically significant.

Timely myocardial reperfusion realized by means of PPCI is an effective treatment strategy to reduce the mortality of AMI. However, even if the culprit vessel is recanalized and normal blood flow is recovered some patients still feel chest pain, and the ST elevation is not complete resolution, even serious clinical manifestations such as malignant arrhythmia and heart failure occur. This is closely related to coronary microvascular dysfunction caused by reperfusion injury (11,12). This phenomenon reduces the benefit of PCI. In the past 10 or more years, a large number of clinical trials on glycoprotein IIb/IIIa receptor antagonists, nitrates, calcium antagonists and other drugs have been carried out to solve the above-mentioned problems. However, the effectiveness of these drugs has not been conclusive.

In recent years, some scholars have applied nicorandil in the perioperative period of PCI. These results revealed that nicorandil played a positive role in improving coronary microcirculation (13,14) in patients with STEMI, lowering the incidence of no-reflow or slow flow, reducing the infarct area of patients with AMI, and protecting ischemic myocardium (15,16). Furthermore, it has the vasodilator effect of nitrates, and can dilate the coronary artery and peripheral veins. In addition, it can inhibit oxidative stress in vascular endothelial cells (17), reduce the proliferation of vascular smooth muscle cells, and improve vascular endothelial function (18,19). Myocardial reperfusion injury further causes coronary microvascular dysfunction and subsequently, which leads to a series of adverse events. Nicorandil could specifically dilate small coronary arteries, improve microcirculation, reduce reperfusion injury (20,21).

In the evaluation of medication safety, the differences in changes in perioperative blood pressure, heart rate and liver and kidney function among the three groups were not statistically significant. This suggests that nicorandil has good safety in clinical applications.

Our study showed that TIMI grade 3 blood flow rate, complete STR rate and myocardial enzyme peak time after PCI were worse than most published data. We considered the following possible reasons: (I) Patient visit time is too long. (II) At that time, the hospital did not set up a chest pain center. After the patient went to the hospital, he routinely received the CCU ward, and then went to the catheter room for interventional treatment, which led to the extension of DtoB (door to balloon) time. The average time from onset to blood vessel opening was close to 7 h, it may cause increased thrombus composition, more patients with slow blood flow. (III) Because of the higher age of the selected patients, there is no routine use of glycoprotein IIb/IIIa antagonists to reduce the risk of bleeding, it may cause insufficient antithrombotic activity and increase the risk of no reflow. (IV) Our hospital is located in the old city center of Hedong District, Tianjin City. The residents around us are mainly old, so there are many serious complications. In addition, our hospital is a comprehensive hospital. Patients with single disease will choose a special heart hospital within the same distance, and patients with complex disease will first choose our hospital after the onset. This caused most of the patients admitted to our department of cardiology to be older, with many complications. This is an important reason why the above-mentioned therapeutic indicators after PCI in this study will be worse than most published data. At present, our hospital has set up a chest pain center, which greatly shortens the time of door to balloon (D-to-B). We have plans to count the above indicators in the next study to see if they have been effectively improved.

In summary, the results of the present study suggest that the intracoronary and peripheral venous use of nicorandil is helpful to realize the revascularization of the infarct area, reduce the incidence of slow flow/no-reflow, and limits the infarct area of STEMI patients after PPCI. Compared with intracoronary use alone, its subsequent use can better improve myocardial microcirculation, increase myocardial blood flow perfusion, and improve short-term prognosis. The present study provides reference basis for the administration timing and medication scheme of nicorandil. Due to the small sample size and short observation period, its long-term curative effect and prognosis need to be determined through further clinical trials.

Funding: This study was supported by Tianjin Science and Technology Project (16ZXMJSY00200).

Ethical Statement: The protocol was approved by the ethics committee of Third Central Hospital of Tianjin. Informed consent was obtained from each patient or from their nearest relatives.