All candidate patients suffered an ischaemic cardiomyopathy after anteroseptal myocardial infarction and consequent evolution into a severely dilated LV with an anteroseptal transmural scar.

The selection criteria of our studied patients mirror the major ones of the CONFIGURE-HF trial, a multicenter, prospective, single-armed study which has been designed to establish the efficacy and safety of the new LIVE system for LV volume reduction (11-15), thus being: (I) LV ejection fraction (EF) <0.35; (II) LV end-systolic volume index (LVESVI) >60 mL/m2 (preferably <120 mL/m2); (III) severe HF, in terms of New York Heart Association (NYHA) functional class III–IV, despite optimal medical therapy for at least 90 days; (IV) age 18 to 75 years; (V) no infarction within three months of operation; (VI) referral for ventricular reshaping operation. Major exclusion criteria, in accordance to the trial, were: (I) need for concomitant mitral valve surgery; (II) the presence of intracardiac thrombus; (III) contraindication for warfarin therapy. Additionally, we excluded a severe multiple valvular pathology, needing eventual associated valve repair or replacement, a severe preoperative right ventricle (RV) dysfunction. All patients in this study were contraindicated to standard surgery due to elevated risk (high EuroScore II) according to a pre-procedural multidisciplinary evaluation (Table 1).

The study was approved by our institutional review board.

The Revivent TC™ system consists of four components: (I) a delivery system; (II) the implantable anchor elements; (III) a force gauge to control the amount of compression applied to the anchors when apposing the LV walls; and (IV) a retrieval system (11-15). The implantable anchors are composed of titanium and covered by polyester cloth; one is a hinged (“internal”) anchor that passes through a low-proﬁle catheter to the right side of the septum, and the other, a locking (“external”) anchor deployed in the LV epicardial position (Figures 1,2). 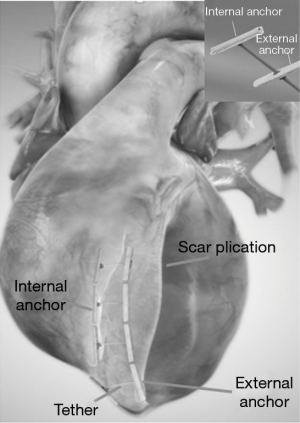 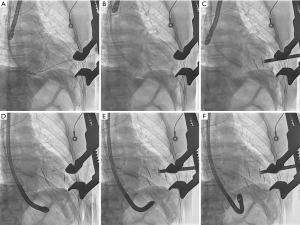 Plication and exclusion of LV scar is achieved using paired, above mentioned, microanchors, fixed by a PEEK (Poly-Ether-Ether-Ketone) tether to provide a longitudinal line of apposition between the LV anterolateral wall and the anterior septum (Figures 1-4) (15). Thus, one anchor is implanted surgically and directly onto the scarred portion of the LV epicardium while the other is deployed through a percutaneously placed catheter onto, endovascularly, the right side of the interventricular septum (via internal jugular vein approach). The most apical part of the LV (beyond the right ventricle apex) is excluded by an epicardial-only anchor pair. An external-only approach can also be offered to patients with large apical-anterior-inferior scars but lacking septal involvement, and in case of difficult or not feasible endovascular approach. 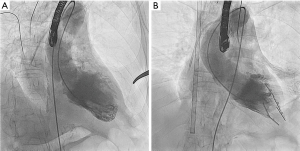 Figure 3 Intra-operative angiographic view before (Panel A) and after (Panel B) Revivent™ anchors placement.

The surgical approach relies on a 5-cm left-sided minithoracotomy after properly assessing the position of LV apex. For safety, arterial and venous sheaths are placed into both femoral artery and vein, respectively, thus being ready for a quick cannulas insertion in the case of need of extracorporeal circulation installation.

Our preferred setting for LIVE procedure is the hybrid operating room (OR) (11-15) which provides advanced imaging capabilities in terms of fluoroscopy and echocardiography guidance.

After surgery, the patients are treated with warfarin for 3 months, in terms of anticoagulation management, followed by cardioaspirin mantainance only, thereafter.

Procedural success was fully accomplished. In all patients, a reshaping with total exclusion of the aneurysmatic LV was achieved. A total anchors number of 3.0±0.9 was used (Table 1). Mean skin-to-skin surgical time was 195±115 minutes with a fluoroscopy time of 60:60±45:35 and a dosage (mGy/cm2) of 2,685±2,455 (approximate effective radiation dose of 10 mSv).

In a single patient, the occurrence of RV perforation required correction through a standard sternotomy (Table 2). All patients survived the surgical procedure. The mean duration of intensive care unit stay was 7.8 days (range, 1–22 days), and the mean length of hospital stay was 22.1 days (range, 9–45 days), with no negative sequelae. At discharge, no leakage between the excluded scar and the LV chamber was noticed (Figures 3,4).

Mean follow-up (FU) time was 189.7±104.5 days. Average NYHA functional class at FU was 1.4±0.9 compared to 3.4±0.6 preoperatively (P=0.001). All patients were in satisfactory clinical condition and resumed their own daily activities Echocardiographic monitorings at FU were stable and comparable to the above mentioned results at discharge.

Recently, results from the Surgical Treatment for Ischaemic Heart Failure (STICH) randomized trial showed that patients with a postoperative LVESVI of 70 mL/m2 or less after coronary bypass grafting (CABG) plus SVR resulted to have better outcomes if compared with CABG alone (9,10).

The gold standard treatment for LV adverse remodeling due to ischaemic cardiomyopathy remains the conventional surgical repair (7-10). The Revivent TC™ procedure may be considered an alternative solution for patients desiring early intervention or with a high surgical risk profile and major associated comorbidities, as it does not require LV incision or extracorporeal circulation and is a potentially more rapid procedure. Furthermore, it has potential advantages regarding standard linear resection, as the septum is included in the repair (11-15).

According to the data documented in the LIVE CE (Communauté européenne) marking study (11-15), there is an improvement of LV efficiency with significant reduction of LV volume, increase of LV EF and, in some cases, reduction/resolution of secondary MR owing to re-alignment of the papillary muscles, at mid- and long-term follow-up (6, 12 and 24 months) (14,15). Additionally, a clinical improvement in exercise tolerance and a significant reduction of NYHA functional class is documented (11-15).

Our early results in a limited cohort of patients confirmed that the procedure is effective and results in a significant improvement of LV EF and reduction in LV volumes. We found a significant reduction of LVESVI (Figure 4), and moreover, in all patients, a post-LIVE LVESVI of <60 mL/m2 was achieved thus following the effective goals of SVR as reported by Di Donato et al. (16) and the STICH trial, as well (9,10,15).

Concerning the LV reconstruction, we found no significant change in the SI, similarly to the results reported by the RESTORE group (16,17). This proves that LIVE procedure, as reported by Klein et al. (15), may potentially play a role in reducing both LV long- and short-axis with resulting similar preoperative SI.

Furthermore, important functional MR could be reduced by LIVE procedure since the improvement of both LV systolic function and reduction of LV volumes, as showed significantly in our studied cohort of patients.

Despite all above mentioned promising effects and results, the weak points of LIVE procedure remain the need of a sufficient transmural anteroseptal scar extension for a safe and effective transseptal anchor placement and plication, and the avoidance of a pre-operative small RV, which may lead to a RV restrictive pattern (15).

Additionally, it is important to emphasize the potentially related intraoperative LIVE major adverse events (11-15). Sustained ventricular arrhythmias are often caused by instrumentation of healthy myocardium during anchors implantation thus a primed cardiopulmonary bypass (CPB) machine or extracorporeal membrane oxygenation (ECMO) system ready to be rapidly employed is recommended. Other reported complications are RV perforation, stroke, ventricular septal defect, and tricuspid valve chordae or leaflets damage (15). All above issues may be related to the significant learning curve needed by clinicians and surgeons when initially approaching the procedure.

This is why the Revivent™ procedure requires a well trained and dedicated multidisciplinary ‘heart team’, which includes an interventional cardiologist, a cardiac surgeon, and an echo-cardiographer, experienced in structural interventions (11-15).

Thereafter, we do still have to wait for the results of the ongoing CONFIGURE-HF and the upcoming REVIVE-HF trials (14,15) with longer FU data are necessary to confirm both the durable safety of this novel procedure and the long-term LV effective remodeling, aiming the complete exclusion of the septal scar and dyskinetic apex as only partially demonstrated by the cardiac magnetic resonance studies of small series currently reported (11-15).

This is a retrospective observational study. Although our cohort consists of seven patients, it is one of the largest single centre clinical case series with a significant FU time to report on such a LIVE procedure, so far. Further investigations are still required to conclusively confirm the mid- to long-term benefits of this novel technique. However, early efficacy of LIVE procedure was demonstrated in a high-risk series of patients with clear contraindication to traditional surgery correction (Table 1).

Ethical Statement: The study was approved by our institutional review board.