Approximately 50% of saphenous vein grafts (SVGs) fail by 5 to 10 years post-coronary artery bypass grafting (CABG) and between 20–40% fail within the first year (1,2). While SVG failure can sometimes be silent, when symptomatic events occur, SVG percutaneous coronary intervention (PCI) is often performed. SVG PCI represents approximately 6% of the total PCI volume in the US (3). Given the aggressiveness of SVG atherosclerosis and the high risk for recurrent SVG failure, what are the optimal prevention and treatment options in such patients?

Prevention: use of arterial grafts during CABG

One way to avoid SVG failure is to not use SVGs in the first place during CABG. However, the frequency of bilateral internal mammary artery (BIMA) grafting and of radial artery (RA) grafting during CABG remains low in the US (approximately 5% each) (2). This is at least in part due to conflicting evidence with some, but not all studies showing benefit with BIMA and RA grafts as compared with SVGs (4,5).

In contrast, the recently reported 10-year results from the Arterial Revascularization Trial (ART) did not demonstrate benefit with BIMA vs. single IMA grafting (https://www.escardio.org/The-ESC/Press-Office/Press-releases/ten-year-outcomes-of-the-arterial-revascularisation-trial-revealed-today) (5). In ART 1,548 patients were randomized to BIMA and 1,554 to single IMA grafts. Additional arterial or vein grafts were used at the discretion of the surgeon. At 10-year follow-up, all-cause mortality in the BIMA and single IMA groups was 20.4% and 21.2%, respectively (HR 0.96, 95% CI: 0.82–1.12, P=0.58). The 10-year incidence of the composite endpoint of death from any cause, MI, or stroke was 24.9% and 27.4% in the BIMA and single IMA groups, respectively (HR 0.90, 95% CI: 0.78–1.03, P=0.12). Outcomes were, however, more favorable in patients who had BIMA performed by more experienced surgeons. In an exploratory analysis of ART, patients who received any 2 arterial grafts (IMA or radial) appeared to have lower mortality (HR 0.79, 95% CI: 0.64–0.97) and lower incidence of the composite of death, MI or stroke (HR 0.80, 95% CI: 0.69–0.93) vs. those who had received a single arterial graft. The latter was consistent with another post-hoc analysis of the 5-year ART results, in which use of a RA graft in addition to single IMA or BIMA grafts was associated with lower risk for midterm major adverse cardiac events (8). Interpretation of the ART trial results is challenging, however, because: (I) many patients randomized to BIMA, actually received a single IMA graft and (II) many patients randomized to single IMA graft actually received an additional RA. Use of guideline-directed medications was also high, which may have limited the ability to detect differences and which may not reflect real-world compliance and average physician prescribing patterns in post-CABG patients.

The method of arterial graft harvesting and post-procedural management such as ongoing use of calcium channel blockers (CCB), could further improve arterial graft outcomes: in a study of 732 patients, ongoing CCB use was associated with better RA graft patency (HR, 0.20; 95% CI: 0.08–0.49; P<0.001) (9). Conversely, use of the “no-touch” SVG harvesting technique (harvesting with a small amount of surrounding tissue that decreases SVG injury and the need for manual distention of the SVG) has been associated with better patency (10).

Ultimately, it would seem that arterial grafting should, and could be considered in more patients, depending on the individual’s age/life expectancy, coronary anatomy, and risk for sternal wound infections.

The post-CABG patient with a patent SVG-how do we maintain patency?

When a SVG is plugged into the arterial system, its physiologic milieu changes and it undergoes adaptive remodeling, starting with fibrointimal hyperplasia (11). This hyperplasia forms the nidus for atherosclerosis formation, which is usually established by 5–10 years and is often associated with thrombus and friability (11). Although aspirin and statins have been shown to improve SVG patency, additional treatments may be beneficial (12). There has been support from two studies (Ticagrelor, PLATO; Prasugrel, TRITON-TIMI 38), for improved clinical outcomes in post-ACS patients undergoing CABG when they are treated with novel anti-platelet agents over clopidogrel (12). In a recent study of 231 prior CABG patients, higher circulating PCSK9 levels were associated with higher risk for late SVG degeneration after adjustment for established cardiovascular risk factors (13). The ongoing Alirocumab for Stopping Atherosclerosis Progression in Saphenous Vein Grafts (ASAP-SVG) Pilot Trial (https://clinicaltrials.gov/ct2/show/NCT03542110) is evaluating the effect of alirocumab vs. placebo on intermediate SVG lesion atherosclerotic disease burden as assessed by IVUS after 78 weeks of treatment.

In SVG PCI, prevention and treatment of distal embolization and no reflow are of paramount importance and could be achieved by using intragraft vasodilators and embolic protection devices (EPDs). EPD use carries a class I recommendation in the ACC/AHA PCI guidelines, but was recently downgraded to class IIa in the European Society of Cardiology guidelines, based on observational data that are, however, subject to significant bias.

Stent choice in SVG PCI was recently simplified by the Drug Eluting Stents in Saphenous Vein Graft Angioplasty (DIVA) and the long-term outcomes of the Is Drug-Eluting-Stenting Associated with Improved Results in Coronary Artery Bypass Grafts? Trial (ISAR-CABG) trial, both of which showed no benefit (but also no penalty) with use of DES in SVGs (14,15). In countries where DES are significantly more expensive than BMS, BMS should be used. In countries with similar DES and BMS prices, either is acceptable.

PCI of a degenerated SVG is associated with poor long-term outcomes, regardless of the strategy and technique used. PCI of the native vessel that supplies the same territory as the failing SVG is likely superior (18). However, native coronary artery PCI can be challenging in prior CABG patients due to anatomical limitations, clinical acuity, or operator skillset and equipment required. Figure 1 presents a decision tree with treatment options for failing SVGs depending on the complexity of the SVG and the corresponding native coronary artery lesion(s). In addition to acute native vessel PCI, the concept of acute SVG PCI with staged native vessel PCI (when complex) has been proposed, and may represent another avenue by which to provide more durable results, particularly in patients who have had multiple within-graft interventions (3). As operators gain more experience in complex PCI, when the risk/benefit ratio is favorable, native vessel PCI, may become an increasingly appealing option in patients presenting with SVG failure. 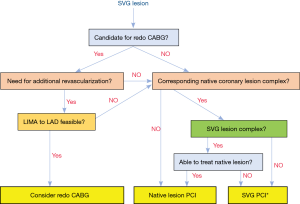