Chest wall trauma is common around the world. According to recently reported data, chest trauma accounted for over 25% of all trauma cases, and rib fracture was the most frequent chest trauma. In the United States (US), approximately 500,000 patients annually suffer from chest wall trauma, approximately 60% of whom have rib fractures (1,2). Since the population of China is much bigger, and the traffic system is still not completely developed in certain parts of the country, conservative estimates indicate that the number of rib fracture patients can reach the range of 1,500,000–2,000,000. Some surgical treatment options of severe rib fracture, especially for flail chest, have been implemented for more than 50 years. Over the past 10 years, with the advent of special commercially available rib fracture fixation systems, chest wall stabilization (CWS) appears to be a safe and practical technique. In the beginning of 2018, the Sixth People’s Hospital of Shanghai Jiao Tong University (Shanghai, China), Beijing Jishuitan Hospital (Beijing, China), and the Third Affiliated Hospital of Hebei Medical University jointly launched a study entitled “Survey of surgical treatment for rib fractures” in China. A total number of 414 questionnaires were sent out electronically, or in paper form, of which 371 valid questionnaires were returned, covering all provinces, autonomous regions, and municipalities. Among them, 86.7% were from teaching hospitals, 69.2% from grade III-A hospitals, 15.3% from grade III-B hospitals, 14.8% from grade II-A hospitals, and 0.7% from grade II-B hospitals (of note, grade III-A hospitals are of the highest standard in China). The questionnaire data showed that 95.6% of the hospitals surveyed performed rib fracture fixation surgery, of which 93.2% were performed by thoracic surgeons, whereas the remaining were conducted by surgeons from the departments of orthopedics, trauma, emergency and others. Moreover, 17.3% of the surgeries were jointly carried out by two departments. In 2016, the surveyed hospitals performed approximately 14,500 surgeries for rib fractures, and that volume increased to 17,600 in 2017. In the years 2016 and 2017, eight hospitals implemented such surgeries in more than 500 cases, 39 hospitals in more than 200 cases, and 93 hospitals in over 100 cases. The Shanghai Sixth People’s Hospital had the highest volume, with more than 900 cases. More than 85% of the physicians surveyed considered that CWS could improve respiratory function, reduce pain, decrease pulmonary complications, facilitate early recovery, shorten the duration of treatment (e.g., hospitalization, intensive care unit stay, time on mechanical ventilation, etc.), and restore the shape of the thorax. Meanwhile, we found that 123 hospitals conducted CWS for one fractured rib, whereas 144 hospitals performed the surgery for two fractured ribs. The respondents generally believed that CWS in China was characterized by the following deficiencies: lack of large-scale clinical investigations, and standardization of surgical indications, high expenses for surgical consumable, and wide variations in the quality of care provided among medical centers. Accordingly, we revealed that CWS has been widely performed. Additionally, the absence of standard surgical indications, and the presence of other serious concomitant medical conditions, hinder the achievement of a consensus among surgeons in different fields.

We searched for articles published in Chinese journals by mainland Chinese scholars in the WANFANG database during the past ten years, and found approximately 1,500 articles on CWS, demonstrating the enthusiasm associated with CWS in China. These articles were mainly single-center retrospective studies, with no randomized controlled study. Approximately 70% of the articles were focused on the surgical technique, 20% compared the use of different fixation materials, and less than 10% evaluated the efficacy of surgery. When a similar search was performed for articles published by mainland Chinese scholars in international journals indexed in PubMed, only five articles were identified, of which one was a case report, one introduced a surgical method, and three were retrospective analyses of surgery efficacy. We consider there is room for improvement in the academic research on CWS.

The Department of Thoracic Surgery of the Shanghai Jiao Tong University Affiliated Sixth People’s Hospital annually treated a great number of patients with chest trauma, of which the number of patients with emergency situation is around 5,000 cases/year. In 2007, CWS was initiated, and we simultaneously started relevant clinical research at the same time. Notably, we established a yearly increase in the number of surgeries realized (Figure 1).

A non-randomized study (3) was conducted with 60 patients in a CWS treatment group and 60 patients in a control group (conservative treatment). An average number of eight rib fractures were established in the two groups, approximately 40% of which were flail chest. The authors found more favorable outcomes in the treatment group than in the control group: a shorter mechanical ventilation time, diminished duration of ICU stay and hospitalization, reduction of pain, improvement of dyspnea, and overall lower morbidity. Moreover, another investigation reached a similar conclusion (4). It is noteworthy that most researches with CWS focused on the effects of CWS on flail chest, and whereas the efficacy of CWS on non-flail chest is still controversial. To overcome the aforementioned issues, we initially examined the lung function of 72 patients with isolated rib fractures (non-flail chest; >2 ribs) and compared the results with the lung function of 39 healthy volunteers. We discovered that the patients with multiple rib fractures had significantly reduced lung function (Table 1). 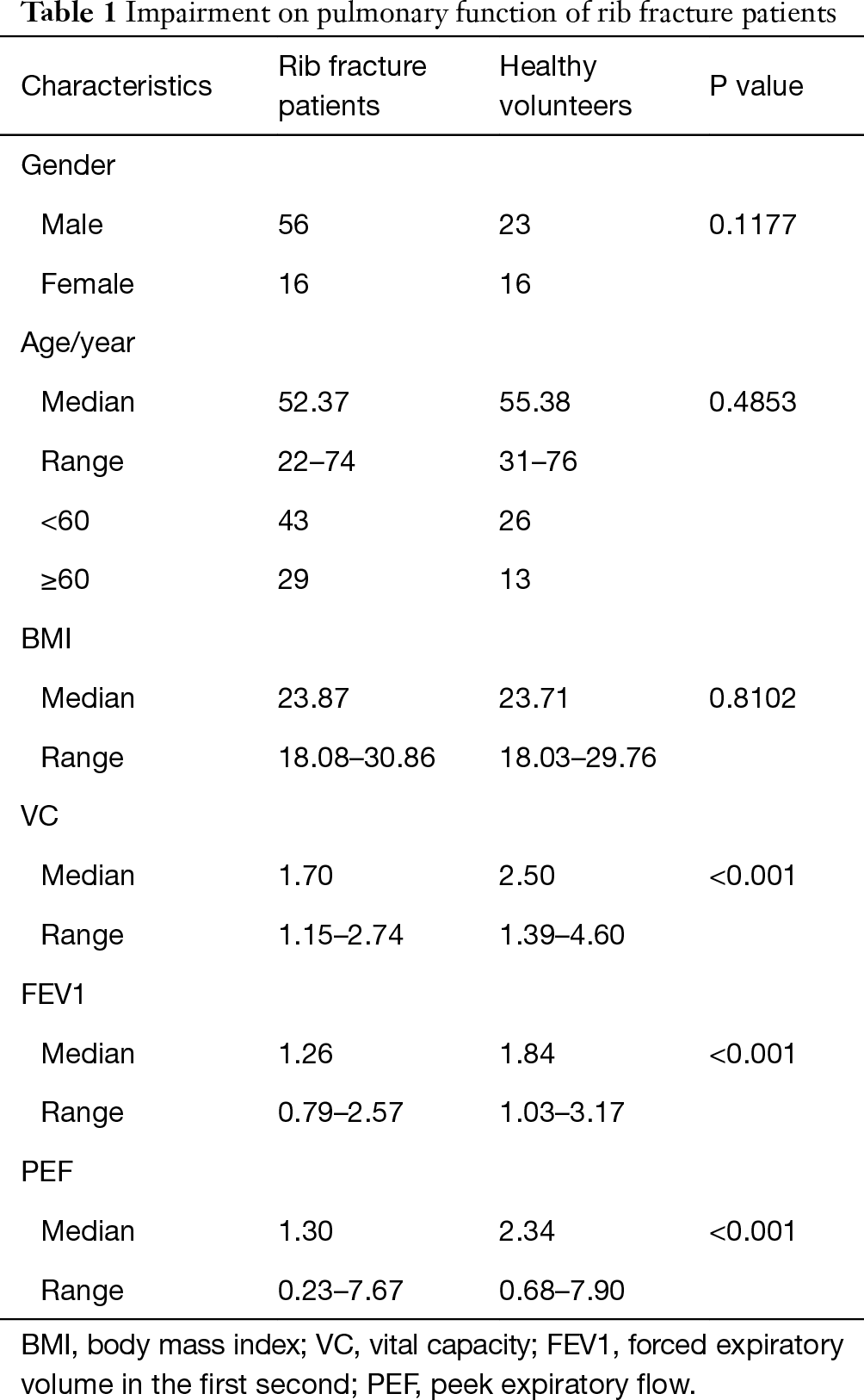 As can be seen in Table 1, no significant differences in gender, age, and BMI between the two groups were observed, whereas the values of vital capacity (VC), FEV1, and peek expiratory flow (PEF) were significantly lower in the rib fracture group.

Subsequently, we selected 109 non-flail chest patients who had undergone CWS and assessed the results of the operation. The main evaluated parameters were postoperative pain and lung function. We found significant improvements in both parameters on the second day as well as and 1 week post-operatively (Figure 2).

Consequently, we formulated the Sixth Hospital Standard for surgical indications as follows:

Although several comprehensively studies were conducted in Shanghai Sixth People’s Hospital, all data were not collected from randomized controlled clinical studies, and the level of evidence was low. Conducting rigorous randomized controlled trials for severe multiple rib fractures is difficult due to ethical issues, which has been a major limitation to CWS.

In spite of the existing problems in CWS in China, along with the ongoing research and standardization initiated in high-level hospitals, the current situation can be significantly improved.

In terms of surgical methods, thoracoscopic-assisted minimally invasive surgery in CWS has been conducted in several hospitals over recent years, and the emergence of new instruments has further advanced the surgery. In 2016, the Shanghai Jiao Tong University Affiliated Sixth People’s Hospital initiated the use of this technique in CWS. Multiple severely displaced rib fractures were successfully treated through a small, 5–7 cm incision with little or even no muscle cutting (Figure 3).

Conventional CWS often uses traditional large incisions through which several chest wall muscles are disconnected, and nerves and vessels are seriously injured. The intraoperative damage often leads to functional limitation of the upper limb, shoulder and back, resulting in long-term pain or paresthesia, etc. These possible unfavorable outcomes are important factors dissuading doctors and patients to accept surgical treatment. In the future, with the continuous improvement of minimally invasive surgical equipment and techniques, physicians and patients will accept CWS more willingly.

CWS fixation materials will also be rapidly developed. At present, pure titanium or nickel-titanium memory alloy embracing device and DePuy Synthes MatrixRIB precontoured plates are fabricated from three main types of materials. All the current devices encounter the problem that some patients would like to remove them, resulting in another surgery and additional traumas. Researches on materials with superior absorbability or tissue compatibility have successfully been conducted in China. The Southern Theater General Hospital has concentrated its studies on the clinical application of absorbable fixation materials. The Second Affiliated Hospital of Xiangya School of Medicine (Changsha, China) has launched investigations on carbon fiber fixation materials. More research focusing on the novel and reliable fixation materials is beneficial to advance the surgical methods of CWS.

In June 2013, an international workshop was organized (5), where some new ideas and techniques were proposed. However, no reliable evidence originating from multi-center randomized controlled trials was presented. Importantly, it is ethically difficult to conduct randomized studies in this field. On July 27, 2016, the US Food and Drug Administration (FDA) published “Use of Real-World Evidence to Support Regulatory Decision-Making for Medical Devices”. Multicenter large-sample prospective cohort studies are secondary to randomized controlled trials in their relevance for evaluating the effects of CWS. In 2016, the Shanghai Jiao Tong University Affiliated Sixth People’s Hospital conducted a prospective cohort study on minimally invasive small incision for the treatment of non-flail chest rib fractures. In the study, we used rigorous inclusion criteria: the number of rib fractures was relatively consistent, and the confounding factors that might have influenced the outcome were excluded. Moreover, the surgeries were conducted by the same group of thoracic surgeons, and the duration of the follow-up period was 1 year. The study revealed that the results of the surgical group were significantly superior to those in the conservative treatment group in terms of early improvement in pain, improvement in lung function, reducing duration of long-term pain, decreased time for recovery of daily self-care and time returning to work. We also found that the application of minimally invasive surgery is associated with better results in the treatment of multiple rib fractures. Accordingly, the Shanghai Jiao Tong University Affiliated Sixth People’s Hospital proposed the idea for a new study entitled “Evaluation of the effectiveness of surgical fixation of multiple rib fractures—a multi-center and ambispective cohort study”. Since June 2018, data from 15 collaborative hospitals nationwide have been collected. It is believed that the data obtained and analyzed in this multi-center, large sample, prospective cohort studies would lead to improved and enriched clinical evidence of CWS implementation. More extensive clinical research, will enable the development of a domestic consensus on the surgical treatment of rib fractures.

Special thanks to professor Hon Chi Suen for his help and constructive advice.