Post-traumatic hemorrhagic shock is the second highest cause of early death (1-3). Therefore, to reduce early mortality from post-traumatic shock, aggressive treatments, such as resuscitation, should be considered. However, there have been reports suggesting that the extent of tissue damage from ischemic-reperfusion injury due to hemorrhagic shock may be exacerbated when oxygen is reintroduced into the tissue after resuscitation (4). In other words, hemorrhagic shock and resuscitation (HSR), which are commonly observed in trauma patients, may cause inflammatory reactions in the lung parenchyma, including various organs, as well as acute lung injury, which may be triggered by HSR, and increase complications of trauma patients that can ultimately lead to death (5,6).

Reperfusion injury may be directly related to the formation of reactive oxygen species (ROS), damage of vascular endothelial cells, increased vascular permeability, and activation of neutrophils, platelets, cytokines, and complement systems (6). Among these, ROS is known to be the most important cause of reperfusion injury.

Antioxidants responsible for the inhibition and elimination of ROS have recently been introduced. Medical gases, such as hydrogen (H2), oxygen (O2), nitrous oxide (N2O), carbon monoxide (CO), nitrogen oxide (NO), and hydrogen sulfide (H2S), have been identified as these antioxidants (7). H2 in particular have been shown to have distinct characteristics, including its antioxidative effect on specific ROS and excellent diffusion capacity (7,8). The purpose of this study was to investigate the protective effect of 2% inhaled hydrogen gas on lung injury after HSR.

All surgical procedures and animal care were carried out in accordance with the Laboratory Animals Welfare Act, the Guide for the Care and Use of Laboratory Animals, as well as the Guidelines and Policies for Swine Survival Surgery, provided by the Institutional Animal Care and Use Committee of the Ajou University Health System. Rats weighing 300–500 g (DBL, Chungcheongbuk-do, Korea) were used as experimental animals and were divided into three groups: the sham group, HSR group, and H2/HSR group. 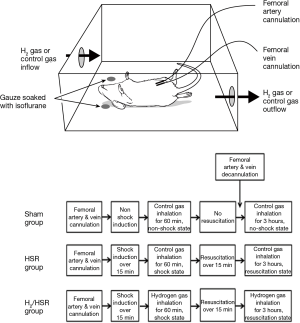 After the experiment, rats were anesthetized with isoflurane, and the abdomen was incised to extract the blood from the abdominal aorta. During this procedure, normal saline was injected through the inferior vena cava until the blood of the abdominal aorta became transparent; at this point, lung tissue was extracted and immediately frozen in liquid nitrogen and stored at −80 °C until use. Mice died naturally during this process.

After HSR, arterial blood was extracted from the abdominal aorta. The following parameters were measure and compared between the groups via arterial blood gas analyses: blood lactate, PO2, and PCO2.

Hematoxylin & Eosin (H&E) staining and histologic examination were performed to confirm the infiltration of inflammatory cells into the lungs. Lung tissue was fixed in 10% neutral buffered formalin, embedded in paraffin, and sectioned. After deparaffinization, the sections of lung tissue were stained with H&E and examined using an optical microscope.

Measurement of neutrophil infiltration into the lung tissue 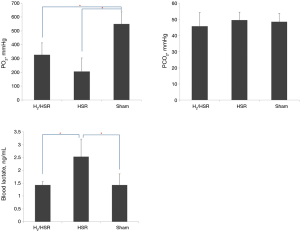 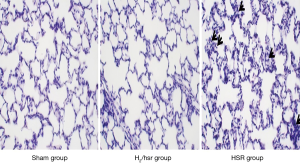 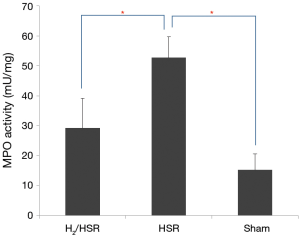 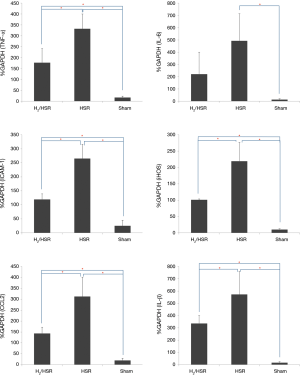 According to our arterial blood gas analyses, there was a lower PO2 level in both the H2/HSR group and HSR group when compared with the sham group. This finding suggests that HSR causes lung injury and loss of pulmonary function. Moreover, our analyses showed that PCO2 was not significantly different among the three groups. The PCO2 level is known to be elevated toward the end stage of lung injury in patients with acute respiratory distress syndrome (10). Given that this experiment examined acute lung injury, the arterial blood PCO2 levels were not different between the groups. Blood lactate levels were higher in the HSR group than in the sham group and H2/HSR group. Increased blood lactate is known to be a strong predictor of multiple organ damage and mortality in critically ill patients. Moreover, blood lactate levels in patients with acute respiratory distress syndrome are known to increase in proportion to the severity of pulmonary disease (11). Therefore, elevated blood lactate in the HSR group indirectly suggests that there may be greater lung injury in the HSR group compared with the sham and H2/HSR groups.

A variety of inflammatory mediators, such as proinflammatory transcription factors and proinflammatory cytokines, are known to be involved in ischemic organ damage. Among these, TNF-α and IL-1β are considered as initiator cytokines that initiate stepwise activations of other mediators, such as activation of other cytokines, release of prostaglandin, and induction of chemotaxis of leukocytes due to inflammation (13). Therefore, as shown in this study, a reduction of TNF-α and IL-1β by 2% hydrogen gas inhalation may ultimately reduce the incidence of lung injury from the onset of resuscitation.

It is known that ICAM-1 induces neutrophil infiltration into the lungs and CCL2 attracts monocytes into the lungs (14,15). In this study, ICAM-1 and CCL2 levels were higher in the HSR group than in the H2/HSR group. This suggests that neutrophils and monocytes were infiltrated more frequently in the HSR group, hence greater progression of lung injury.

Although IL-6 may contribute to acute lung injury as an inflammatory mediator, it is known that IL-6 has an anti-inflammatory effect that can suppress the development of lung injury, depending on the type of receptors (16). However, IL-6 is elevated in all patients with acute respiratory distress syndrome or at risk of acute respiratory distress syndrome due to infectious, traumatic, or inflammatory diseases, and such elevated IL-6 level is associated with a higher risk of death (17). Thus, elevated IL-6, as a biomarker for pulmonary injury, can be used to predict the extent of lung damage in the HSR group. However, a definitive conclusion about whether elevated IL-6 contributes to lung injury remains unclear.

iNOS has been reported to have different effects depending on the stage of lung injury. In the early stages of pulmonary injury, iNOS has been shown to play a proinflammatory role, whereas in the late stages, it has been associated with inflammation suppression (18). In this study, iNOS, which was increased in the HSR group, behaved as a proinflammatory mediator, given that this study examined acute, early stage lung injury.

In conclusion, inhalation of 2% hydrogen gas after HSR can minimize the extent of lung injury by inducing a decrease in the MPO activity—and consequently inhibiting the infiltration of neutrophils into the lungs—and by inducing a decrease in the infiltration of inflammatory cells into the lung tissues—and consequently suppressing the formation of proinflammatory mediators, such as IL-1β, TNF-α, iNOS, ICAM-1 and CCL2. Although it has not been applied in clinical practice, the administration of hydrogen gas through a ventilator, nasal cannula, or simple inhalation in traumatic hemorrhagic patients is expected to reduce the extent of lung injury.

The authors would like to thank Dong-Su Jang, MFA, (Medical Illustrator) for his help with the illustrations.

Funding: This study was supported by Basic Science Research Program through the National Research Foundation of Korea (NRF) funded by the Ministry of Education (2012R1A1A2008312).

Ethical Statement: All surgical procedures and animal care were carried out in accordance with the Laboratory Animals Welfare Act, the Guide for the Care and Use of Laboratory Animals, as well as the Guidelines and Policies for Swine Survival Surgery, provided by the Institutional Animal Care and Use Committee of the Ajou University Health System.