As an academic thoracic surgery center performing minimally invasive anatomical lung resections with VATS for 8 years, we have recently developed a robotic surgery program with the da Vinci Robotic System (Intuitive Surgical, Inc, Mountain View, California, USA) which started on October 2011. In this study we aimed to analyze the segmentectomy operations performed for various etiologies.

From the prospectively recorded database, anatomical segmentectomy patients’ data was retrieved. The data was analyzed for age, gender, etiology, pulmonary function tests, complications, mortality, duration of chest tube and duration of postoperative hospital stay. The number of mediastinal lymph node stations dissected and the number of dissected lymph nodes in patients with either primary or secondary lung cancer were also analyzed. For metastasectomies only single lesions close to the segmentary bronchus and primary lung cancer smaller than 2 cm were candidates for robotic segmentectomy operations (Figure 1). Patients who had primary lung tumors larger than 2 cm but smaller than 4.5 cm (2 patients) with compromised pulmonary functions were also underwent robotic common basal segmentectomy operations. According to our protocol; all patients who had an indeterminate nodule, or proven lung cancer or a possible metastatic lung cancer, had a PET-CT. Mediastinoscopy was reserved only for the patient who had a possible brain metastases.

Robotic operations for indeterminate nodules were performed after localization of the nodule either with operative view (retraction of visceral pleura), after palpation with finger prior to the docking without access thoracotomy, or from 3 dimensional (3D) images of chest tomography.

All operations were performed by a single console surgeon (AT). All patients had anatomical segment resections as described below. Chest tubes were removed during the hospital stay if the length of stay was shorter than 5 days. If the drainage lasted longer and patients did not have any other problems (one patient), then the patients were discharged with chest tubes attached to the Heimlich valve.

The patient was positioned on lateral decubitus position. The table was tilted either anteriorly or posteriorly depending on the type of segmentectomy operation to be performed. For superior segments of both lower lobes and posterior segment of the right upper lobe anterior tilt was preferred. For the resection of other segments a posterior tilt was preferred. Three ports were opened while trying to keep 10 cm between each port and 10 to 15 cm from the target which was hilum of the lobe containing the segment to be resected. The camera was placed in the middle port. The robot was docked from the posterior of the patient with 30 to 45 degrees between the vertebral column of the patient and transverse axis of the cart (Figure 2).

Figure 2 Docking of da Vinci. Arm numbers should be seen by the surgeon 1 at the table (arrows). The transverse axis of the da Vinci approaches from posterior of the patient with 30 to 45 degrees to vertebral column of the patient. 1, surgeon responsible from docking (may shift to console); 2, assistant surgeon is responsible for service, retraction, clipping and stapling; 3, nurse position.

With the robotic camera in up position, ports and instruments were placed and pleural symphyses were divided. Service port was performed at 10th-11th intercostal space at the posterior part of the thoracic wall. The rest of the operation was done with the camera in down position. Maryland or curved bipolar forceps for right arm and prograsper for left arm were used as needed. Segmentectomies were performed by dissecting the fissure and removing the nodes around the segmentary artery and bronchus. Arteries and veins were clipped with Hem-o-Lok (Teleflex Medical, Research Triangle Park, NC) or stapled with a vascular stapler. Bronchus was always stapled (Figures 3-5). Imaginary intersegmental plane was stapled after ventilating and deflating the remnant lung. In none of the patients, glues or sealants were used. Chest was closed by placing a single 28 F chest tube from the camera port. 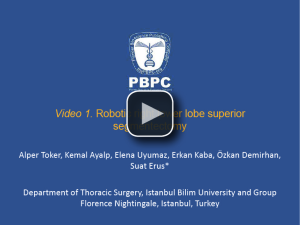 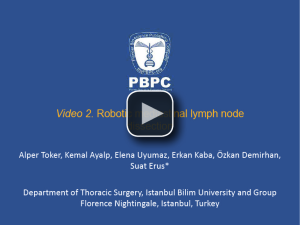 Routine pain management was with intercostal blocks to two intercostal spaces upper and two intercostal spaces lower around the ports (not more than 20 mL Marcaine) (Astra Zeneca, Istanbul) and 1 gram perfalgan (Bristol-Myers Squibb, New York City) intravenous infusion every 6 hours, and voltaren SR 75 mg (Novartis, Basel) are given through intramuscular route twice a day until chest tube is removed. After the removal of the chest tube or discharge of the patient oral medication with paracetamol and non-steroid anti-inflammatory drugs were given. Visual Analog Scale (VAS) was recorded by the anesthesiologists at 48 hours after the operation and by surgical team on postoperative day 15 as a part of data collection for possible evaluation of our pain management approach.

The mean age was 59 (range, 28-84) years. Twenty-one segmentectomies, 10 from the right lung and 11 from the left lung were performed. Eight patients had a segmentectomy from the upper lobes and 13 patients from the lower lobes. Common basal segmentectomy (eight patients) and superior segmentectomy of the lower lobes (five patients) were the most commonly employed segmentectomies. Mean duration of console time was 84±26 (range, 40-150) minutes. Mean force expiratory volume (FEV1) in the first second was 2,278±662 (range, 1,274-4,870) mL. The mean duration of chest tube drainage and postoperative hospital stay were 3±2.1 (range, 1-10) and 4±1.4 (range, 2-7) days respectively. Conversion to open surgery was not necessary. Postoperative complications occurred in four patients (19%). The prolonged air leak (>5 days) was the cause of morbidity in all patients. None of the patients experienced a major cardiopulmonary complication. The mean number of mediastinal stations and number of dissected lymph nodes were 4.2 and 14.3 (range, 2-21) lymph nodes from mediastinal stations and 8.1 (range, 2-19) lymph nodes from hilar and interlobar stations, respectively. VAS was 3.4 and 1.4 on postoperative day 2 and day 15 (Table 1). The mean diameters of the malignant lesions were 1.9 (range, 1-4.3) cm. There were eight (72.7%) adenocarcinoma histology including five patients with lepidic pattern as the most common primary lung cancer. Eight patients (72.7%) out of 11 primary lung cancer were recorded to be in stage 1A. Six patients were operated on for benign diseases (bronchiectasis one patient, granuloma four patients and echinococcus alveolaris one patient). Four patients had segmentectomy operation for single pulmonary metastases (three patients for colon carcinoma and one patient for uterus leiomyoma).

Growing knowledge of robotic lobectomies for lung cancer would provide additional experience for performing segmentectomy operations for lung cancer. Yet, there are only two articles published to assess the feasibility of robotic segmentectomy operation (4,5). In one of them Dylewski et al. (5) reported 35 segmentectomy patients and in the other Pardolesi et al. (4) reported 17 segmentectomy patients. Mean duration of surgery was reported to be 189 minutes with no major intraoperative complications and conversion to open procedure was reported as unnecessary (4). In this study postoperative morbidity rate was 17.6% with a median postoperative stay of 5 (range, 2-14) days, and postoperative mortality was 0% (4). The final pathology was reported to be NSCLC in eight patient, typical carcinoids in two, and lung metastases in seven. Because the other study (5) described a robotic series of almost 200 patients with mainly lobectomies, we do not have a detailed data regarding to segmentectomy operations.

Our indications and perioperative and postoperative outcomes are quite similar to those of Pardolesi and colleagues (4). In our experience, 15 out of 21 patients (75%) were operated on for malignant lung diseases. Conversion to open surgery was not necessary. Postoperative complications occurred in four patients (19%). Mean console robotic operating time was 84±26 (range, 40-150) minutes which was quite similar to that of Dylewski’s experience (5). The duration of our console time was shorter than the reported experiences even with VATS. Mean duration of chest tube drainage and postoperative hospital stay were 3±2.1 (range, 1-10) and 4±1.4 (range, 2-7) days respectively, which was also quite similar to the above mentioned study (4). The mean number of mediastinal stations and number of dissected lymph nodes were 4.2 and 14.3 (range, 2-21) lymph nodes. From hilar and interlobar stations, a mean of 8.1 (range, 2-19) lymph nodes were dissected in patients primary or secondary lung cancer. We need to stress that, five of our patients were not good candidates for lung resection due to compromised pulmonary, renal and cardiac problems. But we did not experience any adverse event in those patients. Our surgical technique demonstrated similarities with those of Pardolesi’s (4). However, our access port, similar in size to their experience (4), was located at posterior thoracic cavity at 10th-11th intercostal space. This port may not only have allowed the greater movement of the equipment within the cavity but also may have avoided the disturbance of the mammary gland in female patients. In our experience, we used only one Maryland forceps or curved bipolar forceps and one Prograsper forceps for each patient. Expenditures for these including the drapes cost a total of 600 USD, excluding the maintenance and initial costs of the robot.

The major difficulty in robotic segmentectomy operation is the resection without palpation. This could be overcome by palpating and tattooing the lesion prior to the implementation of the robotic arms. If this was not possible, 3D images could be used to identify the lesion, the vessels and the bronchus. Segmentectomy operation with robotic surgery requires a good knowledge of the anatomy of pulmonary vessels and bronchi in each patient (13). The foreknowledge of the anatomy of each patient would contribute to the safety and accuracy of the operation (13). It has been reported that presurgical planning based on patient’s actual 3D pulmonary model was useful for patients with stage IA NSCLC ≤2 cm in diameter and for selecting an appropriate VATS lung resection for an individual (14). Apparently, this may be a required preoperative technique in robotic segmentectomy as well. Although we only had three patients with this preoperative investigation, we discussed with experienced radiologists before each operation to delineate the borders of resection from axial, coronal and sagittal tomographies. Especially for metastasectomies, we believe that CT image evaluation on monitor with a qualified radiologist is essential to ensure that the lesion is solitary.

Robotic segmentectomy may provide better dissection capabilities around smaller vessels and the lymph nodes around lobar and segmentary bronchi. However, developing these techniques may require preparation and patience to overcome the difficulties of a correct docking, developing dissection techniques.

Yet, the provided data and results about performing robotic segmentectomies may not fully satisfy the thoracic surgical community. However, we have demonstrated that the robotic anatomic lung segmentectomy is a feasible and safe procedure with an acceptable operating time, adequate lymph node dissection, less pain and few complications.