Early detection and prompt reversion of tissue hypoperfusion are key factors to prevent progression to multiorgan dysfunction and death during shock states (1). Techniques commonly used to monitor tissue perfusion have focused mainly on systemic blood flow and the balance between oxygen demand and supply to the tissues (2,3). Indeed, quantitative resuscitation targeting central venous oxygen saturation (ScvO2) and some macro hemodynamic parameters was related with a significant reduction of mortality in an initial single-center randomized controlled trial including patients with septic shock (4). Subsequent studies on implementation of resuscitation bundles targeting similar hemodynamic goals in septic shock were also apparently beneficial (5,6). Nevertheless, the utility of oxygen-derived parameters was promptly challenged (7), and recent clinical trials failed to demonstrate their clinical benefit (8-10). In fact, ScvO2 is often normal at the ICU admission (11), and attaining macro hemodynamic goals and/or normalization of global oxygen-derived parameters in septic shock do not exclude the occurrence or persistence of tissue hypoxia. In this context, other variables such as carbon dioxide (CO2)-derived parameters could provide very important information about macro and micro hemodynamics, even when oxygen- derived variables resemble corrected. Importantly, variations in CO2 occur faster than changes in lactate levels, which make the CO2-derived parameters an attractive tool to monitor tissue perfusion and potentially, cell oxygenation during the early stages of shock.

Under normoxic conditions, carbon dioxide (CO2) is generated during the tricarboxylic acid or Krebs cycle. The total CO2 production (VCO2) is directly related to the global oxygen consumption (VO2), by the relationship: VCO2 = RQ × VO2, where RQ symbolizes the respiratory quotient and represents the relationship between the total CO2 generated and the oxygen (O2) consumed throughout metabolic processes. Under normal rest conditions, RQ fluctuates from 0.6 to 1.0 depending on the predominant energetic substrate utilized (i.e., amino acids, lipids or carbohydrates). Thus, under resting aerobic conditions RQ should not be >1.0 since VCO2 should not exceed the O2 availability. Indeed, RQ remains <1.0 even during metabolic rate rises (as long as aerobic metabolism is maintained), because the proportional increase in VCO2 and VO2.

According to the Fick equation, VO2 and VCO2 are directly proportional to the cardiac output and their respective arterial-to-venous and venous-to-arterial content differences. Following this rationale, the quotient between the venous-to-arterial CO2 content difference (Cv-aCO2) and the arterial-to-venous O2 content difference (Ca-vO2), i.e., the Cv-aCO2/Ca-vO2 ratio, should reflect the VCO2/VO2 fraction and it should be theoretically independent of flow variations, as cardiac output is present at both numerator and denominator components of the formula (Figure 1). 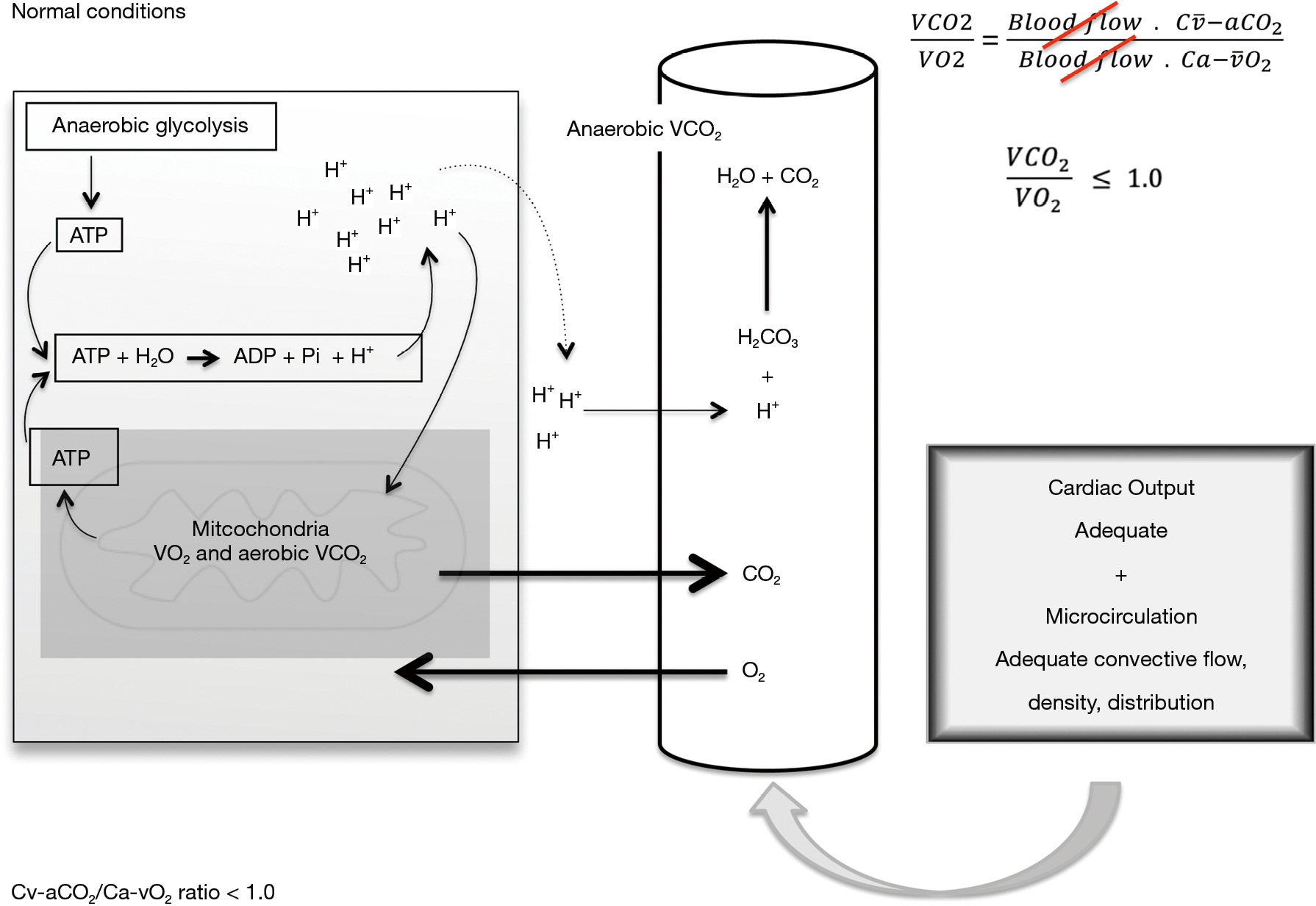 Figure 1 Normal resting conditions. Normal macro and micro hemodynamics lead to homogeneous distribution of oxygen to the tissues. Under preserved mitochondrial function, CO2 is generated during the Krebs cycle (aerobic VCO2). The ATP generated predominantly during the oxidative phosphorylation (and in a lesser extend, during glycolysis) is hydrolyzed thus liberating free hydrogenions (H+), which are normally recycled into the mitochondria to synthetize again ATP. Minor quantities of H+ pass the cell membrane reaching the circulation. Such H+ are buffered by the HCO3- system and finally transformed into CO2 and water. However, this last process accounts minimally for the total VCO2 when oxidative phosphorylation functions normally. The relationship between the total CO2 production (VCO2) and oxygen consumption (VO2) should be <1.0 under aerobic conditions. According to the Fick equation, VCO2 and VO2 are directly proportional to the cardiac output and their respective venous-to-arterial and arterial-to-venous content differences, respectively. Thus, the quotient between the venous-to-arterial CO2 content difference (Cv-aCO2) and the arterial-to-venous O2 content difference (Ca-vO2), i.e., the Cv-aCO2/Ca-vO2 ratio, should reflect in some extend the VCO2/VO2 fraction, independently of flow variations (since cardiac output is present at both numerator and denominator components of the formula).

Under aerobic steady state conditions, VCO2 approaches VO2, whereby the Cv-aCO2 and the Ca-vO2 should also do it. Consequently, VCO2 should not exceed O2 availability whereby the VCO2/VO2 ratio [i.e., the respiratory quotient (RQ)] should not be >1.0. Thus, VCO2/VO2 and Cv-aCO2/Ca-vO2 ratio >1.0 should be considered as abnormal and these could potentially reflect anaerobic CO2 generation.

Interestingly, the hydrolysis of the ATP has been proposed as the most important source of hydrogen ions during intense exercise (13), prolonged ischemia (14) or increased Na+-K+ ATPase activity (15-19). Thus, non-recycled H+ due either to slowdown, blocking or overshoot of oxidative phosphorylation, progressively accumulate to be finally buffered by the bicarbonate system. This later will be responsible for the anaerobic VCO2 as the protons are captured by HCO3– leading to carbonic acid (H2CO3) generation with subsequent dissociation into CO2 and H2O (Figure 2). Nevertheless, although anaerobic VCO2 is a biologically plausible process, its clinical demonstration is quite complex since the efferent venous blood flow might be sufficient to wash out the total CO2 produced at the tissues, thus masking the portion of increased anaerobic CO2. 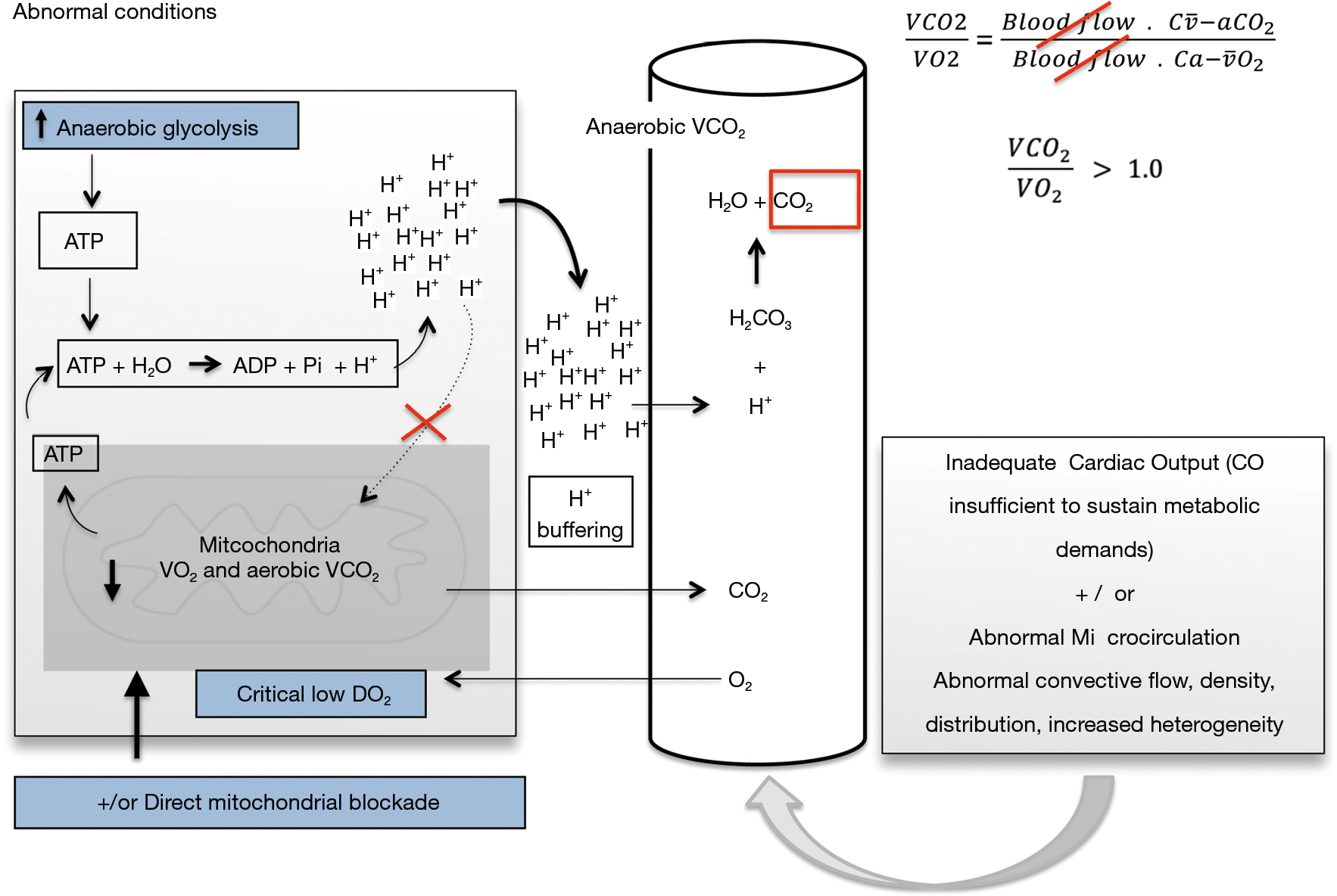 Figure 2 Abnormal conditions. When macro hemodynamics and/or microcirculatory blood distribution are inadequate or when mitochondrial machinery is blocked, the H+ generated during the ATP hydrolysis are not recycled during the oxidative phosphorylation. Thus, the excess of H+ will cross the cell membrane to finally be buffered by the HCO3- system and thus, to be transformed into CO2 and H2O. This leads to increase VCO2/VO2 fraction and its surrogate, the Cv-aCO2/Ca-vO2 ratio. To minimize the influence of Haldane effect, CO2 contents should be calculated instead of CO2 partial pressures (for details, see at the text).

The hypothetical meaning of the Cv-aCO2/Ca-vO2 ratio

Experimental blockade of mitochondrial O2 utilization and limitation of O2 availability during severe tissue hypoperfusion have been related with “non-symmetrical” reductions in VCO2 and VO2 with the subsequent RQ increase. Such “asymmetric” VCO2/VO2 fall might be explained by an increase in anaerobic CO2 production resulting from the buffering of protons delivered from the ATP hydrolysis that are not recycled during oxidative phosphorylation (Figure 2). Similarly, when anaerobic threshold is achieved after an excessive increased metabolic demand, total VCO2 can exceed the adaptive increment in VO2 (20), thus leading to RQ values >1.0. Similar data have been described during experimental shock in which VCO2 decreases slightly less than the VO2 reduction, leading to increases in the VCO2/VO2 ratio (21,22). Interestingly, reversion of shock was related with returning VCO2/VO2 ratio to values <1.0. Thus, if considering the Cv-aCO2/Ca-vO2 ratio as a surrogate of the VCO2/VO2 ratio, a Cv-aCO2/Ca-vO2 ratio >1.0 could potentially identify the presence of anaerobic metabolism.

The potential clinical use of the Cv-aCO2/Ca-vO2 ratio

Although hyperlactatemia has been traditionally used as a marker of anaerobic metabolism, lactate levels might frequently increase by causes different to tissue hypoxia (23). Indeed, high lactate levels can result from increased glycolytic activity, abnormal pyruvate metabolism and altered metabolic lactate reuptake (24-26). Thus, interpretation of hyperlactatemia during the resuscitation and post resuscitation periods of septic shock is not straightforward. In this sense, the use of combined CO2 and O2-derived parameters could theoretically help to identify, in some extend, the persistence or reversion of anaerobic metabolism.

An experimental model of septic shock secondary to peritonitis demonstrated that regional mesenteric Cv-aCO2/Ca-vO2 ratio tracks the instauration and reversion of anaerobic metabolism following the variations in microcirculatory blood flow distribution at jejunal mucosa and serosa and also tracking the variations in mesenteric lactate levels (33). Hence, anaerobic metabolism reflected by increases in Cv-aCO2/Ca-vO2 ratio can be reversed by improvement of O2 distribution at microcirculatory level, at least during very early stages of septic shock (33).

Combined CO2 and O2-derived variables might add prognostic information to that provided by lactate levels during early stages of shock. In fact, Cv-aCO2/Ca-vO2 ratio reacts faster than lactate levels to short-term hemodynamic changes, which makes it an attractive variable to be monitored and, although difficult to be calculated, its interpretation is easier, with values >1.0 suggesting ongoing anaerobic metabolism. Thus, an increased lactate accompanied by a Cv-aCO2/Ca-vO2 ratio >1.0 might suggest “ongoing” tissue hypoxia, whereby clinicians should be encouraged to optimize macro and micro hemodynamics. Conversely, increased lactate levels accompanied by Cv-aCO2/Ca-vO2 ratios ≤1.0 could suggest that such lactate increase results from slow lactate clearance more than from ongoing tissue hypoxia, whereby additional resuscitation efforts should be discouraged. Nevertheless, such hypothesis must be tested in prospective clinical trials before to translate into the clinical practice.

The Haldane effect, the CO2 dissociation curves and the criticism about the Cv-aCO2/Ca-vO2 ratio as a marker of anaerobic metabolism

The phenomenon whereby hemoglobin increases or decreases its affinity for CO2 according to variations in its oxygenated or deoxygenated state is known as Haldane effect. Thus, when blood enters systemic capillaries and releases O2, the CO2-carrying capacity rises so that blood picks up extra CO2. Conversely, as blood enters pulmonary capillaries and binds O2, the CO2-carrying capacity falls, thus facilitating pulmonary elimination of CO2.

According to the Haldane effect, the total CO2 content (CCO2) rises at a given pCO2 as O2 hemoglobin saturation falls, thus indicating a non-linear relationship between pCO2 and CCO2. Likewise, changes in tissue oxygen extraction, pH, tissue VCO2, and hemoglobin concentration can also influence the relationships between pCO2 and CCO2, making difficult the interpretation of the venous-to-arterial pCO2 difference. In addition, depending on baseline SvO2, the Haldane effect may increase or decrease Pv-aCO2 in response to the same changes in blood flow or metabolism (34).

Admittedly, Pv-aCO2/Ca-vO2 could be equivalent to the Cv-aCO2/Ca-vO2 ratio when PCO2, pH, and SvO2 approximate to normality, which occurs in many cases. Nevertheless, during low pCO2 and SvO2 conditions, Cv-aCO2 might profoundly differ from Pv-aCO2. Indeed, clinical observations during very early stages of resuscitation of septic shock suggest that persistence of a high Cv-aCO2/Ca-vO2 ratio is related to unfavorable clinical outcomes but not its equivalent, the Pv-aCO2/Ca-vO2 ratio (28). Thus, although the influence of the Haldane effect is negligible at low Pv-aCO2, the disagreement of Cv-aCO2 and Pv-aCO2 increases at higher Pv-aCO2 values (28).

Some authors have proposed that high Pcv-aCO2/Ca-vO2 ratio does not reflect anaerobic metabolism and obeys mainly to variations in hemoglobin levels (35), according to observations based on the analysis of expired gases by indirect calorimetry. Nevertheless, under non-steady-state conditions such as during shock states, RQ is easily influenced by a number of physiologic events that can alter the agreement between measurements of RQ by indirect calorimetry (RQic) and the true metabolic activity. Thus, the high solubility of CO2 in tissues and blood, and the variations in pulmonary ventilation/perfusion (V/Q) relationships might lead to momentary discordant results between RQic and the true RQ, until a new stead- state is attained (36). Consequently, the relationship between venous-arterial CO2 to arterial-venous O2 differences and anaerobic metabolism should not be rejected based just on measurements of VCO2 by RQic. Similarly, attributing high Pv-aCO2/Ca-vO2 ratios just to variations in hemoglobin levels could be physiologically misleading, since at very low hemoglobin values, small errors in hemoglobin measurements will amplify the error of calculation of Pv-aCO2/Ca-vO2 or Cv-aCO2/Ca-vO2 values.

Physiological determinants of combined CO2 and O2-derived variables are quite complex. Theoretically, the Cv-aCO2/Ca-vO2 ratio is independent of systemic blood flow variations and it should approach the RQ or at least, it should approximates cell respiration state. Although venous-arterial CO2 to arterial-venous O2 differences have demonstrated to predict fluid responsiveness in terms of VO2, to anticipate slowly lactate clearance and to be related with clinical outcomes, its potential application in the clinical practice needs to be confirmed.