Cardiac surgery has progressed over five decades from a rather experimental period to highly standardized procedures with very limited mortality. This is especially true for coronary artery bypass grafts (CABG) for which mortality is currently often reported to be below 2.0% (1,2), despite progressive increase in patients’ age and complexity. This has been made possible by general improvement in surgical and perioperative management but also by technical progresses, especially regarding the extra-corporeal circuit (ECC). Obviously, cardioplegia also allowed a critical step in the history of cardiac surgery. This especially in the 70’s with the almost parallel apparition of the still well established Bretschneider Custodiol solution, the St-Thomas Plegisol solution as well as the Buckberg blood cardioplegia concept. Interestingly however, only very few cardioplegic solutions are registered as medical product (drug) and have a market authorization. In fact, a majority of hospitals still prepares their own cardioplegic solutions or outsources this production to external providers. Also, most cardiac surgeons and/or perfusionists supplement the solution by additional doses of electrolytes or other chemicals according to individual believes. Indeed, several surveys have shown that myocardial protection strategies largely vary from one center to the other or even from one surgeon to the other (3-5). It is therefore very difficult to obtain a clear overview of current practice, and even more difficult to reliably compare the real efficacy and safety of these individual preparations. It appears thus that there is still today no consensus regarding the optimal cardioplegic solution (6).

Cardioplexol™ was initially conceived as a solution adapted for the emerging concept of less invasive ECC, the so-called mini-ECC or MiECC, a low-priming closed circuit operating at constant volume and which is considered less invasive than standard ECC (7-10). The objective was to obtain a solution that followed the same chemical principles as other standard procedures but that also allowed for a much faster administration, a critically reduced volume, a longer delay before second administration, and mostly the induction of an almost immediate cardiac arrest. Cardioplexol™ was introduced in our surgical activity initially as a previous version in 2003, then since September 1st, 2008 as the currently used form.

In the present paper, we present the results or our single center experience with Cardioplexol™ when used with MiECC for isolated CABG.

Cardioplexol™ (ongoing registration process in selected EU countries) is produced for our Clinic by the Laboratorium Dr. G. Bichsel AG (Unterseen, Switzerland). Cardioplexol™ is composed of potassium, magnesium and xylitol (solution A, 95 mL) and procaine (solution B, 5 mL) and comes in a small card box that can be stored at room temperature. Boxes must be placed at least 3–4 hours before use so that the solutions can reach a temperature of 2–8 °C. Shortly before administration, solutions A and B are mixed (total =100 mL) and distributed in two 50 mL syringes ready to be injected.

Surgical procedures are standardized and performed via a full sternotomy using a MiECC system. A standard cardioplegic cannula is placed in the aortic root and flushed before the first 50 mL Cardioplexol™ syringe is connected via a 3-way stop cock. The bypass is initiated, the aorta is cross-clamped and the content of the first Cardioplexol™ syringe is injected without delay, immediately followed by the content of the second syringe. The complete injection of the 100 mL Cardioplexol™ typically lasts less than 10 seconds and the heart usually stops beating already after a few seconds. The surgeon can immediately proceed with the coronary procedures.

Need for a second, third and fourth Cardioplexol™ administration

All consecutive patients, between September 1st, 2008 and December 31st, 2014, who underwent a CABG procedure with a MiECC, were considered in the current analysis. All relevant pre-, peri-, and post-operative data (up to day 30) were retrieved from our prospectively updated and independently managed surgery registry (Dendrite, Dendrite Clinical Systems Ltd, Oxfordshire, UK). Each patient was individually contacted 1 year after surgery for follow-up purposes. Alternatively or for complementary information, the GP or cardiologist may have been contacted as well. The cantonal ethics committee approved the current analysis as part of our regularly performed quality control, and all patients provided informed consent regarding inclusion of their pseudonymised data in this analysis.

Troponin T and CK-MB were assessed by electrochemiluminescence using an immunoassay on a Modular analytics E170 platform (Roche Diagnostics, Mannheim, Germany). The identification of perioperative myocardial infarction (MI) was based on the Third Universal Definition of Myocardial Infarction and on the criteria used in the SYNTAX trial as previously described (11). In brief, a MI was assumed if 2 or more of the 3 following criteria were present within the first 7 days following CABG: (I) new Q-wave or new left bundle-branch block compared to the pre-operative echocardiography (ECG); (II) creatine kinase-MB (CK-MB) >60 mg/L; (III) Post-operative severe wall motion abnormalities in ECG corresponding with ischemic ECG changes or angiographically documented new graft or native coronary artery occlusion or myocardial necrosis diagnosed by autopsy. Electrocardiograms (ECG) were all independently evaluated by a senior physician and a cardiologist. Post-operative echocardiography was performed by a physician independent of the current study and only if clinically indicated. A diagnosis of post-operative stroke was retained in case of neurological dysfunction related to confirmed focal cerebral infarction. Post-operative new-onset renal insufficiency was defined by a new need for dialysis or, in patients with pre-operative creatinine levels below 2 mg/dL (172 µmol/L), if the post-operative creatinine level rose above 2 mg/dL and reached at least double the pre-operative value during hospitalisation.

Results regarding continuous variables are expressed as mean ± standard deviation (SD) and median with quartile range and minimum/maximum values. Categorical variables are presented as absolute numbers and percentages.

Out of a total of 7,447 adult cardiac surgical operations performed during the 76 months observational period, 2,416 were isolated CABG procedures. Patients were 66.2±9.7 years old, 81.3% were males and the median logistic EuroSCORE was 3.2. Further patients’ baseline characteristics are summarized in Table 1. 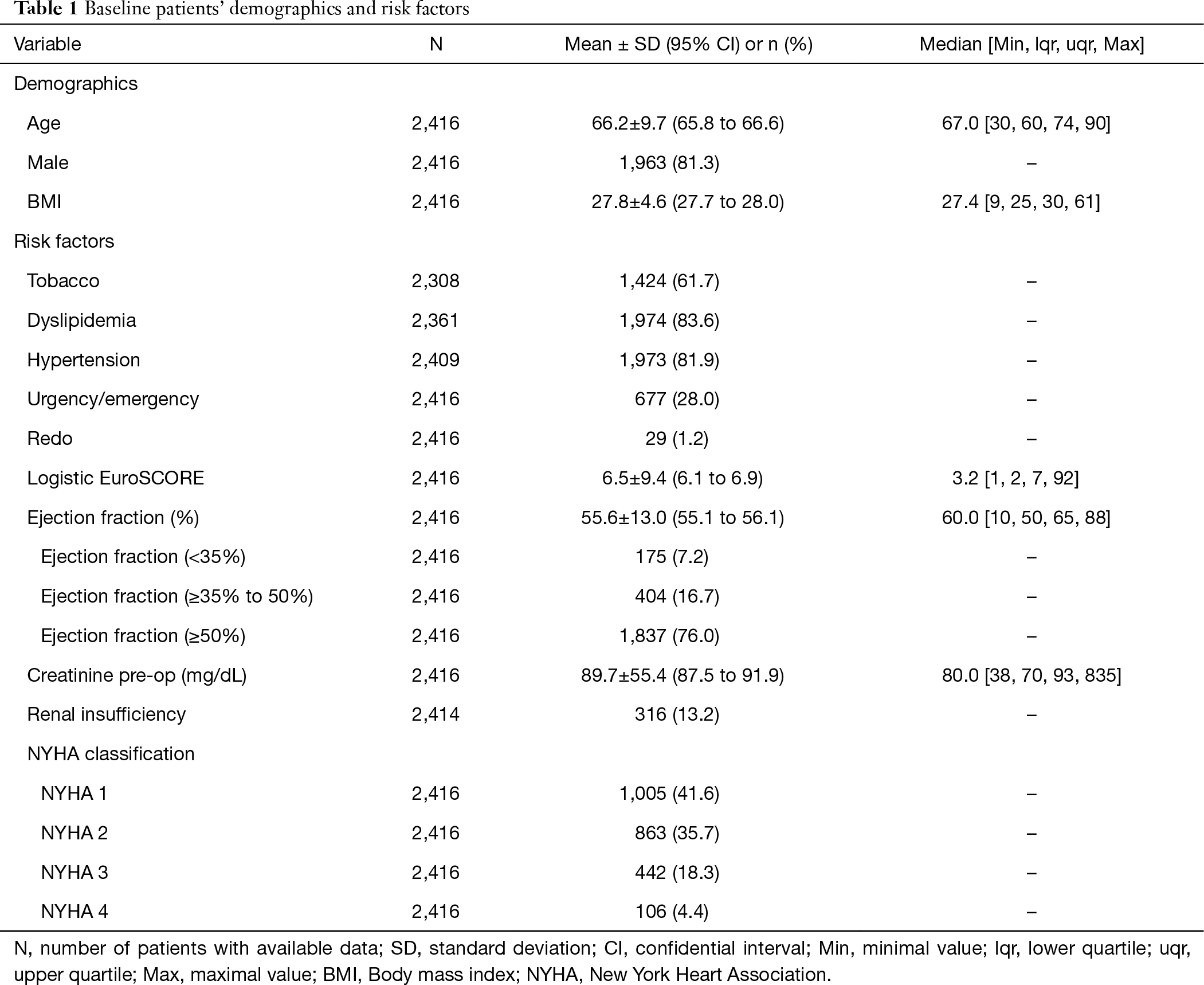 Patients had a coronary artery disease affecting in average 2.8±0.5 vessels, the left main artery being involved in 25.5% of the cases. Further operative data are presented in Table 2. In average, 3.2 vessels were bypassed. The median value cross-clamp time was 45 minutes and more than 75% of the procedures could be performed with a cross-clamp time of less than 60 minutes. The volume of Cardioplexol™ administered during a procedure was in average 111±32 mL with more than 75% of the cases who received only one dose of 100 mL. Blood potassium assessed 5 minutes after Cardioplexol™ injection was 4.4±0.5 mEq/L. Hematocrit during the procedure was 28.5%±4.8%. After reperfusion, the heart recovered a spontaneous rhythmic activity and necessitated an internal electrical cardioversion in only 9.5% of the cases (Table 2). 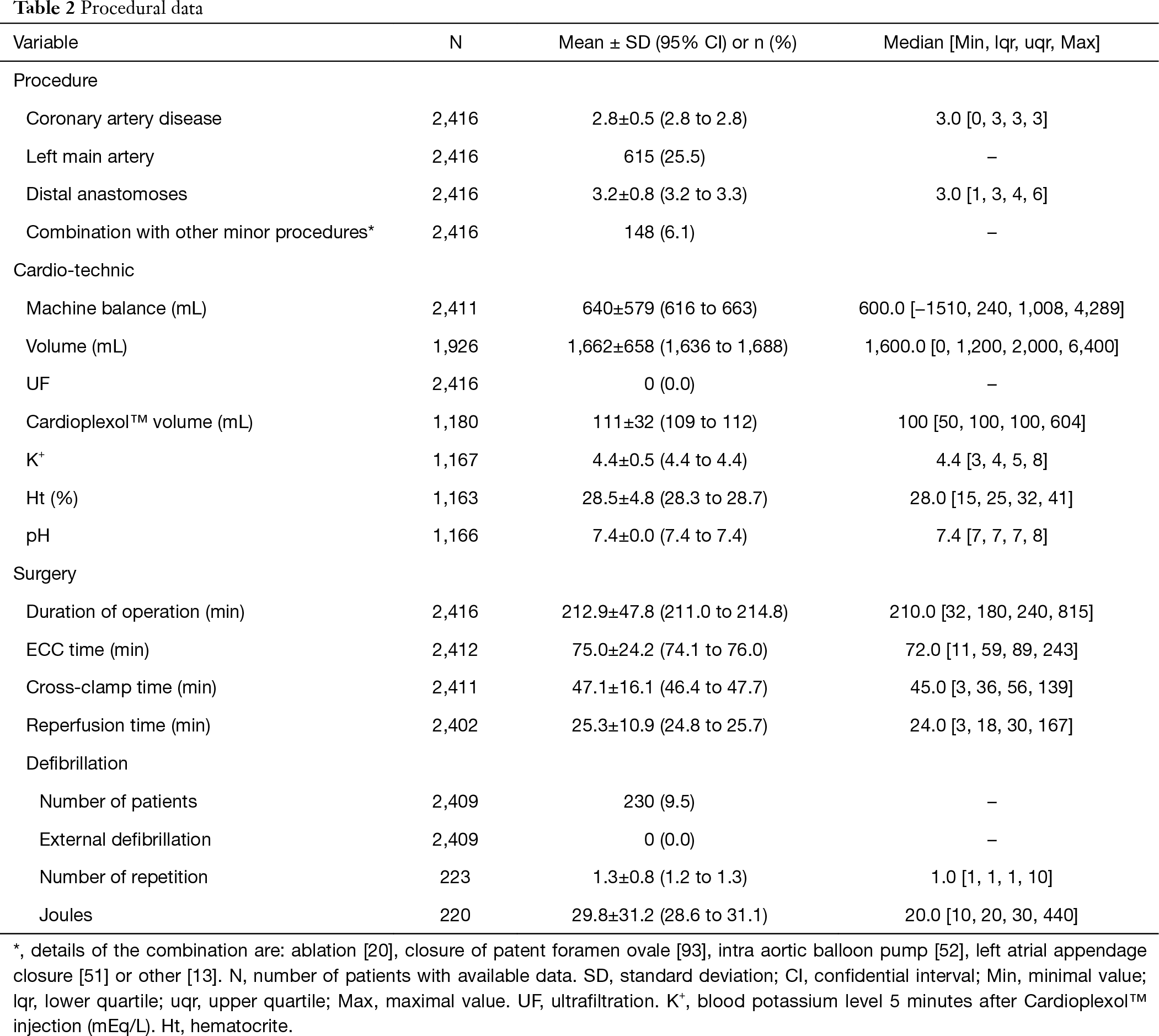 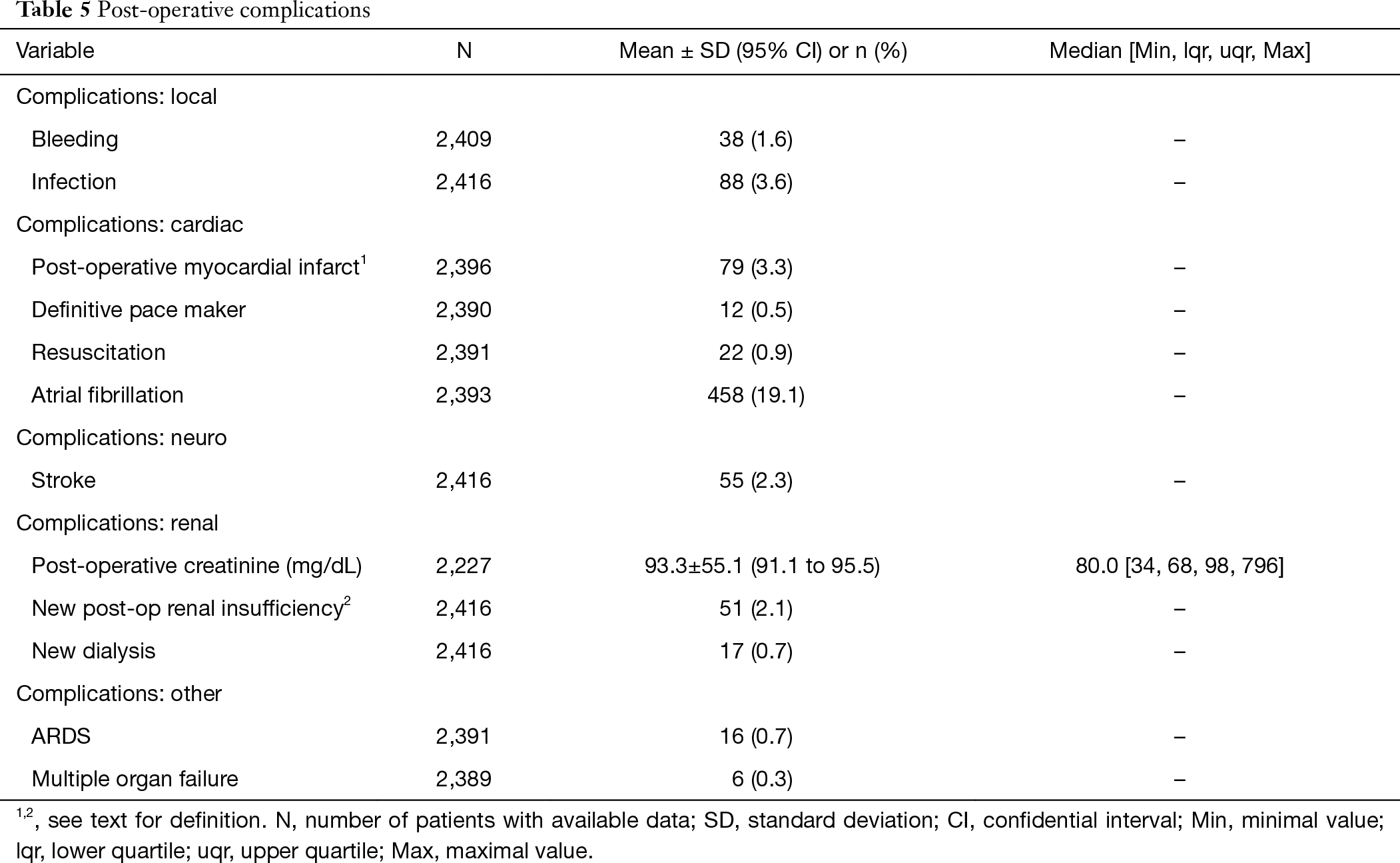 Myocardial protection has always been a matter of extended research. After initial controversial results in the 50–60’s, it is eventually in the 70’s, that a few cardioplegic solutions became accepted as reliable means to arrest and protect the myocardium during prolonged periods of aortic cross-clamping. This allowed further development and wide spreading of cardiac surgical activity on the one hand and the performance of increasingly complex operations. Interestingly, since then, only minor improvements have been brought into the cardioplegic field and still today, most procedures are performed with solutions based on the Bretschneider, St-Thomas or Buckberg principles. The idea of developing a new cardioplegic solution at our institution was initially a consequence of our early interest for mini heart lung machines (12). It was indeed thought that a large volume of cardioplegia would be in contradiction with the basic low-volume advantage of MiECC systems. Our objectives became then to develop an ultra low-volume cardioplegia, which effect would be prolonged and that could be administered by the surgeon him/herself. After initial versions fabricated by our hospital pharmacy, the development toward a marketable solution necessitated further investments and collaboration with professional companies. A start-up company was created in order to support this development.

The current Cardioplexol™ solution has been used in our clinic since September 2008. It has immediately confirmed several attractive surgical advantages such as the limited manipulations required for its preparation, the direct and rapid administration by the surgeon him/herself and as consequence, the elimination of the cardioplegia set. But the most appreciated advantages were certainly the immediate cardiac arrest (within a few seconds) and the prolonged delay before a second or further administrations are needed (45 minutes). Overall, these two aspects allow a remarkable reduction of the cross-clamp time, i.e., a limitation of the ischemic period. In a recently performed pivotal phase 3 randomized study comparing Cardioplexol™ and Buckberg, the cross-clamp time appeared reduced by approximately 10 minutes (data not yet published, results partially available under www.clinicaltrialsregister.eu).

The aim of the current paper was to introduce the Cardioplexol™ solution and present for the first time the results of the initial clinical experience with a large collective of patients. Although it was not the intention of this paper to demonstrate significant clinical advantage of Cardioplexol™ as compared to well-established reference solutions, our data can still be used to challenge those found in the literature, especially since the profile of our patients corresponds to the one of patients operated in most western clinics and to those reported in most publications.

TnT although always elevated after a cardiac operation, is today considered as an adequate surrogate to evaluate the quality of intra-operative myocardial protection. The degree of post-operative TnT elevation is also recognized as a prognostic marker of early-, mid- and long-term mortality (2,11,13-18). In our current experience, median values of TnT at around 6, 12 and 24 hours post myocardial reperfusion were around 0.3 ng/mL and the median of the maximal value reached during these first 24 hours was 0.4 ng/mL. These results compare very well with those found in the literature (2,14,19-23). The rate of post-operative MI (3.3%) is in agreement with the range of 1.4–9.7% that can be found in the literature (2,13,20,22-24). Similarly, the post-operative stroke incidence of 2.3% also falls within the range of 1.6–2.5% reported by others (1,2,25-28). A new dialysis was necessary in 0.7% of the patients, which is very low as compared to values of 1.4–3.2% found in the literature (2,25,26). Finally, the 30 days mortality of 1.4% compares very favorably with the range of 0.9–4.6% reported by others (1,2,25-28).

It appears thus, that besides the advantages mentioned earlier in terms of handling and efficiency, Cardioplexol™ is also reliable in terms of post-operative morbidity and mortality. During the extended period of observation, no adverse event could be directly related to the use of this new cardioplegic solution. Cardioplegia with Cardioplexol™ is thus an attractive alternative solution, especially for MiECC procedures. Its use, although very simple, requires however a few words of caution. “Traditional” solutions with which surgeons have been used to work for years require a prolonged coronary perfusion of a high volume as well as re-injections every 20–30 minutes. Quite oppositely, the Cardioplexol™ solution is restricted to a single bolus injection of only 100 mL. With this in mind, it appears obvious that the solution must be administered perfectly. For this, it is important before the operation, to check the competence of the aortic valve since an aortic insufficiency would preclude the correct perfusion of the coronary arteries. The presence of a ventricular hypertrophy must also be checked as a higher initial dose may then provide a better protection.

The current study has certainly limitations including its already discussed retrospective and non-comparative design. Parts of these results have however served as a basis to design a single-center prospective randomized pivotal phase 3 study comparing Cardioplexol™ to Buckberg blood cardioplegia. Results are not yet published but data are partially available under www.clinicaltrialsregister.eu. A second phase 3 multicenter study is currently ongoing and its design is available under www.clinicaltrials.gov. The results of this study are required to complete the registration process and eventually get an initial market authorization, possibly in 2020–2021 in several European countries.

In conclusion, Cardioplexol™ appears efficient and safe for the use in CABG procedures, especially when performed with a MiECC system. Its use is however currently limited since the product is not yet authorized on the market.

The authors thank Mrs Bettina Kohler and Monika Sperisen for the excellent support regarding the data collection and verification.

Ethical Statement: The cantonal ethics committee approved the current analysis as part of our regularly performed quality control, and all patients provided informed consent regarding inclusion of their pseudonymised data in this analysis.