In vitro potency of antipseudomonal β-lactams against blood and respiratory isolates of P. aeruginosa collected from US hospitals

Pseudomonas aeruginosa is an opportunistic pathogen associated with a variety of infections ranging from simple folliculitis to sever septic shocks depending on the host immune status and severity of any underlying conditions present. As a result of its ability to adapt to variable environmental conditions as well as develop biofilms, P. aeruginosa is capable of avoiding innate immune clearance mechanisms and thus has enhanced pathogenicity (1). Moreover, P. aeruginosa flourish under selective antimicrobial pressure, are intrinsically resistance to many classes of antimicrobials and are capable of acquiring additional resistance genes from other organisms. These characteristics combined with the organisms’ ability to develop resistance using a variety of mechanisms makes P. aeruginosa a formidable pathogen in the clinical arena (1,2).

The corner stone of P. aeruginosa therapy most often involves the administration of a β-lactam antimicrobial; however, escalating resistance within this class has eroded the treatment armamentarium. In December 2014, ceftolozane/tazobactam (C/T) a β-lactam/β-lactamase inhibitor combination with antipseudomonal activity including multi-drug resistant (MDR) isolates was approved by the FDA to treat complicated urinary tract infections (cUTI) and intra-abdominal infections (IAI) (3). Recently, a phase III multicenter clinical trail completed enrollment of 726 patients with ventilated nosocomial pneumonia to assess C/T efficacy and safety in comparison with meropenem (clinicaltrials.gov, NCT 02070757).

In the current era of rapidly evolving antimicrobial resistance, studies assessing the potency of available antimicrobials are fundamental to informing decisions regarding the most appropriate choice of therapy (4,5). As well as, focused effort on using the source of isolates (i.e., respiratory versus blood) as a guide to select proper empiric therapy is an increasing demand. Thus, we assessed the in vitro potency of 7 antipseudomonal agents including C/T against P. aeruginosa collected from numerous hospitals across the US.

Consecutive non-duplicate, non-urine, respiratory or blood isolates of P. aeruginosa were obtained from adult inpatients as part of their routine medical management. Isolates were collected from 35 different hospitals across the United States, in 2017 and 2018. Organisms were identified at each participating site using methods normally employed by their laboratories and were transferred onto trypticase soy agar slants for shipping.

Merck Pharmaceuticals provided C/T, all others antibiotics were purchased from Sigma (St. Louis, MO, USA). MIC trays were prepared using the Biomek 3000 (Beckman Instruments, Inc., Fullerton, CA, USA). As recommended by CLSI, K. pneumoniae 700603 and P. aeruginosa 27853 were utilized as quality control (QC) strains; all QC values were within CLSI acceptable ranges (6). Colony counts were performed on each isolate to verify the correct inoculum. The CLSI interpretative susceptibility criteria were utilized for each agent. P. aeruginosa were classified as carbapenem non-susceptible if isolates were non-susceptible to IPM or MEM with MIC >2 mg/L. Additionally, isolates were defined as multidrug resistant (MDR) if they displayed resistance to 3 or more classes as represented by the following phenotypic resistance profiles: CIP (MIC ≥4 mg/L), IPM (MIC ≥8 mg/L), CAZ (MIC ≥32 mg/L), TZP (MIC ≥128 mg/L), and TOB (MIC ≥16 mg/L) (6).

A total of 1,209 P. aeruginosa isolates were collected and tested. Antipseudomonal potency of assessed agents is presented in Table 1. The MIC for which 50% and 90% of isolates were inhibited (MIC50/90) by C/T was 0.5/2 mg/L, MEM 0.5/16 mg/L, and IPM 2/16 mg/L. The MIC distribution for all agents is displayed in Figure 1, among this population of P. aeruginosa; C/T exhibited the highest activity with 95% susceptibility, followed by CAZ (78%) and FEP (76%). All other antipseudomonal agents, consisting of representative examples across classes, demonstrated a range of 66–74% susceptibility (Table 1). 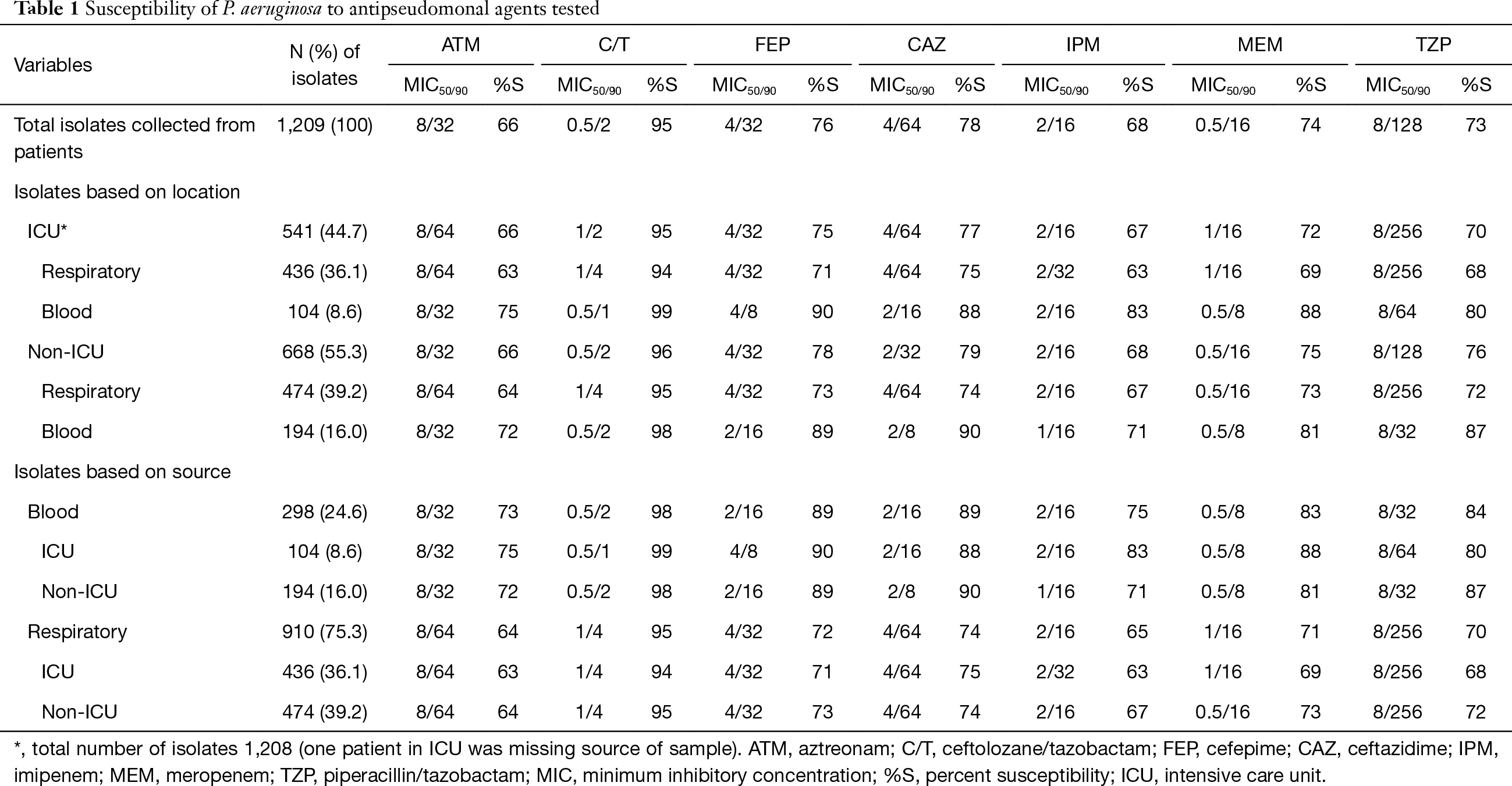 Based on location, around half (55.2%) of isolates tested were collected from patients outside the ICU. Similar %S were found in isolates collected inside and outside the ICU with C/T exhibiting the highest susceptibility in both settings. However, based on source of isolates tested, the majority of samples were from respiratory sources in both ICU and non-ICU setting. Isolates from blood samples were found more susceptible compared with isolates from respiratory samples. Additionally, isolates collected from blood samples outside ICU exhibited reduced susceptibilities compared with blood samples collected inside ICU (Table 1).

Overall, carbapenem non-susceptibility defined by IPM or MEM MIC of >2 mg/L was 35% (n=423) in the current P. aeruginosa population. Among carbapenem non-susceptible isolates, C/T showed the highest susceptibility exhibiting 89% followed by CAZ 60% and all other agents were below 54% susceptibility (Table 2). Among the assessed P. aeruginosa population, 322 isolates were TZP NS; C/T was found to have 85% susceptible with 17–39% for the remaining antipseudomonal agents tested (Table 2). Thirteen percent of isolates (n=153) were defined as MDR by reference broth microdilution methods. The degree of susceptibility among these MDR isolates for C/T was 74% whereas that of the other agents tested ranges from 5–12% (Table 2). 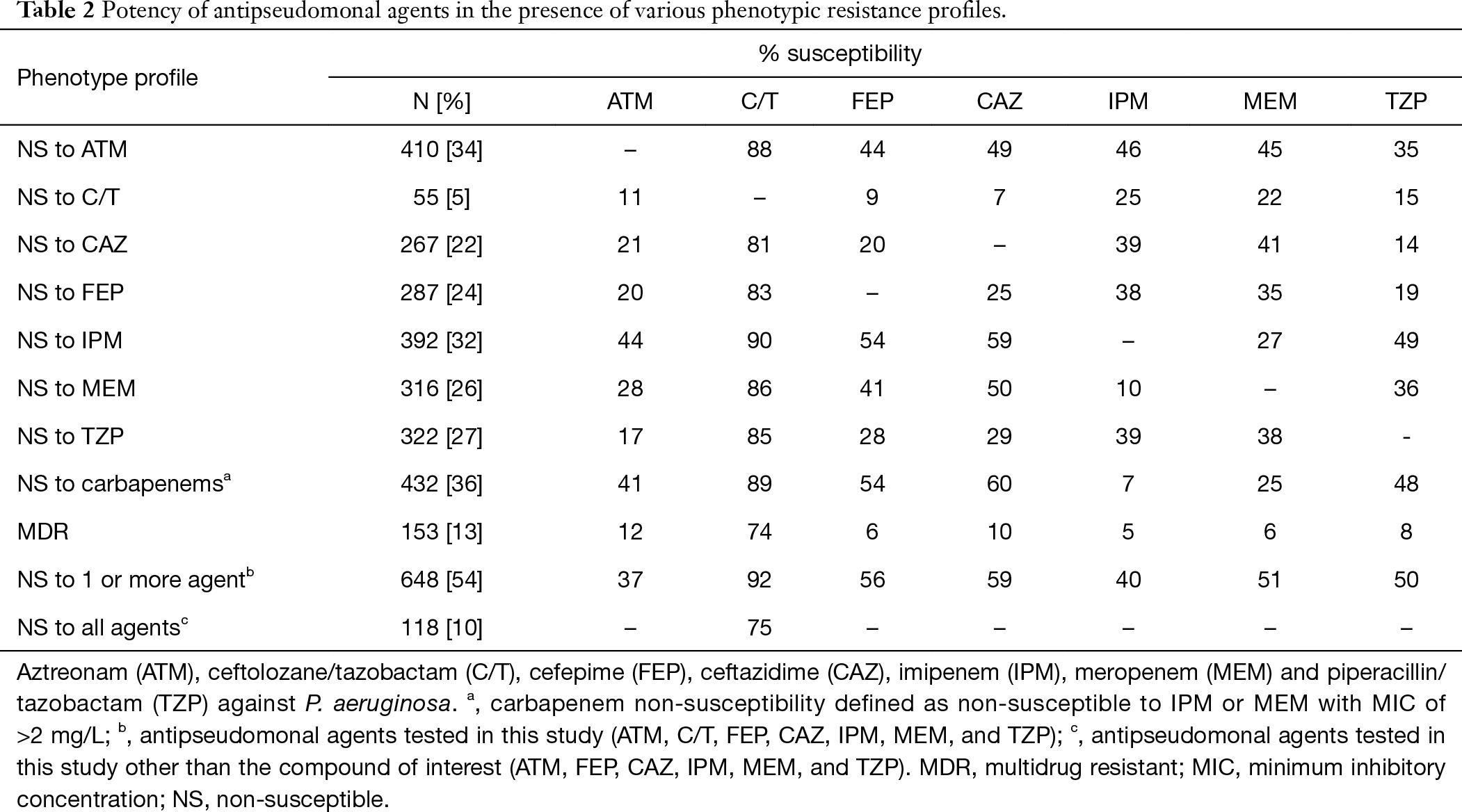 Quarter of P. aeruginosa population observed herein was from blood source, with higher susceptibilities in comparison to respiratory isolates. However, as 75% of isolates in this study were from respiratory samples and susceptibilities among these isolates are reduced in comparison with isolates from blood samples, studies similar to ASPECT-NP (clinicaltrials.gov, NCT 02070757) are needed to focus more efforts on considering source of isolates in selecting the most appropriate therapy.

While an overall basal assessment of potency is required for the total isolates collected, subset analysis looking at target phenotypic profiles where a novel compound of interest may be used in clinical settings is of increased relevance. Since P. aeruginosa are commonly resistance to 1 or more of the conventional β-lactams this phenotypic profile appears as a reasonable target to assess the potency of new therapies. In a recent study of 309 P. aeruginosa was resistant to 1 or more antipseudomonal β-lactams, 72.5% of the isolates were C/T susceptible (12). In our current population, 648 (54%) of the isolates were non-susceptible to 1 or more and 118 (10%) were non-susceptible to all antipseudomonal antibiotics. Despite varying phenotypic profiles to individual β-lactams, C/T demonstrated 81–90% susceptibility, which diminished to 74% and 75% when considering the MDR and NS to all agents, respectively. Similar to our previous observation, this current in vitro assessment of P. aeruginosa reveals that resistant to 1 β-lactam does not translate to resistance to the entire class and thus the testing of novel therapies in the wake of resistance to conventional agents may often yield viable treatment options (13). In infections suspected to be caused by resistant P. aeruginosa, combination therapy is the most common strategy in clinical settings. Although synergistic interactions are not confirmed to be superior over monotherapy against P. aeruginosa in clinical studies, combination therapy increases the probability of providing appropriate initial therapy by having at least one active agent against the suspected pathogen especially in cases where susceptibilities are not known (5).

In an attempt to initiate early appropriate therapy in the at-risk patient, data derived in the current study highlights the need for routine susceptibility testing of C/T in institutions where >20% of the P. aeruginosa are non-susceptibility to conventional β-lactams, while reflective testing schemes may be suitable in institutions with lower resistance.

In this P. aeruginosa population, C/T demonstrated the highest overall susceptibility (95%), while, other antipseudomonal agents including carbapenems displayed susceptibilities ranging from 66–78%. In the era of escalating P. aeruginosa resistance to conventionally utilized β-lactams, the enhanced potency of newer novel therapies should be considered in an attempt optimize both clinical and microbiologic outcomes.

This work was supported by Merck & Co.

Conflicts of Interest: DP Nicolau has acted as a consultant or speaker’s bureau member for, or has received research funding from: Achaogen, Bayer, Cepheid, Melinta, Merck, Pfizer, Shionogi, and Tetraphase. The other authors have no conflicts of interest to declare.