This study was approved by the institutional review board, and the informed consent requirement was waived. A retrospective review was conducted on all consecutive patients aged <50 years who underwent thoracoscopic surgery for primary spontaneous pneumothorax at Jikei University Hospital from January 2010 to December 2016. The age, sex, body mass index (BMI), smoking history, serum albumin level, degree of pneumothorax, history of ipsilateral pneumothorax, degree of emphysema, identification of bullae before surgery on computed tomography (CT), surgical procedure, and follow-up time were evaluated. All surgeries were performed by the same surgical team. Bullae or blebs were resected with a stapling device. In some patients, staple line coverage was performed with a polyglycolic acid (PGA) sheet with fibrin glue at the surgeon’s discretion. A follow-up was conducted for all patients. All the statistical analyses were performed with EZR statistical software (Saitama Medical Center, Jichi Medical University, Saitama, Japan), which is a graphical user interface for R (The R Foundation for Statistical Computing, Vienna, Austria) (3). Categorical variables were evaluated using the chi-square test and the t-test was utilized to analyze continuous variables between the two groups. In addition, follow-up analysis using time-to-event data was also performed, with the event rates estimated bay Kaplan-Meier methods and compared with log-rank test. Differences with P values of <0.05 were considered to be statistically significant. 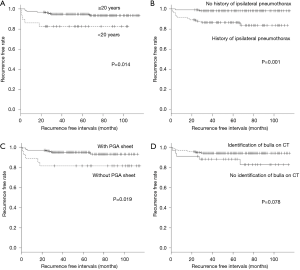 The clinical details of the 14 patients who experienced postoperative recurrence are provided in Table 3. There were eight patients in which pneumothorax recurred within 1 year of surgery. The median time from surgery to recurrence was 5.5 months. 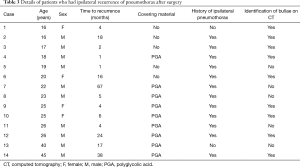 Preoperative identification of bullae on CT was associated with a lower incidence of postoperative recurrence in the univariate and multivariate analyses. We identified bullae on preoperative CT in 158 of 192 patients (82.3%), which was a similar finding to that of a previous study (8). We speculate that the reason for the lower recurrence rate in the patients in whom bullae were identified on preoperative CT was that such identification leads to easier intraoperative detection of bullae, resulting in appropriate resection of the bullae and a consequent decrease the recurrence rate. We also found that the size of the pneumothorax was not related to postoperative recurrence, which was comparable with the findings of a previous study (9). Staple line coverage with PGA sheets resulted in a lower incidence of postoperative recurrence of pneumothorax as determined by the univariate analysis. Postoperative recurrence of pneumothorax is speculated to result from the formation of new blebs adjacent to the staple line, or incomplete resection of bullae at the time of surgery. Applying a PGA sheet to the resection margin causes inflammation of the pleura and accompanying infiltrations of eosinophils and macrophages (10), resulting in reinforcement of the pleura.

This study has several limitations, including the fact that this was a retrospective, single-center study. In addition, although the number of the patients included in this study was large, only 14 patients experienced recurrence. Furthermore, selection bias may have been present, which limits the power of the statistical analysis.

A history of ipsilateral pneumothorax, and negative preoperative identification of bullae on CT were risk factors for postoperative recurrence of pneumothorax.

Ethical Statement: Institutional review board (IRB) approval for this study was obtained from the Medical Research Ethics Committee of Jikei University (approval number 30-245). Informed consent was waived by the IRB because of the retrospective nature of this study.