The only randomized trial, which was conducted by the Lung Cancer Study Group in 1995, investigated the impact of the surgical procedure [i.e., lobectomy (LR) or sub-lobar resection (SLR)] on the prognosis of patients with T1N0M0 (tumor size, ≤3 cm) non-small cell lung cancers (NSCLC). This study showed an increase in local recurrence (7% versus 17%) with a limited resection and a lower survival; thus, LR has remained as the best therapeutic approach for NSCLC, including stage I tumors (1). However, recent studies have reported similar long-term prognostic outcomes for patients with early-stage NSCLC that underwent SLR (2-4).

The right middle lobe (RML) is the smallest lobe in the lung. Lung cancer occurring in the RML is less common compared with that occurring in the other lobes, and it accounts for approximately 5% of all primary lung cancers (5-7). Despite a growing adoption of SLR as an alternative to LR in patients with early stage NSCLC (2-4), there are few studies on patients with early stage RML lung cancer. In 2018, Lv and colleagues (7) published a SEER database-based study that compared the prognosis of patients with stage IA RML NSCLC (tumor size, ≤2 cm), followed by either SLR or LR. They concluded that LR was associated with an improved prognosis compared with that of SLR, and that SLR was only suitable for patients with a ≤1 cm tumor size. However, there was a significant imbalance between the groups in this study, which resulted in selection bias and inaccurate conclusions. To minimize selection bias, we performed propensity score-based matching (PSM) to generate two homogenous groups for comparison. The aim of the present study was to compare the prognostic outcomes of patients with stage IA RML NSCLC that underwent either SLR or LR after PSM.

This retrospective study, which was approved by the Ethics Committee of the Peking University First Hospital, retrieved data from the SEER database using SEER*STAT 8.3.5 software. Patients with RML lung cancer were identified using the International Classification of Diseases for Oncology (ICD-O) topography code of C34.2, and those registered between 2005 and 2015 were selected. Patients who met the following criteria were included: (I) an age ≥18 years; (II) a diagnosis of stage IA NSCLC, according to the guidelines of the American Joint Committee on Cancer (AJCC, 6th Edition) (8); (III) a history of treatment with LR or SLR; and (IV) a history of only one primary tumor. Patients with incomplete data and/or those that were lost to follow-up were excluded.

The extracted data consisted of clinicopathological and treatment characteristics, as well as follow-up information, including age, sex, race, year of diagnosis, histological subtype, tumor grade, tumor size, surgical procedure, marital status, the total number of dissected lymph nodes (TLN), survival status, and lung cancer specific survival (LCSS). The sex, race, year of diagnosis, histological subtype, tumor grade, and marital status were directly retrieved from the database. The tumor size was determined according to the “derived AJCC-6 T (2004+)” in the SEER database. The surgical procedures were defined according to the “RX summ–surg prim site (1998+)” and the “site-specific coding scheme” of lung resections. The codes for LR in the SEER database were 30 and 33, whereas those for SLR were 20, 21, 22, and 24. The TLN was determined according to the “regional lymph node examined (1988+)”. The prognostic outcomes referred to LCSS, which only reflected deaths caused by lung cancer.

All statistical calculations and PSM were carried out using SPSS 25.0 software (SPSS, Chicago, IL, USA). All variables were categorical, except for age, tumor size, and TLN. For further analysis, these continuous variables were converted into categorical data. The cut-off age was 67 years. The tumor size was stratified into three tiers as follows: ≤1, 1–2, and 2–3 cm, according to the AJCC Tumor Node Metastasis (TNM) Staging Classification of lung cancer (6th Edition) (8). The TLN was stratified into four tiers as follows: 0, 1–3, ≥4, and not determined, which was consistent previous studies (7,9). The chi-square test was used to evaluate the association between the surgical procedures and other clinicopathological factors. Survival curves were generated using the Kaplan–Meier method and evaluated by the log-rank test. To estimate the impact of LR or SLR on the prognosis, univariate and multivariate cox regression analysis was carried out, and the results were presented as hazards ratios (HR) and 95% confidence intervals (95% CI). There were fewer patients treated by SLR compared with those treated by LR (198 versus 906). Moreover, there were imbalances in the baseline characteristics, such as tumor size and TLN; therefore, PSM was used for more objective comparisons (10). The PSM was described and adjusted for different variables, including age, sex, race, year of diagnosis, tumor grade, tumor size, TLN, marital status, and the use of adjuvant therapy.

For PSM, patients receiving LR or SLR were matched 1:1 with a caliper set at 0.02. The matching algorithm was nearest neighbor matching, and the estimation algorithm was logistic regression. All statistical tests were two-sided, and a P value <0.05 was considered statistically significant.

A total of 16,052 patients were identified from the SEER database. Among them, 14,948 patients did not meet the inclusion criteria and were excluded. Figure 1 illustrates the approach used for identifying the stage IA (T1N0M0) RML NSCLC cases registered in the SEER database. As a result, 1,104 patients were selected and included. Table 1 summarizes the characteristics of the entire population. There were 435 male patients (39.4%) with a median age of 67 years (range, 22–92 years). One hundred ninety-eight (17.9%) patients underwent SLR, and 906 (82.1%) underwent LR. Using the Kaplan-Meier method, we estimated the 5- and 10-year LCSS rates for the entire population as 85.6% and 77.4%, respectively. 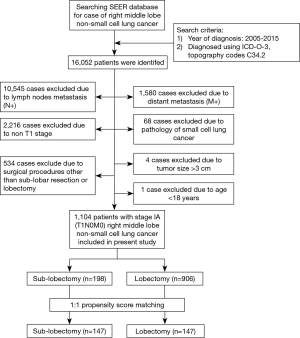 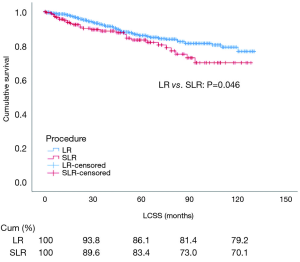 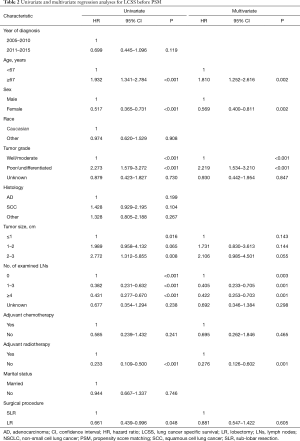 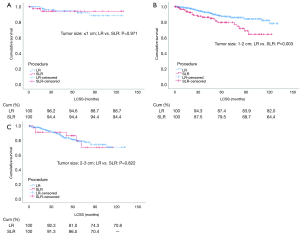 Patient characteristics: LR versus SLR before and after PSM 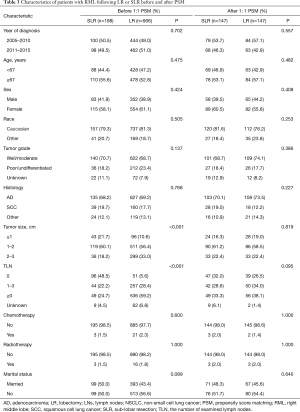 Impact of LR versus SLR on LCSS after PSM 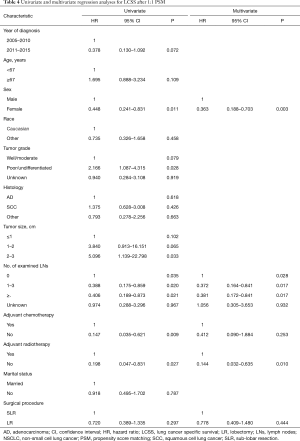 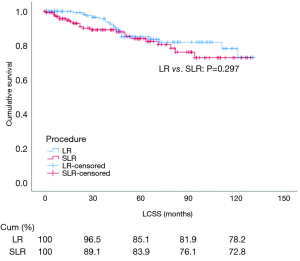 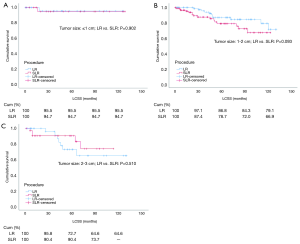 The impact of the surgical procedure on the prognostic outcome in patients with RML NSCLC remains unclear. Presently, LR is the most common surgical procedure used to treat RML tumors. SLR is rarely performed for RML tumors because (I) the RML is the smallest lobe, and SLR has little effect in preserving lung function (11), and (II) RML tumors associate with abundant lymphatic drainage, which in turn might result in recurrence and a worse prognosis (6,12). With the popularity of computed tomography screening, more cases of stage I lung cancer are diagnosed earlier. Taken together with the fact that the survival rate of patients with stage I NSCLC was similar between the two surgical procedures (2-4), we applied this concept to middle lobe tumors and hypothesized that the prognostic outcome of patients with stage IA RML NSCLC should be similar between LR and SLR.

Our results are not consistent with those of another study. Lv and colleagues (7) carried out a population-based study of 861 patients with stage IA RML NSCLC (tumor size, ≤2 cm) and reported the prognostic outcome was worse for patients who underwent SLR compared with those that underwent LR for >1–2 cm tumors. This discrepancy in results between the two studies may be explained by a difference in the study population. Lv and colleagues excluded patients receiving adjuvant therapy, whereas we included these patients. Previous studies have reported that adjuvant therapy can impact the prognosis of patients with stage IA NSCLC after surgery (13,14). Furthermore, there were imbalances in the baseline characteristics between patients who underwent SLR or LR in the study by Lv and colleagues. For example, the patients that underwent SLR had significantly less LNs dissected (P<0.001) than those who underwent LR. The number of dissected LNs is an indicator of the prognostic outcome after surgery. Xu and colleagues (15) studied 110 patients with stage IA NSCLC and reported that the extent of LN dissection was an independent risk factor for disease-free survival (DFS) (P=0.001), whereas Stiles and colleagues (16) studied 196 patients with similar disease characteristics who underwent wedge resection and reported an improved DFS for patients whose LNs were pathologically examined compared to those whose LNs were not examined (5-year survival rate, 92% versus 74%; P=0.025). Our study yielded similar results. Multivariate cox regression analyses revealed that the number of LNs was an independent risk factor both before PSM (P=0.003) and after PSM (P=0.028). Therefore, insufficient LN dissection during SLR may have contributed to the inaccurate conclusion drawn by Lv and colleagues. In our study, the variables affecting LCSS were balanced after PSM. We found that the prognostic outcome was similar between patients that underwent SLR or LR and comparable LN dissections. In addition, we evaluated the impact of the surgical procedures on survival stratified by tumor size after PSM. The results of our study showed no difference in the LCSS between patients that underwent SLR or LR for ≤1, 1–2, and 2–3 cm tumors (all P>0.05).

There were several limitations in this study. Firstly, the SEER database is retrospective; thus selection bias was inevitable. Secondly, other variables, such as visceral pleural invasion and lymphovascular invasion, which may have affected the prognosis, were not provided by the SEER database. To the best of our knowledge, there is no randomized study comparing prognostic outcomes of patients that underwent LR and SLR in the treatment of stage IA RML NSCLC, PSM can adjust for biases from baseline characteristics, thus generating more homogenous groups for comparison and more convincing results (9).

Similar to lymphadenectomy, the prognostic outcomes in patients with stage IA RML NSCLC were comparable between LR and SLR.

We acknowledge TopEdit LLC for linguistic editing and proofreading during the preparation of this manuscript.

Ethical Statement: This retrospective study, which was approved by the Ethics Committee of the Peking University First Hospital, retrieved data from the SEER database using SEER*STAT 8.3.5 software.