Esophageal cancer is the ninth most common cancer and the sixth most common cause of cancer-related death globally (1). Approximately half of patients with esophageal cancer are diagnosed only when the disease has reached an advanced stage (1,2). The most common presentation in patients is dysphagia that is typically accompanied by weight loss. Therefore, this type of cancer is associated with extensive treatment requirements, a considerable decline in health-related quality of life (QOL) and a poor prognosis. Multidisciplinary therapy including neoadjuvant therapy followed by surgery is the standard treatment for locally advanced esophageal cancer (1-3). Furthermore, treatment for patients with unresectable and distant metastases aims to control cancer-related symptoms, improve QOL and prolong survival using chemotherapy, chemoradiotherapy and palliative care (1-3).

Cisplatin (CDDP) is a key drug for treating esophageal cancer, and it is frequently applied as perioperative, definitive or palliative chemotherapy and as chemoradiotherapy. Although CDDP is highly effective against tumors, it is also associated with gastrointestinal toxicity, ototoxicity, neurotoxicity, myelosuppression and nephrotoxicity (4). Extreme nausea and vomiting are the most frequent adverse side effects of CDDP [chemotherapy-induced nausea and vomiting (CINV)] (5,6). Therefore, the control of such adverse events is essential for treatment success. Combining such therapy with a 5-hydroxytryptamine 3 (5-HT3) receptor antagonists and corticosteroids significantly improves CINV (7). In addition, a novel antiemetic neurokinin-1 (NK-1) receptor antagonist has achieved excellent control of CINV (8). Therefore, antiemetic guidelines recommend a prophylactic combination of these antiemetic drugs to target multiple molecular pathways of emesis when patients undergo highly emetogenic chemotherapy (HEC) (9,10). However, these agents do not completely resolve CINV; patients develop anorexia, nausea and vomiting during HEC and oral intake often decreases.

The exclusion criteria comprised a history of gastrectomy, poor oral intake due to esophageal stenosis, active double cancer, radiotherapy scheduled during the study period, cancerous cachexia, predicted survival ≤3 months, taking other Japanese traditional herbal medicines during the two weeks before recruitment, an allergy to RKT, pregnancy or breast-feeding, or deemed ineligible for this study by an investigator.

This prospective randomized crossover study enrolled 20 patients with esophageal cancer who underwent CDDP-based chemotherapy between July 2013 and March 2016. Figure 1 shows the study design. Eligible patients who agreed to participate in this study were randomly assigned in a 1:1 ratio as follows. Ten were assigned to group A [1st course: RKT 7.5 g/day on days 1–14 ([intervention); 2nd course: without RKT (control)] and 10 were assigned to group B [1st course: without RKT (control); 2nd course with RKT 7.5 g/day on days 22–35 (intervention)]. All patients received CDDP on day 1 of each course and the RKT wash-out period was one week for both courses. Standard antiemetic therapy using 5-HT3 and NK1 receptor antagonists and steroids was provided as usual during both courses, in accordance with ASCO and NCCN guidelines (9,10). The Institutional Review Board at Hiroshima University approved this study (approval No. RIN-390).

Chemotherapy comprised two courses of either CDDP plus 5–fluorouracil (5FU) or CDDP, 5FU and docetaxel (DOC) (Figure 1). The CDDP/5FU regimen consisted of 80 mg/m2/day of CDDP on days 1 and 22 and 800 mg/m2/day of 5FU on days 1–5 and 22–26. The CDDP/5FU/DOC regimen consisted of the CDDP and 5FU regimen described above plus DOC (80 mg/m2/day) on days 1 and 22. All patients were hospitalized for at least six days of chemotherapy administration.

The primary endpoint was the rate of change in dietary (caloric) intake between the control and RKT courses. All patients recorded their total food intake from days 1 through 6. Nurses monitored their oral intake records and a nutritionist estimated daily dietary intake as calories. Caloric intake was compared between the control and RKT courses in the crossover study while the patients were hospitalized.

Secondary endpoints were appetite scores according to a visual analogue scale (VAS), dysgeusia, nausea and vomiting evaluated according to the Common Terminology Criteria for Adverse Events (CTCAE) version 4.0, and plasma levels of AG (fmol/mL). The VAS scores for appetite were continuously scored from 0 (no appetite) to 10 (good appetite), and each patient subjectively judged their scores on days 1–9 and 15 of each chemotherapy course.

The patients fasted from 9:00 PM on the day before the blood test. Plasma samples were collected before breakfast (between 9:00 and 10:00 AM) on days 1, 3 and 8. Blood was sampled on day 8 from outpatients if they had been discharged after chemotherapy. Blood samples were immediately placed in chilled tubes containing disodium ethylenediamine tetra-acetic acid (EDTA) and aprotinin for plasma sampling, then separated by centrifugation (3,000 rpm at 4 °C) for serum sampling. The supernatants were acidified with 10% (v/v) hydrochloric acid (1 mol/L) and stored at −50 °C. Values for AG were determined using Active Ghrelin or Desacyl Ghrelin Enzyme-Linked Immunoassay Kits (LSI Medience Corporation, Tokyo, Japan).

Data from 18 of the patients [male, n=17; female, n=1; mean age ± standard deviation (SD), 62.9±9.7 years] were included in this analysis, because information about caloric intake and ghrelin could not be collected from one patient with deteriorating renal function and one with intracerebral bleeding that developed during the first course of the study and chemotherapy was immediately stopped. Table 1 shows that the clinical characteristics of the patients in groups A and B did not significantly differ because the patients were randomly allocated to each group. 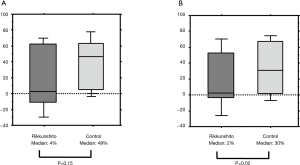 Evaluation of appetite score according VAS and adverse events

CDDP is a key drug for the perioperative, definitive or palliative chemotherapy and chemoradiotherapy of patients with esophageal cancer. Antiemetic 5-HT3 and NK-1 receptor antagonist combined with corticosteroid is standard therapy for CINV caused by CDDP (7,8), but it can cause extreme CINV and decrease oral intake in some patients (5,6). Therefore, this randomized, cross-over prospective study aimed to determine the effects of orally administered RKT, which is a traditional Japanese herbal medicine with orexigenic properties. The cross-over design allowed comparisons and clarification of the effects of control and RKT intervention courses in the same patients and in relatively small samples. We found that RKT helped to improve caloric intake and increase plasma AG levels in patients with esophageal cancer during the delayed phase at three days from staring CDDP-based chemotherapy.

Nausea and vomiting induced by chemotherapy are deleterious side effects that seriously decrease the QOL of patients. They can develop during acute or delayed phases (0–24 and 24–120 hours after chemotherapy, respectively) and result in dehydration, malnutrition, and consequential poor patient compliance with treatment (19,20). Anorexia, similar to the onset of vomiting and nausea, is caused by the action of large amounts of 5-HT release on tissue 5-HT receptors resulting from CDDP administration. Among 5-HT receptors, the activation of 5-HT2b and 5-HT2c plays a major role in CDDP-induced anorexia. The gastric and hypothalamic secretions of appetite-stimulating hormone ghrelin are reduced when these two receptors are activated. Therefore, evidence indicates that exogenous ghrelin, synthetic ghrelin agonists, and the endogenous ghrelin signal-enhancer RKT should play significant roles in the clinical treatment and prevention of anorexia (6). The ability of RKT to prevent CINV and anorexia caused by CDDP-based chemotherapy has been evaluated in patients with various types of cancer (21-24).

RKT is a Japanese traditional herbal medicine (Kampo) that is extracted with hot water from a mixture of eight crude components. It improves symptoms of functional dyspepsia, gastroesophageal reflux disease, anorexia and vomiting (25). The mechanism of action of RKT is a significant increase of plasma ghrelin levels and the upregulation of ghrelin mRNA expression in healthy human volunteers and mice (11). Ghrelin, a 28-amino acid peptide discovered in 1999 by Kojima et al. (17), is an endogenous ligand of the growth hormone secretagogue receptor (GSH-R). Ghrelin is structurally similar to motilin (26) and it is an appetite stimulatory signal from the stomach that triggers a positive energy balance through a central mechanism involving hypothalamic neuropeptides (27). Activated ghrelin exerts powerful appetite-stimulating effects that are mediated by GHS-R type 1a (17) In contrast, desacyl-ghrelin is believed to work as a potential modulator of food intake by opposing the effects of ghrelin independently of GSH-R1a (28,29). RKT and its component 10-gingerol, increase plasma AG levels by inhibiting a circulating ghrelin degrading enzyme and enhancing acyl- to desacyl-ghrelin ratios in rats treated with CDDP (12).

We evaluated VAS scores for appetite and the adverse events of dysgeusia, nausea and vomiting according to CTCAE version 4.0 as secondary endpoints. The results did not significantly differ between the control and RKT courses. None of the patients developed vomiting during any control and RKT courses, and only one patient developed grade 3 nausea in the control course. These findings indicated that standard antiemetic therapy using 5-HT3 and NK1 receptor antagonists and steroids is effective against CINV. However, the caloric intake during both courses with and without RKT significantly decreased daily after starting chemotherapy. Therefore, standard antiemetic therapy alone might not be sufficient to encourage increased oral intake during HEC. The median rate at which food intake decreased between days 4 and 6 was significantly lower in the RKT, than the control course. Therefore, RKT might be able to improve the decrease in calorie intake, especially when associated with delayed-onset anorexia during chemotherapy. Adding RKT to standard antiemetic therapy enabled further improvement in the oral intake of patients with esophageal cancer who were undergoing HEC.

Levels of AG significantly increased between days 3 and 8 in the RKT, compared with the control course, even though they significantly decreased from days 1–3 in both courses. RKT might take several days to exert orexigenic effects and increase plasma AG level. Furthermore, the present findings indicated a close association between RKT and AG because RKT increased oral intake, perhaps by increasing plasma AG levels. This is particularly beneficial during the delayed phase of chemotherapy-induced anorexia.

We also similarly evaluated the effects of RKT on oral intake and levels of plasma AG in 40 patients with lung cancer under CDDP-based chemotherapy, and plan to publish the results, which were similar to those of the present study of esophageal cancers. RKT also improved caloric intake and increase plasma AG levels during the delayed phase of CDDP-induced anorexia in patients with lung cancer. These results suggest that RKT could provide reliable supportive care during HEC for patients with various types of cancer.

In conclusion, RKT improved a delayed-onset decrease in oral intake and increased plasma AG levels among patients with esophageal cancer undergoing highly emetogenic CDDP-based chemotherapy. No adverse events were associated with RKT throughout the study. Thus, RKT should become be an important agent with which to improve the QOL of many patients with esophageal cancer who undergo chemotherapy.

Ethical Statement: The study was approved by the Institutional Review Board at Hiroshima University (approval No. RIN-390).