Although the prognosis of these patients differs depending on the histological findings of the underlying type of IP, obtaining tissue samples for histological evaluation from patients with acute respiratory failure is difficult (6). Thus, non-invasive biomarkers that can accurately predict the prognosis are needed. Although serum Krebs von den Lungen-6 (KL-6), serum heat shock protein (HSP)-47 and arterial carboxyhemoglobin have been reported as biomarkers, clinical biomarkers have not been established (7-9).

The Charlson comorbidity index (CCI) is a summed score of 19 comorbidities weighted according to severity (10). The CCI was developed to assess risk of death from comorbidities and it has been widely applied as a prognostic indicator for patients with colorectal cancer, advanced non-small cell lung carcinoma and acute myocardial infarction (11-13). However, the relevance of CCI to the prediction of acute phase of IP is unknown.

The present study retrospectively investigated which of the clinical parameters of sex, age, diagnosis, blood biomarkers, high-resolution computed tomography (HRCT) scores and CCI could help predict prognosis at the time of steroid pulse therapy. In addition, we attempted to construct a scoring system that could predict 3-month mortality more accurately by combining parameters determined to be significantly prognostic in the present study.

The diagnosis of IIPs was confirmed by physical findings, serological testing, HRCT finding, and lung biopsy specimens, based on the official statement for IIPs including IPF (1,15). However, patients whose lung biopsy could not be performed due to acute respiratory failure were diagnosed based on the radiological classification (1,15). The diagnosis of CVD-IP was confirmed by physical findings, serological testing, and HRCT findings that were consistent with IP. Histological evaluation of lung biopsy specimens was undertaken for the exclusion of other specific diseases. The diagnosis of drug-induced lung injury and acute hypersensitivity pneumonitis (AHP) were based on the previous reported criteria (16,17). AE of IIPs including IPF and NSIP and AE of CVD-IP was defined as unexplained worsening of dyspnea; hypoxemia or worsening or severely impaired gas exchange; new alveolar infiltrates on radiograph; and absence of an alternative explanation such as infection, pulmonary embolism, pneumothorax, or heart failure (1-5). The cause of AE was divided into idiopathic, infection, and aspiration (18).

The Institutional Review Board at Yokohama City University Hospital approved this study (approval number B171100003). In all patients, consent for participation of this retrospective study was obtained by disclosing a clinical study including the description of opt-out (https://www.yokohama-cu.ac.jp/amedrc/ethics/ethical/fuzoku_optout.html).

Among 68 patients, 45 were diagnosed with acute or subacute IIPs including 17 of AE of IPF and 28 of other IIPs (AE of idiopathic NSIP, n=18; AIP, n=6; COP, n=4). The remaining 23 patients had 16 of AE of CVD-IP and 7 of other IPs (drug-induced, n=6; AHP, n=1). CVD-IP included 6 of rheumatoid arthritis, 5 of anti-neutrophil cytoplasmic antibodies associated vasculitis, 4 of polymyositis/dermatomyositis, and 1 of Sjögren syndrome. The causes of AE were 44 of idiopathic, 5 of infection, and 2 of aspiration. All patients were treated with steroid pulse therapy. Table 1 shows the clinical characteristics of the patients. Table 2 showed clinical difference between patients with IPF, other IIPs, and CVD-IP groups. There were no significant differences in clinical parameters other than honeycomb score. 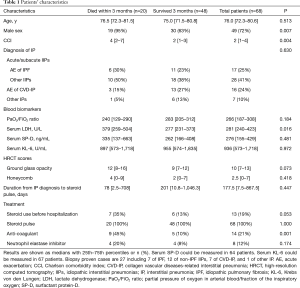 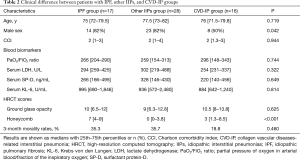 Survival curves for each clinical parameter including CCI, serum LDH, and sex

The AUC value was 0.722 in the evaluation of CCI as a predictor of 3-month mortality (Table 4). The optimal cut-off CCI for estimating 3-month mortality was 4, with 60% sensitivity and 85% specificity. We assigned the 68 patients to groups with either low CCI (n=49) or high group (n=19) CCI based on this cut-off. Log-rank tests showed that Kaplan–Meier survival curves of these groups significantly differed (P<0.001; Figure 1A). The 3-month mortality rates were 16.3% and 63.2% for the groups with low and high CCI, respectively. 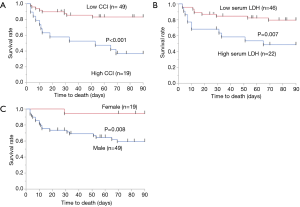 The clinical relevance of CCI according to types of IP 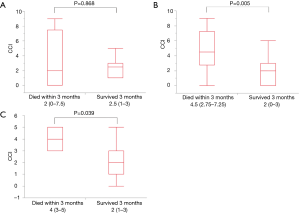 Comparison between high and low CCI 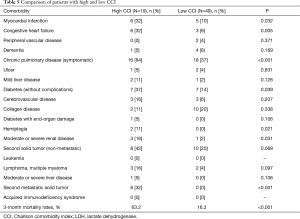 Figure 3 Comparison of patients of 3-month mortality according to the composite scoring system. The composite score is the global score obtained by the score calculated from each parameter, ranging between 0 and 3: CCI (<4, 0; ≥4, 1), sex (female, 0; male, 1), serum LDH (<377, 0; ≥377, 1). Patients were categorized into three groups based on the composite score: stages I [0–1], II [2], and III [3]. In addition, we compared 3-month mortality rate among the three stages. Three-month mortality rates of patients with the stages I, II, and III were 8%, 54% and 86%, respectively (P<0.001). CCI, Charlson comorbidity index; LDH, lactate dehydrogenase.

The purpose of evaluating clinical biomarkers for patients with IP is to predict the risk of developing AE and the prognosis of patients with AE and to diagnose AE. For example, elevated serum KL-6 or serum D-dimer have been associated with the risk of developing AE (19,20). Serum HSP-47, serum procalcitonin, or arterial carboxyhemoglobin are helpful to diagnose AE (8,9,21). Although serum LDH, serum KL-6, PaO2/FiO2 ratio and the extent of abnormal HRCT findings are important for 3-month mortality predictors of AE-IPF (7), there are no multicenter study that examining biomarkers that can predict prognosis at the time of diagnosis of AE in the clinical setting. Therefore, we evaluated which of the clinical parameters of sex, age, diagnosis, blood biomarkers (LDH, SP-D, KL-6, and PaO2/FiO2 ratio), HRCT scores, and CCI might predict prognosis at the time of being diagnosed with an AE in a multicenter study.

We speculated that comorbidities would affect the prognosis of patients who are treated for AE-IP, but little is known about the relationship between prognosis and comorbidities in such patients. The CCI might serve as an important factor in predicting long-term prognosis in patients with ILD (25,27-29). A retrospective analysis of 224 patients with IP identified CCI as a prognostic factor for patients with chronic IP without honeycomb lung, although the prognosis of IPF was not affected by comorbidities (27). Others have associated CCI with post-discharge mortality among patients with acute respiratory worsening of fibrotic ILD (28). Cardiovascular disease and congestive heart failure are also useful for predicting AE onset (25,29). We found a significantly higher incidence of myocardial infarction and congestive heart failure among patients with a high CCI. We also found a significant difference in the frequency of secondary metastatic solid tumors between patients with high and low CCI. One study of 103 patients with IPF identified lung cancer as a complication that did not affect the prognosis after being diagnosed with IPF (30). In contrast, another study that investigated the influence of respiratory comorbidities on the mortality rates of hospitalized patients with IPF using the Japanese diagnostic procedure combined with a per-diem payment system database significantly related lung cancer complications with a poor prognosis among patients hospitalized with IPF (31). Although further studies are necessary to clarify these controversial results, having a history of complications including cardiac disease and malignant tumors, and evaluations of complications are probably extremely important when considering the treatment of patients with AE-IP.

Composite approaches have been developed using peripheral blood biomarkers, physiological, and radiographic measurements to provide more accurate prognostic information (32). Kishaba et al. reported the composite scoring system which was based on serum LDH (cut off value, 280 IU/L), KL-6 (cut off value, 1,000 IU/L), ratio of partial pressure of oxygen and fraction of inspiratory oxygen (cut off value, 100), and extent of abnormal HRCT findings, was a clinical prognostic factor associated with 3-month mortality in patients with AE-IPF (7). In the present research, we found that CCI is important in addition to sex and serum LDH for predicting 3-month mortality among patients and the composite scoring including these parameters could be useful for predicting the prognosis. Because CCI, serum LDH, and sex are all simple and objective parameters unlike HRCT findings, the composite scoring system including these parameters may be suitable to the clinical setting.

In the meantime, this retrospective study of a small patient cohort from two institutions has some limitations. First, our study is limited by the small number of patients and the absence of additional validation data sets. In order to verify the generalizability of our findings, large-scale, multi-institutional prospective collaborative research is essential. Second, the clinical diagnoses of the enrolled patients were heterogeneous. Therefore, the clinical relevance of CCI should be evaluated by histopathological diagnoses (for example, IPF alone), although IP subtypes were not significant predictors of 3-month mortality in this research.

Ethical Statement: The Institutional Review Board at Yokohama City University Hospital approved this study (approval number B171100003). In all patients, consent for participation of this retrospective study was obtained by disclosing a clinical study including the description of opt-out (https://www.yokohama-cu.ac.jp/amedrc/ethics/ethical/fuzoku_optout.html).