Minimally invasive esophagectomy (MIE) has been performed with increasing frequency worldwide since Cuschieri et al. first reported a thoracoscopic mobilization of the esophagus (1). As one of the most common MIE procedures, thoracoscopic-laparoscopic esophagectomy (TLE) is performed on 38.3% of those patients with advanced cancer according to the latest report of the Japanese Association for Thoracic Surgery, and the number of surgeries performed for superficial or advanced cancer has recently been increasing (2). Indeed, having an experienced surgeon can be a predictive factor of better postoperative outcomes of esophagectomy, due to better lymph node retrieval, less blood loss, and shorter operation duration (3-5). The aim of this study was to contribute to the standardization of esophagectomy in esophageal cancer (EC) by showing the procedures of TLE and two-field lymph node dissection (EC).

A 57-year-old male presented with a history of progressive dysphagia for more than 1 month. Preoperative examinations are shown in Figure 1. Endoscopy and narrow-band imaging (NBI) found eminence lesions in the esophageal mucosa 29–32 cm from the incisor, and the biopsy revealed esophageal high-grade intraepithelial neoplasia. The computed tomography (CT) scan of the chest and abdomen showed a 3.0 cm × 1.8 cm × 1.5 cm mass located at the middle thoracic esophagus, and there was no evidence of metastasis and lymph-node enlargement. Preoperative diagnosis was middle thoracic esophageal carcinoma, stage II (cTNM: T2N0M0) according to the 8th edition of the AJCC staging protocol (6).

The operation was performed under general anesthesia and single-lumen endotracheal intubation. For the initial thoracoscopic phase, the patient was placed in a semi-prone position (Figure 2A) with artificial pneumothorax, in order to better visualize the esophagus. We cauterized the mediastinal pleura, and the esophagus was mobilized away from the mediastinum. In order to obtain the best circumferential margin, the dissection is not carried out along the esophagus but rather along the surrounding landmark structures (7). We dissected the diaphragmatic node (15th lymph nodes) along the pericardium, and made sure the bilateral crura could be seen. We then cauterized the superior mediastinum pleura along the vagus nerve to the intersection of the vagus nerve and subclavian artery. This was followed by skeletonizing the right recurrent laryngeal nerve carefully by using endoscopic dissecting forceps, and then dissecting the right upper paratracheal nodes (2R lymph nodes) completely (Figure 2B). Next, we skeletonized the arcus venae azygos and ligated it with 10-mm ligaclips, and dissected the post tracheal nodes (3p lymph nodes). For the purpose of dissecting the left upper paratracheal nodes (2L lymph nodes), we suspended the esophagus by silk suture through the trocar hole (Figure 2C), and the dissection was carried out along the left side of the trachea. The alternate use of the ultrasound scalpel and endoscopic scissors was a good choice to protect and skeletonize the left recurrent nerve. The left lower paratracheal nodes (4L lymph nodes) that were lying on the space between the top of aortic arch and the carina were dissected by the ultrasound scalpel (Figure 2D,E). After that, we dissected the subcarinal nodes (7th lymph nodes) that were lying on the caudal to the carina of trachea. After dissecting the esophagus and mediastinal lymph nodes, the thoracic duct was, as per routine, mass-ligated immediately above the diaphragmatic hiatus (Figure 2F). A chest tube with a diameter of 22 Fr was placed at the mediastinum and the chest incision was sutured, thus finishing the thoracoscopic procedure. 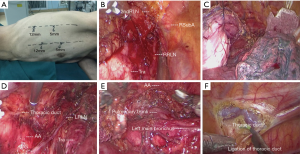 After completing the procedure, the patient was rotated to a supine position, with the neck extended and turned toward the right (Figure 3A). In the laparoscopic phase, the entire greater curvature of the stomach was first mobilized, followed by division of the omentum. Then, we dissected the lymph nodes from the common hepatic artery to the left gastric artery, including the proximal splenic artery and the celiac artery. All these nodes, including the common hepatic nodes (18th lymph nodes), the splenic nodes (19th lymph nodes), the left gastric nodes (17th lymph nodes), and the celiac nodes (20th lymph nodes) were dissected en bloc (Figure 3B). The left gastric vessels were divided after ligation with hem-o-lok clips. Lastly, the right and left crura of the diaphragm were dissected, and the abdominal cavity was linked to the mediastinum. 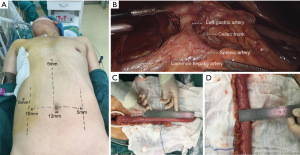 Figure 3 Laparoscopic procedures of thoracoscopic-laparoscopic esophagectomy. (A) In the laparoscopic procedure, the patient was rotated to a supine position, with the neck extended and turned toward the right; (B) after dissection of the 17th, 18th, 19th, and 20th lymph nodes en bloc; (C,D) formatting the gastric tube with a line stapler, with a width of 3 cm and a length of 35 cm.

A 5-cm oblique incision along the anterior border of the left sternocleidomastoid muscle was made. The neck esophagus was mobilized and transected. After placing the anastomat component in the proximal end, the distal end was connected with a belt. Subsequently, the subxiphoid incision was enlarged to 3 cm, the esophagus and stomach were pulled out, and the gastric tube was formatted with a stapler, with a width of 3 cm and a length of 35 cm (Figure 3C,D). Next, the gastric tube was pulled up to the left neck through the posterior mediastinum. After completing the esophagogastric anastomosis with a circular stapler, we closed the gastric stump with a stapler and placed an 18 Fr drainage tube in the neck incision. The video of the procedures was attached in Figure 4. 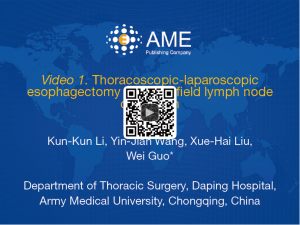 As one of the most common MIE procedures, TLEs have been demonstrated to be more feasible, safe, and have more oncologic efficacy than open esophagectomy (9). The benefits of TLE have gradually been accepted with ongoing improvements in the surgical instruments and skills required for the procedure.

The main approaches were similar to those described previously (10); however, there were some points of difference. Firs, single-lumen endotracheal intubation and artificial pneumothorax were used to obtain a better exposure of the post mediastinum. Second, for protecting the right and left recurrent laryngeal nerve, we skeletonized using the method of hollow-out with endoscopic dissecting forceps and not with energy equipment (ultrasound scalpel, electrical knife, etc.). Third, when we dissected the 2L lymph nodes, we suspended the esophagus by silk suture through the trocar hole, and cauterized the membranous tissue along the left side of the trachea. This way, we believe that a better visualization can be achieved in comparison to no-suspension of the esophagus. Moreover, the thoracic duct was routinely mass-ligated above the diaphragmatic hiatus to prevent postoperative chylothorax (11). Finally, we dissected the abdominal lymph nodes en bloc, including the 17th, 18th, 19th, and 20th lymph nodes, and not only dissected the nodes completely, but also avoided any disintegration.

Currently, the majority of esophagectomies in our department are performed by TLE, and, as for the learning curve we had described previously (3), after performing 60 cases of thoracoscopic esophagectomies, the surgeon reached sufficient proficiency to improve the postoperative variables. This study may provide some technical references for the surgical treatment of EC. However, we must admit that comprehensive therapy and a multidisciplinary team are also of great benefit to the long-term survival of EC patients.

Conflicts of Interest: This video was granted the Award of Excellence in the 2017 AME-Medtronic Minimally Invasive Esophageal Surgery Video Contest.

Informed Consent: The patient was informed that his or her clinical data could be used for various clinical studies, and written informed consent for this report was obtained on this basis.