Fractional exhaled nitric oxide was not associated with the future risk of exacerbations in Chinese asthmatics: a non-interventional 1-year real-world study

Asthma is a chronic inflammatory disease of the airways characterized by variable airway obstruction and hyper-responsiveness. Although the majority of asthmatics fulfil symptomatic control, others, for a variety of reasons, still suffer from recurrent exacerbation (1). Asthma exacerbations generate considerable morbidity, having a great impact on the quality of life of patients, and are the main cause of healthcare utilization in asthmatics (2). Therefore, prevention of exacerbations is a major goal in the management of asthmatics.

It is accepted that poor asthma control is a factor predicting future exacerbations (3). Poor adherence to the use of inhaled corticosteroids (ICS) (4), previous exacerbations (5,6), low FEV1% predicted (7,8), and hospitalization or emergency-room visit (9) are also considered as major predictors of future asthma exacerbations.

Asthma control is generally reflected by reported symptoms and lung function indices. Measurement of fractional exhaled nitric oxide (FENO) is a quantitative, non-invasive, easy to perform, and safe method of measuring airway inflammation (10-12). The over-expression of inducible nitric oxide synthase is the major incentive for the increase of FENO of asthmatics (13,14). In general, the measurement of FENO aid in identifying type 2 airway inflammation with asthmatics (15,16). FENO provides additional benefits for asthmatics management, including but not limited to discover eosinophilic airway inflammation (12,17). Studies have shown that FENO is helpful to diagnose asthma (18). Furthermore, it has been shown that FENO level is associated with increased risk of exacerbation (15,19). Bjerregaard et al. demonstrated that high FENO at baseline was associated with an increased risk of future virus-induced exacerbations in patients with stable disease (15). Gelb et al. showed that combined FENO and FEV1% predicted can stratify the risk for exacerbations in patients being treated for asthma (20). Compared to the studies mentioned above in which the phenotype and severity of a disease were narrowly defined, non-interventional real-world studies which include patients across the full clinical spectrum of asthma may well be able to more fully represent the disease. As we know, no real-world study has assessed the association between FENO, spirometry indices, and the future risk of exacerbations specifically in Chinese asthmatics.

Thus, the purpose of the prospective study with a follow-up of 1 year was to assess factors associated with future exacerbations of Chinese asthmatics. In particular, we aimed to evaluate the roles of spirometry and FENO in predicting exacerbations.

Patients with chronic persistent asthma to whom at least used one ICS was dispensed as monotherapy (ICS alone) or in a fixed combination with a long-acting beta-agonist (LABA, ICS/LABA) were recruited from October 2016 to July 2017 from the respiratory clinic of Southern Medical University, Nanfang Hospital (Guangzhou, China). This study was approved by the ethics committee of the hospital (code number NFEC2016-052), and all subjects have given their written informed consent prior to participation in the study. In case of minors, parents were informed and gave written consent.

The clinical information including demographic data, smoking history, comorbidities, preceding medicine usage, asthma severity, and medicine adherence were collected. FENO measurements and spirometry indices were performed at baseline. After the initial visit, patients were seen four more times at 3-month interval. Patients were regularly contacted by phone calls or text messages to remind them that they are participating in the study, and of their clinic visits. All patients were followed by the same physician to decide whether they had exacerbations, during the study period. Exacerbations were evaluated using information modified from the Global Initiative for Asthma (GINA) guideline (21) and the American Thoracic Society/European Respiratory Society (ATS/ERS) (12). Exacerbations were defined as an episode of aggravating symptom needed parenteral corticosteroid, an increase in systemic corticosteroids from a stable maintenance dose, ≥3 days of oral corticosteroid (OCS) use, or hospitalization or emergency-room visit. Adherence was defined as the extent to which patients act in line with the prescribed interval and dosing regimen, according to the International Society for Pharmacoeconomics and Outcomes Research (22). Overall mean adherence was defined as the percentage of prescribed inhalations that were taken. This measure was divided into two categories (>80% and <80%); good adherence was defined as above 80% adherent (23,24). Asthma treatments were regulated according to the Chinese Asthma Prevention and Treatment guidelines 2016 (25). Briefly, if good asthma control has been achieved and maintained for at least three months, step-down of the treatment was taken into account. If asthmatics were in persistent symptoms and/or exacerbations, common problems such as inhaler technique, persistent allergen exposure, and compliance have been addressed, step-up of the treatment were considered.

Exclusion criteria were: (I) premature birth; (II) a history of any other lung disease except asthma; (III) the presence of serious systemic or chronic diseases, such as cardiorespiratory diseases, metabolic disorders, immunosuppression; (IV) symptoms of upper respiratory tract infection, for instance, rhinorrhea, fever and rhinobyon within 4 weeks, or used systemic corticosteroids within the prior 8 weeks; (V) difficulty in completing the questionnaires for any reason.

FENO was analyzed using a NioxMinor instrument (Aerocrine, Solna, Sweden) following the recommendations of the ATS/ERS (12) using the mean of two measurements. Measurements of FENO were performed before spirometry. Patients with high and low FENO level were defined by cut-off value of 25 ppb by ATS.

We used the Asthma Control Test (ACT) questionnaire to measure asthma control (26). The ACT score is a five-item questionnaire filled out by patients; activity limitation, shortness of breath, nighttime symptoms, use of rescue medication, and the patient’s overall scores for asthma control. Each item contains five corresponding answers options.

Non-normally distributed data were expressed as median (inter-quartile range, IQR), and comparisons were made using the Mann-Whitney U-test. Logistic regression analyses were used to identify the variables associated with the outcome (asthma exacerbation). For all analyses, a P value of <0.05 was considered statistically significant.

Baseline characteristics of the study subjects

Two hundred and forty-six patients were randomly enrolled. Of these, 24 patients did not complete the study protocol (1 had bronchiectasis, 1 had nephrotic syndrome, 2 withdrew because of pregnancy, and 20 were lost to follow up). In total, 222 patients completed the study (Figure 1). 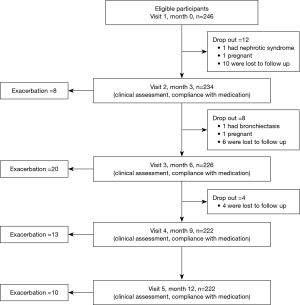 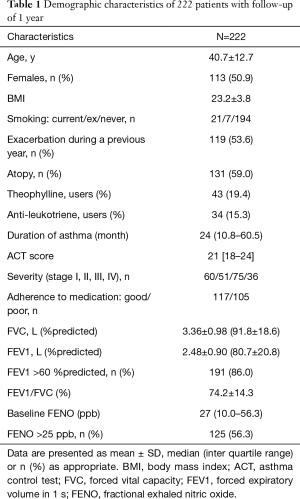 Characteristics of patients with and without exacerbations

We compared demographic data between patients with and without asthma exacerbations (Table 2). 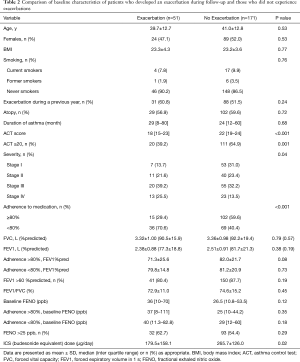 We used multivariate logistic regression analyses to identify the association between clinical parameters of baseline patients’ characteristics and asthma exacerbations.

To our knowledge, this is the first prospective 12 months follow up study to evaluate the risk factors of asthma exacerbations in real-world in China. The results showed that poor control of symptoms and nonadherence to asthma medication, rather than FEV1% predicted and FENO, increased risk of exacerbations in the study period.

In this study, 47.3% of the patients ICS was <80% and 70.6% of patients who developed an exacerbation had poor adherence. Our findings are consistent with previously published studies that reported compliance ranges from 6% to 70% (27-31). Laforest et al. prospectively noted less than 25% of patients continuously using ICS over 1 year (29). Our study was limited to asthmatics lived in Guangzhou for more than 2 years, which may partly explain the higher medication compliance. And we provided interventions such as follow-up office visits, phone calls and text messages regularly to remind them that they are participating in the study. These patients may be more conscious of the potential severity of the disease and the necessity to take drugs as directed, leading to higher persistence rates. And our findings of adherence focus on the conception that medication corresponds to use, and patients subjectively evaluated their compliance, this means that discontinuation treatment might be even worse than reported. Corrao et al. performed a population-based study and showed that consistent use of ICS reduces the risk of exacerbations (32). Costa et al. demonstrated an association between poor adherence to medicine and exacerbation in asthmatic children (33). van der Merwe et al. performed a case-control study that demonstrated an association between reduced treatment adherence and severe life threatening asthma exacerbations (34). The results of the current study also demonstrated poor adherence to ICS was a significant risk factor of asthma exacerbation.

The study has several limitations. One limitation of this study is about the selection of the population. Since this is a single-center study, the studied population characteristics may be vary from the general population. Therefore, it is necessary to carry out larger multicentre studies. Another limitation is that there is no standardized approach to measure persistence rates, and each approach has its advantages and disadvantages (22,39). In the current study we simply stratified adherence of ICS as <80% and >80%. Also, if patients could not come to the respiratory outpatient clinic medication usage was determined by phone administration of questionnaires. In addition, we did not measure peripheral blood eosinophils, peak expiratory flow variation and airway reversibility. Besides, as a result of the variable nature of airway obstruction and inflammation with asthmatics, the fluctuation of FENO can’t justify a change in treatment. Finally, due to the lack of routine monitoring of asthmatics, such as FENO, PEF monitoring, spirometry, recording an exacerbation mainly relied on patients contacting the doctor when they had worsening and uncontrolled symptoms. It is possible the exacerbation rate may have been higher than recorded. However, we contacted patients regularly by phone to remind them that they are participating in the study. The advantage of this study is that it prospectively followed up patients with asthma in different population, which representing the daily clinical scenario experienced by most respiratory physicians.

In conclusion, in this non-interventional real-world study, baseline measurements of FEV1% predicted and FENO may not help to predict risk for future asthma exacerbations. Future multicenter studies are needed to confirm our results. Additionally, the present study showed that asthma exacerbations within the next 1 year were significantly more common in patients with poor symptom control and poor adherence to medications.

The authors would like to thank Professor Chunquan Ou of the Biostatistics Laboratory, School of Public Health, Southern Medical University, the patients and others who cooperated in performing this study.

Ethical Statement: This study was approved by the ethics committee of the hospital (code number NFEC2016-052), and all subjects have given their written informed consent prior to participation in the study.