World No Tobacco Day 2019 puts the spotlight on lung health

The focus of World No Tobacco Day 2019 was on “tobacco and lung health”. The campaign aimed to increase awareness on the negative impact that tobacco has on people’s lung health, from cancer to chronic respiratory disease, and on the fundamental role lungs play for the health and well-being of all people (1).

Tobacco is a leading risk factor for lung diseases

Tobacco is deadly in any form and threatens the lung health of everyone. Respiratory diseases are among the leading causes of death globally, and tobacco is a major risk factor (2). Tobacco smoke causes reduced lung function and breathlessness due to the swelling of airways and build-up of mucus in the lungs. These harmful effects of tobacco smoke on the lungs are almost immediate. However, the immediate respiratory symptoms are just part of the damage tobacco does to the lungs, as it also contributes to the development of lung cancer and chronic lung deterioration. Moreover, tobacco smoke contributes to indoor air pollution, which is a major threat to lung health. Every year, 1.2 million deaths are caused by second-hand smoke globally (3). Even more distressing than the millions of deaths caused by tobacco-related respiratory diseases is the terrible suffering caused by these illnesses. The debilitating effects of these diseases impact the quality of life of people of all ages, in all regions of the globe.

Globally, 1.8 million deaths are caused by lung cancer annually (4). Tobacco smoking is the primary cause of lung cancer, causing roughly 1.2 million lung cancer deaths every year (4). Smokers are up to 22 times more likely than non-smokers to develop lung cancer in their lifetime (5-9). Non-smokers exposed to second-hand smoke at home or in the work place have a 30% increased risk of developing lung cancer (10,11). After 10 years tobacco-free, the risk of lung cancer is reduced to about half that of a smoker (12).

COPD is an irreversible lung disease that causes episodes of breathlessness, coughing, and mucus production. These episodes are seriously disabling and can last from several days to months, and sometimes result in death from respiratory failure (13). In 2016, it was estimated that over 251 million people live with COPD (13). Tobacco smoking is the decisive risk factor for COPD, causing the swelling and rupturing of the air sacs in the lungs, which ultimately reduce the lungs’ capacity to take in oxygen and expel carbon dioxide (14). It also causes the build-up of pus filled mucus in the lungs, resulting in a painful cough and agonizing breathing difficulties (15).

One in five smokers will develop COPD in their lifetime (16), and almost half of COPD deaths are attributable to smoking (17). Adults who were exposed to second-hand smoke during childhood, and had frequent lower respiratory infections as a result, are at risk for developing COPD. People who started smoking in their youth or adolescence are especially susceptible to the development of COPD, as a result of reduced lung growth and function (18). Most cases of COPD are preventable by avoidance or early cessation of tobacco smoking and indoor air pollution. Following smoking cessation, patients with COPD experience increased lung function and reduced morbidity (13).

Asthma is a chronic disease of the air passages to the lungs, sustained by bronchial inflammation and resulting in recurrent attacks of breathlessness and wheezing (19). WHO estimates that 235 million people currently suffer from asthma. Inhaling tobacco smoke is one of the major triggers for developing and exacerbating asthma. In people living with asthma, tobacco smoking further restricts activity, contributes to work disability, and increases the risk for severe asthma attacks requiring emergency care. Around one in nine asthma deaths can be attributed to tobacco smoking (17). Patients with asthma experience greater asthma control following tobacco cessation.

Effects of tobacco smoke in children and adolescents

Before they even learn to walk, children begin to suffer the effects of exposure to tobacco. Infants born to mothers who smoke, or are exposed to second-hand smoke during pregnancy, are likely to experience reduced lung growth and function. Exposure to chemicals found in tobacco smoke during critical developmental stages in utero has long-lasting, damaging effects to the lungs. Every year, an estimated 60,000 children die before the age of 5 from lower respiratory infections caused by exposure to second-hand smoke (22). Children of parents who smoke suffer reduced lung function, which will eventually yield chronic respiratory disorders in adulthood.

Adolescents who smoke increase their chances of suffering chronic respiratory disorders and risk permanently damaging their lungs. The lungs continue to grow well into adulthood, but inhaling the toxins found in tobacco smoke slows this process and causes irreversible lung damage.

Tobacco control has to be scaled up globally

Tobacco kills over 8 million people every year (3) and despite a steady reduction in the prevalence of tobacco use globally, the number of smokers remains stable because of population growth. Between 2000 and 2016, global smoking rates have declined from 27% to 20%. However, the pace of action in reducing tobacco demand and related death and disease is lagging behind global and national commitments to reduce tobacco use by 30% by 2025 (23).

Reducing tobacco use is a priority indicator for one of the three strategic priorities under WHO’s 13th Global Programme of Work—1 billion more people enjoying better health and well-being. The World Health Organization’s Framework Convention on Tobacco Control (WHO FCTC) provides a strong, concerted response to the global tobacco epidemic and its enormous health, social, environmental and economic costs. It also gives Parties the necessary foundation and framework—both legal and technical—to enact comprehensive, effective tobacco control measures spanning all sectors of government.

To help countries implement the WHO FCTC on the ground, WHO introduced the MPOWER technical package, which combines policy change with increased public awareness, in line with the key demand reduction measures of the WHO FCTC. Key strategies of this approach include creating smoke-free indoor public places, banning tobacco advertising promotion and sponsorship, significantly increasing tax on tobacco products, and requiring pictorial health warnings on all tobacco products.

The GARD is part of the global work to prevent and control chronic diseases. Most of the chronic respiratory diseases are under-diagnosed, under-treated and the access to essential medications in many countries is poor, and a global effort to improve the diagnosis and the medical care is needed. GARD is a voluntary group of organizations, institutions and agencies that work together to assess need, increase awareness, advocate for action, and formulate and adopt policy to improve global lung health (24).

In order to achieve the Sustainable Development Goal target of a one-third reduction in premature mortality from non-communicable diseases by 2030, tobacco control and lung health must be a priority for governments and communities worldwide. Currently, the world is not on track to meet this target (25).

Countries should respond to the tobacco epidemic through full implementation of the WHO FCTC and adoption of the MPOWER measures at the highest level of achievement, which involves developing, implementing, and enforcing the most effective tobacco control policies aimed at reducing the demand for tobacco. Countries should prioritize diagnosis and treatment of lung diseases, with a focus on primary health care and through universal health coverage.

The best measure to prevent respiratory diseases and improve lung health globally is to avoid tobacco use and exposure to tobacco smoke (Figure 1). 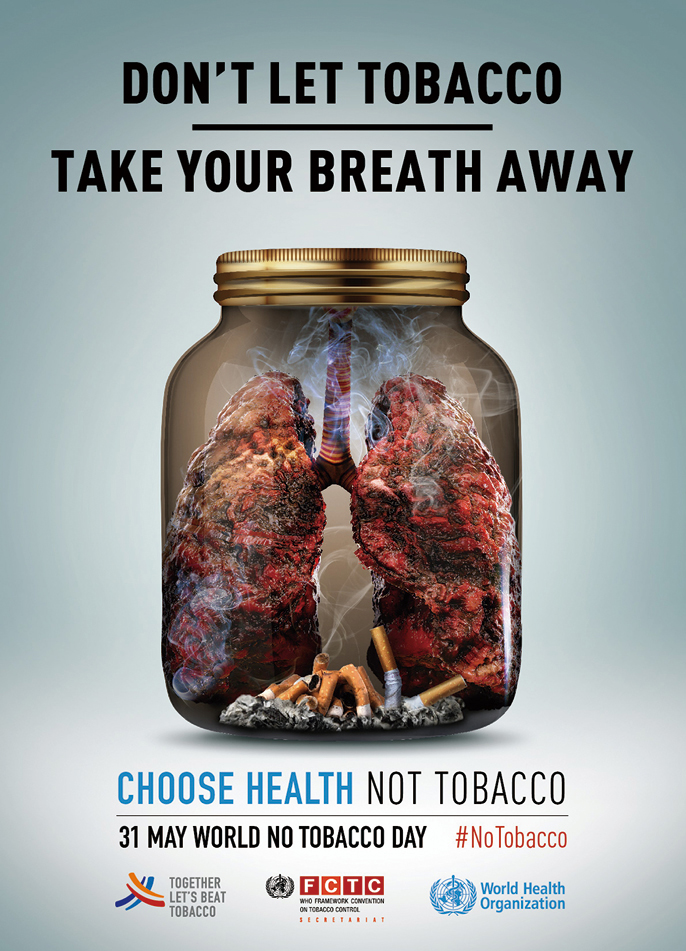