Sodium chloride is a poison to all people when given in large doses, and occasionally very toxic in small doses to a certain class of cases (sepsis) (1).——Trout (1913)

In the ANDROMEDA-SHOCK study, Hernández et al., randomized 424 patients presenting with septic shock to one of two resuscitation strategies—the peripheral perfusion group and the lactate-guided group—for the first eight hours of management (2). End-organ perfusion was assessed using capillary refill time or “lactate clearance” respectively. If perfusion was deemed to be inadequate, the patients received fluid boluses until they were considered to be fluid non-responsive at which point they received vasopressor agents. The lactate-guided strategy led to a higher volume of fluid administered and the greater use of vasopressor agents, however this approach failed to improve patient outcomes. The 28-day mortality was 34.9 percent in the peripheral perfusion group and 43.4 percent in the lactate group (95% CI, 0.55 to 1.02; P=0.06). There was less organ dysfunction at 72 hours in the peripheral perfusion group as evidenced by a mean72-hour Sequential Organ Failure Assessment (SOFA) score of 5.6 vs. 6.6 (95% CI, −1.97 to −0.02; P=0.045).

The ANDROMEDA-SHOCK study (2) was modeled according to the Surviving Sepsis Campaign Guidelines which propose guiding hemodynamic resuscitation by repeated measurement of blood lactate every 2 to 4 hours until normalization (3). The goal of lactate guided resuscitation is to normalize or decrease lactate levels by 20% every 2 hours. This goal is supposedly achieved by repeated boluses of crystalloids to achieve the desired decline in blood lactate levels. Surprisingly, this approach is devoid of any pathophysiologic basis, has no scientific underpinning and is based on myths which have been clearly debunked. Furthermore, as evidenced by the ANDROMEDA-SHOCK study, this approach will lead to volume overload with an increased risk of organ dysfunction and death (4). Lactate guided resuscitation in patients with severe sepsis and septic shock is based on the cascading myths that an elevated blood lactate level is a consequence of organ hypoperfusion with inadequate oxygen delivery and with the consequent anaerobic production of lactate. It follows from this reasoning that hyperlactemia must be treated by aggressive fluid resuscitation with the goal of increasing cardiac output and oxygen delivery, and that this process must be intensified until the blood lactate level has normalized. However, numerous clinical and experimental investigations have been unable to demonstrate an association between an increased blood lactate concentration and evidence of tissue hypoxia (5).

It seems like clinicians, researchers and the authors of clinical guidelines don’t learn from the mistakes of the past, as we have been down this road before. In the 1980’s, based on observational studies in surgical patients, William Shoemaker and colleagues (6), popularized the idea of driving up oxygen delivery (to supranormal levels) in critically ill patients including those with sepsis. Studies in trauma patients demonstrated that this strategy did not improve overall outcome (7). Similarly, in a study published over 20 years ago, Gattinoni et al. demonstrated that a trial of goal-orientated hemodynamic therapy did not improve the outcome of critically ill patients (8). Hayes et al. performed a randomized controlled trial in which critically ill medical patients were randomized to “supranormal oxygen delivery” or usual care (9). While there was a significant increase in oxygen delivery in the supranormal group, oxygen consumption remained unchanged with a substantial increase in mortality in this group of patients. Ronco et al. demonstrated that increasing oxygen delivery in septic patients with an increased blood lactate level neither increased oxygen consumption nor decreased lactate levels (10). Similarly, in a group of patients with sepsis and hyperlactemia, Marik and Sibbald demonstrated that blood transfusion failed to increase oxygen consumption nor result in a decline in blood lactate concentration (11). In an elegant analysis of data from the ALBIOS study, Gattinoni et al. demonstrated that hyperlactatemia in sepsis is “caused more frequently by impaired tissue oxygen utilization, rather than by impaired oxygen transport” (12). Furthermore, these authors state that “the current strategy of fluid resuscitation could be modified according to the origin of excess lactate”. Morelli and coworkers randomized patients with refractory septic shock to an esmolol infusion (selective β1 antagonist) or placebo (13). Oxygen delivery fell in the esmolol as compared to control patients, yet “paradoxically” the decline in the lactate levels was greater in the patients treated with esmolol. These studies provide strong evidence that hyperlactemia in sepsis is unlikely to be associated with inadequate oxygen delivery and that attempts at increasing oxygen delivery may be harmful. Remarkably, the first author of the ANDROMEDA-SHOCK study has previously stated that “seeking to lower lactate levels (by whatever means given the multiple events that regulate its blood levels) has no credibility and no logic in terms of hemodynamics, bioenergetics, or tissue protection” (14).

These data suggest that an alternative explantation must exist for the hyperlactemia of sepsis (15,16). Indeed, a growing body of evidence suggests that sepsis is characterized by bioenergetic failure rather than inadequate oxygen delivery. Abnormalities of energy metabolism, together with mitochondrial dysfunction with multiple abnormalities of the Krebs cycle enzymes and electron transport chain underlie this bioenergetic failure (16,17). This process is further driven by β2 adrenergic mediated glycogenolysis with increased production of glucose and pyruvate. These observations likely explains the lack of ischemic necrosis found at autopsy in patients who have died from sepsis (18). Furthermore, it explains the finding of acute kidney injury in patients with sepsis despite maintained renal blood flow (18). The proximal convoluted tubule has amongst the highest number of mitochondrion per cell and is therefore highly vulnerable to biogenetic failure (17).

It is important to emphasize that severe sepsis and septic shock are primarily not volume depleted states (19), and that titrating fluids to a blood lactate level or markers or peripheral perfusion (i.e., both arms of the ANDROMEDA-SHOCK study) will result in iatrogenic salt water drowning (20). The description of iatrogenic crystalloid induced multiple organ failure is not new (21). In an editorial published in 1967, Moore and Shires made a plea for “moderation” regarding fluid resuscitation requirements. In addition to altering cell structure and function and potentiating the inflammatory response (22), clinicians may not be cognizant of the adverse hemodynamic effects of crystalloids in patients with sepsis. Paradoxically in the setting of sepsis crystalloids act as vasodilators, decrease adrenergic responsiveness and increase capillary leakiness (23). Recently He and colleagues demonstrated that lung microcirculatory flow was reduced with fluid loading, with a significant increase in septal thickness (24).

The primary hemodynamic goal in patients with sepsis is to achieve a mean arterial pressure (MAP) >65–70 mmHg. This is best achieved by a physiologically guided, conservative fluid strategy followed by the early use of norepinephrine (25). Norepinephrine is a potent veno-constrictor, which increases the stressed blood volume, thereby increasing venous return and cardiac output. Apart from increasing venous return and arterial tone, unlike crystalloids, norepinephrine has been demonstrated to increase microcirculatory flow (26). Furthermore, we advocate for the early use of appropriate antibiotics and the early application of metabolic resuscitation (hydrocortisone, ascorbic acid and thiamine) (25). This revised approach to the early management of sepsis is summarized in Figure 1. 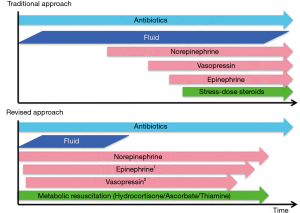 Figure 1 Paradigm change in the management of sepsis and septic shock. Reproduced with permission from Society of Critical Care Medicine and Wolters Kluwer Health, Inc. (25).

In summary, current evidence suggests that most of the increase in blood lactate in patients with severe sepsis is unrelated to poor tissue perfusion and is therefore unlikely to respond to iatrogenic attempts to increase oxygen delivery. Driving up oxygen delivery in septic patients with an increased blood lactate concentration will not increase oxygen consumption and is likely to increase the morbidity and mortality of these patients.