The probability of nodal metastasis in novel T-factor: the applicability of sublobar resection

A previous study indicated that tumors with ground glass opacity (GGO) on CT showed a favorable prognosis in comparison to tumors without GGO (pure-solid) (7). The radiologic GGO area of lung adenocarcinoma corresponds to the non-invasive area on pathological specimens (1,8), and a tumor accompanied by GGO may suggest the lining growth pattern in the alveolar space. In this sense, the biology of NSCLC tumors with and without GGO may be quite different. In the new version 8 staging system (9,10), the ground glass portion was finally omitted from the tumor diameter for the consideration of the T-factor. Thus, it is important to determine how the new T-factor should be applied when identifying candidates for sublobar resection.

Nodal metastasis is one of the most important prognostic factors for lung cancer (11,12), and surgical pathology sometimes reveals nodal metastasis in patients with clinical N0 NSCLC (13). The prognosis of patients with N2 remains poor with a 5-year survival rate of 37% (14). A previous report also emphasized the importance of a nodal survey, even when performing sublobar resection (6). In this study, the relationship between the new T-factor and nodal metastasis in peripheral small-sized lung cancer was examined with the aim of improving the selection of candidates for sublobar resection (wedge resection or segmentectomy).

The ethics committee of Chiba University Graduate School of Medicine approved this research (No. 2652 and 3033).

From January 2013 to October 2017, a consecutive series of 545 patients with cT1 or cTis lung cancer [TNM classification, 8th edition (9)] who were undergoing pulmonary resection was evaluated, and their clinical and pathological data were collected from a prospective surgical database that was maintained by our department. Patients with the following conditions were excluded from the analysis: non-peripheral type, induction treatment, clinical N1 or more, clinical M1, no nodal dissection, no available radiological imaging of thin-sliced computed tomography or fluorodeoxy glucose-positron emission tomography (FDG-PET).

The radiologic maximum size and location of tumors were defined by thin-sliced CT, which involved multi-dimensional slicing and reconstruction into axial, coronal, and sagittal views. The tumor location was also classified into three loci based on three-dimensional imaging: peripheral type was defined as being located in the outer third layer of the whole lung. The C/T ratio was calculated based on the measured maximum tumor size (including GGO) and the consolidation size. Accordingly, the tumor CT findings were assigned to one of the following three groups: pure GGO (C/T ratio =0%), mixed GGO (C/T ratio >0 to <100%, and solid-type (C/T ratio =100%). Clinical information was collected from database. These prospectively collected clinical and pathological data were retrospectively analyzed to investigate the relationships with the clinical T factor and the pathological N factor.

The frequency analysis was performed using the chi-squared test. Data were analyzed using the JMP software program (version 10, SAS Institute Inc., Cary, NC, USA). All P values were based on a two-tailed hypothesis test; P values of <0.05 were considered to indicate statistical significance. 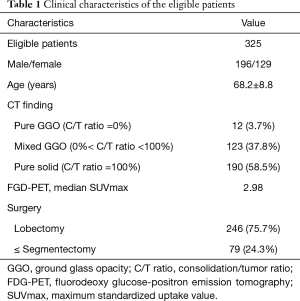 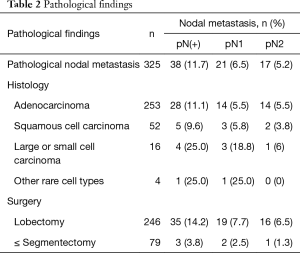 The clinical T factor and the pathological N factor 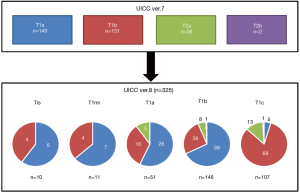 The prediction of pathological nodal metastasis in cT1b/c patients 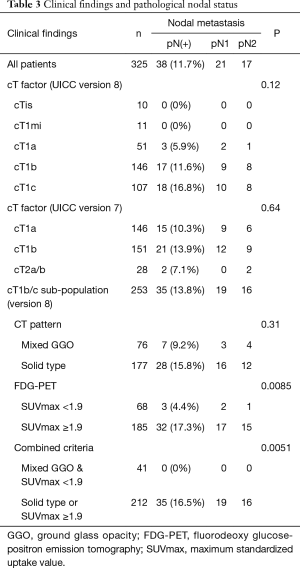 In this paper, we considered pathological nodal status to be a noteworthy factor when deciding the indications for intentionally limited surgery. Our data indicated some clinical clues for the assessment of patients for intentionally limited surgery. From the present study, cTis and cT1mi tumors are considered to show non-invasive radiological features with no nodal metastasis; thus, patients with these tumors are considered to be candidates for sublobar resection. On the other hand, T1a/b/c are assumed to include a relatively high proportion of invasive tumors. The proportions of patients with these types who showed nodal metastasis were as follows: cT1a (5.9%), cT1b (11.6%) and cT1c (16.8%). These results clearly indicate that the new TNM system of version 8 is still insufficient for predicting nodal metastasis; however, the consideration of the invasiveness of the tumor is reflected in the T factor by measuring the size of the solid component of tumor. We focused on the CT findings and SUVmax on FDG-PET. This clinical information can be obtained preoperatively and can be used in the indication for limited surgery. It was reported that the existence of a GGO component in the tumor might reflect less-invasiveness and a good overall prognosis (15); however, the analysis of the cT1b/c patients revealed that a solid CT appearance was not sufficient for excluding patients with potential nodal metastasis [80.0% (28/35), P=0.31]. FDG-PET is a strong tool for the qualitative and quantitative evaluation of the aggressive behavior of lung cancer, even though it shows a low positive predictive value for the diagnosis (16,17). The possible clinical application of FDG-PET in relation to decision-making with regard to the surgical strategy was previously reported in stage IA lung adenocarcinoma (18). Our data revealed that patients with lung cancer with nodal metastasis showed significantly high SUVmax (P=0.0118), but that it was not appropriate to apply the cutoff for the prediction of nodal metastasis, due to the low positive predictive value. Thus, we selected 1.9 as the negative predictive cutoff value (positive cutoff value for pN0), which excluded most cases involving nodal metastasis [91.4% (32/35) in cT1b/c cohort]. Accordingly, the combined criterion of the CT feature (mixed GGO type) and a SUVmax on FDG-PET (SUVmax <1.9) could eliminate all patients with nodal metastasis [100% (35/35) in the cT1b/c cohort], and may become an acceptable indication for the limited surgery. In this retrospective analysis, pathological nodal metastasis was seen in the cT1a/b/c cohort and metastasis was sometimes observed on N2 lesions.

A previous retrospective study on the indications for limited resection focused on non-small cell carcinoma, especially adenocarcinoma (19). In the clinical setting, however, it is often difficult to obtain a definite preoperative diagnosis of peripheral small lesions; then we cannot be sure that the objects of the present study are limited to adenocarcinoma. Our study revealed tumors with GGO observed in 52.6% of adenocarcinoma (133/253) and 3.9% of squamous cell carcinoma (2/52). Other all 20 lung cancers (small cell and large cell lung cancer) were of the solid type, which were not diagnosed preoperatively. Thus, special attention should be paid when performing limited resection for solid-type tumors and nodal dissection should be performed. 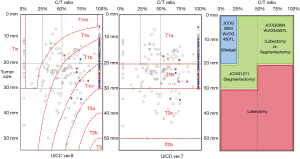 Figure 2 Distribution of T-factors version 7 and 8 in the coordinate panel of tumor size and C/T ratio. The panel shows pathological nodal metastasis status as pN0 (white circle), pN1 (red circle) and pN2 (blue circle) in version 8 (left panel) and version 7 (middle panel) according to the tumor size and C/T ratio. The x-axis shows the C/T ratio (a solid tumor has a C/T ratio of 100%). The y-axis shows the total tumor size (including the GGO area). The right panel indicates ongoing clinical trials of limited surgery for early lung cancer. The black dotted line on the left/middle panel indicates the ongoing criteria for limited surgery (corresponding to the right panel).

Interestingly, some patients in ongoing clinical trials of limited surgery for peripheral small-sized lung cancer (2) could also be allocated (right part of Figure 2). The JCOG0804/WJOG4507L trial is validating the efficacy of wedge resection (blue box) in T1a (version 7) patients with a C/T ratio <25%. This target population included patients with cTis and cT1mi (version 8), who—based on our results—would seem to be good candidates for sublobar resection; as no nodal metastasis was observed among such patients, complete resection could be achieved by wedge resection, as a sufficient surgical margin could be maintained. Recently, this was demonstrated by the final results of the JCOG0804/WJOG4507L trial (3). The JCOG0802/WJOG4607L trial focused on a C/T ratio of >50% in T1a (version 7) patients (right side of the green box) after the revision of the enrollment criteria in 2013. This phase III study compared lobectomy and segmentectomy. The cohort mainly consisted of patients with cT1mi/a/b. The point of the sub-cohorts was to include tumors with a C/T ratio of 100% as solid-type tumors, which sometimes show nodal metastasis. Our study suggests that not only the surgical margin but also an examination to detect lymph node metastasis (including an investigation of the mediastinal nodes) should be considered for patients with such tumors. The enrollment in this trial was completed in 2014. The JCOG1211 trial is a single-arm non-randomized confirmatory trial to validate the efficacy of segmentectomy in T1a (version 7) tumors with a C/T ratio of 25–50% and T1b (version 7) tumors with a C/T ratio <50% (left side of green box). As illustrated in Figure 2, this population is broadly spread from Tis, 1mi, 1a, and a small part of 1b. Importantly, our study indicated no nodal metastasis in these patients, and the previous investigation also indicated that tumors with a C/T ratio of <50% were less invasive (7). Moreover, patients with a C/T ratio of <50% were reported to show satisfactory prognoses (20). Enrollment in this trial was completed in 2015. Through our study, lung cancer with a total tumor diameter of >3 cm and C/T ratio of <50%, which would be classified as cT1a/b/c (left side of pink box), showed no nodal metastasis; thus, if a sufficient surgical margin can be ensured, such cases might become candidates for limited surgery.

Our study is associated with some study limitations. First, only 59.6% (325/545) of the cT1 or cTis patients were evaluated in this study. Our study’s target population was patients with early stage lung cancer. In this population, limited surgery is sometimes selected for reasons such as a poor respiratory function or due to the presence of severe comorbidities. Nodal dissection was omitted in some of the patients who were excluded. This selection bias could lead to the underestimation of the incidence of nodal metastasis. Second, 24.3% of the patients in the enrolled population underwent segmentectomy with nodal dissection. Hilar and mediastinal nodal dissection was performed in these cases, although limited surgery cannot prevent the occurrence of intrapulmonary nodal metastasis to “non-tumor bearing segment”. We previously reported that inter-segmental metastasis was a very rare event except in cases without hilar nodal metastasis (21); this hypothesis was investigated in cadaver study by other investigators (22). For the reasons mentioned above, we considered these limitations to be acceptable. Thirdly, this study is single institutional retrospective study. The patient selection, the determination of the operative method, and the surgical indications might have included biases. To overcome this limitation, a multi-institutional prospective study should be performed.

All authors have read and approved the final version of this manuscript. We sincerely thank all of the thoracic surgeons in the Department of General Thoracic Surgery, Chiba University Hospital, for their cooperation in data collection.

Conflicts of Interest: This data was presented at 25th European Conference on General Thoracic Surgery, Innsbruck, Austria, May 28-31, 2017.

Ethical Statement: The authors are accountable for all aspects of the work in ensuring that questions related to the accuracy or integrity of any part of the work are appropriately investigated and resolved. The ethics committee of Chiba University Graduate School of Medicine approved this research (No. 2652 and 3033).