It has been proven to be a feasible and safe procedure when performed by surgeons experienced with double-port technique and anterior thoracotomy (1,2) but there is no evidence whether it is possible to perform a direct transition from posterolateral thoracotomy to the single port with as satisfactory postoperative results as with the transition from multiport technique.

We retrospectively reviewed the files of patients on whom anatomical pulmonary resection via uniportal VATS was attempted between January 2012 and January 2014 in the Department of Thoracic Surgery of Asturias University Central Hospital by the unique surgeon with VATS experience in the department, assisted by residents of thoracic surgery (4). The approval for this study was provided by the institutional ethical review board of the said hospital, and all patients provided written informed consent before operation.

The preoperative assessment according to the protocol of the tumor board routinely included: blood test, bronchoscopy, thoracic computed tomography (CT), and pulmonary function performed by spirometry or additional functional test in high-risk patients. PET-CT was made in cases of N2 suggested by CT. We made two groups of patients for analysis: A—patients operated on in the first year of experience (January 2012 to December 2012), and B—patients operated on in the second part of experience (January 2013 to January 2014).

As reference data, we select the results published in the largest case-series in uniportal VATS major resection (3).

The indication criteria for uniportal VATS approach were the same as for open surgery except for lesions affecting chest wall or impossibility to extract without rib spreading.

The patients were positioned in lateral decubitus as for posterolateral thoracotomy. The lung blockade was obtained using a double lumen tube and continuous suction is applied to the non ventilated bronchus. A 4-5 cm incision was made in the 5th intercostal space. Rib retractor was not used in any case. A wound protector is used in some particular patients. A 10 mm/30° camera was used for vision. Some specific Scanlan instruments (ref 9009-738SC, 9009-828, 9009-240, 9909-225, 9909-227, 9909-920, 9909-203) was used in combination with standard VATS instruments.

Following specific technical recommendations for uniportal VATS, the hilar vessels and bronchus were dissected and transected in a particular order using stapler devices (ECHELON FLEX™) and clips (Hem-o-lok®). Fissureless technique was applied if absent or uncompleted fissures were found. No section of pulmonary ligament was made in any case. A special bag was used for the extraction of the resected lobe. Mediastinal lymph nodes were dissected completely. The intercostal spaces were infiltrated with bupivacaine in all cases. A 24F chest tube was positioned through the incision in the upper part of the pleural space.

All the data are reported as mean, median or frequencies, with associated interquartile ranges (IQR), 95% confidence intervals (CI), and P values calculated. Categorical data, both nominal and ordinal, were compared between groups using Fisher’s χ2 (exact) test. A probability value of less than 0.05 was considered to be statistically significant. SPSS, version 20.0 (IBM Corp) was used for the statistical analysis.

Of 82 patients, 76 (92.6%) were selected for resection because of a diagnosis of non-small lung cancer.

Comparisons between multiple variables with drain-time and hospital-stay-time are described in Table 2. 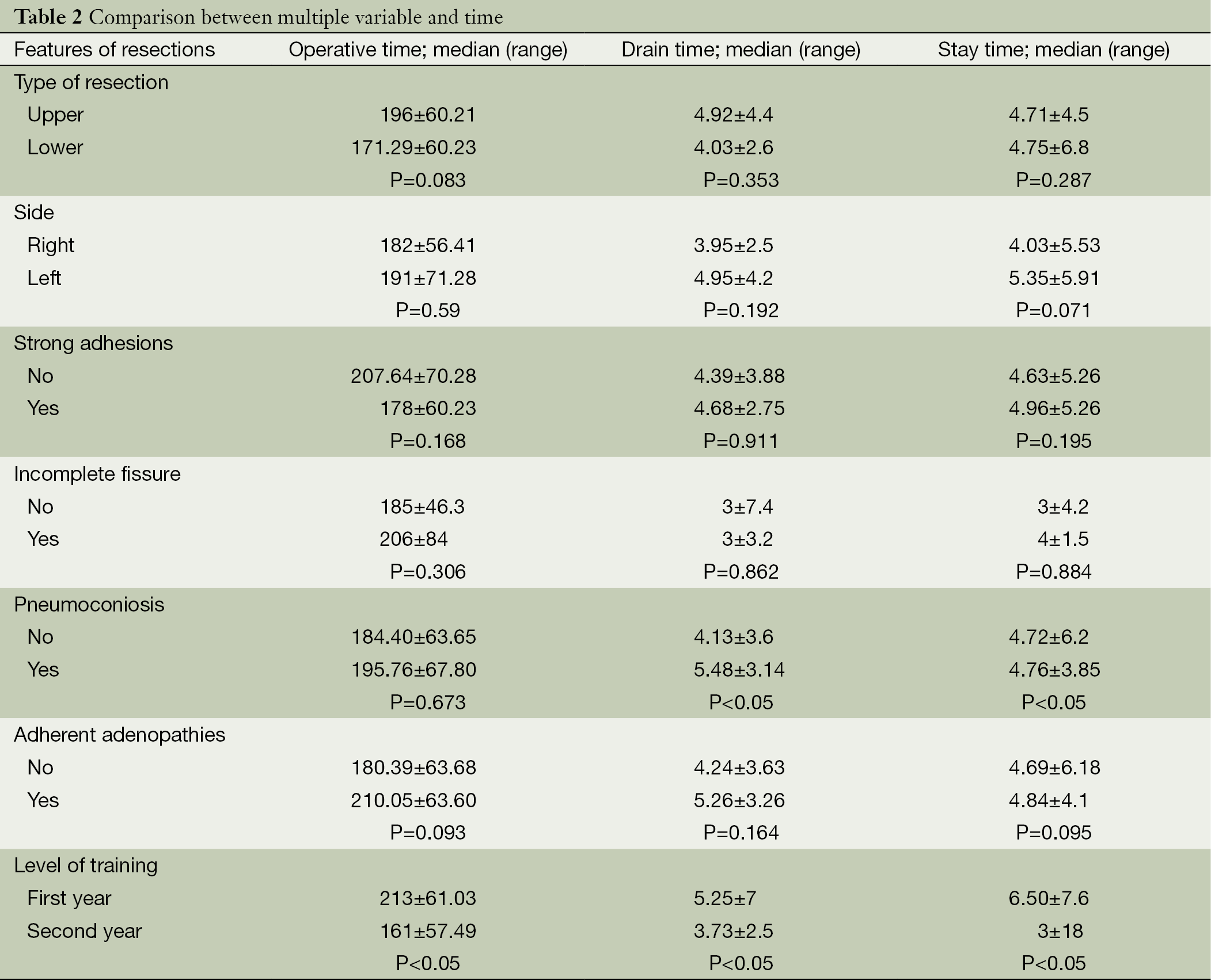 The most frequent intraoperative complication was bleeding in 10 (12.1%) patients (Table 3) but only 2 patients of group B had this complication. Conversion was required in 6 patients of group A and 2 patients of group B. Of the 82 patients 23 (28%) had some minor postoperative complication. Of these, chest tube reinsertion was the most frequently observed in ten patients of group A but only two patients of group B because a decreased incidence of postoperative residual pleural effusion (Table 4). There were 3 (3.65%) major complications, all of them in group B. In this group there were two perioperative deaths: (I) a right upper bilobectomy for a 5 cm long tumor in a 76-year-old man with preoperative FEV1 of 42% because of a pneumoconiosis with massive pulmonary fibrosis (the poorest pulmonary function in this study population) who died of respiratory failure on the 12th postoperative day. This patient was one of the four conversions to thoracotomy because of technical difficulties. (II) a left upper lobectomy in a 76-year-old man with high cardiovascular risk because of a triple coronary bypass, and previous right upper lobectomy with simultaneous left upper lobe wedge resection with adjuvant chemotherapy and radiotherapy treatment for synchronous lung cancer, with limited pulmonary function (preoperative FEV1: 70%) who died the day he was discharged from hospital after an optimal recovery because of a neurologic cause on the 8th postoperative day. 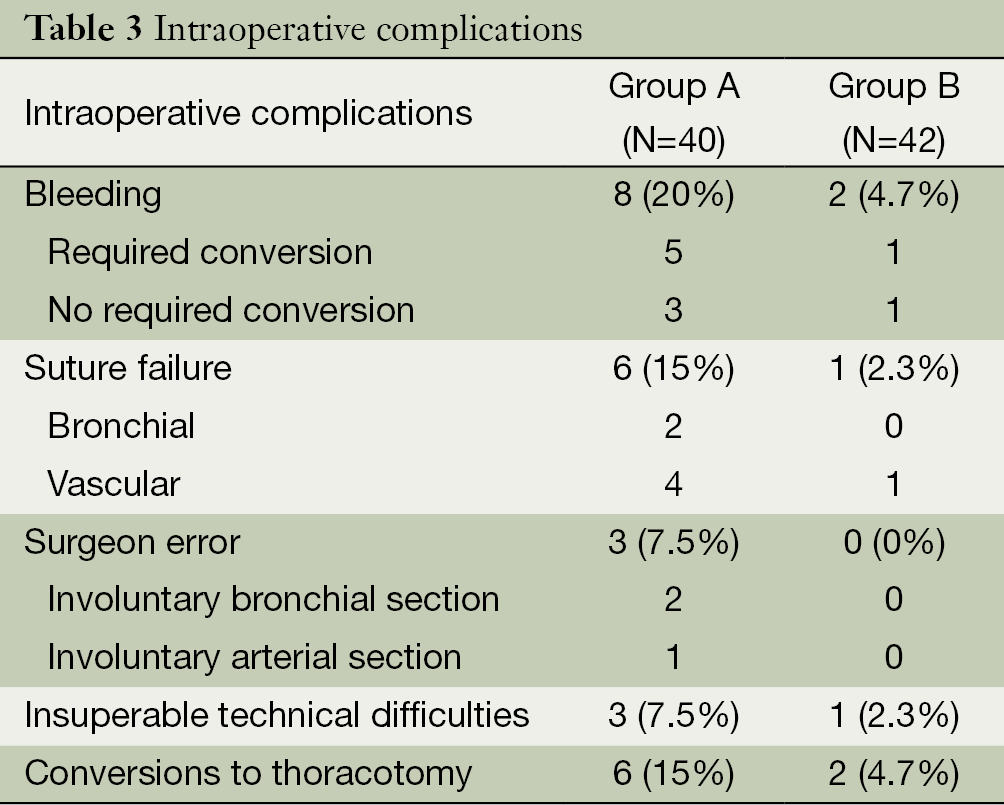 Relations between multiple variables with complications are outlined in Table 5. 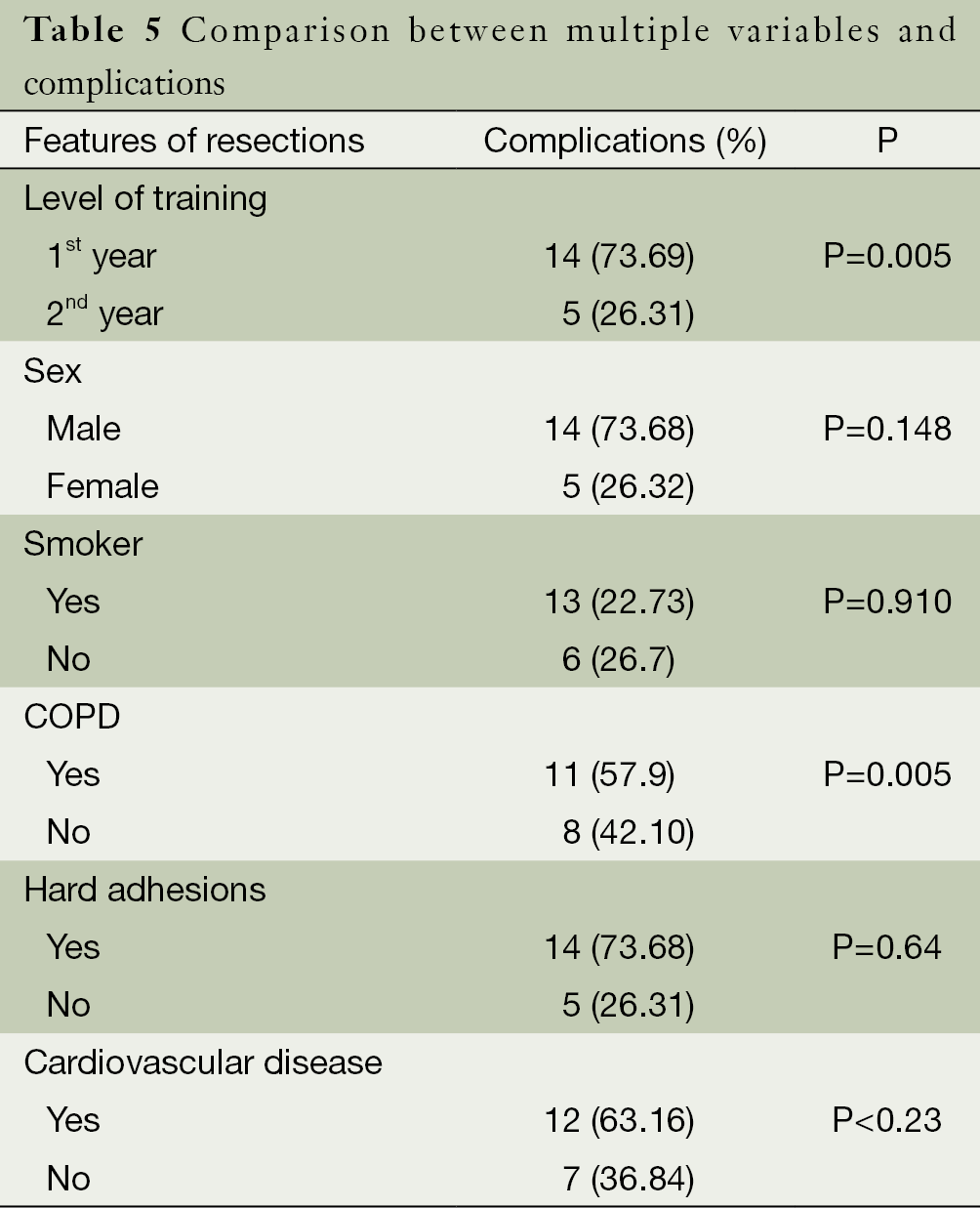 This technique has been proved to be a feasible and safe procedure when performed by surgeons experienced with double-port technique and anterior thoracotomy (1-3) but probably that particular experience is not really necessary to start a uniportal VATS program. We have hypothesized that a uniportal VATS program for major resections could be started with similar recommendations published by Petersen for a multiport VATS program (5,6): 1—large experience in open lobectomy; 2—experience in performing more than 100 minor VATS procedures; 3—attendance at formal courses in VATS lobectomy; 4—selection of the patients; 5—introduction of the element of resection step-by-step; and 6—making a prospective data collection.

A uniportal VATS program was implemented at Asturias University Central Hospital, in a direct transition from posterolateral thoracotomy by a single surgeon very experienced in posterolateral but not in anterior approach for open lung resections.

The analysis of data shows several differences between group A and B in terms of surgical time, postoperative drain time, hospital-stay-time, minor and major complications. Indeed, mean surgical time was reduced after the 40 first cases (group B) by 61 min. In a similar way, the median of postoperative drain time and hospital stay time was reduced by 1 day. Therefore, group B had similar postoperative outcomes to patients in the reference studies in those particular items. Minor complications in group B were also similar to the reference study except for a small increase rate in patients requiring reinsertion of chest tube (5%/3.2%). Major complications were found in 3.6% of patients but only in group B including two cases of 30 d-mortality in this group. In our study we included a considerable amount of relatively complex cases for initial VATS program. We found this reason responsible for increased rates of complications in both groups. Additionally, in the multivariable analysis, we found COPD and the level of training as the only significant factors for complications (P=0.05).

The results of the second part of our experience are in concordance to results of others authors and reference data except for 30 d-mortality (Table 6). However we found these deaths associated with an inadequate selection decision more than with a technique-related cause, because of an overestimation of the benefits of the technique in these patients. As a result, we consider that patient selection is crucial to prevent complications.

From the results of group B of patients we may consider that our learning curve from open surgery to uniportal VATS has required 40 resections. This is very similar to that reported for multiport technique (5,6). In this period of time we had no major complications and a very assumable rate of minor complications, so we found this transition feasible, safe and concordant with the transition from open surgery to multiport technique if patients are properly selected.

Our study has several limitations. Indeed, this is a small, retrospective and descriptive study of a single-surgeon’s practice. Reference data used for comparison include the global results of the two first years of experience. This can lead to underestimate the particular results of the second year of experience in comparison with our group B of patients.

Direct transition from open surgery to uniportal VATS for major pulmonary resections has been in our experience feasible and safe with good results. We founded this approach may be closer to conventional operation technique as compared to traditional thoracoscopic technique. It is probably important that the surgeon has to be very experienced in open resections and has completed more than 100 minor VATS procedures. Specific training courses with experts and proper patient selection process are also necessary. The number of procedures necessary to obtain appropriate experience may be similar to those reported for transition from open surgery to multiport technique. It is recommendable to be conscious that conversion to thoracotomy at the correct time during learning curve indicates prudence not failure. Until there are other similar experiences, our results should be interpreted with caution.