Does an imbalance in circulating vascular endothelial growth factors (VEGFs) cause atrial fibrillation in patients with valvular heart disease?

Atrial fibrillation (AF), one of the most prevalent cardiac arrhythmias, affects 2.5–3.5% of the population worldwide, and increases the overall and cardiovascular mortality of patients (1,2). Furthermore, AF is commonly associated with valvular heart disease (VHD), with VHD also present in 63.5% of AF patients in Europe (3). The outcomes of AF are not satisfactory, with neither medication nor ablation leading to sufficient resolution (4,5).

The pathophysiology of AF is highly complex, and the mechanisms underlying the initiation and maintenance of AF remain elusive (6,7). It is well known that AF occurs in the setting of hypertension, VHD, coronary artery disease, congenital heart disease, alcohol intake, and various other conditions. It is possible that different causes of AF may share common features, or that distinct mechanisms may lead to the same symptoms. It was found that the level of vascular endothelial growth factor (VEGF) is higher in the left atrium of paroxysmal AF patients versus healthy subjects, suggesting that the heart itself is the most likely source of VEGF (8). There is evidence that VEGF and VEGF receptor (VEGFR) mRNA are both expressed in heart tissue (9,10). Many pathological conditions, such as inflammation, oxygen deficiency, and pulsatile mechanical stretch, induce VEGF secretion (11). It was previously noted that elevated VEGF was often associated with angiotensin-2 (Ang-2) and von Willebrand factor (vWF), suggesting a possible link between abnormal endothelial damage/dysfunction and angiogenesis, which would contribute to the prothrombinase state in AF (12). It was also shown that VEGF could stimulate fibrosis within the atrial tissue (13). Evaluating the expression and balance between VEGFs and their receptors may represent a new paradigm in the study of AF.

We hypothesized that the VEGFs/sVEGFRs play an important role in the progression and maintenance of AF. In order to explore this hypothesis, we measured the plasma levels of VEGF-A, VEGF-C, sVEGFR-1 and sVEGFR-2 in VHD patients with persistent AF.

We recruited 80 patients with VHD who were admitted to the Department of Cardiac Surgery of The First Affiliated Hospital of Sun Yat-sen University in China between March 2015 and March 2017. Forty-nine VHD patients had persistent AF. Persistent AF was defined as AF that had persisted without interruption for 7 days or longer in patients receiving pharmacological intervention, or for whom electrical cardioversion was required to terminate the arrhythmia. Although there was some variation among patients, the disease severity was generally similar as assessed by their history of AF (all longer than 1 year) and the ultrasound findings. A total of 31 patients had sinus rhythm (SR). All of the patients had VHD, underwent a valve replacement procedure, and recovered well. We also recruited 20 subjects without VHD or any history of AF as a healthy control group. Each patient’s heart rhythm was determined by an electrocardiogram taken at the time of admission. VHD was diagnosis by ultrasonic cardiogram and a post-operation pathological examination.

The exclusion criteria included recent-onset acute cardiovascular or cerebrovascular events, trauma or surgery, coronary artery heart disease, malignancy, connective tissue disease, acute or chronic infection, and pulmonary, hepatic, or renal dysfunction. Patients who were receiving treatment with anti-inflammatory or steroid drugs were also excluded. A formal medical and drug history-taking was done for each enrolled patient. All patients received a physical examination and routine laboratory tests. This study was approved by the Ethics Committee of The First Affiliated Hospital of Sun Yat-sen University, and all patients enrolled in this study gave written informed consent.

Blood samples from both VHD patients and controls were obtained from the forearm veins using 6.0 mL vacutainer tubes (BD, Plymouth, UK) containing EDTA. The blood samples were immediately placed on ice before being centrifuged at 3,000 rpm for 10 minutes at 4 °C. Plasma samples were then stored at −80 °C until analysis. The plasma levels of sVEGFR-1, sVEGFR-2, VEGF-A, and VEGF-C were determined by enzyme-linked immunosorbent assays (Otsuka Pharmaceutical Co. Ltd., Tokyo, Japan).

Values are expressed as the mean [± standard deviation (SD)] numbers and percentages. Categorical data were compared using a chi-squared test, and two-sample t-tests and Mann-Whitney tests were used as appropriate for parametric and non-parametric continuous variables. A receiver-operating characteristic (ROC) curve analysis was used to calculate the area under the curve (AUC) for the ability of the variables to predict AF in VHD patients. Multiple logistic regression models were also performed to assess the ability to predict AF in VHD patients. Comparisons between groups were made using a one-way analysis of variance (one-way ANOVA). Correlations were determined using Pearson’s correlation or Spearman’s rank correlation method, as appropriate. A two-tailed P value <0.05 was considered statistically significant. Statistical analyses were performed with IBM SPSS 25.0 for Windows (IBM SPSS, Armonk, NY, USA).

The demographic and clinical characteristics of the study population, together with the laboratory findings, are presented in Table 1. The mean age, number of smokers, number of subjects with a history of hypertension or diabetes, and number of subjects receiving treatment with β-blockers or statins were significantly higher in the two groups of VHD patients than in the controls. The percentage of males and mean body mass index were not significantly different between the VHD patients and controls. 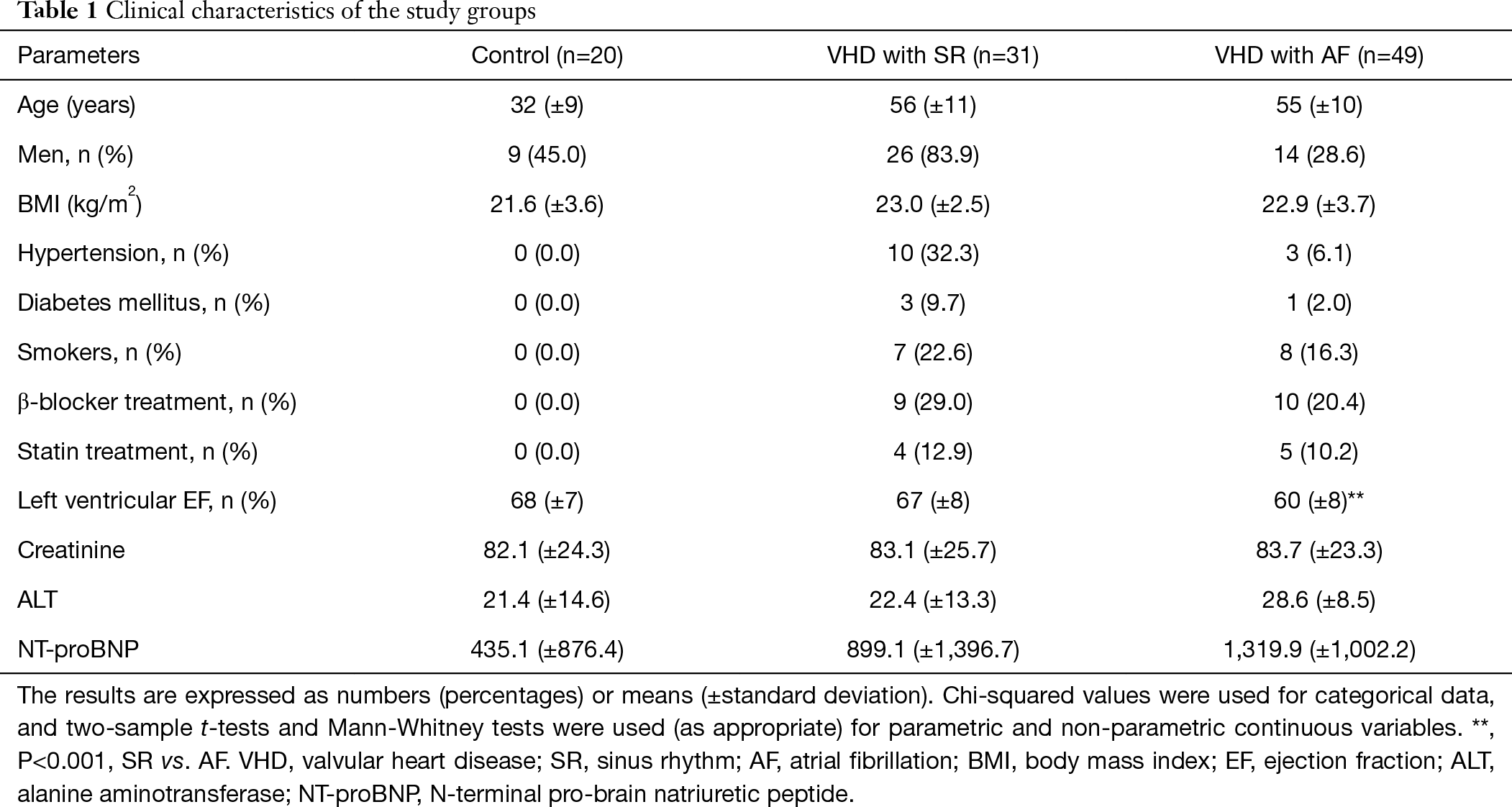 There were no significant differences between the SR and AF groups in terms of the sex ratio, mean body mass index, smoking status, history of hypertension or diabetes, treatment with β-blockers or statins, or in the creatinine and N-terminal pro-brain natriuretic peptide (NT-proBNP) levels. The left ventricular ejection fraction (EF) (%) was significantly higher in the SR patients than in the AF patients, which was expected given that AF can influence the ventricular systolic function. The alanine aminotransferase (ALT) level was significantly higher in the AF patients than in the SR patients. This may have been due to the decreased cardiac function and increased pulmonary circulatory pressure, which might have resulted in hepatic congestion.

The concentrations of VEGFs among the AF, SR and healthy control subjects

The concentrations of soluble VEGFRs among the subjects

Correlation of the VEGF-A, sVEGFR-1 and sVEGFR-2 levels with other clinical features

Why are the plasma levels of VEGF-A and sVEGFR-1 significantly elevated in AF patients?

This is the first study to demonstrate that there are differences in the plasma VEGF-A and sVEGFR-1 levels in VHD patients with and without AF. It is known that AF can cause endothelial dysfunction (18). Our results showing that the plasma levels of VEGF-A and sVEGFR-1 were significantly higher in AF patients suggests that endothelial dysfunction may be the cause of AF. The level of vWF, an indicator of endothelial damage or dysfunction, was previously found to be increased in AF patients, supporting the role of endothelial dysfunction in AF (19,20). Further, the proliferation of circulating endothelial progenitor cells (EPCs), which contribute to endothelium repair by replacing damaged endothelial cells, was significantly reduced in patients with permanent AF (21). Electrical remodeling, structural remodeling caused by aging, coronary artery disease, hypertensive heart disease, diabetes mellitus and inflammation have all been suggested to play important roles in the progression and maintenance of AF (22,23). The remodeling can be seen as atrial fibrosis (24). Further, many studies showed significantly increased secretion of VEGF, possibly originating from cardiac myocytes (8,12,25,26).

Hypoxia is known to upregulate VEGF via HIF-1α (27). AF can cause tissue hypoxia, and VEGF may ameliorate myocardial ischemia (28,29). Using left atrial appendage (LAA) samples obtained from 59 AF patients, Abe et al. (30) found that overexpression of HIF-1α may be involved in atrial myocardial fibrosis. Scridon et al. suggested that the secretion of VEGF in the left atrium is a transient event in the natural history of AF, where the spreading cardiac fibrosis would reduce the degree of pulsatile stretch and subsequently diminish the VEGF levels (8).

Although VEGF does not appear to play a direct role in angiogenesis or the vascular permeability in AF, some studies had shown that VEGF could stimulate the fibrosis process within the atrium and ventricle (31-34). It is known that soluble VEGFR-1 (sFlt-1) is an endogenous VEGF inhibitor. For example, sVEGFR-1 neutralizes VEGF-A, and is critical for maintaining the corneas devoid of blood vessels in the eyes (35). According to the literature, the sVEGFR-1 level is correlated with morbidity and mortality, and is a potent marker of disease severity in patients with sepsis or who are critically-ill (36). Our findings show that the plasma levels of VEGF-A and sVEGFR-1 are both increased in AF patients. While VEGF-A promotes angiogenesis, sVEGFR-1 can downregulate VEGFR signaling, mainly by trapping VEGF-A. This system may explain why AF is associated with endothelial dysfunction and fibrosis. However, more research is needed to explain why the expression levels of sVEGFR-1 are increased in patients with persistent AF.

The two most important complications of AF are thromboembolism and heart failure. In our study, we found that the plasma levels of VEGF-A and sVEGFR-1 were significantly elevated in AF patients, while the left ventricular EF (%) was significantly higher in the SR patients than the AF patients. Heart failure and AF often coexist and form a vicious cycle. Risk factors such as hypertension, diabetes and valvular disease may lead to AF, while AF can cause heart failure. However, heart failure is also a risk factor for AF, and the incidence of AF is directly related to the New York Heart Association (NYHA) classification. The incidence of AF in NYHA class I heart failure patients was less than 10%, while in NYHA IV patients, AF was present in more than 55% of cases. Moreover, severe heart failure can also increase the rate of AF (37-39). Our study shows that targeting VEGF-A and soluble VEGFR-1 may provide a new way to study the causes of AF, and may represent targets for treatment.

Why are the plasma levels of sVEGFR-2 decreased in AF patients?

This study is limited by its cross-sectional design. Thus, as an observational study, cause-effect relationships could not be established. Further prospective studies are necessary to confirm our present findings. The sample size of our study was also small, and did not include patients with isolated AF who didn’t have VHD. As a result, we were unable to rule out the effects of VHD on the findings. We also did not evaluate the changes in the plasma levels of sVEGFR-1, sVEGFR-2, VEGF-A and VEGF-C after valve replacement surgery. Future studies might examine whether the expression of these proteins is changed after surgery, and how the levels correlate with the response to valve replacement.

The present findings indicate that an imbalance in the VEGFs/sVEGFRs may contribute to AF, possibly by breaking the balance between angiogenesis and lymphangiogenesis. Although further studies are needed due to the small sample size and cross-sectional design of the present study, our findings suggest that these proteins may be involved in AF, and sVEGFR-2 may represent an important biomarker of AF.

Ethical Statement: The authors are accountable for all aspects of the work in ensuring that questions related to the accuracy or integrity of any part of the work are appropriately investigated and resolved. This study was approved by the Ethics Committee of The First Affiliated Hospital of Sun Yat-sen University {No. [2017]157}, and all patients enrolled in this study gave written informed consent.